I love it when readers comment on my blog posts. I love it when they add songs to lists, introduce me to new songs, remind me of songs I’d forgotten about. I love it even more when they write in and suggest themes for song lists.

Here, therefore, is a song list that arose out of a suggestion. Ashish—who has been reading my blog and commenting on it regularly—sent me a request: how about a post on ‘background songs’? Songs that are relevant to the storyline, but which nobody lip-synchs to? That was a thought that had come to my mind earlier as well, but Ashish’s mail spurred me on to actually compile that list. So here it is: ten songs that appear in films and are relevant to the story, but which nobody is shown actually singing. One important restriction that I placed on myself was that the song should not be a ‘credits song’—it should not play out during the credits. (That, because a credits song list could be a pretty good post in itself).

As always, these are from pre-70s films that I’ve seen (barring Pakeezah, which in my lexicon, doesn’t count as 70s, really), and are in no particular order.

Spoiler alert: Some of the following descriptions give away important plot points, so watch out.

1. Dekhi zamaane ki yaari (Kaagaz ke Phool, 1959): Kaagaz ke Phool had some absolutely superb songs—and the two very best (in my opinion) were both background songs: Waqt ne kiya kya haseen sitam, and Dekhi zamaane ki yaari. I was torn between the two, since both are favourites of mine, but finally settled on this one. ‘Sung’ not in one stretch but here and there, at important points of the film, Kaifi Azmi’s cynical lyrics capture the ephemerality of fame and wealth so brilliantly. The ragged, now-unknown Sinha Sahib, once the darling of the cinema industry but now reduced to looking for roles as an extra (and even those he cannot manage) looks back on a life where the world was his oyster, where crowds adored him. Now, old and broken, he has nobody—even the one person to whom he means something is separated from him by her fame.

I love the combination of SD Burman’s music, so slow at the beginning, rising up into a crescendo later—and Azmi’s lyrics. And Rafi’s voice, so full of feeling, so controlled and restrained at the start, so desperate at the end—“Kaagaz ke phool jahaan khilte hain, baith na un gulzaaron mein”… I did write at the beginning of this post that these songs were in no particular order, but this one has a very special place in my heart. It’s unforgettable.

2. Chal ri sajni ab kya soche (Bombai ka Babu, 1960): A wedding song, but with none of the uninhibited joy that seems to mark most shaadi ke gaane—because this is a bidaai song. The beautiful bride, leaving her parents’ home for her husband’s, hesitates on the doorstep, knowing just how much she is going to miss all of this: her loving parents, her friends, the very familiarity of the home and neighbourhood where she has grown up. And, will she not also remember the man whom the world knows as her long-lost-but-now returned brother, but whose secret she knows: that, far from being her brother, he is the man who killed her brother? And that he is in love with her—and she, too, is not completely devoid of feelings for him? A poignant song, and beautifully sung by Mukesh.

3. Chhodo kal ki baatein kal ki baat puraani (Hum Hindustani, 1960): When I’d done my post on my favourite Sunil Dutt songs, several people had commented: Why not Chhodo kal ki baatein? That’s quintessential Sunil Dutt! But no, I said: my list was for songs to which Sunil Dutt had lip-synched, and Sunil Dutt did not lip-synch to Chhodo kal ki baatein. No-one did. This catchy song (composed by Usha Khanna), celebrating a newly-independent India and charting out all that the country had to do to become modern plays in the background as we see a panorama of India’s achievements, past, present, and future. The Taj Mahal already built, the Taj Mahals we have to build. 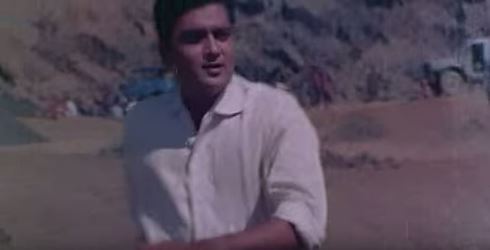 4. Preetam aan milo (Mr & Mrs 55, 1955): Preetam aan milo is one of those oft-used songs that crop up every now and then in old films (and sometimes, not in films either). CH Atma sang a Saigal-like rendition of it; Deven Verma sang a hilarious version in Angoor, in which the lyrics were totally lunatic—a world apart from the yearning-for-beloved poignancy of the original.

Mr & Mrs 55, too, had this song—a brief song, sung by Geeta Dutt when Madhubala’s character, having come to the realization that she really does love the husband whom she’s always suspected of having married her for mercenary reasons, goes rushing to the airport to stop him from leaving her. She finds that the plane has already left, and as she stands at the railing looking out onto the runway, crying, the song plays in the background. Hauntingly beautiful, inimitably Geeta Dutt.

5. Jhoom-jhoom dhalti raat (Kohraa, 1964): Based on Rebecca, Kohraa had two versions of Jhoom-jhoom dhalti raat: a sad, slow one which was picturized on Waheeda Rehman; and this, a slurring, almost intoxicated-sounding version. Neither version, interestingly, was lip-synched: both were background songs. The Waheeda Rehman version showed the naïve young bride, haunted by the looming shadows of her husband’s first wife. This version—which I prefer—shows what that first wife was really like: a woman obsessed with her own beauty, uncaring of society or morals. Faithless, perhaps also more than a little lonely. And understood only by the devoted maid (played by Lalita Pawar) who has looked after her, adored her, all her life.

6. Main jab bhi akeli hoti hoon (Dharmputra, 1961): Though Dharmputra—Shashi Kapoor’s first film as an adult—had plenty to recommend it (a good cast and a hard-hitting take on communalism, for instance) one element of it that I especially love is the score. N Dutta’s music and Sahir Ludhianvi’s lyrics combined to give this film some memorable songs—and of them all, my favourite is Main jab bhi akeli hoti hoon. A young woman, pregnant and separated from the lover who has been shooed away by her furious Nawab of a father, remembers the days past: every little memory of their shared love comes to her, tormenting her in her solitude. Beautiful words, beautiful music; and beautifully rendered by Asha. 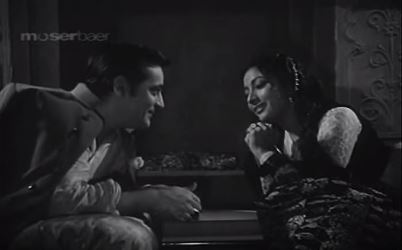 7. Chhupa lo yoon dil mein pyaar mera (Mamta, 1966): When he wrote in with his request for a post on background posts, Ashish tried to give an indication of what he meant: philosophical songs that have a bearing on the story, but aren’t lip-synched. When I started researching this post, I realized that not all background songs are philosophical ones—in fact, as you can see from the songs in this list, the tone of background songs runs all the way from romantic to introspective to patriotic to downright spooky. And (with the exception of Chhodo kal ki baatein, which has a chorus), most background songs that I like tend to be solos.

Not so Chhupa lo yoon dil mein pyaar mera, which is a lovely, poignant duet sung by Hemant and Lata. This is a love song with a difference: the two characters were once sweethearts, but their lives have changed. She is now married (and estranged); he, embittered by what he thought her faithlessness, has come to realize how wrong he was, and has taken on the task of looking after her daughter. They love each other still, but in that deep, mature, platonic way that is something more than the deepest of friendships yet not a forbidden love. A love, instead, that needs to be hidden away deep in the sanctum sanctorum of one’s heart.

8. Chalo dildaar chalo chaand ke paar chalo (Pakeezah, 1972): Yes, I do think of Pakeezah as an earlier film than the 70s—simply because it was so many years in the making, and if Kamal Amrohi and Meena Kumari hadn’t gone through the many upheavals in their relationship, it may well have been released years later. Pakeezah had simply sublime music (Ghulam Mohammad at his very best), and this sweetly romantic song is one of my favourites—and it’s a background song.

The two lovers have only now come face to face (though he has seen her—and admired her—while she was asleep on a train), and their love has blossomed, instantly. What follows is this song of going away, only the two of them, on a journey far away, with only their love to keep them company. I think the fact that the lovers don’t lip-synch to the song makes it more romantic than if they had been shown singing.

9. Mere mann ke diye (Parakh, 1960): This is the sort of song that comes automatically to my mind when I think of background songs: a song so deeply personal, so very private that the singer cannot have anyone listen to it, even by accident. A song that speaks of pain, of despair, of no light at the end of the tunnel: a darkness in which her only hope can be to somehow keep the flame within her own heart burning. A beautiful little song (Salil Choudhary’s music is wonderful, Shailendra’s lyrics are touching), and Lata—with very little in the way of instruments to either help her along (or drown her out!) sings it with so much feeling. Add to that, the picturization: a quietly sad Sadhana going about her little home, lighting the evening diya at the little shrine, looking up at the stars, trying to keep herself from breaking down.

10. Gumnaam hai koi (Gumnaam, 1965): Any proper Hindi ‘supernatural suspense’ film (by which I mean a story that seems supernatural at first glance—Woh Kaun Thi?, Bees Saal Baad, Mahal, Yeh Raat Phir Na Aayegi, etc—but actually has a good, old-fashioned crime-based explanation) always has a signature song. The song that’s sung by the spook (who is always female) intermittently through the film, especially at times of great stress for the leading characters. Gumnaam was no exception (even though the secret of the ‘supernatural’ element of it was revealed relatively early in the film).

Snatches of Gumnaam hai koi appear here and there in the film, and the last occurrence (only a line or so) does have someone lip-synching to it. But the first time you hear the song (which is also the only time you hear it in its entirety), there’s nobody to be seen singing it. A bunch of marooned travellers, finding themselves on a deserted island, walk through forest, ruins, an eerie-looking coconut plantation, and up rocks—and are followed throughout by this song, a song of doom and despair. Jo paida hua, woh faani hai: not really cheering.

Which songs would you have put into this list if you were compiling it?

135 thoughts on “Ten of my favourite ‘background songs’”