The last Hindi film I reviewed was a Bimal Roy production – and it left me feeling very disappointed. To get over that (and to remind myself that Bimal Roy’s films can generally be counted upon to be good), I decided to rewatch this one, an old favourite that reinforces Bimal Roy’s style of film-making: everyday stories of life, real life, with all its joys and sorrows and mundane happenings.

Parakh begins in a tiny village in the countryside. Radhanagar is typical rural India: there are the fields; the pond where the women come to draw water and gossip; the huts; the grand haveli of the zamindar; and the railway line that passes a few miles away.
It is from this railway line – with a train chugging off into the distance – that we first see Radhanagar’s postman, Haradhan (Motilal) lugging a sackful of mail back to the post office in the village.

Haradhan, despite his obviously down-at-heel appearance (he has a game leg, and his clothes are full of holes), is a cheerful man who shares an easy camaraderie with his boss, Nivaran Babu (Nasir Hussain), the postmaster of Radhanagar. In the course of a chat – while Haradhan sorts the mail and Nivaran stamps the letters – we discover that Haradhan has been the postman at the village for only a few months. And in those months, he’s never seen a letter come for Nivaran Babu. Why, he asks? Everybody receives letters, or money orders: how come Nivaran Babu never gets any mail?

Nivaran shrugs it off by saying that he’s small fry; why will anybody write to him? 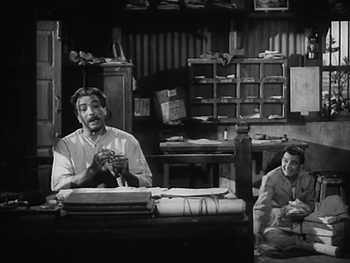 Next, we get to meet some of the other people in the village. There’s Nivaran Babu’s wife (Leela Chitnis), who seems to be pretty sickly and spends much of her time lying and groaning in bed.
Her offspring include a little son and two daughters. The elder daughter’s wedding, three years earlier, has resulted in Nivaran Babu being in debt to the tune of over Rs 2,000. The moneylender has now decided to call in the law, and Nivaran Babu is very worried because there’s no way he’s going to be able to pay off the debt.

Nivaran Babu’s younger daughter Seema (Sadhana, in one of her earliest roles) is still unmarried and lives with them. She, like all of Nivaran’s household, is very attached to Haradhan – he is ‘chaacha’ (uncle) to her, and her affection for this postman, who always appreciates her cooking (he eats at their house), is sweet.

Seema is in love with Professor Rajat Sen (Vasant Choudhary).

Rajat is the village school teacher, an earnest young man who tries his hardest to improve the lot of the villagers. It’s an uphill battle, because the only people around who have the money to do anything are the very ones who are too greedy to spend their money on philanthropy. So Rajat invariably ends up leading a group of his students into projects where their labour will be useful…

…like silting up a stagnant pond that is likely to be a breeding ground for mosquitoes.
This brings Rajat up against the hard-of-hearing, wealthy, and unprincipled Bhanju Babu (Asit Sen), who owns the land around the pond. Bhanju Babu is miffed at Rajat’s attempts to fill up the pond. He still doesn’t know that Rajat and Seema are in love with each other; that will come as an even greater blow, since Bhanju Babu has an eye on Seema for himself.

Encouraging Bhanju Babu in his endeavours to woo Seema is the slimy village priest, Tarkalankar (Kanhaiyalal). Tarkalankar has been advising Bhaju Babu to offer to pay off Nivaran’s debt in exchange for Seema’s hand in marriage. This sordid exchange has been proposed to Nivaran, and he has turned it down curtly, but Seema’s mother is inclined to agree to the match. At least Seema will live in comfort, she says.

In the midst of this, one day, a surprise. A letter arrives for Nivaran. Nivaran is pretty certain that it’s just the legal notice he’d been expecting; but Haradhan urges him on to open it, and at least have a look…

… and Nivaran Babu gets a shock.

The letter is from a stranger named Sir Jagdish Chandra ‘JC’ Roy. JC. Roy originally belonged to a family from Radhanagar, but about thirty years earlier, when JC Roy was a child, his parents left the village and migrated to the city. In the city, JC Roy’s father prospered and made a fortune. He is now dead, but JC Roy’s mother has decided she wants to donate Rs 5 lakhs for the development of Radhanagar.

And that isn’t all; enclosed, along with the letter, is a cheque for the full amount.
Now comes Nivaran Babu’s role in all of this. JC Roy and his mother think the postmaster of Radhanagar would know the inhabitants of the village best, so they’ve decided he should be the one to decide the most trustworthy representative of Radhanagar.

Nivaran Babu is flabbergasted. This is all too great a responsibility. So he scurries off to the large haveli of the local zamindar, Taandav Tarafdar (Jayant).

At the zamindar’s haveli, Nivaran Babu mentions that he’s received a letter, but does not explain what it’s about. He merely requests an audience – along with four other prominent residents of the village – later that evening. Taandav agrees, in a somewhat supercilious way… 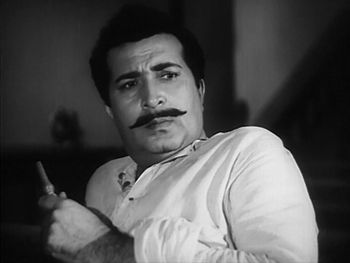 …and that evening, Nivaran Babu, at Taandav’s haveli, reveals the letter. Present are Taandav himself; Bhanju Babu, the temple priest, the school teacher Rajat Sen, and the local doctor (Rashid Khan).
The immediate reaction of the majority is that Taandav, being the zamindar, should be given the money. Rajat, however, intervenes. JC Roy’s letter states categorically that the most capable and most honest man of Radhanagar is to receive the money. How will that be decided?

Rajat suggests a democratic solution: at the end of the month – 25 days from now – an election should be held. All the villagers should vote for whom they feel most worthy of taking charge of the Rs 5 lakhs.
Willy-nilly (since all the ‘great men’ gathered around privately think each of them is the only worthy inheritor of that wealth), they agree.

And then begins the fun. Doctor sahib and his compounder Keshto (Keshto Mukherjee), who have all along been squeezing every last anna out of the poorest of the villagers – down to refusing to treat people if they don’t have money – change their clinic to a charitable one. All poor people will be treated free of cost, proclaims the doctor. He even goes on special rounds, out of his way, to see the very ill daughter of a low caste man whom he’d shoved out of the clinic just before the letter arrived.

The others – Bhanju Babu, the priest, and the zamindar – are quick to follow suit. Within a few hours, Bhanju Babu is overseeing the digging of a tube well. The priest (when he’s not praying fervently for the money to fall into his lap) is warmly welcoming, into the temple, lower caste worshippers whom he’d earlied scorned and scolded… 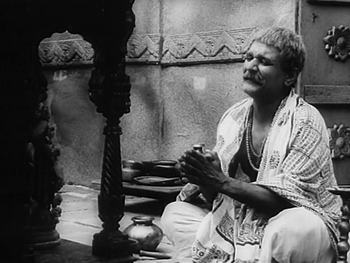 …and the zamindar has made a landmark announcement: he is giving up his claim to Rs 10,000 worth of taxes that the poor villagers have not been able to pay. When a peasant tells the zamindar that they don’t even have the money to buy seed to plant more than one field, the zamindar even instructs his steward to have seed bought and distributed to the peasants.

And the zamindar’s glamorous young sister-in-law, Ajanta (Nishi Kohli), who’s just arrived from the city (and has taken a liking to Rajat) realises that if her brother-in-law wins, he can finance a trip to America for her. So Ajanta too joins the battle, advising the zamindar on how he can best hope to woo the people of Radhanagar.

In the meantime, Nivaran Babu’s assistant, the postman Haradhan, has taken leave and gone to visit his mother (Durga Khote). And we, the audience, are made privy to a secret the people of Radhanagar don’t know: that Haradhan is, in reality, the Sir JC Roy who had sent that letter to Nivaran Babu.

How will this play out? Who will win the election? Will the poor of Radhanagar get their due, or will it all be just a way for one of these men – Bhanju Babu, Taandav Tarafdar, the doctor, and the priest Tarkalankar (not to mention Rajat, who has also been nominated) to lay their hands on the money?

Parakh is vintage Bimal Roy: a prime example of the sort of film Roy was so good at creating. The people here are not the larger-than-life characters that dwell only onscreen; they’re people you can identify with, with dilemmas you can understand, weaknesses and flaws you can relate to. It’s never terribly tragic; nobody is an outright villain (or at least they’re villains in the “bullies are cowards at heart” way); and the happinesses are the small things – the hot cup of tea, for instance, that Nivaran Babu asks for only when he has something very special to celebrate.

There is humour (mostly satirical); there is romance (and that too the sweet, friendly type, not the stalker-ish behaviour that was becoming so popular in Hindi cinema by 1960); and there is a neat little lesson about the ills of corruption.

The acting, the direction, the cinematography, the story (by Salil Choudhary). And the gently sarcastic way in which Bimal Roy manages to tell the story of temptation and how it works on people: the lengths people will go to for gain, for example. All at a level we can see.

But it’s also, eventually, a reflection of what happens at a higher level: in state-level, national, or even international politics, where vast sums are given out, ostensibly for development – but where do they go? Not that Bimal Roy talks about that, but the story that takes place in Radhanagar is, after all, the story of India too. Perhaps the story of any community in the world.

The music. Salil Choudhary is one of my favourite music directors, and while Parakh doesn’t have too many songs (unlike, say, Madhumati), it does contain one of my favourite Salilda songs: the lovely O sajna barkha bahaar aayi. Two other especially good songs from the film are Mila hai kisi ka jhumka, and Mere mann ke diye. The latter two also are notable for their wonderful lyrics, by Shailendra (who also wrote the dialogues of Parakh).

Sadhana. One of my all-time favourite actresses, and so very pretty in a girl-next-door way here. 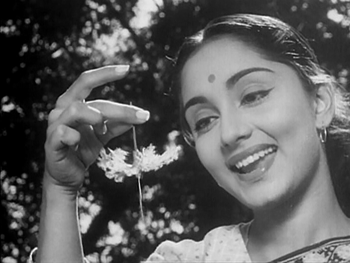 And, because I could not possibly put it better than Banno has, here’s a brief blog post from her that brilliantly shows one of Parakh’s greatest strengths: its ability to show so much with so little.

There’s nothing I’d say I disliked about Parakh, but I’d have been happier with someone other than Vasant Choudhary playing Rajat. He isn’t bad, but he didn’t quite float my boat.

And the introduction of Ajanta (a short-lived story, as it turned out) could’ve been done without. It seemed like a deliberate insertion of glamour, and the chance to put in a nautanki song. Again, not bad, but dispensable.

So much to like, and nothing to really dislike? That’s why I’ve seen this film more than once. And will see it again.