Some definitions that came to my mind, having—over the course of a little over thirty years—watched three versions of the same story:

Nostalgia. A feeling of deep, intense longing for a film you saw in your childhood, and of which you remember nothing except the vague outline of a story.

Serendipity. Searching for a film you know next to nothing about, and finding an earlier version that turns out to be even better than the one you recall seeing.

Double delight. Finding yet another version of a much-loved film, and discovering that this one is just as good as the other versions.

The point being that Shijibganeun Nal, about which I raved so ecstatically a couple of years back on this blog, turned out to have been only the earliest (as far as I know) cinematic adaptation of a comic play about a greedy country gentleman, a quiet and upright maidservant, and a young nobleman. I had originally seen the 1977 version of this film on Doordarshan three decades ago; I found and watched (with much enjoyment) the award-winning 1956 version some time back; and then, the other day, I came across this version (the name of which translates as ‘A Happy Day for Maeng Jinsa’) on Youtube. And how could I resist watching it all over again? 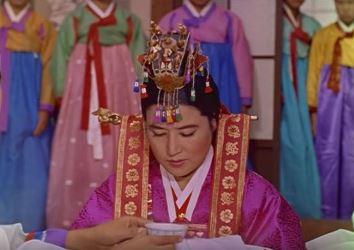 Since I have explained the story in detail in my review of Shijibganeun Nal (and it remains the same, in its basics), I’ll get through with it in a quick summary, here. The pampered Gap-bun (Lee Bin-Hwa) is the 19-year old daughter of a country gentleman named Maeng Jinsa (the delightful Kim Sung-Ho). Maeng Jinsa lives with his wife, his old and very senile father, and a household of servants, of whom one is the orphan Ip-Bun (Choi Eun-Hee). Ip-Bun, though she’s been brought up along with Gap-Bun, is a maidservant.

Maeng Jinsa, wanting to arrange a marriage for Gap-Bun, finds a suitable family: Minister Kim, from Bellflower Village, is looking for a wife for his son Mi-Eon (Kim Jin-Kyu). Maeng Jinsa goes there with his steward, Park Chambong , but gets so nervous that he doesn’t even enter the house, sending Chambong inside instead. Chambong too sees only the servants’ rooms and sheds, and comes out.

But, somehow, the wedding is fixed (all without having seen the groom) and Maeng Jinsa and his wife and daughter rejoice at the rich wedding presents that arrive at their home from Minister Kim’s. 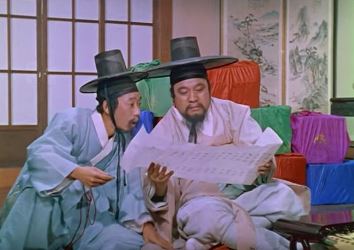 Soon after, though, something happens to send Maeng Jinsa and his family into a tizzy. A traveler, a scholar from Bellflower Village, stops by and asks for shelter for a few days. The mere fact that he’s from Maeng Jinsa’s future in-laws’ village makes Maeng Jinsa accommodate him. While he’s there, the man lets drop a secret: that Mi-Eon, while he is wise and a fine calligrapher and good-looking, is also a cripple. One leg is shorter than the other.

After many deliberations with his extended family of men (all of whom smoke their pipes and can come to no conclusion, except that it wouldn’t do for Gap-Bun to marry a cripple, and yet, it would be a serious breach of etiquette to break off the engagement), Maeng Jinsa has a brainwave. Send Gap-Bun off secretly somewhere else, pass Ip-Bun off as Gap-Bun, and have her marry the cripple instead.

And so a protesting Ip-Bun, horrified at this deception, is made ready to marry a groom she has never seen and yet feels sorry for, because he must be such a lonely man…

What I liked about this film, what I didn’t like, and some comparisons:

I liked almost everything about it. The story is pretty much like a fairytale: the good but poor and put-upon heroine finds true love, good is rewarded and evil is punished (or at least gets its comeuppance), all is well. What stops Maengjinsadaek Gyeongsa (and not just this version of it, but the 1956 version as well) from being irritatingly preachy is the humour in it. Maeng Jinsa, his decrepit old father, and Park Chambong, in particular, are hilarious.

Maeng Jinsa’s attempts (even though he’s well aware that his old Abeoji, besides being quite deaf, is senile) to keep him abreast of developments lead to some hilarious misunderstandings, for one. And Maeng Jinsa’s hurry to get the family tree spruced up a bit—there are some embarrassingly low professions in it, what with one ancestor having sold odds and ends, while another had a shop where he sold liquor bowls—are also very funny, especially as they have that amazing quality of being something so many of us can identify with. This isn’t a Korean thing from the Joseon period; it can be anywhere, everywhere, in any time, this eagerness to show off, to pretend to be something we’re not, to keep up with the Joneses (or, in this case, the Kims).

This ‘universality’ (which I’ve talked about in some other films too, which makes them easy to relate to, even by people unfamiliar with the culture) is a major factor in the likeability of Maengjinsadaek Gyeongsa.  The theme, the characters, the plot, down to relatively minor elements (the crowing over the expensive wedding presents, the attempts to deceive a world which is already well aware of what is going on, the local gossip): all are familiar, even if here they’re set in a different space and a different time.

Before I move on to a comparison with Shijibganeun Nal, two more things about Maengjinsadaek Gyeongsa that I liked a lot. One, the beauty of it all, the landscapes and the cinematography. And, the song that is sung by the village girls, Gap-Bun’s companions, to both greet and tease her about her upcoming wedding. The music is lovely, the dancing is elegant, and the setting—with some girls on a swing, the others dancing and singing—is beautiful. 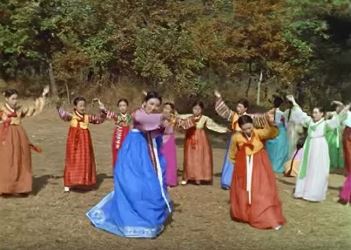 When it comes to comparing the two films, there is, at the basic level, the difference between a black-and-white film and a colour one. While Maengjinsadaek Gyeongsa has all the glorious gorgeousness of colour, I must admit to being more taken by the black-and-white of Shijibganeun Nal: there’s a subtlety and a certain charm to it that the later film lacks.

This comes through in the characterization as well: Maengjinsadaek Gyeongsa is more rambunctious, more inclined to unmistakable emotions and traits. Gap-Bun here is more obviously the pampered and childish girl, not the merely spoilt but otherwise sweet young woman of Shijibganeun Nal, and it’s the same with the depiction of her mother. Ip-Bun, in both films, manages to be a similar character: sweet, good, but no push-over either.

It is in the overall feel that the two films differ. The colour film emphasizes the humour of the plot, in a less subtle way, with the fun becoming slapstick at times. The older film is quieter, its humour more subdued.

Where I found Maengjinsadaek Gyeongsa winning was in the logic that is built into the plot. The story, as shown in Shijibganeun Nal (I haven’t read the play, so can’t comment on whether or not this was part of the original story), has the ‘scholar from Bellflower Village’ coming, all on his own, to check out the Maeng household and starting that rumour about Mi-Eon being crippled. In Maengjinsadaek Gyeongsa, the scholar comes to the village, and as he’s going by the river, he happens to have a brief conversation with the local wise man/fisherman, ‘the Bellflower Man’, who remarks that Minister Kim has made a mistake in choosing Gap-Bun as a daughter-in-law. This provides the impetus to the ‘scholar’, making him suspicious.

Also, while in Shijibganeun Nal the idea of passing off Ip-Bun as Gap-Bun occurs out of the blue, in Maengjinsadaek Gyeongsa, there’s a very specific reason for it. Maeng Jinsa, frustrated and out of his wits with worry, is wandering along the river when a villager tries to make fun of Maeng Jinsa’s quandary. He dances about, pretending to limp, and ends—when Maeng Jinsa loses his temper—by giving Maeng Jinsa a piece of advice: substitute Gap-Bun with Ip-Bun.

If I were asked to choose between the two films, I couldn’t say which I liked more. The humour, the ‘logic’, and the music of the 1962 film makes it worth a watch, and the slightly better characterization, the more subtle humour of the 1956 film make it good.

My suggestion? Watch both of them and see for yourself. And if you can’t watch both, at least watch this one (Youtube link here). This is a story worth seeing.