I remember watching Padosan as a child, and I remember my sister saying, “How could someone so handsome consent to be made up as someone like Bhola? And to act so silly?” I already liked Sunil Dutt a good deal, but that comment made me sit up and respect him a lot more than I already did. In a period when there was a very definite idea of what a ‘hero’ should be like (and the 60s was a decade where heroes tended to be more cookie-cutter than in the 50s), Sunil Dutt did roles that ranged from a man having an affair with another man’s wife (Gumraah), a dacoit (Mujhe Jeene Do), a buffoon (Padosan), a cuckold (Yeh Raaste Hain Pyaar Ke)… and in a slew of everything from suspense films (Mera Saaya, Humraaz) to family melodramas (Milan, Meherbaan, Khaandaan, etc).

Versatile, unafraid of experimenting—and a man, too, who seems to have worked in several films that focused on social reform. In Nartakee, for instance, where his character is that of a college lecturer, Nirmal, who comes in contact with a reluctant nautch girl who would much rather learn how to read and write than dance and sing for patrons.

Nartakee begins in a college where Seth Jamnadas (Om Prakash) is in a meeting of the managing committee. The college principal (Moni Chatterjee) and one of the professors, Mr Verma (Nana Palsikar) are in the forefront of trying to convince Sethji—who provides the money for this venture—that they do need more staff, even if that means more of an expense. Jamnadas is convinced only after much pandering to his ego.

The new lecturer who arrives, Nirmal, faces some initial ragging from the students, but his matter of fact way of dealing with the caricature drawn on the blackboard, and his admittance that he, too, got up to pranks like this when he was in college makes him quickly accepted. One of the students is Azad (Agha, whose obviously well-beyond-undergrad-age is accounted for by having him be a repeat student: he has failed in this class for the past nine years), and Azad is especially well-disposed towards Nirmal.

Not so with Ratna Jamnadas (Zeb Rehman), who flounces in late, doesn’t even ask for permission to enter, and is generally rude and sulky. Nirmal realizes who she is, and soon (but politely) puts her in her place. Ratna flees the classroom in a fit of humiliated rage.

… but when Nirmal, summoned by her father, comes to their house the next day, he makes it quite clear to Seth Jamnadas that his position doesn’t cut any ice with Nirmal as far as Ratna—a mere student, no more, to him—is concerned. Seth Jamnadas is sufficiently cowed to not argue further. 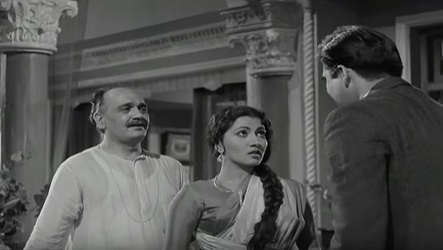 In the meantime, we are introduced to the nartakee, the eponymous dancer. This is Lakshmi (Nanda), the star singer and dancer of a kotha run by a bossy madam whom everybody (including Lakshmi herself) refers to as Mausi. Mausi goes off every morning to worship at the river, to do darshan at the temple, and generally put on a great show of piety, but she fools nobody; everyone knows just who she is.

Mausi is not just an exploitative madam, she’s also vicious and nasty when it comes to Lakshmi’s love for books and learning. Lakshmi can barely spell her way through a children’s primer, and dearly wants to study, but Mausi, far from letting her go to school, has even forbidden her to read the primers she’s managed to lay her hands on. One evening, as soon as her performance is over, Lakshmi races off to her room to bury her nose in her primer, and Mausi, following, snatches it from her hand and throws it off the balcony. 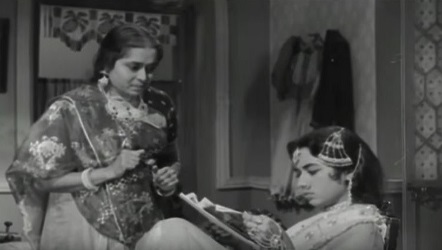 Nirmal, who’s come to the neighbourhood, attracted by Lakshmi’s song, sees the book fall, and retrieving it, takes it up to the kotha. Here, he gets shooed off by Mausi when she discovers what his motive—academic rather than lecherous—is. Also, since a desperate Lakshmi comes rushing to take the book, he gets a glimpse of her.

This glimpse helps Nirmal recognize Lakshmi the next day, when she turns up at his college [why Lakshmi decides to try her luck at a college instead of a school is beyond me; even if Mausi has already dragged her away from one school where she’s tried to get admission, it doesn’t mean that Lakshmi is now eligible for college]. Lakshmi’s deer-in-headlights stint at the college is embarrassing; the principal keeps seeing her as she rushes about the corridors, and keeps telling her to get to class; and when she ducks into a classroom, she’s soon found out as being not just an interloper but a near-illiterate one too. Humiliated and mortified, Lakshmi goes running out, tries to avoid the principal [doesn’t this man have an office to go to, or does he keep roaming the corridors of the college all day long?]—and falls down the stairs.

Fortunately for Lakshmi, Nirmal is passing by, and (along with others) comes to her aid. He recognizes her, and admits it, but doesn’t say who she is. He helps get her to a doctor, and patched up. Lakshmi is very grateful, and when she discovers that  Nirmal also has a night school (he’s set up one, along with his student-and-now-friend Azad), she decides to join.

Soon, Lakshmi can do more than just spell her way through books. She’s learning, and as her learning progresses, the relationship between her and Nirmal too changes subtly. It is soon obvious that Lakshmi is devoted to him, and that Nirmal too feels a certain sense of belonging. 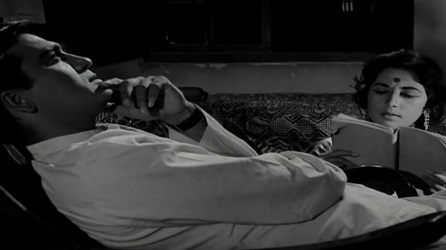 That doesn’t make Nirmal oblivious, however, to the fact that the neighbours are beginning to whisper (after all, Lakshmi’s is a well-known face; if she’s going into Nirmal’s house every night, what can it possibly be for?)… and that Seth Jamnadas’s daughter Ratna, after that first disastrous encounter with Nirmal in their classroom, has by now fallen in love with the handsome young lecturer. 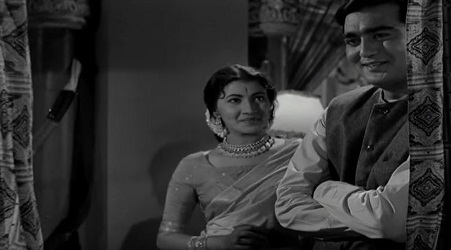 Where will the nartakee and the lecturer end up? Together, or not? How will their differences (which not they, but society, impose) be removed, if at all possible?

The simplicity of it. While the credits rolled, I spotted Bimal Roy’s name as the editor, who, as a blog reader informs me, isn’t the Bimal Roy of Madhumati and Prem Patra fame. Its director was another Bengali, Nitin Bose, and the story had elements of the sort of film for which Bengali directors like Bimal Roy and Hrishikesh Mukherjee were to win acclaim: a simple, down-to-earth story with nuanced characters, and almost nobody who can be classified as an outright villain. Even the people who are set up, within the first half of the film to appear inimical to the growing love between Nirmal and Lakshmi, end up not being all bad.

Ratna, for instance, the spoiled wealthy girl who can have a hold over Nirmal (her father, after all, has enough clout to—if he wishes—get Nirmal fired). In your more run-of-the-mill masala film, Ratna would end up being the nasty other woman who does all she can to break up the Nirmal-Lakshmi jodi. In Nartakee, however, Ratna has the grace to realize that the man she loves loves another woman, and she steps away without coming in their way. Instead, she actually wishes them well and gifts Lakshmi a valuable heirloom).

Secondly, even when people are shown to do reprehensible things, the motive behind that is eventually revealed—and it invariably proves to be a plausible reason. Professor Verma, for instance, is in dire straits because his wife is dying of cancer and he has five children (including two adult daughters to be married off). Mausi, like Lakshmi, had, in her youth eloped with a wealthy young man—who, finally unable to tolerate ostracization any more, had committed suicide; because of that experience, she has become embittered and has lost all faith in love and marriage.

The way the romance between Lakshmi and Nirmal progresses is also refreshingly believable. It’s not as if he falls in love despite himself or because of any misunderstanding about her identity. Nirmal knows full well who Lakshmi is, and his interest in her is initially mere compassion for someone who wants so much to learn but is not allowed to. On her part, Lakshmi initially sees Nirmal only as a teacher, a guru; it is when she begins to get to know him better, sees that he does not treat her with either the disdain or the lechery that she encounters in others, that she begins to fall in love with him.

This love doesn’t come like a bolt out of the blue, and (considering the way everybody seems to be ranged against them), it isn’t a ‘let’s proclaim it to the world’ sort of romance: it’s quiet, comforting, a deep affection rather than a mad passion. And, it’s shown in one of the most touching scenes of the film, when a richly clad Lakshmi, in zari sari and heavy jewellery, brings dinner for Nirmal to eat. As she’s leaving, he tells her, gently, that she looks lovelier in simple clothes. Lakshmi’s eyes fill when she turns back to him and says, everybody tells me to dress flashily (“bhadkeele kapde” is the phrase she uses); he’s the only one so far to tell her to dress simply. It affects her deeply. He is the only one who sees, not the outer shell, but the inner woman, the soul and not the body.

Nanda being cast as a dancer. While Nanda’s innocent sweetness conveys the character of Lakshmi perfectly (and while Nanda’s dancing is all right for less dance-centric roles, as in Usne Kaha Tha or Bhabhi), a dancing girl is supposed to be trained in dance. Nanda, unfortunately, cannot dance; even I, dance ignoramus that I am, can see that, and it pained me to watch her dance. 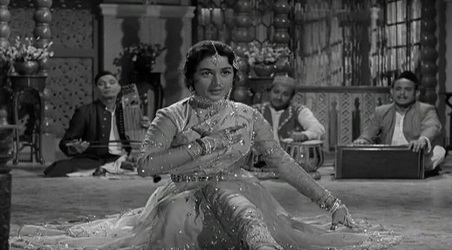 But, despite that, a good film. Just be ready with the fast forward button when Nanda’s mujras come on.