I don’t celebrate Holi—ever since I was a little girl, I’ve had a horror of being wet and dirty, and come Holi, I used to insist on locking myself in. I was in good company; though my father was obliged to go and play Holi with his colleagues, Mummy and my sister were as intent on staying clean as I was. Come Holi, we’d happily feast on gujiyas and whatever other goodies came our way, but pichkaris, gulaal, and the rest? No, thank you.

Not so with Hindi cinema, where Holi has been a big thing all along: the perfect situation for displays of affection, camaraderie, general love towards one and all. And I don’t think I have ever seen Holi depicted in a film without there being an accompanying song. That was what I’d first thought I’d do to mark Holi on this blog: a post of Holi songs. Then, looking back at the number of non-Holi songs that are about colours, I thought, Let’s give it a twist. Let’s talk about blue and pink and green and yellow. Let’s talk sky and trees and eyes and whatnot. Neeli aankhein, peeli sarson. Hariyali aur raasta.

Ten songs, therefore, that mention—in the very first line—a colour. And, to make it less of a sitter, no colour repeated, except when it refers to a very specific shade. As always, these songs are all from pre-70s films that I’ve seen, and are arranged in no specific order.

1. Neele gagan ke tale (Humraaz, 1967): Blue. I was torn when it came to a song about blue. Neele aasmaani boojho toh yeh naina was the first song that came to mind; but that, while a lovely song, didn’t quite tick every box for me, for the simple fact that Madhubala (like Sharmila Tagore in Kashmir ki Kali) didn’t have blue eyes—and, anyway, with Mr & Mrs 55 being in black and white, even if she had blue eyes, you wouldn’t have known it.

This song, therefore, which makes much of the blue sky. And what is more all-encompassing, all-pervasively blue, than the sky, which hangs above us all? Every other line of Neele gagan ke tale emphasizes this: everything happens under the blue sky. Love blossoms, the Earth gives of its bounty, the seasons pass. The picturization of the song, too, reinforces that: the sky, and its blueness, are very prominent here.

2. Gulaabi raat ki har baat gulaabi (Upkaar, 1967): Pink. The connotations of colours can be so different in different cultures. So stereotypical, too. Blue is for little boys, pink is for little girls. Pink is the colour of all things feminine: of cosmetics and lingerie, of less intimate clothing and of gemstones. Even of feminist movements that one would expect would have the guts to break free of this pink-loving stereotype that’s been forced on us women by a grossly commercial world.

And in Hindi cinema, pink is (was? Before Pink?) the colour of intoxication. Gulaabi aankhein are eyes that brim with the wine of love. A gulaabi raat is a night of intoxication, of lust and madness and of losing oneself so utterly in mindless, self-centred debauchery that nothing exists outside that space. Gulaabi raat ki har baat gulaabi, as Laxmi Chhaya’s dancer sings. Everything about this intoxicating night is intoxicating. Interestingly, there’s very little obvious pink to be seen in the picturization: one of the partygoers is wearing a pink dress, but Laxmi Chhaya and her fellow dancers wear something that may be pink but may equally be peach.

3. Bade hain dil ke kaale (Dil Deke Dekho, 1959): Black. Black is the colour of the night. It can mean gloom, it can mean the deepest sorrow: it is the colour of mourning. It can also be mysterious, enticing: a promise of adventure that may not be completely free of danger. And it can refer—both in English and in Hindustani—to someone wicked. A black-hearted villain, a kaale dilwaala.

In Bade hain dil ke kaale, though, Asha Parekh’s character isn’t being completely honest when she refers to Shammi Kapoor’s character as being black-hearted. There’s more than a hint of mutual attraction here, and she makes it amply clear that while she’s deriding this blue-eyed boy for having a black heart, she actually admires those blue eyes and those smiling lips. (It is all a farce, because both of them are trying to fool the other, but that’s a different story). A delightful song.

4. Sar par topi laal haath mein resham ka rumaal (Tumsa Nahin Dekha, 1957): Red. Shammi Kapoor again, and in—again—a Nasir Husain film (the one, in fact, which shot Shammi to fame). Red is one of those colours that features frequently in Hindi film songs. It’s the colour of everything from sunsets to blood, from a bride’s clothes to the colour of wine. A colour that prompts onscreen singers to sing of a bride going in her palanquin to her new husband’s home; to mourn over an addiction that will not be defeated; to weep over the blood spilled here, there, everywhere.

And red, when worn, is the colour of boldness, of a joie de vivre that will not be suppressed. Raj Kapoor’s vagabond in Shree 420 sang of the red Russian cap that he wore; his younger brother here wears a different style of red cap: not signifying Communism as that Russian one did, but one that shouts out loud his boisterousness, his love for his sweetheart. He is too busy singing her praises to talk of his own attire, but she (played by Ameeta) sings of it: that red cap and that silken handkerchief have stolen her heart.

5. Hari-hari vasundhara pe neela-neela yeh gagan (Boond Jo Ban Gayi Moti, 1967): Green. While green, in the context of the English language, may imply envy, it is also the colour that’s universally associated with nature. The Earth, the land. Trees, plants, fertility: all of these are symbolized by green. Which is why, when Jeetendra’s village school teacher in the hills in Boond Jo Ban Gayi Moti begins his song in praise of nature, the first word that comes to him is the colour of the Earth: green. He goes on to sing of the colourful panorama: “dishaayein dekho rangbhari”, of the multi-coloured flowers and the blue sky above, but it all comes down to the verdure of the Earth itself.

6. Dhaani chunari pehen (Hare Kaanch ki Churiyaan, 1967): Pale green. Literally, the colour of dhaan, or paddy. Yes, still green, but more specific. In some parts of India (such as Bhojpur and around), green is also associated with weddings. Traditionally, brides wore green bangles for the wedding, and a chunari of a very specific shade—that of pale green, the colour of paddy or dhaan. Naina Sahu’s character in Hare Kaanch ki Churiyaan, in a daydream about the lover who has gone away, imagines what he’ll bring back for her: bangles of green glass. With those on her wrists and a dhaani chunari veiling her head and shoulders, she will go to be his bride. I’ll admit this is probably the one song in this list that I’m not really fond of, but at least the colour involved is a relatively unusual one: a change from the reds and blues so common in lyrics otherwise.

7. Mera rang de basanti chola (Shaheed, 1965): Yellow. Like dhaani (or, actually, several other colours—gulaabi, naarangi and baingani—pink, orange and purple), basanti too draws its name from something in nature: in this case, not a flower or a fruit or a vegetable, but a season. Spring, or basant, embodied in the yellow of mustard fields in bloom. Another of Manoj Kumar’s films—Upkaar—celebrated this colour, this season, even very specifically the festival of Basant Panchami, in a song (Aayi jhoomke basant), but for me, the more iconic, the more poignant song, is this.

While ‘yellow’ in English is equated with cowardice, the significance of this colour in Hindi or Punjabi is very different: it’s supposedly the colour of sacrifice, which is why the would-be martyr sings: Colour me, from head to toe, yellow. Mera rang de basanti chola was written originally by Ram Prasad ‘Bismil’, possibly in collaboration with several other revolutionary poets, and was one of Bhagat Singh’s favourite songs. There are conflicting accounts of whether or not he actually sang it just before he was executed in 1931, but Hindi cinema seems to have embraced that concept, with this song being repeated in just about every biopic about Bhagat Singh.

8. Dupatta mera malmal ka rang saleti halka (Adalat, 1958): Grey. Another of those colours that derives its name from something in nature. Unusually enough, the source word here is not even originally Indian: it’s slate, the grey metamorphic rock that splits so easily into layers. Not a colour one would expect to come across in a screen world dominated by pinks and reds and greens and other bright colours, but there it is. Nargis’s exuberant young dancer, performing on stage, sings of her muslin dupatta, grey in colour. From a score that had so many good songs that overshadow this one, Dupatta mera malmal ka is still a pleasant one. 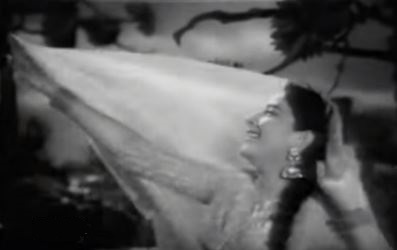 9. Hansta hua nooraani chehra kaali zulfein rang sunehra (Parasmani, 1963): Golden. Gold is in another league altogether when it comes to lyrics. Talk of somebody being good, and they’re sone ke dilwaale (with hearts of gold). The bloom of youth and beauty is invariably equated with gold—even when there’s no trace of the golden in the loved one. (I spent years, before I finally watched Kashmir in Kali, in wondering if the woman referred to as having golden hair and blue eyes was actually a foreigner).

Hansta hua nooraani chehra, while praising the perfection of a man (who’d have thought Mahipal was the one for whom this song was sung?), can at least be considered somewhat correct. His hair is black, and his complexion—flight of fancy, this, or just the result of love being blind—is golden. A classic song of praise, upbeat and catchy, in a film that was pretty hilarious when it came to fantasy.

10. Aankhon mein kya ji, rupehala baadal (Nau Do Gyaarah, 1957): Silvery. And where gold is, can silver be far behind? While the more common word, in Hindustani, for silvery is ‘chaandi’, that can lead to some ambiguities in interpretation, since silver itself is referred to as chaandi. So, Allah-Allah woh de gaya chaandi chhalla implies that the ring is of silver (the metal, not merely the colour), Chaandi ka badan is slightly less obvious (though if you consider ‘sone ki nazar’ as the corresponding second phrase, then it would probably imply the metals in both cases, not merely the colours of the metals).

So, instead of getting into ambiguity, I’m taking the easy way out and using a synonym for ‘silvery’: rupehala. What is in these eyes, asks the besotted lover. The silvery cloud, says his playful sweetheart. And yes, a cloud that’s silvery is far better than a cloud that only has a silver lining, isn’t it? 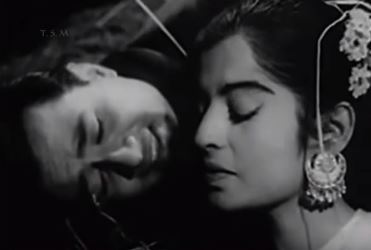 91 thoughts on “Ten of my favourite songs featuring colours”