No, this song list isn’t the result of a dear relative landing up in jail or anything of the sort. It just popped into my head one day when I was looking up a song on Youtube and saw Lapak-jhapak in the side panel. It occurred to me: Hindi cinema has its fair share of people who are in prison, at times in really dire straits (not the case with Lapak-jhapak, where David’s character is really quite comfortable), but still being able to summon up the energy to sing. As a character writes in Alice Walker’s The Color Purple, Why do tired people sing?… Too tired to do anything else. Maybe that’s the case with film characters in prison: lots of time on their hands and too depressed to do anything else. 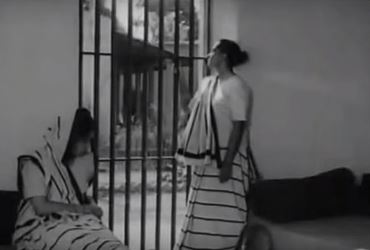 But, without further ado, on to the list. As always, these songs are from pre-70s films that I’ve seen, and in all cases, the singer is in prison. It doesn’t matter what sort of prison—the locations of these songs range from a police lock-up to a dungeon, to a ‘prison on the move’—but the basic premise should be that the person is kept captive, under some sort of governmental (or other entity in political power) discipline, which is why Helen keeping a blind Rajesh Khanna imprisoned in her house and singing Aao na gale lagaao na doesn’t qualify.

Here goes, then, in no specific order:

1. Lapak-jhapak tu aa re badarwa (Boot Polish, 1954): David’s ‘John Chacha’, a kind-hearted old bootlegger, is arrested and finds himself in the lockup after he falls neatly into a trap laid for him by someone discreetly enquiring about moonshine. In the lockup, he meets an old pal (played by Bulo Advani) and a bunch of shiny-pated fellow inmates. As they wait for the rain to come that night, John Chacha entertains his new friends with a song.

And what an odd song it is. Whose idea was it to combine a beautiful piece of classical music (and rendered brilliantly by the inimitable Manna Dey) with lyrics mostly about the beauty of the rains, but adding lyrics about the rain growing hair on bald heads? The forced ‘comic’ character of the song is intrusive enough to make it irritating, but thankfully—if you overlook those lyrics and focus only on the music, the singing, and most of the lyrics, it’s lovely. 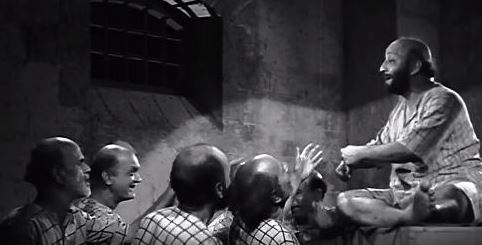 2. O panchhi pyaare saanjh sakaare (Bandini, 1963): A very different situation, and a very different set of prisoners. O panchhi pyaare is one of two songs in Bandini (the other is Ab ke baras bhej bhaiyya ko baabul) set in a women’s prison. This one wins hands down for me: I love its music, the spontaneous cheerfulness of the singer as she and the other prisoners go about their work, sifting wheat, milling flour, making clothing, washing it… and I love the lyrics. So poignant, so symbolic. Main toh panchhi, pinjre ki maina, pankh mere bekaar (I am a bird, a mynah caged; my wings are useless) is so true: Kalyani (Nutan), jailed for having murdered the wife of her ex-lover, is trapped in prison, unable to go in search of the man she still loves. And that is probably true of all these other women, too, whatever their crimes: they have all left someone dear outside, someone for whom they long. 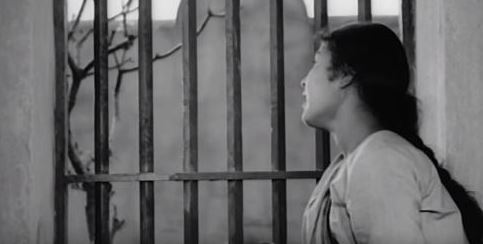 3. Mohabbat ki jhoothi kahaani pe roye (Mughal-e-Azam, 1960): The prisoners in the two previous songs have it easy compared to this one—but then, in Mughal times, having the gall to flaunt one’s romance with the heir apparent, and that in the face of the Emperor himself: that called for some pretty severe punishment. So Madhubala’s Anarkali finds herself in the dungeons, loaded down with chains (and with the décor of her cell consisting largely of more forbidding-looking chains). Even though she can barely get to her feet, she insists on tottering about the cell while she sings of how her love story has broken her heart, leaving her to weep for what was doomed from the very start. A depressing song, but beautiful nonetheless. 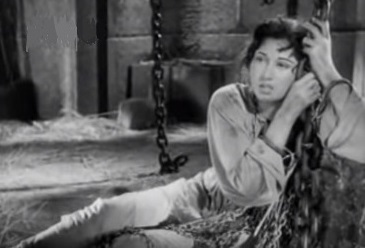 4. Mohabbat choome jinke haath (Aan, 1953): Madhubala’s co-star from Mughal-e-Azam, Dilip Kumar is the one in a dungeon here. But he’s in a far lighter mood, because his crime—while similar to Anarkali’s, that of presuming to romance royalty—is not that heinous, since the royalty in question (Nadira, in her debut role) is, deep in her heart, not utterly immune to his charm. So what if she doesn’t know it yet, and doesn’t acknowledge it. Hindi film hero that he is, he will woo her ardently, even if it means singing of his love from deep in the dungeons (what flimsy walls this prison has, that the princess and her women should be able to hear him inside the palace…).

Oh, and this prisoner has it easy: he has a friend as a fellow captive, and the princess’s maid is firmly rooting for him as well. 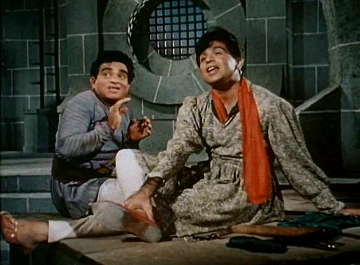 5. O aasmaan waale (Anarkali, 1953): Seven years before Mughal-e-Azam was released, there was this much less opulent version of the love story of Salim and Anarkali. It was known more for its superb music than for anything else, and here’s an example, a situation identical to the one in Mohabbat ki jhoothi kahaani pe roye. Bina Rai, as the doomed Anarkali, is imprisoned for daring to love Prince Salim, and while in prison, weeps for her love—and sings. Her cell is really rather more like a large hall than anything else (even the windows have pretty carved stone filigree instead of ugly bars!), and those chains hanging about her look more decorative than restrictive—she pretty much seems to be able to wander about wherever she wishes in the cell.

But, a beautiful song, and I like the fact that the music is subdued enough to let Lata’s voice shine through. 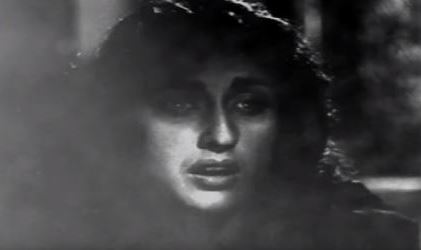 6. Mohabbat zinda rehti hai (Changez Khan, 1953): The theme of people who love well but not wisely provides plenty of scope in Hindi historicals for:

(a) The audacious would-be lover being imprisoned; and
(b) singing a song of love

As we’ve seen, (b) is often a case of mourning doomed love. In this case, however, with the Tatar warrior Sherwa (Premnath) and his girlfriend, Princess Azra (Bina Rai), it’s not a song of doomed love but a paean to everlasting love. Sherwa and Azra’s love has come up against a formidable foe indeed: none other than Changez Khan, who is ready to put thousands to the sword in his quest to have Azra for himself. Now, with Azra in a dead faint and Sherwa captured by Changez, Sherwa sings to Azra to take heart, because their love can never die out. Not an indoor prison, this (the Mongols, after all, were pretty much nomadic, so that makes sense); but Sherwa and his men are tied to trees and left to the mercy of the elements. Driving rain and chilly breezes can be even more killing than four walls, I guess. But an iconic song, and Rafi’s rendition seems so effortless. 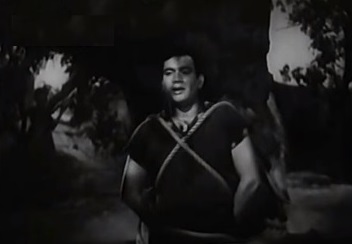 7. Zulf ke phande phans gayi jaan (Mujrim, 1958): And, for a break from all those emotional romantic songs sung by those taken captive, here’s one which goes in the opposite direction: it complains about what disaster befalls one who has fallen in love. Johnny Walker’s character finds himself in the police lock-up on suspicion of being a thief (the actual thief being Shammi Kapoor’s character). The lockup’s so full of bedbugs and mosquitoes that our man can’t sleep—so decides he may as well get up and sing about how romance has been the death of him.

Thankfully for him, his fellow inmates seem to take this abrupt awakening in their stride; they join happily in dancing about the spacious cell. Even the constables on duty outside come to have a peek and see what this unusual entertainment is all about. A delightful song, a great showcase of how wonderfully comic the Johnny Walker-Mohammad Rafi combination was. 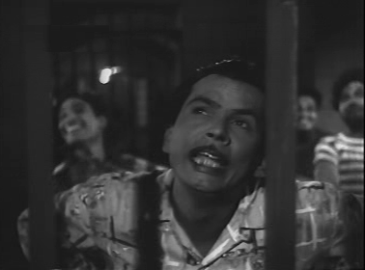 8. Apne liye jeeye toh kya jeeye (Baadal, 1966): This swashbuckler may not have been a huge hit, but it had some eye candy (notably, in the form of a very handsome young Sanjeev Kumar and a pretty Helen), and some nice songs. Of the songs, Apne liye jeeye toh kya jeeye was the best (and, it seems, was recognized as such by director Aspi as well as composer Usha Khanna, since it appears repeatedly in the film). In its entirety, the song is in two versions, and both have an interesting connection to prisons. The first time the song is sung (by Sanjeev Kumar’s character, the eponymous Baadal) is in a prison—but he’s not the prisoner. Instead, he’s wormed his way into the prison, and while he and his pals go about being the rescue party, unlocking cell doors left, right and centre, Baadal sings.

The second time the song appears (and that’s the one I’m referring to in this list), Baadal is the prisoner. Even though he’s out in the open, singing full-throatedly, the truth is that there are ropes tethering him to the soldiers who are taking him away, captive, to the frontier to be exiled. Still, our hero is not one to be cowed so easily, and he goes on singing lustily, while trying to get free. With some help. 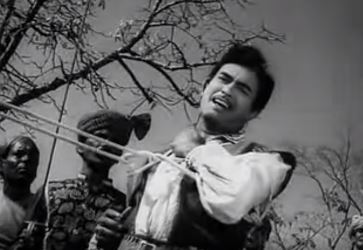 9. Mohabbat mein aise zamaane bhi aaye (Sagaai, 1951): At first sight, this song looks as if Premnath—incarcerated in a cell, lying on a bed of straw (and reduced to chewing it)—is the only prisoner here. The truth is somewhat different, though: our hero is a prisoner, but his girlfriend (played by Rihana) is just as much a captive as he is: a prisoner of a gilded cage, trapped by a wily and lustful king on a faraway island and being forced to get married to him. She can’t escape, so even though she’s in relative comfort (as can be seen), she is not free to leave, either. What amazes me is how two people who can’t even hear each other can sing so perfectly in tandem. Perhaps that’s what true love is all about. 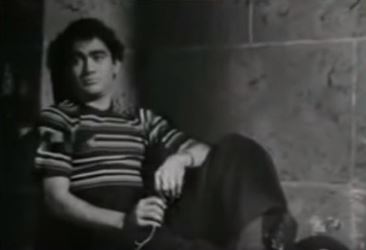 10. Mera rang de basanti chola (Shaheed, 1965): I began this list with a song (Lapak-jhapak tu aa re badarwa) which has absolutely nothing to do with romantic love (which, as you’ve probably seen, seems to be a common theme for captives to sing about). Neither does this song—and yet, the two songs could not be more different. Far from the light-hearted caper that is Lapak-jhapak, Mera rang de basanti chola is deathly serious, notwithstanding the determinedly smiling faces of Bhagat Singh (Manoj Kumar), Sukhdev (Prem Chopra) and Rajguru as they go to their execution. This is imprisonment of a different kind: it is final, fatal. It is for country, for freedom. And these men, knowing—from the start—that they would probably not live to see the end of the revolution they had begun—are proud to lay down their lives.

A very short song, and interspersed with dialogue, yet a classic song of desh bhakti. 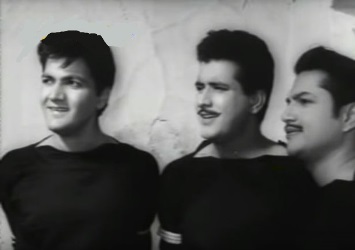 129 thoughts on “Ten of my favourite ‘imprisoned singer’ songs”