Last week, I published a guest post written by my father about his brother, the guitarist David Vernon ‘Verni’ Liddle. My father had spent a lot of time going through all of his brother’s recordings to try and track down each song he’d played, and then, since we needed to embellish the post with some visuals, we tried looking for photographs as well. Other than a handful of photos—nearly all of which I’d used before in other posts about my uncle—there was nothing.

Then, just as I was about to publish The Guitar That Sang, my father phoned to tell me that he had acquired some photos. My cousin, Verni’s son, had found some. I decided we’d have a look at the photos and put them in a separate post.

So here they are. They are really just a handful, and none of these feature any known names, as far as I can tell, but some of them are interesting and may have potential.

To start with, Verni with his wife Sheila. Sheila used to sometimes accompany him and his band on the guitar.

Verni with his wife, Sheila.

And here are the band (they called themselves Delhi Orchestra) performing. They were called upon to perform at concerts, parties, weddings and more.

Here is the band again, this time with a crooner singing along. The man on the accordion is Khurana. 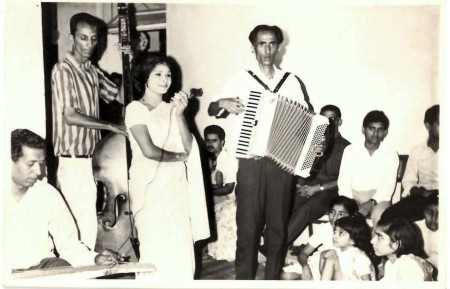 A performance by Delhi Orchestra. Playing the accordion is Khurana.

Another photograph of a performance. Verni is half-hidden behind the singer. The man with the Spanish guitar is Alfred Shah.

And here is where things start getting interesting. I have no idea who these gentlemen are, especially the Sikh sitting next to Verni. Is there a possibility that that’s Hazara Singh? Yes, a long shot, but if someone can tell whether that’s him or not, I’d be grateful. The only photos of the famous electric guitarist I’ve come across are from his early days, and I can’t tell if it’s him or not.

Verni with others – but who?

Another group sitting on a sofa, with Verni one of them. Instead of a candid shot, this one’s a posed shot. I did mention to my father that the man sitting on Verni’s right looks a little like C Ramachandra, but both of us agreed that his resemblance (which is fleeting) is to a very young C Ramachandra—not at all the way C Ramachandra looked by the 60s, which is probably when this photo was taken.

A group photo with Verni.

The last photo, and the one which intrigued me the most. This is the same bunch of men from the previous photo, but here they’re outside—and undoubtedly in Bombay. The man in the middle is obviously some sort of celebrity (at least relatively speaking), given all those garlands he’s festooned with and the bouquet he carries. But who? 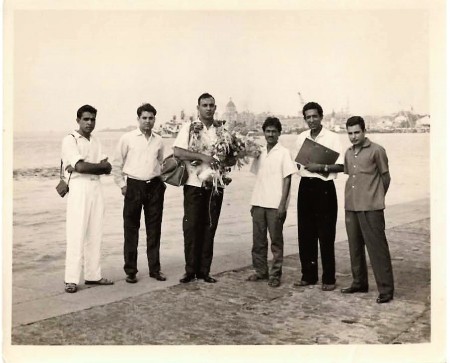 By the sea in Bombay.

If anybody out there has any input to offer about this, please help. We’d love it if you could identify somebody here.