Last week, I published a guest post written by my father about his brother, the guitarist David Vernon ‘Verni’ Liddle. My father had spent a lot of time going through all of his brother’s recordings to try and track down each song he’d played, and then, since we needed to embellish the post with some visuals, we tried looking for photographs as well. Other than a handful of photos—nearly all of which I’d used before in other posts about my uncle—there was nothing.

Then, just as I was about to publish The Guitar That Sang, my father phoned to tell me that he had acquired some photos. My cousin, Verni’s son, had found some. I decided we’d have a look at the photos and put them in a separate post.

So here they are. They are really just a handful, and none of these feature any known names, as far as I can tell, but some of them are interesting and may have potential.

To start with, Verni with his wife Sheila. Sheila used to sometimes accompany him and his band on the guitar. 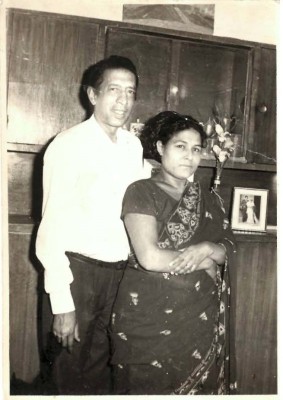 Verni with his wife, Sheila.

END_OF_DOCUMENT_TOKEN_TO_BE_REPLACED

Today is the 80th birthday of my father, Andrew Verity Liddle. Papa has influenced me in many ways, but possibly the greatest influence on my life that I owe to him is my love for old Hindi cinema and its music. Ever since I was a toddler, I’ve been surrounded by the voices of the 50s and 60s—if it wasn’t our old record player and the LPs whirling on it, it was the radio, with Ameen Sayani’s voice announcing one song after another… and most of it courtesy my father, who loves the music of that period.

As I’ve mentioned on several other posts on this blog, my father had an elder brother who worked in the cinema industry. David Vernon ‘Verni’ Liddle (also known professionally as ‘David Kumar’, or ‘Kumar Sahib’), nine years older than my father, was a guitarist who played for some of the greatest hits of Hindi cinema (and yes, I have mentioned some of these before, but recent research done by my father has thrown up pleasant surprises far beyond what I’d expected).

END_OF_DOCUMENT_TOKEN_TO_BE_REPLACED

Those of you who’ve been frequenting this blog for a year or more probably came across this earlier post, on my uncle David Vernon Liddle. Vernie Tau (tau is the Hindi word for a father’s older brother) was my father’s elder brother. He was born on October 12, 1929, and passed away when I was barely 9 years old. I do not remember much of Vernie Tau except for the fact that he was a witty, fun-loving man with (as a cousin of mine puts it) “a terrific sense of humour”. And he was a guitarist who played in some of Hindi cinema’s greatest hits from the early 50s.

END_OF_DOCUMENT_TOKEN_TO_BE_REPLACED

After having waxed so long and eloquent about my parents, my sister, my cousin, and a couple of other relatives (not to mention servants!) in the context of our love for cinema – it’s time to focus on the one link my family does have to cinema. The one person from our family who made it to the Hindi cinema industry in Bombay, back in the golden years.

David Vernon Liddle, who called himself David Vernon Kumar. People in the industry used to call him ‘Kumar Sahib’, and he was my father’s elder brother.