I have a confession to make: I hadn’t heard of this film, or its (supposedly much better-known) 1959 remake until blog reader Kenneth J Narde mentioned it in a comment regarding my introductory post for Food and Food Movie month on Dustedoff. Kenneth wrote of pancakes—and I was immediately sold. I am a pancake fan, you see. I love pancakes in all their many avatars, from crepes to those buttery, maple-syrup laden stacks… 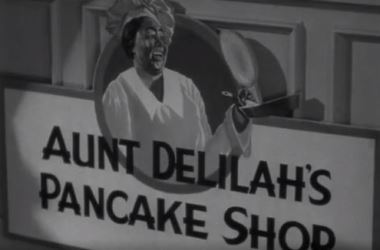 … which are what hold centre stage in Imitation of Life. Because Bea Pullman (Claudette Colbert), a widow with an infant daughter, Jessie (Juanita Quigley, utterly adorable), to bring up all by herself, makes ends meet by selling bottles of maple syrup. It was what Bea’s husband used to do, and now Bea is doing it too, trying desperately to hold body and soul together. It’s an uphill task: little Jessie hates to be left at the day nursery, Bea has to race to do housework and look after Jessie and get ready for work. 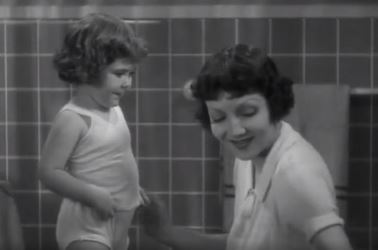 In the midst of all of this, a stranger rings the doorbell. Delilah Johnson (Louise Beavers) is looking for an address, and has turned up at Bea’s doorstep by mistake. Just as the misunderstanding has been sorted out and Delilah is leaving, there’s a huge splash and a scream from upstairs—Jessie, reaching into the bathtub to get her rubber duck, has fallen in. No harm done—she’s not hurt or anything—but she’s very wet. Now Bea has a lot more work to do. 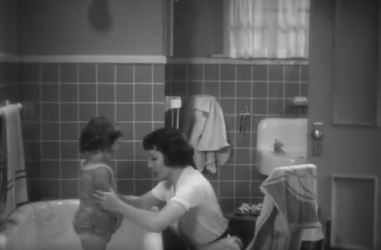 When she comes downstairs, it’s to find that Delilah has taken things in hand and got some spills cleaned up in the kitchen. When Delilah suggests Bea take her on as help, Bea is reluctant: though she would welcome the help—and Delilah seems very competent—she cannot afford it. No, no, says Delilah. All she wants is boarding and lodging for herself and her daughter, Peola. Little Peola, who (unknown to Bea) has been waiting outside all this while, is ushered in. She’s surprisingly fair, and Delilah explains that Peola takes after her father—he was the same. 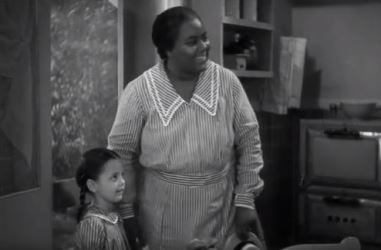 Bea, both beguiled by Delilah (and perhaps partly gently bull-dozed by her too), as well as realizing the sheer practicality of what Delilah suggests, gives in. So Delilah and Peola move in, and Delilah takes over. The two girls go to school, Delilah looks after home, Bea goes out peddling her maple syrup.

One morning, eating Delilah’s fabulous pancakes for breakfast, Bea wonders what the secret to the pancakes is, and is told that there is a secret. Passed down from Delilah’s grandmother to Delilah’s mother, and to her, Delilah. She whispers it to Bea. 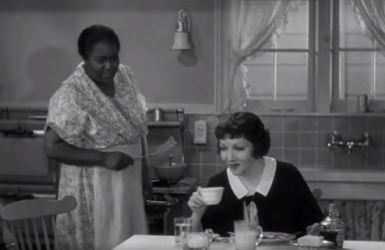 And Bea, passing an empty boardwalk space later in the day, has a brainwave. They will set up a store, Delilah and she. They will sell pancakes with maple syrup.

Even before she can go home and propose the idea to Delilah (which says a lot about the way African-Americans were treated even by the most ‘liberated’ of whites back in the 1930s), Bea jumps in. She collars the owner and fixes up a lease (which takes into account that she has very little ready money to pay for anything right now) for the space. 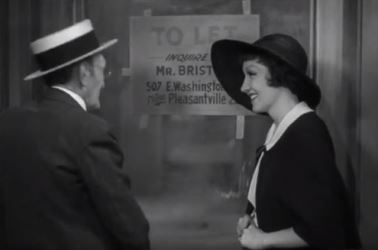 A bewildered but enthusiastic Delilah is brought to the place later, and while Delilah gets down to cleaning up their future store, Bea goes hammer and tongs at the painter and the furniture man, quickly and efficiently getting them to agree to her terms—all of which mean that she will pay them the bare minimum, and that too over several months or years or whatever it takes. 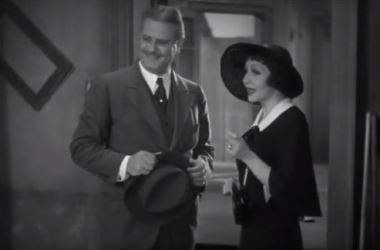 While their respective mothers are hard at work, Peola and Jessie are growing up.  One day, they come home with Peola in tears, indignant and distressed because Jessie called her black. Jessie gets ticked off for being rude, and Delilah tries to explain to Peola that there’s nothing wrong in that; after all, beneath her skin, Peola is black. She may not look it, but that’s the truth. Peola isn’t convinced; already this child is realizing that, fair-skinned as she is, she is caught between two worlds.

The difference between black and white is brought forth even more forcefully one rainy day when Delilah, fearing that Peola will get wet coming home in the rain, goes to her daughter’s school carrying raincoat and boots. The teacher—who’s never met Peola’s mother—is puzzled when Delilah explains the errand she’s come on. But there are no coloured children in her class, the teacher says. Peola, having spotted her mother, has already hidden her face behind her book, but Delilah sees her and identifies her. Peola escapes and runs off into the rain, chased by the horrified comments and jeers of her classmates. 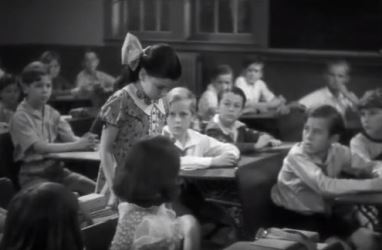 Even as the business prospers and grows, with ‘Aunt Delilah’s Pancakes’ proving a big hit, Peola becomes more and more miserable.

On the same rainy day that Peola finds herself torn between her real self and the one she’s carefully nurtured for the benefit of her schoolmates, another important incident occurs. A passerby (whom, subsequently, we are introduced to as being Elmer Smith, played by Ned Sparks) chances on the pancake store. He doesn’t have money to buy any pancakes, but Bea, who’s managing the store on her own while Delilah is away at Peola’s school, takes pity on him. She makes him some pancakes, and he loves them so much that he gives her some advice: box them. Package the flour and sell it; it’ll bring in far more money than this store. 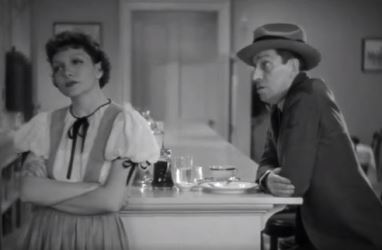 Bea is canny and ambitious and good at recognizing a useful idea. So, the next thing we see, packets of ‘Aunt Delilah’s Pancake Flour’ are being boxed, and soon it’s big business. Bea, with Elmer Smith now as an employee of hers, becomes so wealthy that she’s able to afford a large mansion and many other luxuries; Jessie goes off to a fancy school; and Delilah, who owns 20% of the shares in Bea’s company, refuses to buy her own house and car, because she doesn’t want to leave Bea. 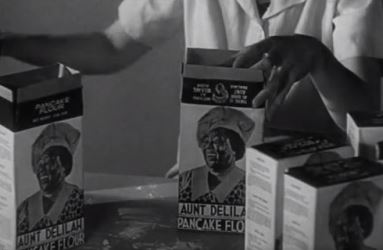 At a grand party she hosts, Bea meets—and immediately falls for—Elmer Smith’s friend, Stephen Archer (Warren William), an ichthyologist. The feeling is mutual: Stephen too falls in love with her pretty much at first sight, and it’s not long before he proposes to her.

But while Bea and Stephen bask in their love and their plans for a happy future, somebody in Bea’s house is desperately unhappy. Peola (now Fredi Washington) is torn, more torn than she was as a child. She looks in the mirror and sees a white woman. But she isn’t white; she is black, as her bewildered mother keeps reminding Peola. 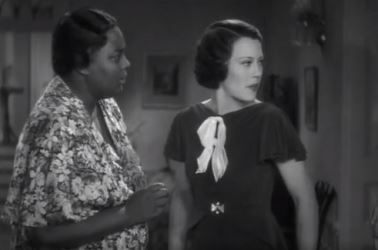 Bea, seeing her old friend’s misery and helplessness, suggests Peola be sent off to one of those Southern colleges, where she’ll be surrounded by blacks. Perhaps that will help? Delilah, convinced of the soundness of this plan, agrees, and Peola, distressed and no less confused than before, goes away.

Jessie, who’s at school and will soon be going to college, comes home for a visit. In anticipation of her return, Bea cautions Stephen: let’s not tell Jessie about us yet. Jessie and Bea have always been the only ones together in their little family; to suddenly find that her mother is getting married and that she’s going to have a stepfather might be too much for Jessie. They should let Jessie get to know Stephen, get to like him, before breaking the news. 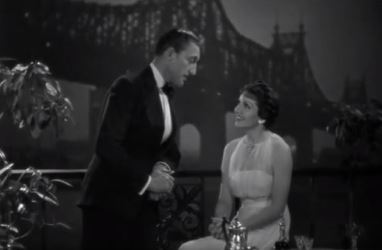 But the best-laid plans of mice and men, as they say… Bea’s and Delilah’s intentions for their respective daughters are nothing but the best. For these two women, their daughters are their world. However, circumstances, and the fact that Jessie and Peola are human beings, adults with their own emotions and feelings, conspire to upturn everything Bea and Delilah have hoped for.

The story, which was an unusual one.  Two women holding centre stage, and their relationships with their daughters forming the pivotal part of the plot: now that’s not something I’ve come across too often. The scripting was good, too, with the relationships—building up or deteriorating—coming across as believable (the only exception for me was the romance between Bea and Stephen: that happened too quickly to be credible).

Claudette Colbert as Bea and Fredi Washington as Peola. These two, in particular, stand out as interesting characters, and well portrayed.

First off, let me admit that I’d thought there would be a good bit of racism in this film, considering the way it started off. And there was—in the way Delilah always sits up front with the chauffeur in the car while Bea sits at the back; the way the school teacher regards Delilah with astonishment when she comes looking for her daughter in the class; and other instances. That said, I loved the warmth that develops between Bea and Delilah, and to some extent, between Jessie and Peola—but one can never overlook the fact that the ‘black-is-black, white-is-white and never the twain can meet’ thought is there. Decidedly so (and it’s brought home even more forcefully towards the end of the film, when one is reminded that one’s place is in one’s place: blacks should remember they’re black).

But that’s also so confusing—and thought-provoking—because I also agree that one shouldn’t be ashamed of what one truly is. For me, there is something wrong in trying to hide one’s true ethnicity. Then, on the other hand, if one’s true origins leave one open to being humiliated and insulted just because of that matter of race, does the pretence become somehow valid? Imitation of Life does throw up several questions around the matter of race, none of which I could answer for sure, even for myself.

The other irritant for me was relatively minor. I do, do wish Fredi Washington’s role had been bigger, the dilemma Peola faces examined more deeply, shown more from her point of view. Too little of what the adult Peola faces, how she fares at college, what happens there, is shown (in fact, nothing is shown of Peola’s time at college). I was left with a feeling of incompleteness when it came to Peola—I could feel for her, because she was confused and frustrated, but before that feeling could build up into a complete sympathy for the girl, the film had turned it around to make Peola the bad one, the one to be blamed.

But, on the whole, a good film, and a thought-provoking one. Next, I’ll be watching the 1959 Imitation of Life, and doing a comparison of these two films to see which one is better. Watch this space!

Unlike the fair-skinned black woman ashamed to be thought of as black in Imitation of Life, Fred Washington, in real life, was very proud of her African heritage. She was the co-founder and head of the Negro Actors Guild, which worked to promote fair employment for African-Americans in the entertainment industry. Interestingly enough, her fair skin and green eyes drew attention from several would-be supporters who wanted to pass her off as white in films; Washington turned them down and refused to be recognized as anything but African-American.