The title of this post will probably require some explanation before I launch into the list itself.

Several years back, I did a post on female duets. Commenting on that, fellow blogger and blog reader Carla wondered about the rationale or thought behind songs like Reshmi salwar kurta jaali ka, where a dance performance featuring two women dancers has one woman dressed as a man, supposedly romancing the other (who’s dressed as a woman). I had no explanation to offer, and over the years, while I’ve mulled over this plenty of times, I’ve still not figured out why this became popular.

You know the type of song: there’s a fairly conventional love song, often teasing and playful, being sung—and the two people onscreen, while both women, are dressed as man and woman. The woman dressed as a man isn’t (unlike Geeta Bali in Rangeen Raatein), however, actually pretending to be a man: it’s very obvious that she is a woman, and that she’s supposed to be a woman (even the playback singer is a woman). 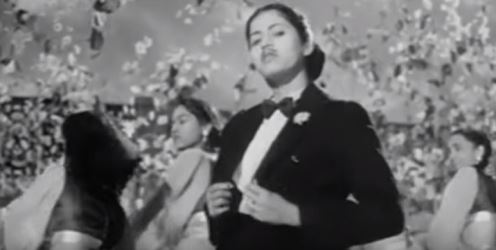 But why? The obvious intent, to someone not familiar with old Hindi cinema, could be that they are supposed to be lesbians—but I’m 100% sure that was not the case. Then what? Because it’s easier to find good female dancers? (This used to be the case back when I was in school, and almost all the dances for Annual Day were girls-only, the boys invariably possessing two left feet). That can’t be the case, either, since there are plenty of excellent male dancers in old Hindi cinema.

Another possible reason, again stemming from back when I was a schoolgirl: girls are shy of dancing with boys, especially in romantic songs. Not true for cinema, though, since everybody knows that this is acting, no more, and so there are innumerable songs where men and women do dance together, sometimes really close too.

So, I’ve come to the conclusion that I don’t know. If anybody has any other explanations to offer, I would be happy to read them! Meanwhile, here’s my list of favourite songs which fit the bill. As always, these are from pre-1970s Hindi films that I’ve seen. These songs are in no particular order.

1. Reshmi salwar kurta jaali ka (Naya Daur, 1957): At a village, a pair of dancers who’ve arrived to entertain the villagers perform a ‘romantic’ duet. Kumkum is the ‘woman’ in this case, and Minoo Mumtaz acts the ‘man’, smartly dressed in a Punjabi-style lungi, kurta, and brocade-edged little waistcoat. The tone of the song is pretty typical: ‘he’ heaps praise on her, ‘she’, while chastising this roadside Romeo, is all smiles, singing and dancing along happily. And the audience, of course, is all agog.

2. Chaakuwaala chhuriwaala (Al Hilal, 1958): From a very popular song to one that’s relatively little-known (but which I personally like a lot, because it’s got such an infectious beat to it). Here, Shakila plays the ‘woman’ and is accompanied by another actress (who is this? Does anybody know?) who acts the ‘man’. The amusing bit here is that in this film, Shakila’s character spends almost all of the story acting as a girl who pretends to be a man—so in Chaakuwaala chhuriwaala, her character has been roped in to pretend to be a girl, because ‘he’ looks so girlish! And a woman is called on to pretend to be the ‘woman pretending to be a man’. All very confusing, but the song is so much fun.

3. Gore-gore o baanke chhore (Samadhi, 1950): Samadhi was not the sort of film one would expect to have a song-and-dance like this one: it was, for most of the story, a fairly tragic, often melodramatic, tale of doomed love during the heyday of the Indian National Army. But Nalini Jaywant and Kuldeep Kaur, playing sisters, are performers here. And they’re performing for the soldiers of the INA, with a young and handsome Ashok Kumar among the audience, watching eagerly (and falling in love). It’s interesting to note that this isn’t just a case of cross-dressing, it’s a case of a love that crosses barriers of race too, considering the ‘woman’ here is East Asian (Chinese? Japanese?) and the ‘man’, with Kuldeep Kaur dressed in coat tails and trousers and sporting a very floppy-brimmed hat (not very masculine, that), obviously supposed to be a Westerner.

4. Dupatta mera mal-mal ka (Adalat, 1958): The single biggest reason to watch Adalat is for its songs, from the romantic Zameen se humein aasmaan par to the poignant Yoon hasraton ke daag and the tragic Unko yeh shikaayat hai. Dupatta mera malmal ka does get overshadowed a bit in the process, but it’s a good song in its own way—a strongly Punjabi way. There’s somewhat of an echo of Reshmi salwar kurta jaali ka here: in the fact that it’s Minoo Mumtaz who’s the ‘man’, that she (or he?) is dressed in typically rural Punjabi attire, and that the attractiveness of clothing—dupatta, kurta—plays an important part in the lyrics. Here, the woman gets to praise the man too, though.

5. As-salaam alekum babu (Kalpana, 1960): The Punjabi motif is carried through in this song as well, even though that As-salaam aleikum might give you the initial impression that this is from a Muslim social. But no, this is rural Punjab all the way, with the last stanza even being in Punjabi. This is also an example of a song that is actually impossible, since it’s picturized on Ragini and Ragini—one Ragini acting the ‘woman’, the other acting the ‘man’, and all the while Ragini not in a double role. It’s not even a dream sequence (where pretty much anything can happen), but a stage show, which just goes to show how many liberties Hindi cinema thinks itself entitled to take. But Ragini is a great dancer, and the song is good. 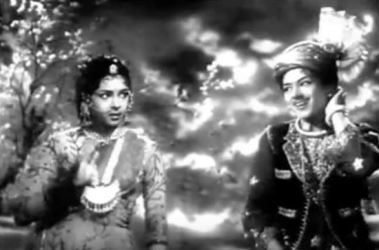 6. Jawaani jala bedardi (24 Ghante, 1958): In the same year that she danced to Chaakuwaala chhuriwaala, Shakila also acted as a rather more conventional heroine in 24 Ghante. In this song sequence, her character gets married—to a police officer (played by Premnath)—and the two performers who dance at the wedding reception use the “If you pester me I will have you arrested” trope to its hilt in their song. The ‘woman’ here (who looks rather like Praveen Chaudhury, though I’m not sure) tells the ‘man’ (Sheila Vaz) to get lost, or she will drag him off to the thana. And he retorts, in a sly indication of the romance that’s just culminated in marriage in front of them, that he will take her along to prison. Again, a distinctly Punjabi flavour to the song, which makes me wonder if this cross-dressing (but not quite) is a common theme in Punjabi folk dances? 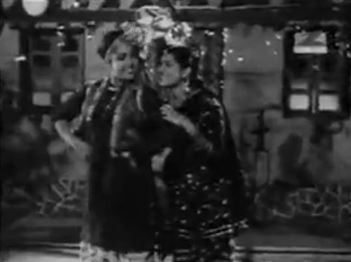 7. Na na na re na na haath na lagaana (Taj Mahal, 1963): Like Adalat, Taj Mahal too had a lot of really good songs (and really popular ones, too), which is perhaps why this ‘cross-dressed woman’ song gets sometimes overlooked. Even though it’s an excellent song, and with really good choreography too. The theme is the time-honoured one: he is pestering her with his flirting/stalking/whatever, and she wants him to desist. Helen is the ‘woman’ and Madhumati the ‘man’, and their dancing is so lively and graceful, it’s a pleasure to watch. 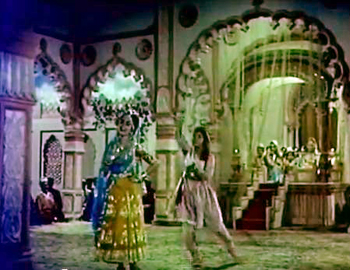 8. Sapera been bajaa been bajaa (Bhai Bhai, 1970): Asha Parekh is the ‘woman’ here, and there’s another woman (whom I cannot identify) dressed as a man—as the sapera or snake charmer to whom the song is addressed. Sapera been bajaa been bajaa nachoongi, however, differs from almost all the songs on this list in two aspects. Firstly, only one person—the ‘woman’—does the singing, and her song is all self-praise: there’s nothing here about unwanted attention or telling someone to get lost. No: she wants all the attention she can get. Secondly, unlike the all-women dancing troupes of the previous songs (Gore-gore o baanke chhore, Dupatta mera malmal ka and Chaakuwaala chhuriwaala all have dancing extras), this one has a fair number of male dancers as well. Which, of course, begs the question why a man couldn’t have acted the sapera, too: but perhaps good women don’t dance with men? 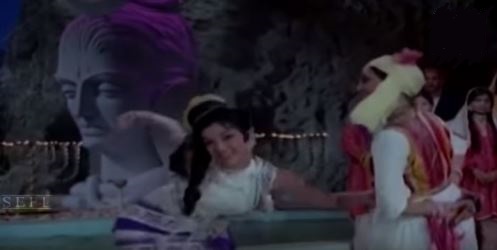 9. Jaane kahaan dekha hai (Biwi aur Makaan, 1966): This is another unusual song, in that the singing is actually being done onstage by a man—Biswajeet’s character. In a sensible departure from the norm (really, how many people have the lung power to be able to sing while dancing vigorously?), Kalpana’s character only does the dancing, leaving the singing to her beloved—while she acts as the beloved of Krishna, played by a woman. A short, sweet song about the love between Krishna and Radha, and the raas leela on the banks of the Yamuna.

10. Chhodo chhodo ji baiyaan mori (Baradari, 1955): And, to end, yet another song (this is the third in this list) in which Minoo Mumtaz is the ‘man’—in this case, to Cuckoo’s ‘woman’. Of all the songs in this list, Chhodo chhodo ji baiyaan mori is the one with the most informal setting. These women are performers, of course, but their stage is the street: they dance amidst a crowd, most of them initially consisting of lecherous-looking men, but later expanding to women and children as well. The theme is the usual: she is resisting ‘his’ advances, though in a flirty way that suggests her resistance is not really resistance after all.

Which other songs of this type would you add to this list?