Life has been very hectic the past few months. I’ve been working on several writing assignments, switching from one novel to another; the LO, now poised to leave kindergarten and progress to Class I, requires a good deal of attention, and various lit fests or other book events have entailed (and are going to entail) some travelling.

So, when British actor Albert Finney passed on February 7th this year, while I did notice the news article about his death in the newspaper, I passed it by without it really registering who Albert Finney was (Poirot, in the 1974 version of Agatha Christie’s Murder on the Orient Express, just in case, like me, you were clueless too). It was blog reader Hurdy Gurdy Man who, a few days later, reminded me of Finney’s death and asked me if I was meaning to review a film of his by way of tribute. I thought I would: Two for the Road, I told Hurdy Gurdy Man in an e-mail.

But, the sad irony of fate: just a couple of days back, I got another e-mail from Hurdy Gurdy Man, informing me that the director of Two for the Road, Stanley Donen, had passed away as well. Stanley Donen (who died on February 21) had directed some of Hollywood’s most popular musicals, such as Singin’ in the Rain, An American in Paris, and Seven Brides for Seven Brothers, before he directed Indiscreet and then moved to the UK, where he directed (among other films) The Grass is Greener, Charade, and Two for the Road, an important landmark in the history of British cinema—a classic film of the British New Wave.

END_OF_DOCUMENT_TOKEN_TO_BE_REPLACED

I hadn’t been able to decide on which film to review after Benazir, so I asked a bunch of friends to help me out – just by suggesting a genre. I got a varied lot of answers. Romance. Comedy. Social drama, à la Ladri di Biciclette. Suspense. Something with Cary Grant.
The result? This film, which is suspense, has a good bit of romance and comedy – and stars Cary Grant. (Sorry, Harvey: I’ll review something along the lines of Ladri di Biciclette sometime soon). 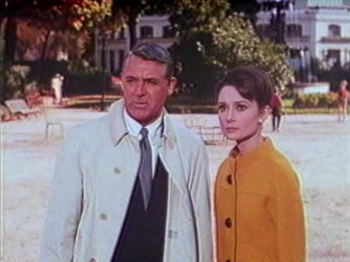 END_OF_DOCUMENT_TOKEN_TO_BE_REPLACED

Ever noticed how many old films were set in Paris? The Last Time I saw Paris, Gigi, An American in Paris and countless others celebrated the French capital’s reputation as one of the world’s most romantic cities. Interestingly, too, a lot of films that weren’t primarily romances were also set in Paris. Ninotchka, A Shot in the Dark, Charade – and this one, like Charade, an Audrey Hepburn starrer that’s a fantastic cocktail of comedy, romance, and most importantly, very clever crime.

END_OF_DOCUMENT_TOKEN_TO_BE_REPLACED

On a flight from Montreal to New York, Lisa (Samantha Jones) smuggles a doll that plays a catchy little tune and holds in its stuffed cloth body a very valuable cache of heroin… 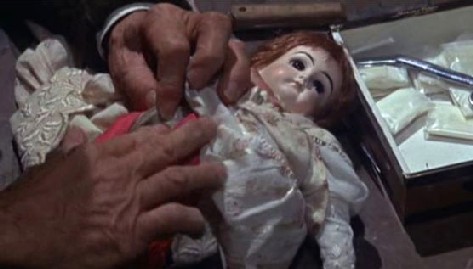