On a flight from Montreal to New York, Lisa (Samantha Jones) smuggles a doll that plays a catchy little tune and holds in its stuffed cloth body a very valuable cache of heroin…

…and this doll, which the unscrupulous Lisa has decided to use for her own benefit by hoodwinking her accomplice, becomes the key element in a taut, often scary thriller. A thriller in which Audrey Hepburn plays a blind woman who finds herself trapped in her home—alone with a killer. Wait Until Dark is a brilliant film, all twists and turns and catch-you-by-the-throat suspense. Not a whodunit or even a whydunit, but a humdinger of a film that takes a simple tale—a crook trying to retrieve stolen goods—and makes it into something hauntingly unforgettable. I should know; I saw it as a teenager and haven’t forgotten it since.

Anyway, back to where we were: Lisa and that all-important doll. On disembarking, Lisa notices that someone (a very menacing someone) has come to receive her. So, while she’s heading out, Lisa manages to palm off the doll onto an unsuspecting fellow traveller (Efrem Zimbalist, Jr). He goes out of the airport with the doll, while Lisa is met by the man who’s come to receive her.

The scene now switches suddenly to a quiet street in New York, where two ex-con men, Carlino (Jack Weston) and Mike Talman (Richard Crenna) have been summoned to a flat by their old accomplice, Lisa. Carlino, Talman and Lisa used to play a game of unfaithful wife-outraged husband-detective to fool wealthy men who liked to play around—until Carlino and Talman got caught and sent to prison. Now they’re out, and Lisa’s asked to meet them. When they get to the address she’s given, they find a typewritten note on the door:

So, of course, being old friends of Lisa’s, they go in and make themselves at home. Carlino fixes himself a sandwich, and Talman pokes about a bit. While he’s looking about the house, he comes across a wedding photo of two strangers, on the dressing table—and it dawns on him that this isn’t Lisa’s home. Talman and Carlino don’t want to risk being caught breaking into someone’s house; but before they can leave, a visitor (Alan Arkin) arrives. 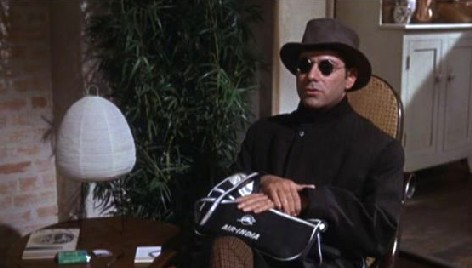 This man, clad in black leather and wearing a sinister pair of round-lensed sunglasses, seats himself carefully in a chair, smokes a cigarette (which he stubs out in a small jar he retrieves from the bag he’s carrying) and proceeds to recount to Carlino and Talman the stories of their own sordid pasts. He says his name’s Harry Roat, and he tells them why they’ve been summoned to this particular apartment: Lisa had handed over a doll to Sam Hendrix, the photographer who lives in this house and who had been on the Montreal-New York flight.

Lisa, explains Roat, had phoned Sam asking for the doll, but Sam said he hadn’t been able to find it in his luggage. Sam has obviously realised the doll’s worth more than it looks; he’s hiding it somewhere. Roat says Lisa is willing to pay Carlino and Talman $2,000 each to find it.
But Talman, who’s much sharper than Carlino, smells a rat and guesses there’s more to this than Roat’s telling them. Especially since there’s a locked wardrobe in the house—why would the Hendrixes lock a wardrobe and leave the front door unlocked? Roat’s hiding something.
Suddenly, it’s Carlino and Talman against Roat: he pulls a knife, they pick up whatever they can find: and Roat, backed into a corner, surrenders the wardrobe key to Talman.
And guess what Talman finds there? Lisa.

Talman and Carlino may be thugs, but they’re not murderers, and they decide they’re better off leaving Roat to clean up this mess on his own.
Unfortunately for Carlino and Talman, Roat has something even nastier up his sleeve. Remember how much at home Talman and Carlino had made themselves when they first entered? So much at home that they’ve left the flat awash with their fingerprints. And they’re ex-convicts too, on file. Whom will the police look for when Lisa’s corpse is found at the Hendrixes?

And in the midst of all this, someone else arrives. It’s Sam’s wife, Susy (Audrey Hepburn). Blinded a year ago in an accident, Susy’s going to blind school, still trying to adjust to a life in which the only colour is brown.
Susy gets the feeling that someone is around—she can smell cigarette smoke, and trips over a chair that isn’t where it should have been—but she comforts herself with the reassurance that Gloria (Julie Herrod), the young girl who lives upstairs, has been around, sneaking Sam’s cigarettes.

But Susy will discover, in less than 24 hours, that Gloria wasn’t to blame. Because, within a few hours, the body of a young woman will have been discovered near the block of flats. And Sam, summoned to a photo shoot in faraway Asbury Park, will have to go off for the entire day, leaving Susy alone at home.

Because Talman and Carlino, perhaps a little more scrupulous than the evil Harry Roat but caught in his trap anyway, will try to find that doll in the Hendrixes’ apartment. Talman will act the friend—an old buddy of Sam’s from way back when they were in the Marines together.

He will be there when Roat, disguised as an old man, crashes into the house, tearing things apart and more or less accusing Sam of having had an affair with the woman—a Mrs Harry Roat—who’d been found murdered nearby. And Talman will be there to phone the police. He’ll even be there to stand up to the domineering ‘cop’ (Carlino) who comes to ‘investigate’. It will be Talman, dependable and friendly Mike Talman, whom Susy will turn to, to help find that doll everybody seems to be looking for so desperately.

How long will the game last? Will Susy, all by herself, and blind—be able to see through the elaborate story Talman and Carlino and Roat have cooked up for her? Will she realise, after all, that the suspicion of Sam’s involvement in the so-called Mrs Roat’s death is a mere tissue of lies? Will she be able to hold out until dark, when the darkness may just give her a fighting chance?

The story. It’s a very well-scripted film, the suspense superb and every little detail adding up to the story. Everything fits in—from the fact that Gloria’s father left her and her now-never-there mother to fend for themselves; to Susy’s sudden realisation that it’s winter now and darkness falls early, so nobody should need to fiddle with the blinds so late in the day… to the fact that Susy and Sam have known each other only a year, not enough time to get to know too much.

Susy. Audrey Hepburn’s acting is excellent (it won her an Oscar nomination), but more than that, it’s also the characterisation of Susy that impressed me. This young woman’s battling sudden trauma (she’s still coming to terms with being blinded); now, she’s faced with the suspicion that her husband may have not just cheated on her but may also be a murderer; and her only help may be a pre-teen from a dysfunctional family—yet, through all that happens in the course of a terrifying evening, she manages to keep her head. And in a believable way too: she does come close to panic at times, but always, her intelligence sees her through. A very spunky, sharp woman (even Talman ends up admitting: “What a woman”), and fabulously portrayed by Ms Hepburn.

Alan Arkin is chillingly superb as Roat. He’s evil through and through—you can hear it in his drawling, accented voice; you can see it in that expressionless face (the sunglasses add to the effect); and you can feel it in the merciless way in which he goes about getting what he wants, playing a cat-and-mouse game with Talman, Carlino, and Susy. He should’ve got an Oscar for this. (Alan Arkin himself said he wasn’t surprised he didn’t even get a nomination: you don’t get Oscar nominations for being nasty to Audrey Hepburn!)

There are a couple of weak points in the plot. Not jarring enough to ruin the film, but they’re there.

Nevertheless, a film in a class by itself. If you’re at all keen on thrillers, don’t miss this one. And if you scare easily, don’t watch this if you’re home alone.