Prabodh Chandra Dey—better known as Manna Dey—turns 90 years old on May 1, 2009. A long innings, and though with too little recognition (in fact, far less than a talent like his deserves), a superb one. In my opinion, Manna Dey’s was one of the most beautiful male voices to have ever sung playback for Hindi cinema: warm, sensuous, and with a glorious smoothness, throaty and full of feeling, that’s unparalleled. Listen to him sing a qawwali, a raag, a rock-and-roll number—all with equal ease, panache and conviction, and it’s easy to become a fan. Happy birthday, Mr Dey; may you and your songs live long!

And now, on to the post itself: ten of my favourite Manna Dey songs, all from films I’ve seen. My favourites are grouped at the beginning of this list (the first half), but other than that, I’m not putting these in any order: each song is a gem as far as I’m concerned.

1. Ae mere pyaare watan (Kabuliwala, 1961) – Music: Salil Choudhary, lyrics: Prem Dhawan. My favourite patriotic song; it never fails to give me gooseflesh. The lyrics, evoking the much-loved memories of a faraway homeland, are poignant, but so is the immense feeling with which Manna Dey sings this song. The orchestral music, by the way, is very subtle and minimal: it’s Dey’s voice that provides most of the rhythm. 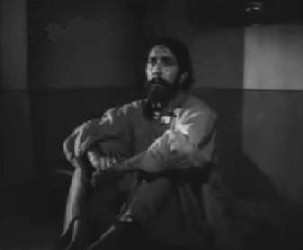 2. Zindagi kaisi hai paheli haai (Anand, 1970) – Music: Salil Choudhary, lyrics: Yogesh. This, to my mind, is one of Hindi cinema’s loveliest songs—in more ways than one. Salil Choudhary’s music, soaring and beautiful, is matched by the picturisation: the balloons lifting into a blue, blue sky; Rajesh Khanna, ebullient though doomed, striding down the beach, sandals in hand—and Manna Dey’s voice. He captures the lyrics and the mood of the song brilliantly, in a voice superficially (even triumphantly) cheerful, but with sad depths. Superb.

3. Poochho na kaise maine rain bitaayi (Meri Surat Teri Aankhen, 1963) – Music: S D Burman, lyrics: Shailendra. I’m not a fan of classical music, but this song is awesome. It’s based on the morning raag ahir bhairav, and S D Burman derived it from a Nazrul geet. What makes it special is the controlled yet emotional way in which Manna Dey sings it—you can hear the trained classical singer, and you can feel the anguish of a man rejected by the world simply because of his looks.

5. Kaun aaya mere mann ke dwaare (Dekh Kabira Roya, 1957) – Music: Madan Mohan, lyrics: Rajinder Krishan. Anoop Kumar plays the role of a classical singer in Dekh Kabira Roya (incidentally, one of my favourite comedies of the 50’s and 60’s)—and in this song, Manna Dey sings playback for a song that has a classical feel to it. It’s a beautifully lilting tune, sung with all the exuberance and pure joy of first love.

6. Kasme vaade pyaar wafa sab (Upkar, 1967) – Music: Kalyanji-Anandji, lyrics: Indeevar. If O meri mynah and Kaun aaya mere mann ke dwaare are Manna Dey at his brightest and bubbliest, Kasme vaade pyaar wafa sab exemplifies the depth of emotion Manna Dey could infuse in a lament of utter cynicism. In an interview, Manna Dey once said that this was his favourite of all the songs he sang for Kalyanji-Anandji. He also had a story to tell: the day after the song was recorded, he received a phone call from Lata Mangeshkar, who said that the song had moved her to tears. I can understand why.

7. Dil ka haal sune dilwaala (Shree 420, 1955) – Music: Shankar-Jaikishan, lyrics: Shailendra. The folksy Manna Dey, in another song that’s somewhat cynical, but in a lighter vein: more anti-establishment than anything else. I love the rhythm of this tune, the cheery crescendos, the humorous punchlines (I can almost imagine Manna Dey rolling his eyes as he sings Yeh toh hai thaanedaar ka saala!), the easy fitting in with the picturisation. And who said only Mukesh could sing effectively for Raj Kapoor?

8. Yeh raat bheegi-bheegi (Chori Chori, 1956) – (with Lata Mangeshkar) Music: Shankar-Jaikishan, lyrics: Hasrat Jaipuri. Another example of Manna Dey singing playback for Raj Kapoor, in a gloriously full-throated duet with Lata. Chori Chori had some excellent Manna Dey-Lata Mangeshkar songs, but I particularly like this one, with its hint of yearning, a desire for something that may be out of reach—but then maybe not. Very romantic.

9. Ae meri zohrajabeen tujhe maaloom nahin (Waqt, 1965) – Music: Rafi, lyrics: Sahir Ludhianvi. Romance of a more mature kind, in one of what Manna Dey lists as his own favourite songs. Ae meri zohrajabeen is one of those evergreen qawwalis (it was based on an Afghan song) that are absolutely unbeatable. And instead of being boisterous—as many qawwalis are wont to be—this one’s affectionate and playful. Manna Dey’s voice has a softly mellow and loving tone that makes this the perfect paean to a wife of many years! 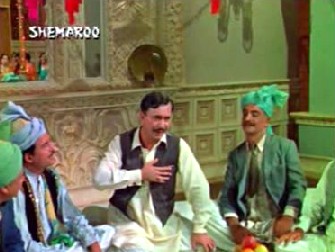 10. Tu pyaar ka saagar hai (Seema, 1955) – Music: Shankar-Jaikishan, lyrics: Shailendra. I’ve always held that I’m not a bhajan freak; I like Allah tero naam, but that’s about it. For some odd reason that I haven’t been able to fathom, I’d forgotten about this one, another fabulous Manna Dey song. His voice has a smoothness, a quiet calm that reflects the lyrics effectively, praising the Almighty, and acknowledging mankind’s own dependence on a greater power. 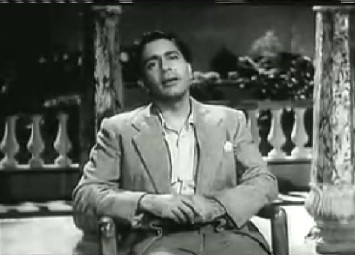 A friend of mine—an exceptionally witty young woman who has the depth, the character and the wisdom one wishes more Hindi film heroines of the 60’s would have been depicted with—is a die-hard Manna Dey fan. In fact, she admitted that she once had a crush on Manna Dey, all because of his gorgeous voice. Well, girl: count me in. After hearing so many of his songs over the past few days, I’m veering towards a crush myself.

69 thoughts on “Ten of my favourite Manna Dey songs”