I’m very fond of Bina Rai. I’m also a fan of Premnath in his pre-paunchy days. And a film that starred both of them? I didn’t even bother to try and find out what it was all about. So, when I began watching it and saw this, it made me sit up a bit:

Offhand, I couldn’t remember what Judges 14, 15 and 16 was all about, but that gets resolved within the first couple of minutes of the film itself. After a quick disclaimer that the settings and characters of the film are purely fictitious, we get into the thick of the story, with an introduction to Aadil (Premnath). Aadil lives in a village with his widowed mother, and (unlike every other man we encounter during the course of the film) has long hair—which is tied back into a definitely sissy plait, complete with a ribbon: 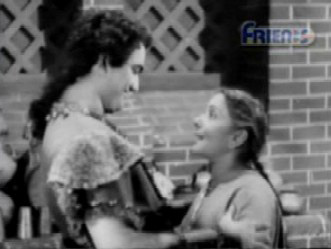 He’s also very, very strong. [Ah, now I’ve figured out what Judges 14-16 is all about].
The military commander (Hiralal) of the empire has just ridden into Aadil’s village, along with his soldiers. He’s the bearer of bad news: the king has decided to build himself a new palace, and needs volunteers to do the hard work. 200 men from Aadil’s village have to report on duty. When everybody remains silent, the commander gets antsy and asks what the problem is. An old man finally says that the harvest is due, and no men can be spared.

With Ruhi’s father dead, Aadil takes Ruhi to his home, where it soon becomes apparent to all (except Aadil himself) that the girl’s fallen for him in a big way. Aadil’s mother seems especially pleased and is all for Ruhi getting married to Aadil soon. Nobody seems to think it necessary to ask Aadil what he thinks. 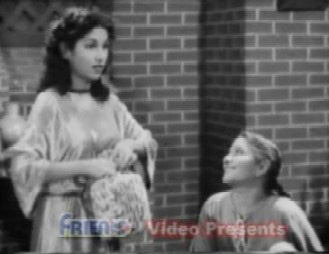 The scene now switches to the king’s court. The king (Ulhas, wearing an idiotic tunic with fur-topped boots that make laughter bubble up in me every time he appears on screen) is being entertained. The dancer, Juhi (Bina Rai), is the king’s fiancée, though she seems more a mistress than anything else.
The dance over, the king confesses that he’s finding it difficult to control his lust for Juhi (well, he’s not quite so blunt, but that’s approximately what he says). She suggests he go hunting and offers to accompany him. 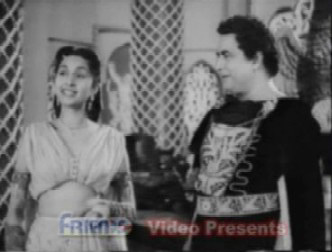 So the next day, with a bunch of soldiers along, Juhi and the king go hunting, in separate chariots. Juhi’s horses run away with her and dump her in a rocky area, where a lion emerges from a cave and starts prowling after Juhi.
Juhi’s shrieks attract the attention of a passerby (Aadil! Hallelujah!), and he comes to her rescue, wrestling with the lion, and finally sitting on it while throttling it.

Juhi is quite dazzled by this paragon of masculinity, and though she returns to the king (with Aadil following), she’s obviously now smitten with Aadil. The king, however, doesn’t notice, and is magnanimous when Juhi insists that Aadil be suitably rewarded. Aadil is designated a military commander (nobody raises the question of how he’ll share power with the guy who already occupies this post), and at Aadil’s behest, the king agrees to revoke the forced labour.

Now that Aadil’s become military commander, he of course has to go off to the capital to attend on the king. Ruhi, still mum about her love for Aadil, is heartbroken: 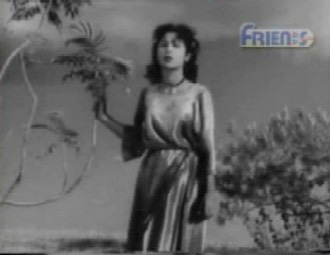 …But he is enjoying himself, watching a dancer perform (the king and his officials seem to spend more time on entertainment than on affairs of state). Aadil is little aware that he, in turn, is being watched by Juhi.
Juhi admits to her nosey maid Yasmin (Roopmala) that she is besotted with Aadil.

With Yasmin’s help, Juhi meets Aadil in the garden and though he doesn’t seem particularly interested in her, she bulldozes him into agreeing to teach her archery. 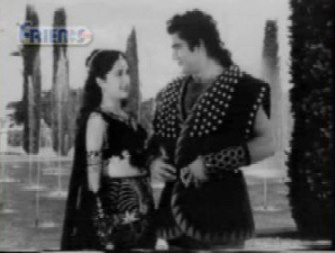 Over the next couple of days, what with the archery lessons and Juhi’s blatant attempts to get a still-reluctant Aadil to visit her, the situation starts getting convoluted. The commander (no doubt furious at being displaced by a rural upstart) draws the king’s attention to the growing chumminess between Juhi and Aadil. The king, probably realising he’s no match for someone who looks like that, even with a braid hanging down his back, decides to take punitive action—by reinforcing the forced labour order he’d rescinded earlier. I’m not sure how this will stop a romance from blossoming between Juhi and Aadil, but okay. 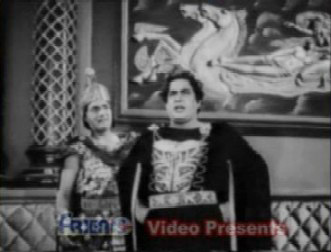 Fortunately for the king, Juhi’s quite capable of botching up her love life all by herself. She piles on pretty heavily, and Aadil gives her the boot by telling her he doesn’t have room in his life for love and other such stupidity.
Then, having discovered that forced labour is back in fashion, Aadil turns rebel and rides off towards his village, leaving Juhi vowing vengeance at being spurned.

The military commander and his men set out to arrest Aadil, but they haven’t reckoned with his might. He climbs a hill and defends it against an entire platoon by hurling huge boulders, until all the attackers retire hurt. 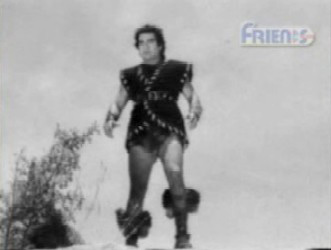 The king throws a fit when his bedraggled and bruised army returns empty-handed. Juhi then offers to capture Aadil for the king, on two conditions: one, that Aadil will not be physically hurt; and two, that he will be handed over to her so that she can put him in chains and make him her prisoner.
The king is anyway at the end of his tether, so lets her have a go.

Juhi goes off to the hill that Aadil’s still camping on. There, she strikes camp along with Yasmin, and Aadil turns up soon enough to ask her what she’s doing in the vicinity. He’s still not interested in her, but Juhi changes all of that by singing a song (Aankhon aankhon mein) and Aadil wakes up to the fact that he loves her. Yes, very sudden. But the film has to get a move on, you know. Before we know it, they’re spending all their time together, and there’s much billing and cooing happening. In the midst of all of this, Juhi asks Aadil the secret of his prodigious strength, and he tells her it lies in his hair: cut off his hair and he’ll be as weak as any other man.

Juhi, devious woman that she is, offers Aadil a glass of sherbet (which she’s drugged), and once he’s tossed it off and fallen asleep, snips off his hair and calls the guards. Poor Aadil, still asleep, is put in chains and taken away, leaving behind a smug Juhi.

The king has the helpless Aadil blinded. Ruhi arrives shortly after with Aadil’s mother, who screeches, “Zaalimon ne tumhaari aankhen phod deen!” (“The brutes poked your eyes out!”). Yes, well. As if Aadil didn’t know. The commander shoves the old woman away, she bangs her head on a rock and dies. 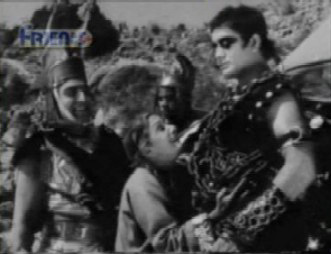 What I liked about this film:
Premnath and Bina Rai: they look so beautiful together. Yes, Premnath does go through the latter part of the film looking like an outsized raccoon in a too-short tunic, but still. This, by the way, was their first film together and they got married shortly after. 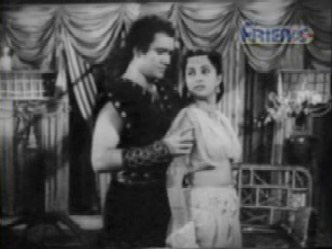 Juhi’s character is interesting—much more so than the original Delilah of the Bible had been. This being Bollywood, she isn’t as ruthless and mercenary as her Biblical counterpart, but her motives are clearer and better etched.

What I didn’t like:
The dialogue’s too theatrical. The acting’s adequate, but the effect is spoilt by the actors having to spout the most ludicrous of lines.

But I do have to applaud the producers for putting in that initial disclaimer about the setting of the film being a fictitious land. That was a smart bit of work, because the setting is such a mishmash of styles from across time and space, that there’d have been no accounting for it otherwise. Most people at court, for example, wear what looks like ancient Roman garb (though I’m not sure about the furry boots: Asterix-era Gothic?), but the palace itself resembles the Victoria Memorial:

Ruhi and Aadil’s mother wear clothes that reminded me of the Middle East—possibly Israel? In this screen cap, though, the mother’s wearing something with long fringes à la early 1800’s American Frontier. 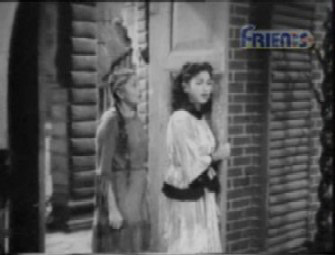 Still, not unforgivably irritating, as a film. And, though some might think me heartless, I got lots of laughs out of looking at poor blinded Aadil. Premnath looks more hilarious than pitiable with his two black eyes (especially as you can see his eyes gleaming brightly in the middle of all that blackness). The king’s a hoot, too, with his tunic riding dangerously high in front. Plenty of unintentional humour here.

A word of warning: Try not to see the Friends VCD of this film. Although I didn’t have as unnerving an experience as Richard did, the print’s bad, as you can probably guess from the screen caps.