Ghadi, in Hindi, can mean either a watch (as in a wristwatch or a pocket watch), or a brief length of time. I went through a good bit of life thinking this film was about a moment in time—romantic, most probably.
So this is where I own up: enlightenment dawns, buddhoo becomes Buddha. The ghadi in Anmol Ghadi is actually a watch: a pocket watch with a fob and chain. And it plays an important part in the story of Chandra and Lata, Prakash and Basanti, the protagonists of this tale.

The film begins in Chandra and Lata’s childhood. Lata is a rich man’s daughter, while Chandra is the only son of a poor widow (Leela Misra, looking awkwardly thin and young). Lata and Chandra are good friends and spend nearly all their time together.
All this happiness is brought to an abrupt end by the news that Lata’s father, a government employee, has been transferred out. Lata comes to bid farewell to Chandra, and gives him a watch as a going-away present. 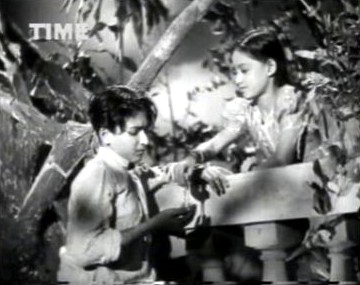 Chandra tells Lata to wait while he goes and fetches something to give her in return, but while he’s gone, Lata is dragged off to join her family. She goes off, never to return again, and Chandra is quite disconsolate.

After some cajoling, Chandra agrees. Mother in tow, he shifts to Bombay, where Prakash finances the setting up of a music store for him.
And it is to this music store that society girl Basanti (Suraiya) one day comes with her broken sitar. Chandra mends her sitar for her, but scoffs at her questionable skill when she starts playing. He shows her how to play the sitar, and Basanti is enchanted. 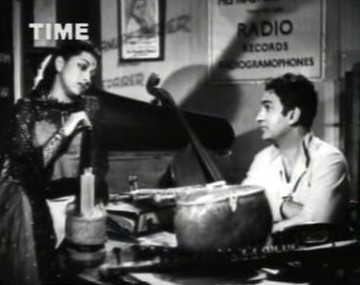 Chandra, however, is oblivious. His heart is safe with his childhood sweetheart Lata, so what if he has not the faintest idea where Lata is now.
But serendipity favours the romantic, and Chandra has a remarkable stroke of luck. In a book by an author called Renu, he comes across a story that’s exactly the story of him and Lata when they were children. This can’t be coincidence, Chandra decides. This Renu must know Lata. Here’s his chance of finding Lata again: he can write to Renu, arrange to meet her, and find out Lata’s whereabouts from her.

All excited, Chandra dashes off a letter to Renu, care of her publisher. The editor, who acts as a sorting office of sorts, receives the letter and sends it on to Renu, who is—wonder of wonders! —Lata herself! What’s more, Lata is the best friend of Basanti, and the two girls are indulging in a laugh as they read through the often idiotic fan mail Lata’s received. The majority of her fans seem to be male, and in time-honoured Hindi cinema style, in love with her even though they’ve never met her. Many of them invite her to meet them, and in a light-hearted moment, Basanti persuades Lata that they should meet one of her fans, a soulful creature who’s written that Lata seems to be able to read his very thoughts.

Lata isn’t too keen, but Basanti coaxes her, finally offering to pretend to be Renu. What a lark it’ll be, she says.
And so our heroines go off to meet this soulful fan. 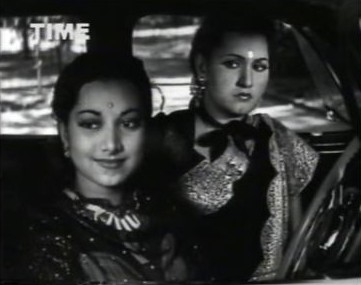 Lata, since she hasn’t been in favour of this escapade, stays put in the car while Basanti keeps an eye out for the man ‘Renu’ is supposed to be meeting. Whom she does spot, instead, is someone she hadn’t expected: Chandra. Basanti goes off to chat with Chandra, and he shakes her off with some difficulty, but not before he’s inadvertently dropped his watch.
Basanti goes back to the car and tells Lata all about the young man she’s in love with. Finally, with a flourish, she unearths the watch he’d dropped—and Lata, in one shattering moment, recognises it as the watch she’d gifted years ago to Chandra.

While Lata is nursing a broken heart, Basanti is delirious with happiness. After crooning and cooing over the watch a bit, she goes to return it to Chandra, who is very grateful. He admits to Basanti that he’d been frantic with worry at the thought of having lost the watch. Basanti also realises the awful truth: that Chandra is in love with someone else. Lata, when Basanti bares her soul to her friend, is sympathetic but also puzzlingly pleased and hints at having regained a lost love.

Will the watch, once given as a token of childhood love, finally come full circle? Instead of drifting from Chandra to Basanti and back again, will it find its way back to Lata? Or will—as Chandra’s mother had once sadly foretold—the gap between wealthy and poor be too wide for either to ever bridge it?

What I liked about this film:
Naushad’s music. It’s by far the best thing about this film, which is chockfull of songs. Personally, I like Noor Jehan’s songs the best: Aawaaz de kahaan hai duniya meri jawaan hai, Jawaan hai mohabbat haseen hai zamaana, and Aaja meri barbaad mohabbat ke sahaare in particular. The music is fabulous, of course, but what makes it sublime is Noor Jehan’s voice: glorious.

The acting. I haven’t seen too many pre-1950’s Hindi films, but those that I remember seeing are invariably marked by theatrical acting—Sohrab Moti’s ‘declaiming to the skies’ is a prime example. Anmol Ghadi is refreshing in that the acting isn’t theatrical. Mehboob, who directed this film as well as the blockbuster Aan, definitely did a better job with Anmol Ghadi.

Noor Jehan. Her voice is lovely, and though she’s not classically beautiful, she has a screen presence that puts everybody else completely in the shade.

What I didn’t like:
There’s too little story and just too little happening. I don’t mind a film that moves slowly or has a very simple plot, as long as something concrete happens: character development, for example. The problem with Anmol Ghadi is that the bulk of screen time is taken up by songs. I’d have preferred it if more time and attention could have been diverted towards giving the audience a deeper insight into the characters. And, of course, the watch. For a film called Anmol Ghadi, and in which a watch actually had plenty of potential to be an important plot element—it’s badly messed up. There was scope here to make the watch a more intrinsic part of the plot, not merely a now-here, now-forgotten symbol of love (and of the divide between rich and poor), but it peters out into nothing.

My final take on Anmol Ghadi? Pleasant enough, but other than the songs, not leaving a lasting impression. An hour after I’d seen the film (less, perhaps), I couldn’t remember much of what happened, especially in the last half-hour or so. On the other hand, it’s not rife with self-sacrifice and misunderstandings, so it is, at least, not hard to sit through.