My introduction to this film occurred when I was perhaps 12 years old. At the time, my sister and I relied mainly on Doordarshan–India’s sole TV channel way back then–for entertainment. A half-hour programme of Hindi film songs called Chitrahaar used to be among our favourite programmes. One day, on Chitrahaar, we saw Thandi hawaaein lehraake aayein. Both of us had heard the song before; one couldn’t live in the same house with a music-lover like my father and not have heard it—but we’d never seen it.

I don’t recall the exact conversation that followed, but I think I can paraphrase it pretty easily.

My father said that was Premnath, and we stared in disbelief. Premnath, for us, was a paunchy and rather repulsive figure from Johnny Mera Naam. By that time, Thandi hawaaein was over and we told ourselves we must have been mistaken. It took a few years—and Doordarshan’s telecast of Naujawan—to admit that yes, that figure we had seen was as handsome as we’d thought. And yes, also that he was Premnath. Not the Premnath of the 70’s (even the 60’s, as evidenced in Teesri Manzil), but a slender, broad-shouldered gorgeous Premnath who looked good enough to eat. 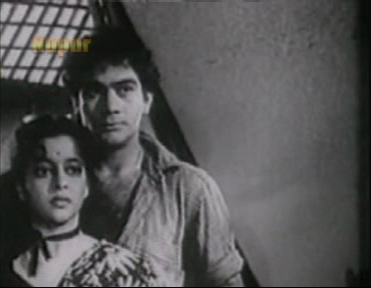 So now that you know what is the best thing about this film, I can proceed with telling you what it’s all about.

Our hero makes a very brief appearance right at the start of the film. He’s Raju, a mechanic who works in a garage, repairing cars. One day, Raju’s best friend, neighbour and colleague (?) comes racing in, looking for his sister Shyama (?). Raju says Shyama must be home, so her brother goes running off home to tell Shyama the bad news he’s just read in the newspaper: that Shyama’s beloved, the wealthy Kishore (?—someone help me with the cast, please!) has jilted her and is getting engaged to the equally wealthy Kamla (Nalini Jaywant). Shyama is heartbroken.

The scene now shifts to Kamla’s home, where it turns out that Kamla isn’t keen on marrying Kishore at all. Kishore is a dimwit and a wimp, as we soon discover in his conversations with his father (S N Bannerjee). Dad bullies Kishore into doing just about everything, and is now making no bones about the fact that he wants Kishore to marry Kamla for her money.

Kamla’s father (? Is this Nawab Kashmiri, one of the top billed actors in the cast?) throws his weight about with equal, if not more, disregard for other people’s feelings. When Kishore and his father arrive for the engagement, Kamla’s father makes it very clear to them that he’s agreed to the match because of their lineage. Kishore may be a moron, but he’s a moron with a good blood line. If it weren’t for that pedigree, this marriage wouldn’t ever take place.

Just before the engagement, Shyama sneaks into the house and tells Kamla that Kishore is hers.

Kamla is by now getting frantic. Fortunately, she has a steadfast friend by her side: her cousin Bimla (Yashodhara Katju), who also stays with them. Bimla suggests a way to stall Kamla’s looming engagement: pretend Kamla already has a beau. Kamla is jittery and tongue-tied and nearly chickens out of the entire plan, but Bimla’s made of sterner stuff: she soon convinces her uncle that Kamla cannot possibly marry Kishore because she loves someone else.

The uncle is stunned, but he loves Kamla deeply (not something I’d have suspected, seeing the callous way in which he was marrying her off). So he listens. And asks some questions. Who is this man? What is his name? Where does he live? Bimla and Kamla, groping for answers, hurriedly invent a lover for Kamla. Raj Kumar Saxena, they say; he lives in Burma.

Kamla’s father gives her an ultimatum: write to this Raj Kumar Saxena and summon him. If he arrives within 15 days (and of course if Kamla’s father approves of him), Kamla and Raj Kumar will get married. If he doesn’t turn up, or if Daddy doesn’t approve, Kishore will be summoned.

Now starts the fun. What do Kamla and Bimla do? Where do they produce a Burma-resident Raj Kumar Saxena from?

Bimla, ever enterprising, finds various candidates for the role—it’s not mentioned, but she seems to have advertised. Or used her social connections? All the men, surprisingly, have silly little moustaches and shifty eyes. Kamla is apprehensive; what will happen at the end of the 15 days? She doesn’t want to end up married to a stranger. Bimla tells her to stop worrying; they’ll sort out later. The priority is to get Kishore out of the way.

We now have an inexplicable, unnecessary and silly digression from the plot.

Kamla goes to meet (and hire) one of these prospective bridegrooms at a restaurant. The deal is interrupted by a huge furore—a woman sitting next to Kamla finds her bag missing and Kamla discovers that 500 rupees have been stolen from her too. Worse, the woman accuses Kamla of having stolen her bag. They end up in the police station, where Kamla is bailed out by a helpful man who pays off the nasty woman, escorts Kamla out—and then proceeds to pinch the expensive necklace Kamla’s wearing.

Bimla’s search for a makeshift beau for Kamla now brings her to a certain Preetam Pandey (?), an admirer of Bimla’s. Bimla is certain that Preetam will agree to pretend to be Raj Kumar Saxena until a more suitable solution can be found.

Bimla therefore takes Kamla—the latter pretending to be an ayah (why, the film doesn’t divulge, or Nupur Video have been doing some hectic editing). And while Bimla is away talking to Preetam Pandey, Kamla finds herself accosted by an admirer who tells her, without any preamble, that she’s the woman of his dreams. It’s Raju, whom we’ve met before.

One chance meeting (which is all huffy indignation on Kamla’s part), and she’s smitten. Soon after, again at the same park, Kamla meets Raju again, and discovers two startling facts about him:

She’s so rattled that she overbalances and falls into a pond. When Raju tries to rescue her, he falls in too. The episode ends with Raju taking Kamla off to his home to dry off.

He manages to get her a change of clothes from Shyama next door, and Kamla, all dried and changed and looking like a gaon ki gori–a village belle—admits that she finds Raju very attractive. There’s much shy simpering (on her part), and some teasing flirtation (on his). 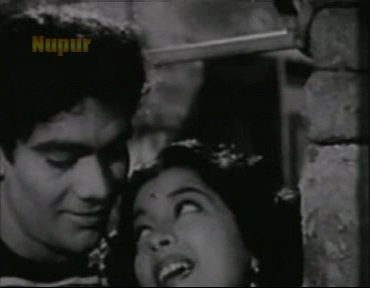 Raju goes off to work after a while, and when he returns, tells Kamla to change back into her own clothes. At this point, either the editor goes to sleep or Nupur strikes again—Kamla tells Raju that she has “told Shyama everything”. Huh? When did this happen? And why? And why does Kamla’s having told Shyama everything permit Kamla to keep wearing Shyama’s clothes? Why does she want to, anyway?

There’s a bit of a squabble here, with Kamla clinging onto the clothes as she rushes off in a taxi, and Raju yelling at her to return the clothes, as he follows on top of a lorry with which he’s hitched a ride.

He follows her all the way home and barges in. When Kamla’s father asks who this barbarian is, Raju tells him that Kamla and he are an item—only to have Kamla deny that she even knows him. That’s not a nice way for a Hindi film heroine to behave. 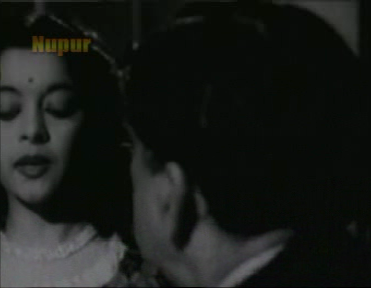 Raju storms off. Obviously. You can only push a self-respecting mechanic this far.

Then, a few days later, he runs into Kamla again. She’s been out by the beach, mooning about, when her car conks out—and the nearest garage, when she arrives there, happens to be Raju’s. While he goes about repairing her car, Kamla tries to tell him why she denied him in front of her father; she’d wanted to introduce him to the old man in her own time (considering Dad as given her a deadline, she doesn’t really have much time). Plus, she didn’t like the way Raju barged in. Why couldn’t he have at least cleaned up a little before coming?

Our man doesn’t take this at all well. He’s a mechanic, he says; a labourer. If she can’t bear his grease and filth, she’s welcome to her own pretty world. Goodbye!

When Raju asks for payment for the repairs on her car—Rs 2.50—Kamla hands him Rs 2,000. She says she doesn’t have change, and Raju flings the money in her face. They’re both furious and bitter, and there’s a lot of emotion in this entire scene (it’s a long one, too: 10 minutes). Mostly, it’s anger and a sense of having been betrayed by each other, but there are also moments of almost-sexual tension.

It ends with Kamla flinging the money back at Raju, telling him that the balance Rs 1,997.50 is a reward for him. He can do what he wants with it.

So what does he do but turn up that evening at her home, smartly dressed and introducing himself to her father as Raj Kumar Saxena, the man from Burma? 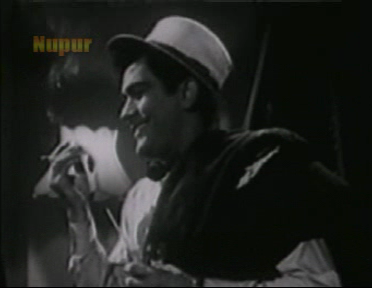 Now what? Why has Raju really come to her house? Is he, perhaps, really a wealthy man who’d been in disguise? Or is a makeover on the cards? How do rich and poor—if actually poor—reconcile? Do they, even?

Premnath and Nalini Jaywant. Both leads make for great eye candy, and they’re fabulous together: not just do they look wonderful, there’s also superb chemistry here.

The music! Although S D Burman didn’t give Naujawan one of his all-over great scores, the film does have some fine songs. Thandi hawaaein lehraake aayein is my favourite, and there’s the delightful O piya piya piya piya, picturised on a Cuckoo and a bunch of admiring extras on the dance floor. And Jiya jaaye piya aaja, a beautifully soulful Lata song.

The bit that ends with Kamla’s necklace getting stolen. What was that episode doing in this film? It has nothing important to do with the rest of the plot.

And one other thing: did you notice that most of the screen shots have actors in one corner or the other of the frame? I don’t know if this is the fault of the director/cinematographer or Nupur but it’s very irritating to watch a scene with only half or less of an actor’s face visible through most of it.

The odd thing about Naujawan is that the two halves of the film—the point at which Raju chases Kamla into her own home in pursuit of the clothes on the one hand, and everything beyond that on the other—seem as if they’re from two separate films. Part 1 is frothy and funny, what with Bimla and Kamla’s attempts to prevent her having to marry Kishore; Kamla’s meeting Raju and her banter with him; Kishore’s father, Kamla’s father, Bimla’s mad excuses to her uncle on Kamla’s behalf… and then, Part 2. Suddenly, all the humour goes out the window and it becomes dramatic and emotional. Bimla does provide some comic relief, but it’s minuscule.

Still, I liked Naujawan a lot. It was absorbing, it was romantic, and it had Premnath (and Nalini Jaywant). What’s not to like?

Oh: and just because I couldn’t stop taking screenshots, here’s one lovely one. Enjoy!