Then there’s this film, about a relatively little-known (in popular lore, that is) member of the Mughal royalty. The princess Jahanara, eldest daughter of the Emperor Shahjahan, was a powerful and wealthy personage in her time. Jahanara was 17 years old when her mother, Mumtaz Mahal died after bearing Jahanara’s youngest sister, Gauharara. To Jahanara fell the task of ‘looking after’ the family; it was said that Shahjahan was too grief-stricken to be head of the family in anything but name any more.

Soon, Shahjahan shifted the imperial capital to Delhi. The emperor commissioned the building of the Red Fort and the imperial mosque, the Jama Masjid; the emperor’s wives, like Akbarabadi Begum and Fatehpuri Begum, built mosques; and Jahanara laid out the stretch of marketplace known as Chandni Chowk. She also laid out extensive gardens next to Chandni Chowk, along with an exclusive sarai for wealthy Persian and Uzbek traders coming to Delhi. When she died, at the age of 67, Jahanara was a wealthy woman, with an annual income of Rs 11 lakhs from her jagirs (lands) and from trade.

That is fact. There is also plenty of juicy gossip, which may or may not be fact. For instance, one oft-repeated rumour has it that Shahjahan shared an incestuous relationship with Jahanara after the death of Mumtaz Mahal. Another tale has it that Jahanara (and other princesses, for that matter) used to have lovers smuggled into their apartments through hidden passages. There’s even a story that one such lover was nearly caught, and took refuge in a large cauldron—whereupon the emperor (probably Aurangzeb) had fires lit under the cauldron, cooking the poor lover (Does that ring a bell? Shama Parwana?)

And then there is this film, where Jahanara is a tragic heroine, all sinned against, never sinning. 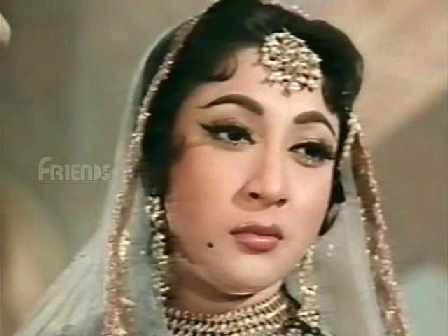 It begins with Jahanara as a child (Baby Farida). Jahanara is very fond of poetry, and hosts poetry sessions with other children of the court. Of these, the one who most impresses Jahanara with his poetry is Mirza Yusuf Changezi (?)
When Mirza Changezi’s father is appointed the governor of Gujarat, the boy comes to bid farewell to Jahanara. They promise to keep in touch… 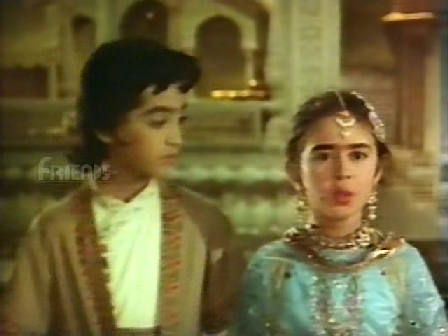 …and do so using pigeons to carry their verses between Gujarat and Agra. Time passes, and Jahanara (now Mala Sinha) has grown up. She is still enamoured of Mirza Changezi’s (now Bharat Bhushan) poetry. So much, in fact, that when he finally comes back to Agra and presents himself at court, it doesn’t take the two of them long to realise that their childhood friendship has blossomed into love.

Jahanara’s faithful friend and lady-in-waiting, a Rajput woman named Karunavati ‘Karuna’ (Shashikala) is her confidant in this matter. She’s more, even, than a confidant; she is the one who eggs Jahanara on.

And she’s the one who smuggles Mirza Changezi into Jahanara’s chambers. Jahanara—chaste princess—is duly horrified, and tries to throw Mirza Changezi out, both of her rooms and her heart. But she fails miserably. We are treated to some interminable sher-o-shaayari, with the two lovers billing and cooing like the pigeons that are their best buddies.

Unfortunately for Jahanara (and ‘unfortunately’ in more ways than one – wait and see!), her mother Mumtaz Mahal (Achla Sachdev) chooses this moment to appear in the story. Only to announce her imminent departure; she’s grievously ill, and only has time enough to gasp out various admonitions to Jahanara to be a good girl and a good princess. She gets Jahanara to promise that Jahanara will never do anything to shame the royal family. 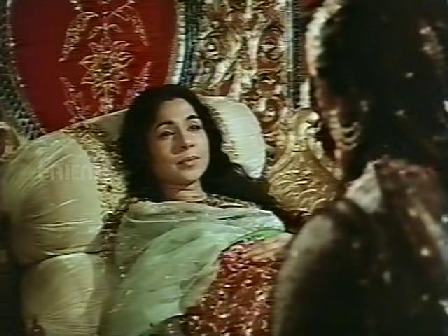 Having shot her bolt, Mumtaz cops it, leaving her children (including Indira Billi playing Roshanara, and Chandrashekhar playing Dara Shukoh) mourning her… 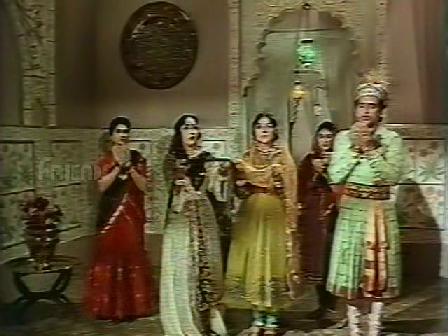 …and her husband, the Emperor Shahjahan (Prithviraj Kapoor) so bereft that his hair turns white over the space of a couple of days. (This was one of the widely believed stories about Shahjahan; some scholars have conjectured that Shahjahan may have been regularly plucking out grey hair, and suddenly stopped when Mumtaz Mahal fell ill). Jahanara tries to comfort her father, and promises him too that she will always be a cause of pride and joy to him. 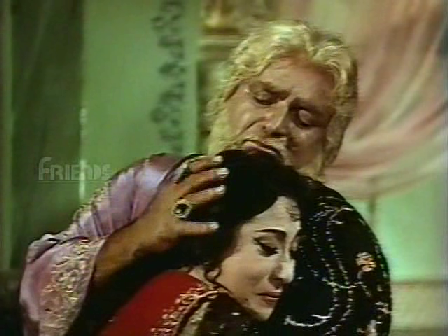 This, of course, puts paid to any thought that Jahanara may have entertained of getting serious with Mirza Changezi. She immediately lets him know that it’s all over for the two of them. This, even though Mirza Changezi has the full support and co-operation of:
(a) Karuna 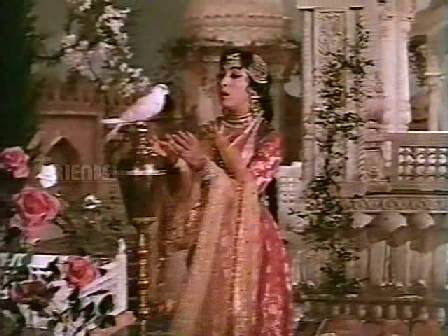 And (c) his servant, confidant and friend Gulley (Sundar) – who even goes so far as to dress up as a eunuch to smuggle Mirza Changezi into the imperial harem.

Even meeting Jahanara proves useless; she forces Mirza Changezi to agree to leave Agra and her. Reluctantly, he goes—but instead of out the way he’d come, he tries walking out the main door of the harem, where the guards stop him. Roshanara notices Karuna ordering the guards to let Mirza Changezi through, and because she is, after all, played by Indira Billi (did she ever play anything but a wicked woman?), she informs Shahjahan. She’s already managed to lay her hands on a note written by Changezi to Jahanara, which she presents to her father. 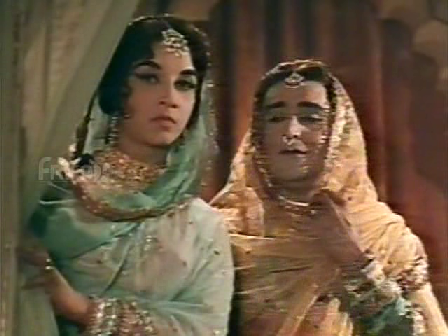 An enraged Shahjahan summons Mirza Changezi. Shahjahan is furious that anyone has had the nerve to try and romance Jahanara. Mirza Changezi is defiant and flings back, in Shahjahan’s teeth, Shahjahan’s love for his own wife, Mumtaz Mahal. The end result of this audience is that Shahjahan has Mirza Changezi flung into prison.
Dara Shukoh, on Jahanara’s behest, comes to visit Mirza Changezi in prison (his cell, by the way, couldn’t be very effective—its walls seem to be made of crumpled painted paper).

His friend, and the friend’s two daughters (Minoo Mumtaz and Aruna Irani), who are dancers and singers:

Especially the older daughter, Shabnam (Minoo Mumtaz), who is soon deeply in love with Mirza Changezi.

In the meantime, Jahanara’s life is turned topsy-turvy by her rebellious brother, Aurangzeb (Siddhu—this is the first time I’ve seen him in a historical!), who has begun to make advances on the imperial throne.

Where will all of this end? Where and how will Jahanara’s political and personal life come together (will it, even)? And what of the lover whom she believes already dead, but who is actually very much alive?

The music. Madan Mohan is one of those music directors for whom I will watch a film, and Jahanara has some of his best songs: Ae sanam aaj yeh kasam khaayein, Jab-jab tumhe bhulaaya tum aur yaad aaye, and the Talat Mahmood classics, Phir wohi shaam wohi gham and Main teri nazar ka suroor hoon.

The ladies, Mala Sinha, Shashikala, and Minoo Mumtaz. All are very pretty, and the first two have substantial roles too (Mala Sinha was nominated for a Filmfare award for Best Actress for her role as Jahanara). And yes, Aruna Irani is very cute. According to IMDB, she was only 12 years old when Jahanara was made.

There are moments of surprising sensitivity in the film. For instance, there’s this moment when, after Aurangzeb has usurped the throne and Jahanara has been ordered to go to Delhi, she tells Shahjahan that she will not leave him. Shahjahan bellows at her that he is the rightful emperor and that he orders her to go. She obeys, and walks away—then turns at the door to see her father standing, alone and forlorn, beside his throne, which isn’t even his any longer. She turns and runs back, to tell Shahjahan that she had obeyed the emperor, but will not leave her father.

First, the not-really-important stuff, the details that one can live with. The historical inaccuracies, like the vividly European baroque feel of the headboard on this bed:

Or the very incorrect ‘Mughal architecture’ in this palace:

Or the fact that everybody makes it out to be a bad thing that Jahanara is in love with a commoner. Sorry. That wasn’t the problem. The problem was that she was in love with any man. Prior to Akbar, Mughal princesses could marry; Akbar realised that this just created more claimants (or would-be claimants) for the throne, so he decreed that Mughal princesses would henceforth not marry. Jahanara was doomed to a life of solitude (or at least not married bliss), Mirza Changezi or not.

And then there is the depiction of Mumtaz Mahal’s death, a highly sanitised version. Mumtaz Mahal didn’t die in regal splendour in a gorgeous palace; she died in childbirth in the rainy season, in a muddy tent while accompanying Shahjahan on a campaign in Burhanpur.

What really got my goat, however, was the high melodrama in the film, especially in the first half. This bit of the film moves painfully slowly, with Jahanara and Mirza Changezi mouthing empty-sounding words of love to each other. That is followed by much weeping and screeching when Mumtaz Mahal dies, to be followed (when Mirza Changezi is banished and Aurangzeb starts showing his true colours) by argument and defiance, more weeping and more melodrama. I could have done without all of that.

I wish this film had focused on a more well-rounded picture of Jahanara and her times. Aurangzeb’s rebellion against Shahjahan, palace intrigues, Jahanara’s support of Dara Shukoh (and Dara Shukoh himself, who was a very interesting personality) would have made for an intriguing story. And it could have helped pass the time better than in trite poetry.

And yes, this was one film which really didn’t need the comic antics of Sundar and Om Prakash.