Hindi cinema has a tendency towards stories that stretch over long periods of time. Days, at the least, but often months, often many years too (that old trope of children growing up has been a part of too many films to name). It is the unusual film, especially in the 50s and 60s, that extends over just a few hours. Solvaa Saal was one such; Gateway of India is another. Both films are about runaway girls who meet the loves of their lives in the course of one night. That, though, is where the resemblance stops.

END_OF_DOCUMENT_TOKEN_TO_BE_REPLACED

Anu had started this month with a Dev Anand film—and I, following suit, decided I would review a relatively little-known Dev Anand film too, to begin August. But, while Anu’s kept up the Dev Anand theme all through August, I’ve meandered off in different directions, all the way from The Rickshaw Man to jeep songs. But solidarity among friends counts for something, doesn’t it? So here I am back again, with another Dev Anand film. The sort of film that, on the surface, looks like it’s got everything going for it: a suave Dev Anand opposite a very beautiful Waheeda Rehman (who, along with Nutan, was, I feel, one of Dev Anand’s best co-stars as far as chemistry is concerned). SD Burman’s music. Suspense. Some good cinematography. 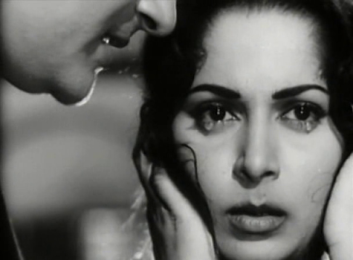 END_OF_DOCUMENT_TOKEN_TO_BE_REPLACED

For all those who thought I’d deserted classic Hindi cinema to wax eloquent about Robert Mitchum: good news. I’m back. After gushing for a week (well, a little more) about Mitch and his films, I’ve returned to Bollywood—and with a film that’s a must-watch for anyone who likes Muslim socials; who thinks Madhubala is gorgeous; or who loves old Hindi film music—especially qawwalis.
I fall into all three categories, so Barsaat ki Raat was long overdue for a rewatch.