Poor Biswajeet must have gotten thoroughly sick of romancing spooky women in the ‘60s. True, in this one, the spookiness is rather more pronounced (Waheeda Rehman was pretty sunny and un-mysterious in Bees Saal Baad; everything else seemed steeped in mystery). But there is the inexplicability of everything around, dozens of very loud and pointed hints of someone haunting an area, and a song that’s sung again and again like a broken record. 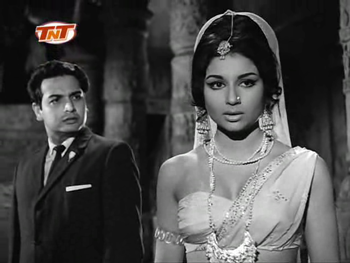 This never-to-return night [thank goodness for that] begins in daylight at an archaeological site. A renowned archaeologist, Professor Sahib (Prithivraj Kapoor) is supervising the digging up of an ancient city. With him is his assistant Rakesh (Sailesh Kumar).
Professor Sahib’s daughter Rita (Mumtaz) drops by to remind her forgetful father that the two of them are supposed to receive Suraj at the railway station. Professor Sahib begs to be excused, and a huffy Rita leaves him to his beloved ruins and goes to the station on her own. 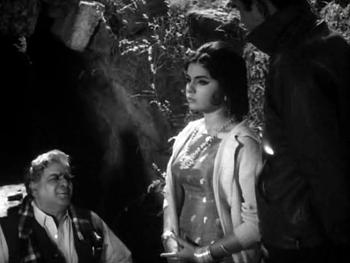 Suraj (Biswajeet), we learn, is the son of Professor Sahib’s old, long-deceased friend. Suraj has been living abroad for the past ten years, and has now returned to claim his substantial inheritance. 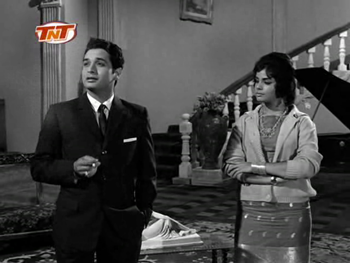 Having come home, he decides he must go meet Professor Sahib immediately, so he and Rita set out. Along the way, Suraj insists on stopping the car at an old haveli he used to frequent as a boy. He points out the old door, on which he’s scratched his name [I blame Hindi films for this fascination with defacing monuments. Shameful]. It’s an odd sort of mansion, with a bell hanging in a circular ‘porthole’, rather like a church or monastery.

They continue, and neither of them notices a very odd figure emerge [it looks like someone wearing a short, badly tailored habit on top of a full set of clothes—which reinforces the monastery impression]. This weird person comes out of the haveli and watches Suraj and Rita drive off.

Rita takes him to the ruins, where Professor Sahib and his protégé are reunited. Professor Sahib gets to deliver a brief [and rather cheesy] homily on the importance of ruins and archaeology.

Professor Sahib goes back to his work. Rita and Suraj are headed out of the ruins, when Rita remembers something and turns back. While he’s on his own, Suraj suddenly hears the jingling of ankle bells. Curious, he explores a bit, but to no avail. Little does he know that he’s been watched by a mysterious woman.

Suraj settles in at his old family home. He’s an artist and spends much of his time painting and trying to fend off the determined attentions of Rita, who is apparently pretty much in love with him. Suraj is willing to be friends (after all, they were friends in childhood, as she points out), but that’s it. He’d rather she and her friends don’t try to drag him into their picnics.

Little does Suraj know that his father and Professor Sahib, in time-honoured tradition of best friends in Hindi cinema, had arbitrarily decided that Rita and Suraj are now betrothed. [Nobody has even had the courtesy to let Suraj know all this while].

Meanwhile, Professor Sahib, Rakesh and their team have made a momentous discovery: an underground hall that’s gorgeously carved all around, and is decorated with statues. It’s quite splendid, but one of their first finds in this hall is rather creepy, and totally spooks out Professor Sahib’s helper. 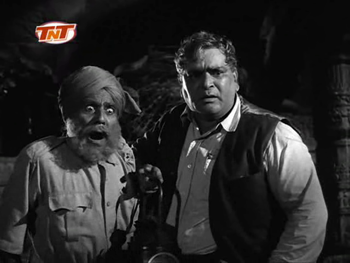 It’s a skeleton, possibly of a woman, since there’s a rather distinctive bracelet on one wrist. Beside the skeleton is also a dagger, which (along with the bracelet), Professor Sahib places in his pocket. A stiff breeze, tunnelling through the stairwell, blows the skeleton into dust [I don’t know how a breeze stiff enough to do that barely ruffles the hair on Professor Sahib’s head]. 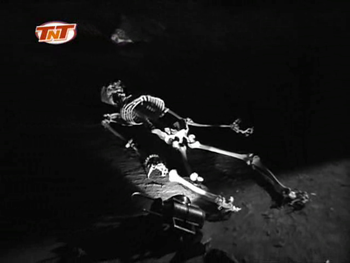 Also in the hall, Professor Sahib and Rakesh find an ornate statue of a woman dressed in flowing garments and wearing the same bracelet that Professor Sahib had found on the skeleton. Professor Sahib comes to the conclusion that this is, therefore, the statue of the same woman who’d been a skeleton until that breeze came along. 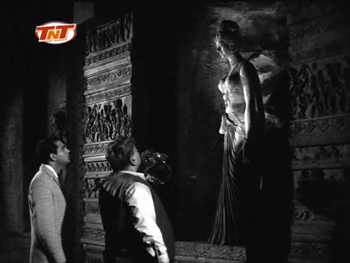 That evening, Suraj is driving down a jungle road in his car, with Rita alongside. The car splutters to a halt [Woh Kaun Thi?, anyone?], and Suraj, doing a quick check, finds that the radiator’s heated up. He’s setting out to fetch some water from a stream when he hears a woman giggle [rather maniacally, in my opinion]. The song comes on, with much mist swirling about and—after much pursuing on the part of Suraj—an inevitable meeting with the mysterious singer (Sharmila Tagore).

She’s rather overdressed for a jungle waterfall, but Suraj, besides asking if she’s not scared, doesn’t probe much. The girl, after all, is pretty daunting: she has a weird look about the eyes, and makes odd allusions to not having forgotten him, Suraj (she even calls him by that name) all these many centuries. What the—?

She then tells him her name: Kiran. [Phut go Rita’s chances of ever marrying Suraj. Suraj (‘sun’) and Kiran (‘ray of light’) go together, in Hindi films. Always. Like Neela (‘blue’) and Akash (‘sky’)]. Suraj is spooked, all right, and goes back to the car, where Rita is getting very impatient. Suraj asks her if she’d heard the giggling and the singing, but Rita says no, and is puzzled. Is Suraj quite all right?

Next, the scene shifts to an exhibition of Suraj’s paintings. [‘The one and only master of modern art’. Hmm.]

Among the crowds milling about admiring Suraj’s work, Suraj finds Kiran. She’s dressed in a more modern style on this occasion, but is as mystifying as ever. When (on being asked if this is all his corpus of art), Suraj tell her that yes, these are all the paintings he’s ever made, she contradicts him. There is one unfinished painting that is missing, she says. You were making a painting of me, and you never completed it. [Another ‘What the—?’ moment].

Having dropped that bombshell, Kiran goes off, in a horse-drawn carriage [where on earth did she get that?]. Suraj follows in his car, trying to catch up. They race through the countryside, through a tunnel—and when Suraj drives out of the tunnel, all he sees is empty road ahead. For as far as the eye can see, there’s no carriage. 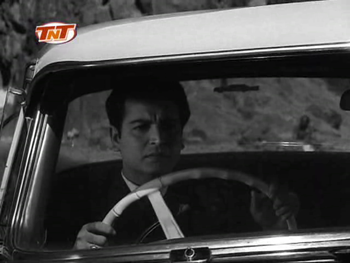 Even a labourer, breaking stones by the side of the road, denies having seen any carriage emerge from the tunnel. Suraj goes back into the tunnel, but it’s dark and gloomy—and empty.

We now have a quick break from all this What the—?’ness, with a nice little party, and a nice little song and dance by Helen and Madhumati.

…punctuated, for Suraj, by the song, all over again. He goes out, onto the bank of the lake outside, and sees Kiran being rowed along. He tries to follow on the bank, and reaches the boat only when the boatman’s mooring it to the shore. Kiran is gone.
Suraj asks the boatman (B M Vyas) where that girl is. The man [who’s just as spooky as Kiran] cackles madly and tells Suraj that Kiran is his daughter, and that they live in the old haveli—the same monastery-like place Suraj is already familiar with.

So Suraj, who’s hosting a party at his home the next day, goes to the haveli to invite Kiran. He is received by the badly-dressed monk [or whatever; he remains in the shadows and does not show his face]. Not only is the ‘monk’ badly dressed, he’s also badly behaved. Suraj gives him the message—the party invite for Kiran—and is subsequently told to get lost.

Meanwhile, Professor Sahib and Rakesh have been doing some research. They’ve discovered that the statue in the underground hall is that of a woman named Kiranmayi [does that ring any bells?]. Just about now, Rita dampens her daddy’s joy a bit by telling him about Suraj’s perfidy—that he’s going gaga about a strange woman, whom he’s probably invited to the upcoming party as well.

And, sure enough, Kiran turns up at the party. One look at her, and Professor Sahib is stunned. This woman’s dressed exactly like the statue of Kiranmayi in the excavated hall. Down to the bracelet on her wrist! [Spookiness goes through the roof].

Professor Sahib rushes to his office and opens his desk drawer, to find the ancient bracelet missing. And, when he hurries to the site and goes down into the hall—he finds Kiranmayi’s statue missing.

What is happening? Who is this mysterious Kiran who talks of a long, long association with Suraj (two thousand years, she tells him, in one conversation)? And what’s with the mysterious monk in the haveli? Is the boatman really Kiran’s father?
And why do so many people in this film look like they’re not enjoying themselves? 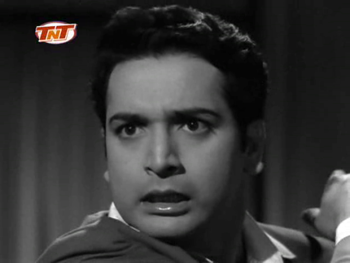 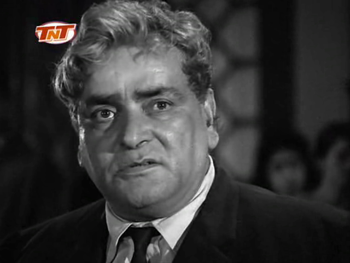 O P Nayyar’s music. My favourite song by far is the exquisite Yehi woh jagah hai, sung by Asha—my mum used to sing it to me as a lullaby when I was a baby, so it’s been a favourite ever since my brain began to register music. The song (Kiran’s signature song), Har tukda mere dil ka, is lovely, as is Aapse maine meri jaan mohabbat ki hai.

The prettiness. Sharmila Tagore is lovely, of course, and Mumtaz, while not yet as totally fabulous as she was in Aadmi aur Insaan, is very pretty too. So is Biswajeet, actually.

The unravelling of the plot. [Literally—it unravels and goes all to bits by the second half]. Hindi cinema (in the 60s, especially) used this particular story in different forms several times, and mostly with a fair bit of success. Yeh Raat Phir Na Aayegi would probably have succeeded as well, if it had been plotted with a little more of an eye for detail. After all, it does have excellent music, very popular leads, and good cinematography (courtesy the much-respected Keki Mistry).

Where it falls down is on the story. The first half of the film—when Suraj meets the mysterious Kiran for the first time, and we see the first hints of her seeming ‘ancient’ past and unfulfilled love story—are intriguing enough. Unfortunately, the scriptwriter seems to get carried away and fills up the story with lots of unnecessary spookiness that is eventually discovered to be either:

(a) actually inexplicable (for example, Suraj’s car heating up just near the very stream where Kiran is sitting and singing), or
(b) totally unnecessary to the plot (for example, the monastery-haveli and the weird monk-like character, who could as well have been dressed in a lungi, for all he contributed)

There are also some scenes that do not involve Suraj but are a ‘behind the scenes’ peek (so to say) and end up contradicting the plot, as it’s finally revealed. And, besides the minor plot holes, there’s one pretty major hole that the writer seems to have completely overlooked.

Anyway. This isn’t a Bees Saal Baad or a Woh Kaun Thi?, but if you’re in the mood for spectral heroines wandering around in gauzy white and singing songs of longing for old lovers, you might want to give Yeh Raat Phir Na Aayegi a try. Don’t use your brain too much, though.