When I posted my review of Charade a couple of weeks back, I ended up being reminded of this film. Firstly, because Charade is referred to as ‘the best Hitchcock film Hitchcock didn’t direct’. Secondly, because in the comments, a couple of readers mentioned a film in a similar vein, the Gregory Peck-starrer, Arabesque. My mind did a quick jump ahead, and came up with this: Hitchcock + Peck = Spellbound.

And, as if fate itself had decreed it, I realised just as I was beginning to write this review, that today – August 29 – is the birth anniversary (and, oddly, death anniversary, too) of Spellbound’s leading lady, the lovely Ingrid Bergman. This was the day she was born in 1915, and this was the day she died, in 1982. Happy birthday, Ms Bergman – and RIP. 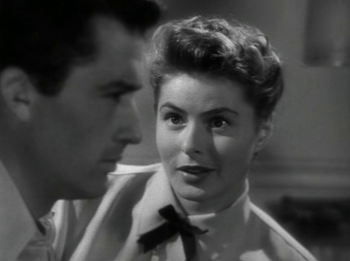 Spellbound is often regarded as one of Hitchcock’s least impressive films (he is said to have not liked it either). For me, though, this film has a special appeal, because it was one of the first Hitchcock films I ever watched. I must’ve been about 10 when I saw this, and though decades have passed since then, every time I see dark lines on a white background, I automatically think of Spellbound.

The story begins in Green Manors, an institution for psychoanalysis. This is where people with emotional problems are observed, analysed, and helped to overcome their inner demons.
One of these is Mr Garmes (Norman Lloyd), who’s convinced that he murdered his brother. Mr Garmes’s psychoanalyst, Dr Constance Petersen (Ingrid Bergman) has diagnosed this as a case of a guilt complex, and has been trying to explain it to Mr Garmes. 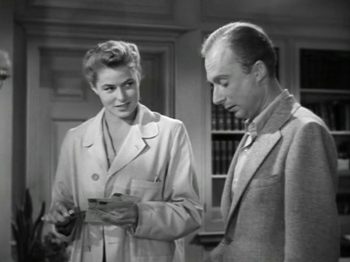 Within the first few minutes of the film, we learn more about Constance. As a colleague describes her (behind her back): “Constance Petersen, the human glacier, the custodian of truth.” This colleague, Dr Fleurot (John Emery) has reason enough to be both aware and bitter: he has been trying to woo, without any success, the lady in question.

Constance is really not interested – not in Dr Fleurot, not in romance, not in anything but her work.

Green Manors itself is on the brink of an important event: its head, Dr Murchison (Leo G Carroll) is retiring, and his replacement, the renowned Dr Anthony Edwardes, will be arriving soon. From a brief conversation between Dr Murchison and Constance, we discover that Dr Murchison:
(a) has been at Green Manors for the past 20 years;
(b) recently suffered a nervous breakdown because of overwork; and
(c) this episode is the reason for him being asked to retire.

He is not at all happy about leaving Green Manors. 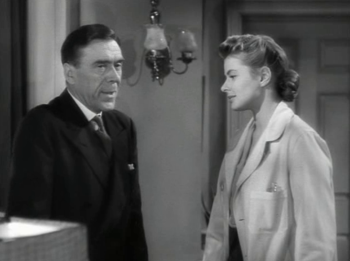 However, the inevitable must happen. Dr Edwardes (Gregory Peck) arrives, and when he meets Constance, there is instant chemistry between them. Her male colleagues are disdainful (Fleurot is, unsurprisingly, irritated that Constance seems to be so starry-eyed in the presence of Dr Edwardes).
At dinner that night, with all the doctors dining at the same round table, the conversation is proceeding fairly normally… 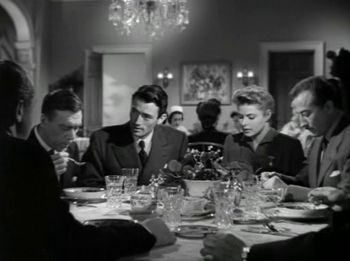 …until Constance, describing the shape of a new swimming pool to be built at Green Manors, ‘draws’ it on the tablecloth with the tines of her fork. 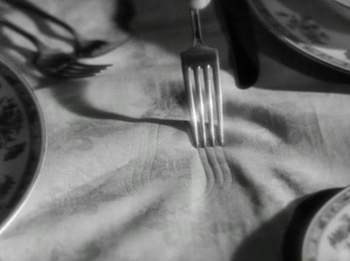 The effect, on Dr Edwardes, of this completely innocuous act is very strange: he looks very distressed, and snaps rather rudely at Constance, making a remark about the linen supplier to Green Manors having to bear with such brutality.
Constance is taken aback. Surely that was unwarranted?

The next day, while Constance is at work, she receives a brief note from Dr Edwardes, summoning her to his room: 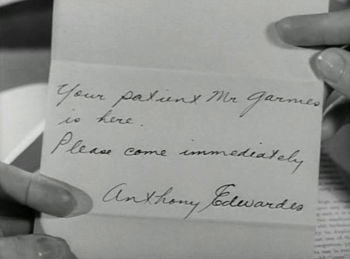 Mr Garmes is pouring out his woes to Dr Edwardes and complaining that Constance does not understand him. Constance sets about calming him down and trying to reason with him. He does recover [conveniently quickly, it seems], and is sent back to his room.
Constance is still with Dr Edwardes when he receives a phone call from an unknown woman who introduces herself as Mrs Cramer. Constance, who can’t help overhearing Dr Edwardes’s half of the conversation, hears him say curtly, “Yes, yes. But I’m very busy, and I don’t know you!”

This is soon forgotten, because Dr Edwardes invites Constance to spend the rest of the day out with him, going on a long walk. She agrees, and they go out. And, as anyone who’d seen these two together would expect, fall in love over the course of the afternoon.

Constance, on her return to Green Manors, is ribbed ruthlessly by her male colleagues, especially a sarcastic Fleurot. She doesn’t allow it to irk her, though, and tosses off any suggestion that this is true love. She asserts she’s devoted only to her work.
Whom is Constance deluding?

Not herself, at any rate. That night, tossing and turning and unable to sleep, she finally gets out of bed and goes upstairs to the library (passing Dr Edwardes’s room on the way – she notes the light shining through the bottom of the door). Constance goes on to the library and pulls out her favourite work by Edwardes (‘Labyrinth of the Guilt Complex’) – he is, after all, a well-respected academician, with several books to his name.

She then goes to his room, knocks, and when asked to enter, tells Dr Edwardes that she’d like to discuss the book with him. It’s a flimsy excuse; Dr Edwardes sees through it, and there’s a mutual confession of love. He kisses her, pulls her into his arms – and suddenly, looking down at the thin dark stripes on her white dressing gown, goes dizzy and clutches his head. 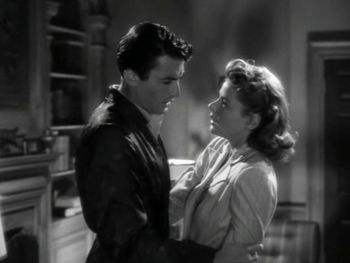 Before Constance can quite figure out what’s happening, the phone rings. Dr Edwardes answers it, and is told – by a staff member of Green Manors – that Mr Garmes has run amok and has slit his own throat. He’s now in the surgery, and could Dr Edwardes please come quickly?
Suddenly, everything is happening at top speed. Dr Edwardes and Constance rush down into the surgery, where Garmes is on the operating table, surrounded by doctors and nurses…

…and Dr Edwardes blanks out and faints.

Constance sits by his bedside once he’s taken up to his room. And while she’s watching over him, Constance remembers something that she had noticed.
The library book – Edwardes’s Labyrinth of the Guilt Complex – is one of a special edition, of which all copies had been signed by the author. Constance opens the book, and compares the signature on the flyleaf with the signature of Anthony Edwardes on the note he had sent her the previous day. 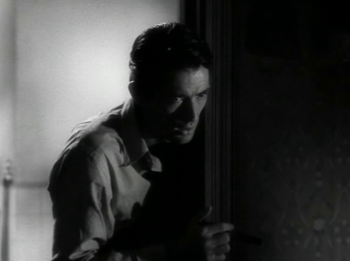 The plot moves swiftly forward, because soon everybody except Constance and the man she loves believe that he is a murderer. Even Constance’s very supportive former mentor, Dr Brulov (Michael Chekhov), is doubtful. Soon, Constance and her beloved are on the run [a classic Hitchcock trope?], trying to prove that he is innocent. A hard task, since the man himself has not the slightest recollection of who he is. 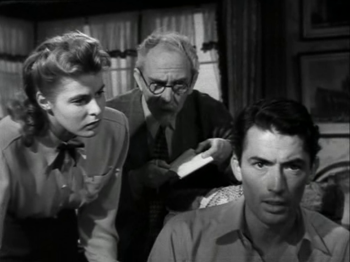 The lead pair. Gregory Peck and Ingrid Bergman are two of my favourite stars, and seeing them together is a bonus. Plus, they both look fabulous in this film; good enough to help detract from the moments of [very] slightly hammy acting.

The dream sequence. Even among those who deride Spellbound, this memorable 2-minute scene, in which Gregory Peck’s character narrates a dream, is considered brilliant. And rightly so; Salvador Dali, who designed it, uses stunningly surreal imagery – sharp angles, faceless characters, crisp black and white, a ‘melting wheel’ (which is so typical of Dali, isn’t it?). The dream sequence was supposed to have been 20 minutes long, but had to be cut down to what it is now; and it still manages to be fantastic.

Let me begin by saying that I know almost nothing about psychoanalysis, and very little about psychology itself.

With that disclaimer out of the way, I’ll say that the one thing I did not like about Spellbound is the way it seems to oversimplify psychology. For example, can a single dream be dissected so easily to yield such precise and irrefutable clues? Everything else, too – beginning with the male protagonist’s distress when he sees dark lines on white – falls into place a little too easily. The film, by the way, did have a technical adviser for psychology: May E Romm, MD [am I the only one who sees that name as an anagram of ‘Am memory’?].

Still, all said and done, this is a good, entertaining Hitch film, with all the suspense, the swift pace, the chills, and the cliff-hangers (literally) you’d expect of a Hitchcock. Not in the same league as Rear Window or North by North-West, but it certainly did leave me spellbound.