Therefore, to celebrate a landmark birthday: ten of my favourite Dilip Kumar songs, from films that I’ve seen. To make life a little easier for myself, I’ve restricted myself to just the solos (or, in some cases, solos with a chorus) that were picturised on Dilip Kumar.

1. Madhuban mein Radhika naache re (Kohinoor, 1960): The songs in this list aren’t in any particular order—except for this one. Madhuban mein Radhika naache re is my absolute favourite Dilip Kumar song (it also happens to be one of my favourite Mohammad Rafi songs). Kumkum’s dancing is superb, the music is fabulous—and Dilip Kumar provides a fine example of what an actor lip-synching to a song can do.
Not only is he a very believable ‘singer’, he also plays the sitar—he apparently insisted on taking some weeks to learn how to play it, so that it would look authentic onscreen. Now that’s what I call dedication. 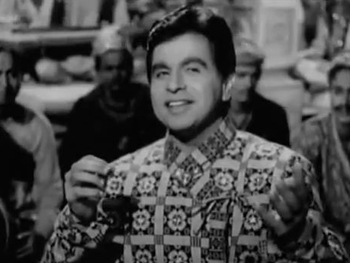 2. Aaj ki raat mere dil ki salaami le le (Ram aur Shyam, 1967): From the superhit film that was to spawn Seeta aur Geeta and other films about identical twins who are separated as infants, and accidentally change places as adults—a superhit song. I had a tough time choosing this one, because I also like Aayi hain bahaarein, mite zulm-o-sitam, a cheery song if ever there was one. But this melodious and sad paean to an about-to-be-lost love is just that notch higher, because of its focus on varying emotions. 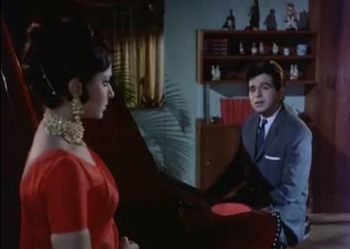 3. O door ke musaafir humko bhi saath le le (Udan Khatola, 1955): Another song of a soon-to-be-lost beloved, but so much sadder than Aaj ki raat mere dil ke salaami le le. Because here, it’s not as if the sweetheart is on the brink of marrying another; it is far more hopeless—because she is being sacrificed, literally being sent to her death. The lyrics—“Chaaron taraf lage hain barbaadiyon ke mele re”—are touching, but the desperate pleading in Dilip Kumar’s face says it all, really. 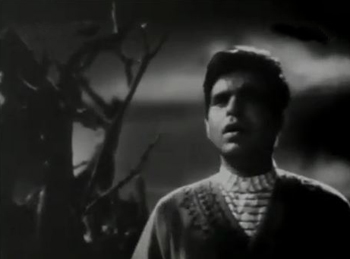 4. Nain lad jayee hain toh mannwa maan (Ganga Jamuna, 1961): For a change, a cheerful, flirtatiously rural song—and Dilip Kumar shows he can shake a leg with the best of them. He prances about, matches steps with the ‘village girls’, and outright declares his love for the beautiful girl who’s standing by, watching shyly. This one ranks right up there with Yeh desh hai veer jawaanon ka as one of Dilip Kumar’s best folksy songs.

5. Dil mein chhupaake pyaar ka (Aan, 1951): Most of us who love old Hindi films would associate this situation—using a disguise to kidnap a young lady (a princess, no less!) in her own vehicle—with someone like Dev Anand, Shammi Kapoor, or Joy Mukherjee. But Dilip Kumar did it well before them, in this delightful ghoda-gaadi song.
And how very handsome he looks, too: completely irresistible. 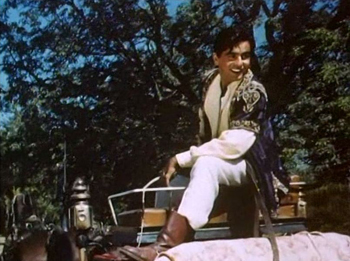 6. Yeh mera deewaanapan hai (Yahudi, 1958): Another romantic song, but an angst-ridden one, which teeters on the edge of despair. Dilip Kumar, as the high-born Roman in love with a Jewish girl, waits for her with rapidly diminishing hope. She will not come, he thinks. And someday, in these ruins, he too will suffocate and die of despair. Then, no matter how much she calls, he will not come. An emotional and touching song, and beautifully sung by Mukesh.

7. Toote hue khwaabon ne (Madhumati, 1958): I was caught between two Dilip Kumar songs from Madhumati: Suhaana safar aur yeh mausam haseen, and this one. While Suhaana safar is a very pleasant song (and that echo effect is wonderful!), Toote hue khwaabon ne wins simply because of its depth of feeling: the sense of utter loss that is echoed in Dilip Kumar’s face—without being hammy or quivery-lipped. A good example of restraint.

8. Aaj puraani raahon se (Aadmi, 1968): While I’m not particularly fond of either Aadmi or Dilip Kumar’s role in it (his character is a rather unlikeable sort), this song is a favourite of mine. Somewhat bitter, cynical, lonely—and yet, in sight of the light at the end of the tunnel. A man who’s been through the troughs, caused by his own selfishness—and has come out of it a better man.

9. Koi nahin mera is duniya mein (Daag, 1952): Another film with lovely songs (Ae mere dil kahin aur chal, in its varied versions, is another wonderful song). This one, speaking of loneliness and distress, is similar in tone to the three previous songs: bogged down by tragedy, deserted by those he loves, the hero sings to himself. And it’s another example of how Dilip Kumar managed to lip-synch to such unhappy songs without appearing overly melodramatic. 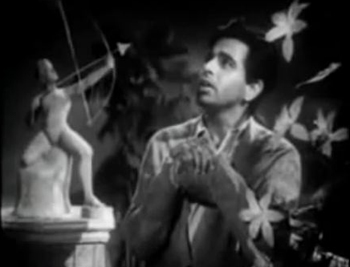 10. Bachpan ke din bhulaa na dena (Deedar, 1951): The joyful children’s version (with Tabassum and Parikshit Sahni) of this song is the better-known one, but the one important reason to like the Dilip Kumar version is that he is in it. It’s a short song, but the expressions that pass over his face as he sings are wonderful: the fleeting glimpse of joy from a long-ago memory; the sudden sorrow of realising that the rosy future he had hoped for has gone; the growing distress.

Happy birthday, Dilip Sahib! May you and your films live long.

106 thoughts on “Ten of my favourite Dilip Kumar songs”