Several readers have told me, over the past couple of years, that I should watch this film. It is, if you go by just the details of cast, crew, and awards won, a promising film. Directed by Yash Chopra, starring Mala Sinha, Rehman, Ashok Kumar, Shashi Kapoor (in his first role as an adult), Nirupa Roy, Indrani Mukherjee, Manmohan Krishna—with guest appearances by Rajendra Kumar and Shashikala. The winner of the President’s Silver Medal for Best Feature Film in Hindi at the National Film Awards.
And with lyrics by Sahir Ludhianvi, set to music by N Dutta. I could well imagine Dharmputra would be a film worth watching. So when I finally managed to lay my hands on it, I didn’t waste much time getting around to seeing it.

Dharmputra begins in 1925, at the house of Dr Amrit Rai (Manmohan Krishna). A distraught Nawab Badruddin (Ashok Kumar), who is Amrit Rai’s now-dead father’s bosom pal (and the man who paid for Amrit Rai’s education, after his father’s death) arrives at the doctor’s home. The reason for his unease is soon revealed: his daughter Husn Bano (Mala Sinha), whom Amrit Rai regards as a sister, is pregnant. No, not a cause for rejoicing, because Bano is also unmarried, as a shocked Amrit Rai is well aware.

Amrit Rai goes out to the curtained car where Bano is sitting, and hears the sad story from her. She had fallen in love with her tutor, Javed (Rehman), but when Javed approached Nawab Sahib to ask for Bano’s hand in marriage, Nawab Sahib threw out this poor and ineligible suitor. Javed had long vanished, who knows where, before Bano told her father that she was pregnant. Now Nawab Sahib has come to Amrit Rai for help. 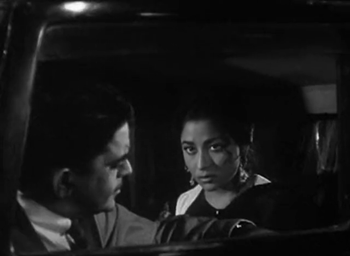 Amrit Rai, in a conversation with his wife Savitri (Nirupa Roy), confesses that he’s in a quandary. As a doctor, he can abort the foetus, but personally, his conscience  won’t allow him to. Also, he realises the stigma attached to an unwed mother: Nawab Sahib’s and Bano’s names will be a hissing and a byword.

After much thinking, Amrit Rai makes a suggestion: he and Savitri will accompany Nawab Sahib and Bano to Simla, where the nawab has a home. They’ll stay in Simla until Bano’s baby is born, and the baby will be registered as the doctor’s and Savitri’s child.
This is duly done, and the baby is handed over to Savitri and Amrit Rai, who adopt the child. He is named Dilip, and nobody’s any the wiser about Dilip’s actual parentage.

Nawab Sahib and Bano now go off on a pilgrimage, and at one of the many shrines they visit, they run into Javed, Bano’s long-lost lover. Nawab Sahib is quick to beg the younger man forgiveness, and to insist that he and Bano get married as soon as possible.
This too, takes place, and the newly married couple move into the house next door to Dr Amrit Rai’s.

Everything seems couldn’t-be-better. Javed and Bano are deeply in love and supremely happy. She has told him who Dilip is, and Javed does not grudge Amrit Rai and Savitri the bringing up of his biological son, whom—as Javed can see—the doctor and his wife dote upon. 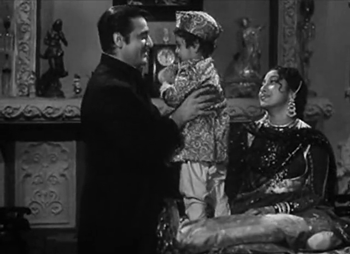 But disaster strikes one day when a now-pregnant Bano, fleeing, giggling, from a flirtatious husband, falls down the stairs and miscarries. And, as is typical in Hindi films of this type [where tragedy and joy follow each other in quick succession], learns that she can now never be a mother. This is, as is to be expected, a shattering blow to Bano and Javed. More so, since [in an ironic twist of fate], Savitri soon after gives birth to twin sons.

Dr Amrit Rai says to Savitri [thankfully not in Javed and Bano’s presence] that God has meted out justice to their neighbours for letting their libidos run away with themselves all those months back. Now they will never know the joy of being parents. A rather judgmental sort of remark, but I can imagine that it would have been fairly typical of the time. [It still would be pretty typical of much of India, I think, even nearly a century later].

In the meantime, Dilip has been, with encouragement from his parents (both adoptive and biological), getting very pally with Javed and Bano. They are so devoted to him that they even get a balcony constructed between the two houses, so that little Dilip can easily scurry back and forth without having to step out into the street. All looks tickety-boo…

…until Nawab Sahib, who has been participating rather vociferously in the freedom movement, one day leads a crowd to pull down and burn a Union Jack. In the violence that follows, Nawab Sahib is killed. 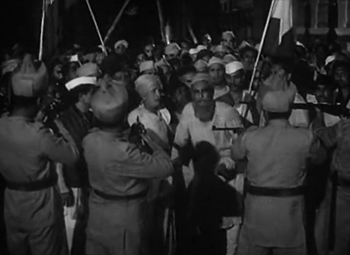 Javed and Bano, grieving and smarting with the blows life has dealt them, decide to leave India for a few years and live abroad. We never learn where they went, but they return 15 years later. It is 1947, and India is on the brink of Independence—and the brink of Partition. The “Inquilab zindabad!” of the 1920s and 30s can still be heard, but the “Hindu-Muslim bhai-bhai!” has given way to “Har har Mahadev!” and “Leke rahenge Pakistan!”

Closer home (and therefore even more disturbing), Dilip (now Shashi Kapoor, in his first adult role) has grown up to be a Hindu bigot of the worst sort. He chastises his younger brothers (one of whom is Deven Verma, in his debut) and their younger sister (Tabassum) for playing table tennis [and thus, in Dilip’s narrow-minded opinion, straying from the cultural heritage of India and Hinduism]. 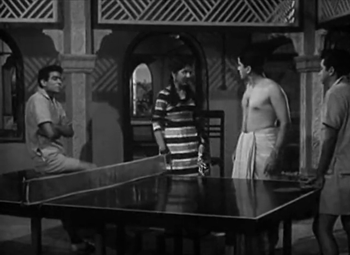 Dilip’s bigoted attitude has even led him to reject, sight unseen, Meena (Indrani Mukherjee), whom his parents have suggested as a prospective bride—all because Meena has lived two years abroad, and therefore must have deserted all her sanskaaras and sanskriti and become totally Westernised. Bano, who has joyfully renewed her friendship with Savitri, goes along to meet Meena, and finds herself enchanted by the girl.

But what of Dilip? Let alone Meena, he is unwilling to accept even the fact that his parents are such good friends with—horrors!—a Muslim couple. It rankles, and all his attempts to brainwash his family into breaking off ties with Javed and Bano fall on deaf ears. But Dilip soldiers on, quickly getting embroiled deeper and deeper in communal politics, while those around him look on, wondering where this will lead…

Dharmputra, when it was released (despite the National Award that it went on to win), was a resounding flop. Perhaps people were not yet ready to face up to a film that talked of forbidden things like communalism or premarital sex that didn’t end with one or both of the partners dead [though Bano’s subsequent infertility is obviously meant as proof of divine retribution].

I, however, think this film far more interesting and well-made than a lot of other of its contemporaries. It tackles a thorny subject, and though it does use some rather in-your-face moralizing at times, the overall effect is memorable. A good film, and definitely worth a watch.

A lot. Dharmputra is an unusual film, not just in its subject matter (the Partition—or even just communalism—was something Hindi cinema tended to sweep under the carpet) but in its treatment of its characters. While it does have its moments of predictability, there are other instances where it stands out from other films of the period. There are more greys here than black-and-white: for example, Nawab Badruddin may have thrown out Javed, but when he finds the man again, actually begs Javed to marry Bano. Not because Bano’s respectability is in danger (that has been averted because of the hush-hush birth and adoption of her son), but because he realizes that Bano’s happiness lies with Javed.

Even when it comes to Dilip (who, I will admit, is quite a bigot): he’s not quite totally black-hearted. For example, there’s his obvious love for the girl he eventually falls for. And there is the fact that when his mother, Savitri, first introduces him to Husn Bano and tells him to touch Bano’s feet, Dilip hesitates (touch the feet of a Muslim?! Horrors!), but eventually complies, without kicking up a fuss.

The other major plus of this film for me was its songs. With lyrics by Sahir Ludhianvi and music composed by the underrated N Dutta, Dharmputra has some very good songs, of which my favourites are Main jab bhi akeli hoti hoon and Yeh kiska lahu hai yeh kaun maraa (both of which are distinguished by not just excellent music but also, respectively, soul-stirring and hard-hitting lyrics). Aaj ki raat nahin shiqve-shikaayat le liye, Saare jahaan se achcha (repeated from Bhai-Bahen) and the qawwali Chaahe yeh maano chaahe woh maano are also good.

Not very much, actually. Yes, I could have done without the melodrama of the climax, but it didn’t irritate me too much. What did puzzle me, though, was how a family that seemed as broad-minded and sane as Amrit Rai’s could have brought up someone like Dilip in their midst—he sticks out like a sore thumb.

But yes (unlike some other reviewers of the film), I don’t think Shashi Kapoor’s character is shown as unrealistically bigoted—I have come across, in real life, people who are just as bigoted, if not more.

I don’t know if I’m barking up the wrong tree, or if Acharya Chatursen Shastri (who wrote the novel, Dharmputra, on which this film was based) actually tried to draw a parallel between Partition-era India and the Mahabharat. The title of the film (‘dharmputra’—the son of ‘dharm’) of course alludes to the overly-‘religious’ Dilip, but is also one of the names for Yudhishthir, the eldest of the Pandavas. Seen that way, perhaps it isn’t a coincidence that Yudhishthir—though adopted by Pandu and brought up as his son—was actually the son of the god Dharm; rather like Dilip himself, born of one father but brought up by another.

And, like Yudhishthir, Dilip too is far from infallible. He does try, within the narrow and very strict boundaries that he has set for himself, to be ‘good’. (That his ‘goodness’ consists of being irrationally prejudiced is a different matter). But, eventually, Dilip falls. Like Yudhishthir, who gambled away wife, kingdom and all, Dilip comes close to throwing away the lives of his own biological parents—and ends up confused, muddled about his own identity.

Plus, there’s the very obvious: the “Hindu-Muslim bhai-bhai” slogans of the 1920s and 30s seem to point to the Kauravas and Pandavas, cousins who went to war, with disastrous consequences. Not just for the winners, but for the losers too. Was Chatursen Shastri indicating that the Partition, like the Mahabharat, led to nobody ‘winning’, but losses on all sides?