To say that I am fond of Sachin Dev Burman is to put it mildly. Along with OP Nayyar, SD Burman was one of the first music directors I heard of—thanks to my father, who is a devoted fan of the music of these two very different composers. It was my father who, when I was still a pre-teen, first drew my attention to the beauty of Thandi hawaayein lehraake aayein, Hum bekhudi mein tumko pukaare chale gaye, O re maajhi, Dekhi zamaane ki yaari, Yeh mahalon yeh takhton yeh taajon ki duniya, and dozens of other songs, each more wonderful than the last.

That love for SD Burman has, instead of abating, increased over the years. With that love has arisen a deep admiration for the sheer versatility and genius of this man, without whom the face (or should that be ‘sound’?) of Hindi film music might have been very different. And much, much the poorer.

Not a surprise, then, that I should get so excited when I discovered that a biography of SD Burman had been published: Sathya Saran’s Sun Mere Bandhu Re: The Musical Journey of SD Burman (Harper Collins Publishers India, P-ISBN: 978-93-5029-849-7, E-ISBN: 978-93-5029-850-3, Rs 499, 258 pages). I had read about and heard various anecdotes about SD Burman over the years: that he was a prince of Tripura, of his love for paan and football, and how he skilfully drew inspiration from just about every type of music: Baul, Bhatiali, Rabindra Sangeet… to actually read a biography of the man himself was something I looked forward to with great anticipation. 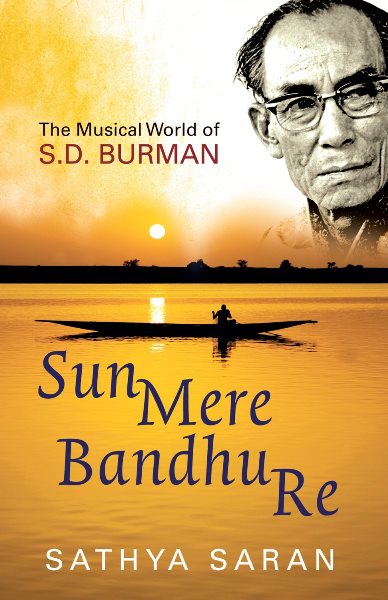 Interestingly enough, I had been told about this book when it was still in the making. Moti Lalwani, who has spent years collecting published articles about SD Burman, interviewing people who had worked with SDB or knew him, and so on—had commented on my list of SDB songs, clarifying some fallacies that were floating around. He had also mentioned this book, which Sathya Saran talks of as having grown mainly out of the vast corpus of research material Moti Lalwani passed on to her.

Has Saran made good use of that material? Yes, and no.

The good part is that the book reveals a lot about the man SD Burman—‘Sachin Karta’—was. A man so devoted to his music that he would spend hours doing riyaaz (incidentally—and this was a gem of trivia I hadn’t known—one of the young boys who used to stand outside SD Burman’s home in Calcutta and listen to his riyaaz was Hemant Mukherjee). A man who believed staunchly in the power of his music; who had an uncanny ability to pick just the right voice to suit a song—even if that voice was an unknown (Manna Dey, whose uncle KC Dey had been SD Burman’s guru in his early days, got his first hit song, Upar gagan vishaal, thanks to SD Burman, whom he was assisting at the time: SDB thought Dey’s voice was perfect for the song).

There are heart-warming anecdotes of a man of immense integrity, a beguiling simplicity and generosity. The man who, though he had hiked his rates by then, offered to compose for Shakti Samanta’s film for much, much less than the director had set aside because he—SD Burman—realised that Samanta was not awash in funds. (The film was Aradhana). A man who was not just highly respected but so loved by his contemporaries that the Anands, Waheeda Rehman and others of the crew of Guide had decided to boycott the Filmfare Awards function when they found that SD Burman had not been given the Best Music Director Award for the film (the award went to the abysmal score of Suraj, a fact that baffles me).

That is where Sun Mere Bandhu Re scores: it shows us SD Burman. Not just his work—which anybody with perseverance and a love for research will probably be able to compile on their own—but the diligence, the love for music, the personality.

Unfortunately, I found things in the book that I didn’t like. There’s the (sadly common) problem about inconsistent and incorrect transliteration here and there, for one. Dard se tera koi na tadpa / Aankh kiski na roi (which should have been Dard se tere koi na tadpa / Aankh kisi ki na roi). There are (equally common) proofing errors. I still don’t know, for example, if the village in Comilla is called Charta or Chatra: it’s mentioned only twice in the book, and with two different spellings.

There is the occasional mystifying sentence: “He had words ready, a chakla, a song, and the metre was set.” Chakla, as far as I know, can mean either of two things in Hindi or Urdu: a base for rolling (used with a rolling pin, a belan), or a brothel. Neither of which seem to fit.

These, however, are minor problems and admittedly few: I tend to nitpick.

What did irk me more was the structure of the book and the style of writing. Sun Mere Bandhu Re is a chronological history of SD Burman’s life, beginning with his childhood in Comilla (in present-day Bangladesh) and up to his death. I had two problems with the chronology. One, dates mentioned, particularly in the first one-third of the book, are few and far between. I would have liked to know when SD Burman came to Calcutta to study law, or when he decided to move to Bombay; but no—these are not mentioned. (The rest of the book, since it focuses on his career in Bombay, is easier to piece together, because the release dates of films are often mentioned).

Several facts, too, are mentioned just in passing, so one is left a little in the dark about things: What was the court case all about? Why, despite being royalty, was SD Burman’s father obliged to work for someone else? What made the father do a volte face—after insisting that Sachin stay on in Comilla, what made him then send Sachin off to Calcutta to study?

Secondly, also while talking about chronology: there are some confusing statements here and there. For example, where Saran talks about the competition SD Burman faced when he first arrived in Bombay, she mentions Madan Mohan, Shankar-Jaikishan, etc. If you don’t know much about the timelines of Hindi film music, this wouldn’t make much difference to you; if you do know, you’ll realise there’s something wrong here. The fact that she later talks about how SD Burman gave Madan Mohan a break by taking him on as an assistant in Do Bhai makes this even more puzzling.

It’s similar with the case of the saxophonist Manohari Singh, who also worked as arranger for SD Burman. Manohari Singh is mentioned in passing—merely as ‘Manohari’, with no indication of who he was, how he helped SDB, etc—several times in the book before he’s actually pointed out as having been an arranger and assistant of sorts to SD Burman. Confusing, again.

One last grouse: the style of writing, and this I must admit is completely subjective. When I read a biography, I want it to be well-written, but in a factual, objective way. I hate to see the writer of the biography trying to get inside the subject’s head and putting words into his/her mouth. This was what irritated me about Robert Hutchison’s Garden of Fools, and this was what also irritated me about Sun Mere Bandhu Re. I don’t want to read what Sathya Saran thinks SD Burman was thinking; if I wanted to read SD Burman’s words, I’d sooner turn to his autobiography.

At the start of Sun Mere Bandhu Re, Sathya Saran explains that the research material from Moti Lalwani was so diverse, she decided it would be best presented as a mosaic—snippets from interviews, letters, articles, even SD Burman’s autobiography (Sargamer Nikhad), strung together with Saran’s own commentary, and places where she presents it in a semi-fictional style, as a first-person narrative from the point of view of SD Burman.

A lot of this (and much of the narrative as such, especially in the first half) is rather flowery prose, not exactly my cup of tea: “The blind singer K.C. Dey singing. Light dances on water with the same ease, a wisp of cloud slips over the moon with similar softness, the clear voice of the bird calling to its mate must have learnt the lilt from the clear notes of this singer. Is no one breathing? Eyes don’t blink, lips smile as if they have never done anything else, calm has cast its spell, a calm edged with ecstasy…”

To me, that is tedious. I will perhaps forgive it in fiction, if the story is remarkable; in a biography I find it plain old tiresome.

I will almost certainly return to this book; it offers a good insight into SD Burman’s life, and even though I’ll probably need to refer to IMDB or elsewhere to try and get an idea of what the timelines are, I suppose I’ll manage. But I just might skip all the purple prose and jump straight to the facts.