What is it about Bengali directors—Bimal Roy, for instance, or Hrishikesh Mukherjee, or (if one steps out of the realm of just Hindi cinema, Satyajit Ray)—that they manage to bring so vividly to life the everyday happenings in the lives of everyday people? Not the escapist fare that most people tend to equate Hindi cinema with, but stories about real people, people one can relate to? Films like Majhli Didi, Parivaar, Parakh, Sujata, Anand: not larger than life, not without a shred of reality. Not art films, not angst-riddled, songless films about the search for the meaning of life, but everyday stories. Songs and all, still very much commercial cinema, but easy to relate to.

Add to that list Dulal Guha, who while he also went on to make films like Mere Humsafar, began his career as a director in Hindi cinema with this charming little film about a sleepy village named Chandangaon, that’s jolted by the arrival of a new doctor…

But before we get around to the doctor, we’re introduced to Ratan (Abhi Bhattacharya), the hot-head of Chandangaon. Ratan lives with his wife Maya (Nirupa Roy, for once childless) and his shrewish mother (no prizes for guessing who: Lalita Pawar). Ratan and Maya love each other in a very believable sort of way: she snaps at him for going off to drink toddy every other day; he snaps right back at her—but when his mother tries to berate Maya for not having conceived in all these years, it is Maya whom Ratan sides with. 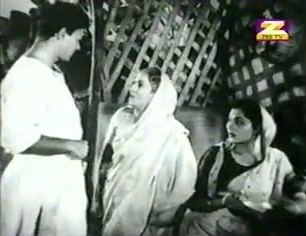 Ratan, armed with a little brass lota to buy himself some toddy, finds a tonga stuck in the mud, and on enquiring, discovers that the nattily dressed, suit-clad passenger (Talat Mahmood) is the new doctor for the government dispensary of Chandangaon. Ratan, lending a hand to haul the tonga out of the mud, hands the lota to the doctor to hold—and, the job accomplished, forgets to take it back.

The scene now shifts to the doctor’s destination: the government dispensary, where—in the absence of the appointed doctor—the compounder, Gokul (IS Johar) has been holding the fort. And practicing homoeopathy, not just on humans, but on the villagers’ animals as well. He is fiercely protective of his homoeopathy and is ready to fly at the throat of anybody who dares to be sceptical. 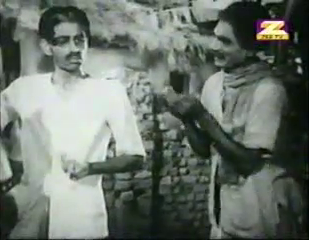 Gokul lives in a little home next to the dispensary, along with his somewhat tomboyish daughter Jaya (Mala Sinha). Jaya, observes the local sarpanch, Dayashankar (Bipin Gupta), when he comes visiting Gokul, is now grown up. Gokul should, he hints, be looking for a groom for her. And who better than Dayashankar’s own son, Shiv (?). Gokul is non-committal, though. He probably knows, as does the rest of the village, that Shiv, besides being hard of hearing and not much to look at, is also somewhat of a simpleton.

Dayashankar tells his sister (Dulari), who keeps house for him, that he’s confident Gokul will agree. All said and done, Dayashankar is, after all, the sarpanch—the President of the Gram Panchayat. Nothing to be sneezed at. But why should he want Jaya for Shiv, his sister wonders. Oh, says Dayashankar: hasn’t she heard the rumours? Everybody says Gokul has savings worth thousands stashed away in the ground of his yard. He’s a wealthy man, really.

Meanwhile, Gokul gives Jaya instructions to clean the upstairs room for the doctor, and to prepare food for him too. The doctor, as has been the custom so far, will be eating with them, and Jaya will be keeping house for him.
While Gokul goes off on an errand, Jaya sets about cleaning the room—and singing to herself of what she thinks the new doctor is going to be like. Like all the previous doctors: old, half-blind, ugly, deaf and limping…

… so, when the doctor arrives and barges into the room, she gets a bit of a start. This is not at all what she had been expecting.

There is confusion; the Doctor (he’s actually referred to, throughout the film, only as Doctor, so we never get to know what his name is) has heard her song, and is amused. Probably because he realizes that he is not the sort of doctor she’s expecting; probably because her bewildered embarrassment in seeing him is deliciously complimentary to him, too. At any rate, Jaya welcomes him in stumbling words, tells him that this is where he’ll be boarding and lodging, and scurries off to get his meal ready.

That evening, just as they’re beginning to eat dinner, there’s a visitor. This is a man from the settlement of fisherfolk. Someone is ill and needs help urgently; will the doctor please come? Gokul tries to stop Doctor; the fisherfolk are outside the pale. They, even if they live on the outskirts of the village, are not part of the village community. He shouldn’t be treating them.

Doctor replies that he’s a doctor; it is his duty to heal, and it doesn’t matter who the patient is. Thank you for the advice, but he’s not going to be heeding it. In any case, not only is he bound by the Hippocratic Oath and his own beliefs, but also by the rules of his employment by the government: the government expects him to treat everybody.

Despite Gokul’s protests, Doctor hurries off to attend to his patient.

Some days later, the ‘President’ (as Gokul calls Dayashankar) confronts Doctor about treating the fisherfolk, and Doctor basically repeats the arguments he’d given Gokul. This irritates the President no end, but after expressing a hope that better sense will prevail, he takes himself off. The only one of the men who doesn’t seem to think there’s anything wrong with Doctor treating the fisherfolk is Ratan. He supports Doctor in this, and in just about everything else as well. Ratan is Doctor’s best friend in Chandangaon.

Meanwhile, as the days go by, Doctor and Jaya fall in love. And go about singing a song by the riverside, where they’re seen by all and sundry… As a result of which, soon the entire village has pretty much realized how things are between these two.

And that, basically, is what the story is all about. Because Dayashankar has his eye on Jaya for his son Shiv. And Ratan’s mother wants Ratan to marry Jaya because Maya has proved barren. And Doctor, after all, is an allopathic doctor, who has no faith in homeopathy and no idea, either, that a careless word against homeopathy can set Gokul’s back up. And Doctor’s inability to follow unreasonable demands to shun the fisherfolk means that Dayashankar will soon have even more reason—beyond the Jaya angle—to resent the young man.

Not a very well-known film, not even the outright comedy some people have called it, but a nice little film nevertheless, that needs to be better-known than it is.

The music, by Salil Choudhary. Though not as stellar a score as some of Salilda’s others, it does have some good songs, particularly the Talat solos Jhoome re neela ambar jhoome and Raat ne kya-kya khwaab dikhaaye.

The characterizations. The plot is simple and uncomplicated, but what really made this film for me was the way the characters are etched. While Ratan’s mother and Dayashankar are the villains of the piece, neither of them is completely bereft of all conscience, so they aren’t the outright villains one sees in the average Hindi film. And two characters—Gokul, and Ratan—are in particular brilliantly multi-faceted.

Gokul, for one, is a crotchety old homeopath, so devoted to his medicine that he won’t hear a word against it. He gets so angry at Doctor for questioning his knowledge of homeopathy that he throws the man out and refuses to let Jaya give him food. And yet, when mealtime comes round, Gokul himself starts fretting—how will Doctor survive if he won’t eat? Where will he eat if Jaya won’t give him food? —that it’s obvious this man’s got his heart in the right place. 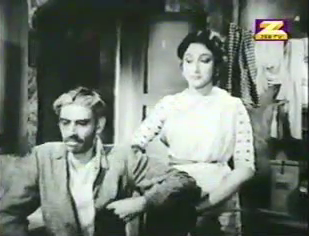 Then there’s Ratan, who—fond of his toddy though he is, and certainly not one of those pillars of rural society—is one those people who, brusque and disrespectful and whatever else he may be, also has his heart in the right place. And is loyal to a fault. Loyal to the doctor whom he makes friends with so quickly, and loyal to the wife, too, who (horrors!) hasn’t given him a child yet.

While on this topic of Ratan and Maya, there’s a poignant little scene which perfectly illustrates their relationship. Maya, harangued and pestered by her mother-in-law (who even goes so far as to name to Maya exactly whom she has in mind for Ratan as a second wife), finally says, in despair, ‘Very well, I will let him marry Jaya.’ She even smiles and nods her assent. When Ratan comes home, his mother comes rushing out excitedly and tells him of this new development. ‘Go and ask Maya for yourself,’ she says—and when a stunned Ratan goes to Maya and asks her, she confirms it.

Ratan only has to look into her face searchingly, and he knows. And she knows that he knows. She has said it only to please his mother, to stop the barrage of insults and haranguing. She does not want him to marry another woman; and he—despite his many arguments with Maya (notably, none of which are about her inability to conceive) —only loves Maya, no-one else. They don’t have to say it; it’s obvious in their expressions, and in the way Maya flings herself around his neck and sobs while he holds her. Good characterization, and good acting. 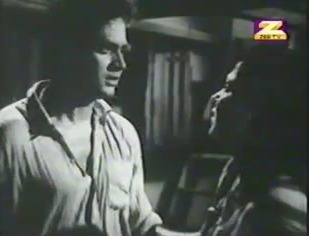 I find it interesting, too, that the two romantic leads of the film—Talat Mahmood as Doctor and Mala Sinha as Jaya—are not really the central characters of the film. They’re there, they’re easy on the eye, they’re the ones who sing the romantic songs, and around whose romance the film revolves, but ultimately, the main characters in the film are Ratan and Gokul. Unusual, in a Hindi film.

The sudden somewhat melodramatic turn the film takes in the last half-hour or so. It isn’t bad enough to qualify for the ‘curse of the second half’ (and it’s redeemed by its resolution having elements of humour in it), but still.