The idea for this post came to my mind when I’d finished writing up my review of Anirudha Bhattacharjee and Balaji Vittal’s Gaata Rahe Mera Dil: 50 Classic Hindi Film Songs. For me, one of the songs that was conspicuous by its absence from this enjoyable book was Tum pukaar lo, from Khamoshi. I love that song so much that I posted a Youtube link for it on Facebook—and found a lot of love for it among other friends and family members. A brief discussion with a friend, and we both agreed that it was one of those iconic songs of waiting. Out of that thread arose this idea: a compilation of good songs that are all about waiting.

Waiting, of course, can be of different types, and for different things. It can be a patient wait, for something one knows is coming one’s way. It can be restless, dominated by an urge to do something to alleviate one’s own suffering. Or the restlessness can be one of hopelessness, of knowing that one waits for something that can never come to be. 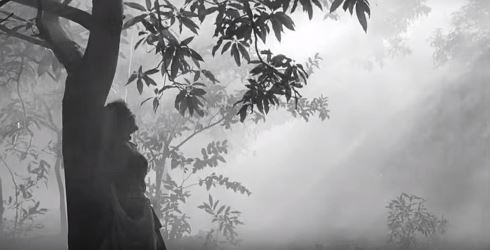 One may wait for a much-longed for event to happen. One can wait for news. For friends, relatives. And, much more frequently in Hindi cinema, where romance is such an important element of most plots, for the beloved.

Ten songs, therefore, that evoke that waiting. I do not impose any restrictions on this for myself, other than the most basic ones (the film in question must be from before the 70s, and it should be a film I’ve seen). It is not necessary that the lyrics should mention words like intezaar or prateeksha (not that I’ve heard the latter in any lyrics, as far as I remember). And the wait could be for anyone, anything.

Here goes, then, in no particular order, though all my absolutely favourite songs of this theme are at the top of the list.

1. Tum pukaar lo (Khamoshi, 1969): What better song to start with, than the one which sparked off the idea for this post? Dharmendra, as Dev, the now-cured mental patient whom his nurse Radha has fallen in love with, looks out of the balcony of his hospital room and sings a song of yearning, of longing for the one he loves. There is nothing about this song I do not love. Waheeda Rehman’s expression, one of utter desolation as she tries to come to terms with the truth. Dharmendra’s slow but restless pacing. The music, soft and melodious and full of yearning. Hemant’s voice. Muktasar si baat hai: tum se pyaar hai, tumhaara intezaar hai. All of it—music, Gulzar’s lyrics, the voice, the picturization—comes together to create a song that’s memorable in its epitomization of intezaar. 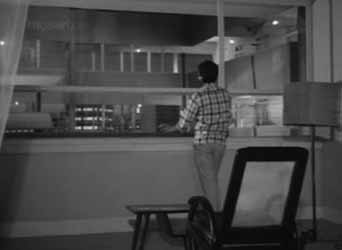 2. Koi door se aawaaz de chale aao (Sahib Bibi aur Ghulam, 1962): When I think of Tum pukaar lo, the female equivalent of the song that immediately comes to mind is this one, because it conjures up the same ache, the same desire. It gives me, as Tum pukaar lo does, the same gooseflesh. The situation here is very different, though, from the one in Khamoshi. Unlike the lover who waits impatiently for the woman he knows he’s going to be marrying soon, this is a neglected wife who waits, with dwindling hope (does she even have any hope now, actually?) for the husband who has never been hers. 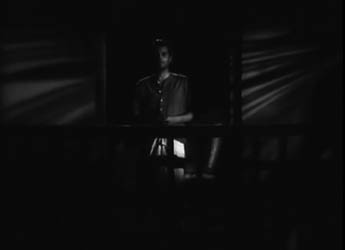 3. Shaam-e-gham ki kasam (Footpath, 1953): Another hauntingly beautiful song about waiting for someone to come. Shaam-e-gham ki kasam is, to my mind, rather like Tum pukaar lo, though (since there is no heartbroken Waheeda Rehman here), that element of pain is missing. But the restrained beauty of the music (Khayyam, in this case), the yearning in the lyrics—Chain kaisa jo pehloo mein tu hi nahin, maar dale na dard-e-judaai kahin—and Talat’s soulful, dulcet voice: all very much in the same tone as Tum pukaar lo. Even the picturization: the evening, the curtains being blown about by the breeze, the man walking slowly along (down the stairs instead of on a balcony, but still: you can sense the restlessness in Dilip Kumar’s body language). 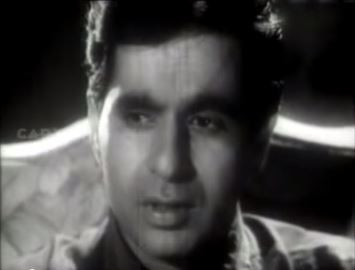 4. Suhaani raat dhal chuki na jaane tum kab aaoge (Dulari, 1949): Dulaari, in classic 40s cinema style, was one song after another. Despite the combination of Shakeel Badayuni as lyricist and Naushad as music director (with Ghulam Mohammad as his assistant—a partnership that created some of the most memorable music in Hindi cinema)—several of Dulaari’s songs are forgettable. This is one of the exceptions.

A young lover, waiting for the girl he has fallen in love with at first sight, begins by pacing around impatiently as he waits for her to arrive. Then, slowly, as time passes, despondency sets in. Is she not coming? Are her promises of fidelity all false? As he strums on his mandolin, he mourns the wasting of this beautiful night, the wasting of the starlight and the perfumed air: without her, none of this is of any use to him. Will she come? When? Lovely lyrics, lovely music—and Rafi at his broodingly beautiful best. 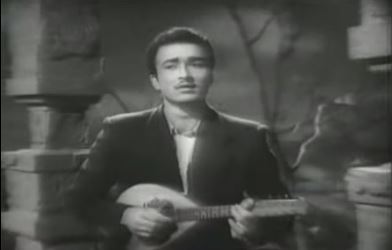 5. Yeh hawa yeh fiza hai udaas jaise mera dil (Gumraah, 1963): And, yet another hero waiting for his beloved. But, with a difference: the love here is illicit. The woman (Mala Sinha) whom Sunil Dutt’s character waits for, was once his sweetheart but is now another man’s wife. There is little restlessness here, but a great deal of pain: the ache of longing and of desire, and also the ache of knowing that this meeting—no matter how romantic—will bring no lasting relief. Because they can never be together. I love the echo effect in this song, as well as Mahendra Kapoor’s rendition of it (have you noticed? All the male songs I’ve listed so far have been sung by different people). And I like the way the picturization shifts, to show both people: the one who is waiting impatiently, as well as the one who finds herself caught in a dilemma. 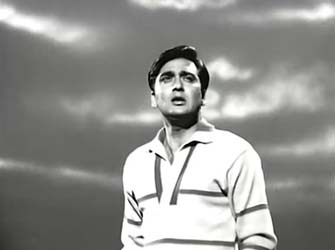 6. Intezaar aur abhi aur abhi (Chaar Dil Chaar Raahein, 1959): And, for a change, a song that is more layered than the ones that have gone before. On its surface—if you don’t know the context—this is another song of an anguished soul (in this case, a woman) waiting for the arrival of a lover. The lyrics (by Sahir) move, as the song progresses, from a relative confidence that the lover will come, to a restlessness at his delay, to—eventually—the sad realization, as morning dawns, that the waiting has come to nothing.

Where this song differs from the others is in the second ‘waiting’ of the song, because the singer actually is waiting—for the dawn, and for the end of her night-long employment as lullaby-singer to the insomniac nawab played by Anwar Hussain. He has commanded her, a singing woman, to sing through the night so that he may be able to sleep; and until morning comes, she must sing on… she must wait for the dawn, or for the nawab’s permission to stop.

Another of those brilliant combinations of great lyrics, music (Anil Biswas) and rendition (Lata). 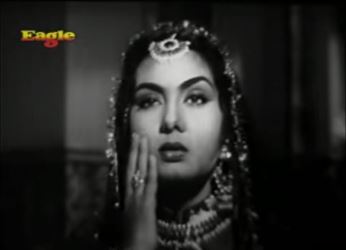 7. Aayega aanewaala (Mahal, 1949): And how could I leave out this song, one of my favourites from the 40s? Aayega aanewaala embodies waiting: not a restless waiting, not a ‘will-he-won’t-he come’ waiting, but a rather more patient waiting, secure in the belief that the person the singer waits for—has waited for all these years—will come. He has to come; whether or not he will come is not within his power. Destiny will bring them together.

Khemchand Prakash’s music and Lata’s voice are hauntingly beautiful in this song (Lata is especially sublime in the aalaap), and the slow sure striking of the clock somehow adds to the atmosphere: the passage of time, the feeling of expectancy. 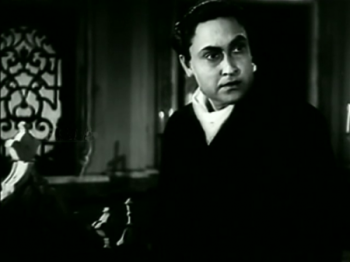 8. Humre gaon koi aayega (Professor, 1962): In a change of mood from all the other songs listed in this post, a peppy, upbeat song about waiting for someone who will be along shortly. Kalpana and Praveen Choudhary, as two orphaned sisters whose tyrannical aunt is their guardian, escape her eagle eye for a while to sing and dance in an impromptu celebration of life, along with a bunch of village friends. And what do they sing about? The love that will come into their lives, for whom they’re waiting: surely he will come, he is just around the bend. Neena (Kalpana), at least, doesn’t know that he is literally just around the corner. I love the folksy tune of this song, and the fact that most of the dancers actually seem to be locals, not imports from Bombay. 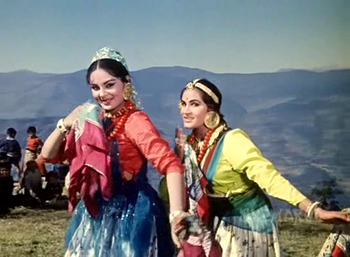 9. Hum intezaar karenge tera qayamat tak (Bahu Begum, 1967): The better-known version of this song is the happy version, which begins in a garden and where the waiting for the beloved ends in the midst of the song itself. This version, later in the film, however, wins for me as a ‘song of waiting’, because there’s something so painfully anguished, so despairing about this waiting. Pradeep Kumar plays a man who thinks (as does just about everybody else) that the woman he loves has married another—but he will still go on loving her, waiting for her to come. Waiting for his death, if that will be an excuse to bring her to his side: Yeh zindagi tere kadmon mein daal jaayenge/Tujhi ko teri aamaanat sambhaal jaayenge/Hamaara aalam-e-rukhsat ho/Aur tu aaye. Sahir at his best, yet again. 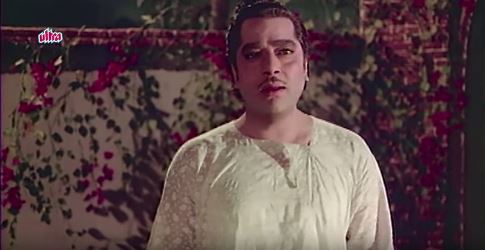 10. Aaja ke intezaar mein jaane ko hai bahaar bhi (Halaku, 1956): And, to end, another song which actually has the word ‘intezaar’ as part of its lyrics. A restless lover (as in Footpath, Dulari, Gumraah, Khamoshi… the list is endless) waits for his beloved to come to him. Ajit, as the beloved of the girl who (later in the film) has the misfortune to attract the covetous eye of none other than Halaku (Hulagu Khan, in history), finds himself waiting for his sweetheart to arrive. Will she come, won’t she? There is that familiar refrain too, of an emotion expressed in other songs of waiting: the romantic atmosphere, the beauty of this time and this place, are fleeting. Will she come before it’s gone, or will he sit here, agonizing and unable to enjoy any of it on his own? 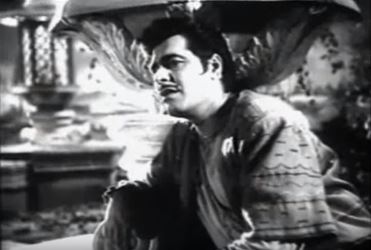 Which other songs would you add to this list?

101 thoughts on “Ten of my favourite songs of waiting”