Not nayan, not naina, not chakshu or any other Hindustani/Hindi/Sanskrit word for eyes, but aankhen.

This post, though the immediate spur for it was Anu’s delightful list of zulfein songs, has been in the pipeline for the past several years, since a fellow writer first asked her friends (of whom I’m one) on Facebook for all the songs we could think of that were about eyes. I came up with so many that it occurred to me then that I could do a post about them. That idea stayed on the backburner for a while, but when Anu’s zulfein songs post appeared, I thought, “I have to do that one on aankhen.”

Because, just as hair are praised, so are eyes. And unlike hair—inanimate, more often than not, and compared perhaps only to the dark velvet of the night, or the spreading black of a storm cloud—eyes have a life of their own. They convey infinitely more than hair ever can, from love to fear to hatred: they cannot disguise the soul, the emotions.

Plus, of course, as is so evident all across Hindi films (and my most recently-watched non-Hindi film, Nanak Naam Jahaaz Hai), eyes are crucial to one’s survival in the world. Blindness can drive people, as it does in countless films, to despair—and it can create situations that form the crux of some very interesting plots.

But, on to the post itself. Besides the usual restrictions that I impose on myself (that the songs I choose must be from pre-70s films I’ve seen), I added two more, just to make this a little more challenging for myself:

(a) The word used must be ‘aankhen’ or its variations, like aankh or aankhon. Other synonyms for eyes will not count.

(b) The word must appear in the very first line of the song.

Here we go, then, in no particular order:

1. Aankhon hi aankhon mein ishaara ho gaya (CID, 1956): The motif of eyes has been used innumerable times in Hindi cinema to convey love: eyes meet, and there is love. Or, as in this case, a pair of angry eyes, brimming with fury at being humiliated and suspected of perfidy, meet a pair of contrite eyes, eyes sorry for having doubted. There is apology and forgiveness, all in the eyes—before the couple bursts into song. Geeta Dutt, singing playback for Shakila, the bulk of Aankhon hi aankhon main ishaara ho gaya; Rafi sings only the chorus. And what a lovely, frothily romantic song they make of it. They tease, they flirt, they show the seriousness of their love, their confidence in their love.

2. Aankhon-aankhon mein hum-tum (Mahal, 1969): Dev Anand again, this time with Asha Parekh. These are two people who have fallen in love under odd circumstances: she has mistaken him for his rich boss (whom she has no intention of marrying), and he, having fooled her once, has come upon her again, only to realize that his initial fascination for her is more than just that. As they walk through the misty woods around Darjeeling, they sing of this love: Hum ajnabi thhe, tum thhe paraaye; ek doosre ke dil mein samaaye (I was a stranger, you belonged to someone else; yet we made our homes in each other’s hearts). And in each other’s eyes.

3. Aankhon mein kya ji (Nau Do Gyaarah, 1957): Before I move on, one more song featuring Dev Anand (and no, even then, I won’t be done). Paired here with real-life wife Kalpana Karthik, he plays a man en route from Delhi to Bombay to claim an inheritance. Midway, our hero realizes that the sharp-tongued young Sikh whom he’d found as a stowaway in his lorry is actually a pretty young woman escaping a greedy bridegroom. And of course, after some initial slanging matches, they fall in love. The song takes a question-and-answer shape: what is in his eyes? she asks. A beautiful cloud, says he. What is in the cloud? Someone’s aanchal, a veil. And what is in the aanchal? A strange disquiet. A romantic song for a romantic night, with not a hint of the turbulence that lies ahead.

4. Teri aankhon ke siva duniya mein (Chirag, 1969): She opens her eyes, and their radiance makes the sun rise for him. She lowers her eyelids, and evening falls. His world is in her eyes, his life and his death are in her eyes. Drawing its main line—Teri aankhon ke siva duniya mein rakha kya hai (What is there in this world except your eyes?)—from a poem by Faiz Ahmed ‘Faiz’, the rest of this song owes its lyrics to Majrooh Sultanpuri. Against a backdrop of Srinagar at its gorgeous best, a lover praises the eyes of his beloved, and she, at the end, praises his eyes. Not because the eyes themselves are beautiful, but because the love in them buoys up the beloved, promises steadfastness and faith.

There is a sad version of Teri aankhon ke siva duniya mein rakha kya hai, too, when the heroine, blinded in an accident, sings of what her husband’s eyes mean to her. It’s too melancholy a song for my liking, while this one is just right.

5. Jeevan se bhari teri aankhen (Safar, 1970): As Sunil Dutt’s character to Asha Parekh in Chirag, so Rajesh Khanna to Sharmila Tagore in Safar: a man telling the woman he loves what her eyes mean to him. Not beauty, not intoxication, but life itself. A medical student who has pretty much given up medicine to focus on his art (and to head slowly towards an inevitable death from cancer), he sings of how her eyes—and, by extension, she—compel him to live. He sings to his own paintings and sketches of her (including one that is a collage of various representations of her eyes), little aware that she is right now coming up the stairs to his room. Wonderful lyrics, beautiful music, and superbly sung.

6. Humne dekhi hai un aankhon ki mehekti khushboo (Khamoshi, 1969): Like Dev Anand, Rajesh Khanna seems to have acted in several films that had either him or another character singing about eyes. Here, it’s not him who’s singing, but the song is his character’s. A stolen song, stolen by the woman (Snehlata) who jilted him and drove him insane as a result. Gulzar’s lyrics puzzled me when I was a child: Humne dekhi hai un aankhon ki mehekti khushboo? (I have seen the fragrance of those eyes? Huh?) And, haath se chhooke ise rishton ka ilzaam na do? (Do not touch this with your hands, and accuse it of being a relationship?) How can eyes be fragrant, how can you see that fragrance, how can you touch it?

It took me a long time to make sense of it. It’s not literal, but metaphorical. Love is too complex, too layered and fragile a concept to be reduced to a mere name. How can you put a name to love, how can you label the relationship between two people? Ek khamoshi hai, sunti hai, kaha karti hai (It is a silence, it listens, it speaks).

Or, you can interpret it the other way: that love is no more than feeling, something completely physical. Touch, vision, hearing. Sensual. Love is of the senses. However you choose to understand it, this is a fabulous song. 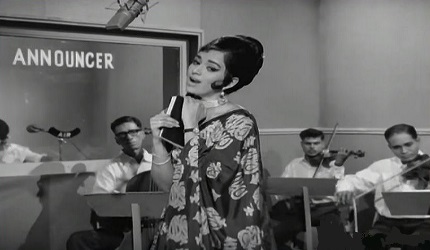 7. Likha hai teri aankhon mein kiska afsaana (Teen Deviyaan, 1965): Dev Anand yet again—he seems to have lip-synced to a lot of songs about eyes (and I haven’t even included Yeh aankhen uff yoo ma). Here, he’s a man who is not quite sure of his heart. Does he love the chic socialite whose parties are the talk of the town? Does he love, instead, the actress who is torn between her love for her work and all it brings to her, and her desire to break free, to be herself? Or is his true love this one, the girl next door? As they return from a picnic, munching on corncobs as they go, they wonder: is this love? Is it not?

Likha hai teri aankhon mein is one of those songs I’d put on my list of the best picturized songs in Hindi cinema: it conveys a carefree joie de vivre brilliantly. The corncobs, the way Nanda’s hair bounces about, the gay abandon with which she wraps Dev Anand in her dupatta—even the way the pony’s tail flicks, in time to the music, near the end: all perfect.

8. Aankh khulte hi tum chhup gaye ho kahaan (Munimji, 1955): For a change, a song that isn’t about praising the eyes of the beloved. Instead, our distressed heroine sings about her own eyes. Eyes that, when she had closed them, had seen the beloved (he was in a boat, and she, desperate to meet him, had rushed into the water; he has rescued her and left her on the shore). Now, opening her eyes, she finds that he is not there. She can sense his presence all around: his warmth, the ‘fragrance of his breath’. His touch still remains on the branches. But she cannot see him. Her eyes search in vain, longing for him.

9. Do pal jo teri aankhon se peene ko mile (Bahaaron ke Sapne, 1967): Again, a Rajesh Khanna film. And again, a song about eyes. Eyes so intoxicating that one who is fortunate enough to ‘sip’, even if only momentarily, from them—to partake of the love those eyes offer—will have lived a hundred years in those moments. Laxmi Chhaya and Bela Bose are the two dancers, leaping energetically about the centre of a grand hall where an engagement party is being held. Like any party worth its salt in Hindi cinema, there has to be entertainment, and what better than two dancers who sing a song of romance, even if it’s not targeted at any specific person? Near the end of the song, though, at the behest of the host, the girls turn their attention on the gatecrasher, the poor outcast who has been pushed into coming to this party—and the song becomes a song of humiliation, of letting him know that he is not welcome, even if the words say just the opposite.

I love the pep and beat of this song, the varying of pace, the way it dips and rises.

10. Aansoo samajhke kyon mujhe aankh se tumne gira diya (Chhaaya, 1961): Itna na mujhse tu pyaar badhaa tends to dominate many people’s recollections of the score of Chhaaya—which is sad, because Aansoo samajhke kyon mujhe aankh se tumne gira diya deserves more appreciation. Rather in the style of Jaane woh kaise log thhe jinke pyaar ko or Ya dil ki suno duniyawaalon, this is a poet singing in a gathering. But Sunil Dutt’s poet addresses not the world, but one very specific person: the girl he loves. Why, he asks, has she turned away from him? Why, like a tear from an eye, has he been shed? The reprimand is gentle; it is more sorrow than fury or scorn, but it has its effect.

Which songs would you pick? I know there are plenty out there, because my longlist was very long, and even shortlisting the songs took a lot of thought. So, bring ’em on.

91 thoughts on “Ten of my favourite Aankhen songs”