If there’s one film maker whose films tend to feature fairly prominently on this blog, it’s Nasir Husain. Of all the films he wrote and/or directed in the 50s and 60s, only two—Paying Guest and Anarkali, both of which he wrote—haven’t been reviewed on Dusted Off (though I have watched both, Paying Guest on several occasions). Rarely is a song list posted that doesn’t have at least one song from a Nasir Husain film. And when it comes to posts like this, where would I be without Nasir Husain?

But, all said and done, and while I may poke fun at the formulas and tropes Mr Husain was so good at dishing up (as delectable concoctions, too), one thing I acknowledge: he knew how to make cinema entertaining. Whether it was pure eye candy you were looking for, or the most fabulous music, or pretty locales and total paisa vasool plots, Nasir Husain was the film maker you could safely turn to. Like Bimal Roy or Hrishikesh Mukherjee, this is one director whose films I’ll happily watch simply because he’s the one directing them.

Which is why this book (ISBN: 978-93-5264-096-6; Harper Collins Publishers India, 2016; Rs 599, 402 pages) caught my imagination from the very beginning. No, not when I bought a copy, but when Akshay Manwani first approached me, saying he was going to write about Nasir Husain’s cinema and if I’d be willing to answer some questions. From that very first discussion till now, I’ve been looking forward to reading this book.

Music Masti Modernity: The Cinema of Nasir Husain is aptly named. This is emphatically (and Akshay makes a special point of mentioning it at the beginning of the book) not about Nasir Husain’s private life, even though—to introduce Husain and to provide the background to his work—Akshay does explain briefly the family Husain grew up in and how he came to Bombay. There is a delightfully romantic little anecdote about how Husain met his wife, Margaret Francina Lewis (who changed her name to Ayesha after she married him), an assistant choreographer at Filmistan with whom S Mukherji used to get Husain to help compose shots before the stars arrived on the sets. There are a few reminiscences from people like Mansoor Khan, Asha Parekh, Aamir Khan, Rishi Kapoor and others, which shed light on what sort of person—fanatically fond of music, with a great sense of humour, always youthful—Nasir Husain was.

Other than that, though, this book is about Nasir Husain’s cinema. Like Jai Arjun Singh in his book on Hrishikesh Mukherjee (which, in some ways, this book reminded me of), Akshay Manwani focuses not so much on individual films, but on the tropes, the broad themes, the motifs that bind his subject’s films together. The romances, the lost-and-found trope, the comic side plot, the gorgeous countryside, the prolonged courtships: everything.

Each of these is examined, with examples, references, and possible sources of inspiration (was Husain, as I have often wondered, inspired by PG Wodehouse? It seems likely, since he liked Wodehouse’s stories so much). Reasons for recurring motifs and themes are suggested—for instance, why does Husain set most of his films outside cities, in the countryside, even though, unlike contemporaries like Bimal Roy, he does not really include the ‘locals’ in the scene? Why do his characters, even when they’re in the country, still remain steadfastly urban?

What struck me the most about this book, even when Akshay was still in the research stage of it, was that he was noticing so many things I hadn’t even paid attention to before. I have been watching Nasir Husain’s films since the early 80s—his were perhaps among the very first films I watched on TV, back in the good old days of Doordarshan. Some films, like Tumsa Nahin Dekha, Dil Deke Dekho, Phir Wohi Dil Laaya Hoon and Teesri Manzil, I have watched so many times on so many formats, that I know every scene, can sing every song, and pretty much know what’s going to happen next.

Despite that, I had never really noticed that some themes (besides the more obvious lost-and-found, the crook-posing-as-heir, etc), are repeated so often. The fact that there are so many journeys, and that the journeys are accompanied by songs that help further the romance. That letters play an important part in the stories. Or that most heroes and heroines have only one parent present. Or that Nasir Husain gave the hero (in Dil Deke Dekho to start with, and later in Teesri Manzil, plus his 70s films) a profession hitherto overlooked in Hindi cinema for leads: that of a Western-style musician, the man with the guitar, the drums, the sax (as opposed to the man with the sitar, already well-loved). 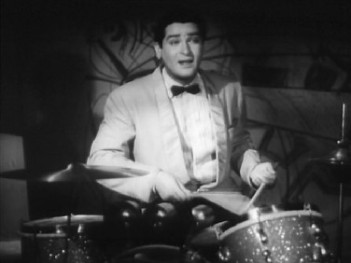 And Akshay doesn’t leave it at that. For each element, for each theme, he goes deep into its history in cinema (on occasion, even non-Indian cinema); why and how Husain may have adopted this element, how he worked and reworked it in different ways, how he constantly modernized a theme to make it relevant to the era (and, considering Husain had a career—if not as a director, at least as a writer—of 45 years, that is saying a lot). For everything from the music in Husain’s films to the language he uses in dialogues; from the camera angles to the lighting, to the names of characters (I hadn’t realized just how frequently Nasir Husain saddled a character with the name ‘Subodh Mukerji’): Akshay covers them all.

There are some little-known anecdotes and behind-the-scenes glimpses from Husain’s films, and there are plenty of photos, including one from an ambitious multi-starrer named Zabardast that Husain shelved after falling out with Dilip Kumar, who was to have starred in it. There’s a comprehensive filmography at the end. There is an analysis, too, of the decline of Nasir Husain: the films, starting with Zamaane ko Dikhaana Hai, which flopped miserably and were instrumental in making Husain perhaps lose faith in himself, too. And there are the films that exemplified ‘clean’ cinema at the fag end of the 80s (a decade whose cinema was marked by crudity and violence): Qayamat se Qayamat Tak and Jo Jeeta Wohi Sikandar.

I had appreciated Akshay’s earlier book, the biography of Sahir Ludhianvi, for the obvious enthusiasm and the equally obvious depth of research that had gone into it. This book, I personally think, raises Akshay’s own standard. It is as enthusiastic, as well-researched, but even better written than the Sahir book. Highly recommended if you have ever watched and liked Husain’s films. Or even if you haven’t—this just might tempt you into giving his cinema a try. And if (like me) you will rewatch, for the umpteenth time, a Nasir Husain film you’ve seen before, you might just see it with a completely fresh perspective and pay attention to details you may never have noticed before.