If you’ve been following this series of posts, you’d know that sometime in May this year, I launched on a spree of watching food movies, in order to do some research for an article I had to write. As I watched movie after movie, it struck me that it would be fun—and challenging (I love challenges)—to cook up a dish or a meal that represented each film, or at least a bunch of connected films, that I watched. Between May and September, I watched sixty-four food movies and cooked thirty-eight dishes or meals corresponding to them. I documented each, and spread out the resultant ramble across four blog posts. This is the last of them. Read on for an insight into the last few food movies I watched, and about the food I cooked to commemorate them.

1. Soul Food (1997): Ostensibly based on Ang Lee’s Eat Drink Man Woman, Soul Food is about an African-American family: three grown-up daughters and how their lives fall apart when their diabetic mother, who’s always held the family together—through a tradition of Sunday dinners, as well as her own good sense and good humour—goes into coma. This film actually had only a fleeting resemblance to Eat Drink Man Woman (the three daughters, one of whom is a too self-confident professional, and the elderly parent who hosts weekly dinners, is about the only thing in common). But it was interesting, and because of this, I finally got around to cooking soul food, which has always struck me as too fatty to be eaten often.

Of course, the reason soul food was consumed was that it wasn’t meant to be eaten regularly—the black slaves among whom it originated could not afford it; besides, for all the hard labour they put in, these calories were much needed. But, since we lead sedentary lives, it’s better to make this an occasional treat. Despite that, I substituted a baked chicken for the fried version. I did, however, retain the mac and cheese the family loves so much in Soul Food, and cooked spinach with bacon to act as the ‘greens’ bit of the meal. 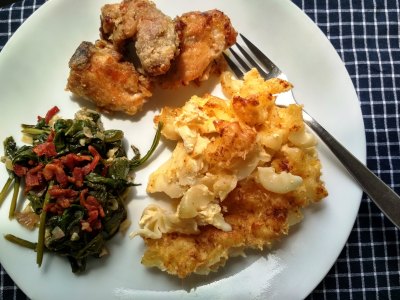 2. Eat Pray Love (2010) and Jamon Jamon (1992): Two films, which couldn’t have been more different, and both of which, in their own way, I didn’t like. In Eat Pray Love, Julia Roberts’s character, a middle-aged woman whose life is shattered by divorce, goes on a trip to Italy (lots of food—in fact, most of the food in the film is here, and it’s good), to India (to the ‘ash-ram’ of a ‘gooroo’ where she learns to meditate and discovers seva, a ‘Hindu’ word for blah blah… painful) and finally Bali, where she learns to move on in life and love.

Jamon Jamon (‘Ham Ham’) is gross, melodramatic, funny at times, audacious, and outright obscene. It’s about a girl who gets pregnant and whose spineless boyfriend can’t summon up the nerve to tell his wealthy mother the truth. Said wealthy mother decides to distract the girlfriend by letting loose the town stud on her—which works, except that town stud falls for her, while having an affair with the boyfriend’s mother. Loads of sex—everybody has the hots for everybody else—and lots of garlic, ham, and some tortillas.

Except for the pizza in Eat Pray Love, I had already made much of what is eaten in the film, so I was in no mood to repeat stuff. So I decided to make a pizza-like Spanish tribute to these two films. Catalan coca, a no-cheese, no-sauce, pizza-like snack which I topped with sautéed onions, bell peppers, and paprika.

3. The Guernsey Literary and Potato Peel Pie Society (2018): The most recent of all the films on my list, this one is about a young writer in 1946 who goes, on an impulse, to the Channel Island of Guernsey to meet the members of a quirky little club that came into being by pure chance during World War II, when the island was occupied by the Germans. There is a succulent roast pig in the story, and the eponymous potato peel pie (which was actually a popular—because practical—Guernsey dish during WWII), but that’s about all there is by way of food in this film, which is really about other things: love, affection, friendship, forgiveness.

Of course, a potato peel pie was the dish of choice for this one. Most recipes I came across included beetroot, not something I like; but this recipe struck a chord with me the first time I read it: sliced potatoes and onions layered with a little grated cheese, topped with the peels tossed in seasoned flour, and that topped with breadcrumbs and butter before being baked. Not quite the ‘no butter, no flour’ recipe Eben makes in the film, but good nevertheless.

4. Half of Heaven (1986): Blog reader and friend Bawa, who’d been diligently following this project of mine on Facebook (I kept posting photos and talking about the food movies I watched and the food I cooked), didn’t just tell me about this Spanish film, she even sent me a link to a subtitled version of it. Half of Heaven is about a young woman, Rosa, who moves from the countryside to Madrid after being widowed, and how she first takes up a job as a wet nurse and then opens a restaurant. It’s quirky, it has some rather low-key (and often black) humour, and it has arroz con leche, the Spanish rice-and-milk dish that Rosa cooks for her first employer every now and then.

So arroz con leche it was. There are various recipes for this, ranging from rich ones with butter and egg yolks, but I chose a simple one: rice cooked in water with cinnamon and lemon peel, then with milk added a little at a time and cooked down till the rice is done. Sugar and powdered cinnamon added. It made me realize why Rosa’s employer was happy to have it pretty much every other day.

Here, by the way, are the links to the movie:

5. Bread and Tulips (2000) and Satyricon (1969): Two Italian films, but they couldn’t be more different from each other. In Bread and Tulips, a middle-aged housewife neglected by her (cheating) husband and grown-up sons, finds herself accidentally left behind at a roadside diner while they’re on a bus tour—and decides to go on vacation herself. Funny, romantic, sweet, and just generally likeable, even though there’s not that much food here (more flowers than food, at any rate).

Federico Fellini’s weird Satyricon (based on the ancient Roman play by Gaius Petronius), on the other hand, is a bizarre, fantastic and often mesmerizing fantasy that involves various episodes in the life of a young student, his boy-lover, and a rival—plus, lots of other characters, including an oracle, a hermaphrodite demi-god, and a wealthy man who hosts lavish parties (which is where the food comes in—and huge, almost repulsive quantities of it, mostly meat).

I wasn’t going to be roasting whole (or stuffed hogs) à la Satyricon, so I chose to bake bread instead. Focaccia, with basil on top. Which sort of fitted, considering focaccia does date back to the time of the Romans—though they wouldn’t have made it with yeast, but probably with grape juice. 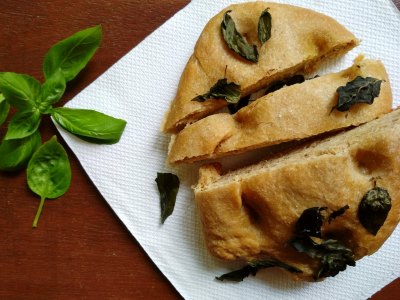 6. Once Again (2018): When I began this project, it was with the aim of watching a set number of films that I’d marked out for myself as fitting the theme—mostly by searching online for recommendations. But, as I proceeded, posting photos on Facebook of the food I cooked, accompanied by notes on the movies I watched, people in my friends network began offering suggestions. Some were obvious suggestions, and movies which I was going to watch anyway. Some were little-known gems, mostly in foreign languages. Some were very new movies I’d not even heard of.

Once Again, a Netflix movie, falls into this last category. It’s about two middle-aged people, both with grown-up offspring, who fall in love. He’s an actor, divorced and lonely; she is a widow, a restaurateur who cooks the food that is delivered to him every day. I loved the ‘mature’ love of a couple past their youth, and the acting of the two leads was amazing.

There was a fair amount of food in this, and masala-smeared fish wrapped in banana leaves and smoked seemed the obvious choice. Then, as the movie proceeded to slow down and drag on and on, I thought something with treacle might convey its essence best. Finally, though, because there’s a scene where the couple together make a salad—oranges and coriander leaves are part of it—I made this: a Thai pomelo salad, with the citrus segments tossed with toasted coconut, peanuts, fried shallots and garlic, and a spicy, tangy, sweet dressing. Lovely.

7. Love and Mary (2007): This little-known film is a rom-com about a young baker named Mary, engaged to a stiff-necked, straitlaced school teacher. When Mary needs to rush home to Texas to her family, she ends up travelling not with her fiancé but with his identical twin, who’s a wild, mad sort, completely different from the man Mary is convinced she loves. Various (predictable) complications ensue.

There is a good bit of food throughout this film, including crayfish, barbecued pork, corn on the cob—and, of course (Mary being a baker) lots of chocolate cake, eclairs, petits fours, etc. I chose to bake something that didn’t appear in Love and Mary, but pretty much represents good American home cooking. An apple cake (the recipe’s out of the American Heart Association Cookbook), which combines apple sauce and chunks of apple with lots of lovely spices, to make a soft, moist, really fruity cake. This is one of my favourite cakes.

8. Spicy Love Soup (1997): This Chinese film looks at love—romantic love—through vignettes in the lives of a bunch of people. An elderly widow who decides she wants a second chance at love. A much-married couple who’ve become more like room-mates than anything else. A school boy infatuated by a classmate. A photographer fascinated by a girl he sees across the street. All of the vignettes feature food in some way or the other, whether a grand feast where a nervous young man meets his fiancée’s folks, or a sadly inept lunch prepared by a little boy in a desperate attempt to keep his divorcing parents together…

Given the title, a spicy Chinese soup seemed the appropriate dish to make here. And for that I chose a very simple favourite: a Chinese hot and sour soup, with mushrooms and tofu cooked quickly in a broth, flavoured with lots of vinegar and soya sauce, and finished off with egg swirled into the hot liquid to form threads. 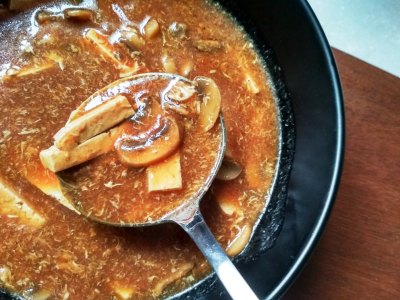 And that, too, finished off my project.As you can see, I cooked a lot of dishes. A few were old favourites; some, as you can see, were new to me. Some were triumphs (a few very unexpected triumphs!) and some were disasters. But I enjoyed myself, and my family too, mostly liked what they were served up.

19 thoughts on “The Food and Food Movie Project, Part 4”