A former reader of my blog—who left in the wake of much rancour—had, as a parting shot, told me that she had got a good laugh out of seeing the completely idiotic themes I thought up for song lists. I know she won’t be reading this, but I thought of her when compiling this list.

Not that I think this theme is idiotic (or that any of the other themes I gave chosen so far are, for that matter), but that it’s an unusual theme. The point is, I see a situation or hear a word or a phrase in a song, and I realize that this is not the only song I’ve seen this in or heard this in. It rings a bell, and I remember all those other songs that have been (for example) picturized in a similar setting.

For example, a recording studio. Considering there are accomplished singers in just about every Hindi film (barring the very occasional songless film like Kanoon or Ittefaq), it’s not utterly surprising to find at least some of those people not merely singing at parties or while dancing in gardens: some of them are accomplished enough to be able to sing professionally. In recording studios, on radio, for albums, and so on. 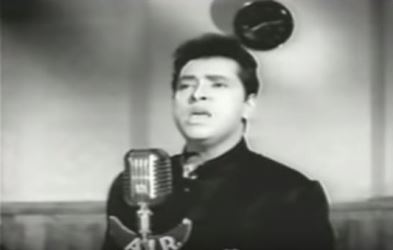 Ten songs, therefore, in which the ‘singer’ (the actor or actress lip-syncing to the song) is shown singing in a recording studio. As is usual with my lists, this one consists of songs from pre-70s films (with one exception, on the cusp) that I’ve seen. In no particular order:

1. Humne dekhi hai un aankhon ki mehekti khushboo (Khamoshi, 1969): Khamoshi had just a handful of songs, each one a gem. This one, the only song from the film that was sung by a woman, has the most puzzling yet poetic lyrics. When I was a child, I wondered what they meant. How could one possibly see the fragrance of eyes? But if you set that minor quibble aside, the poetry is beautiful. Do not assign a relationship to love; merely feel it, let it touch your spirit.

Lovely lyrics (Gulzar’s), composed (in the film) by the poet played by Rajesh Khanna, who has lost his mental balance after being jilted by his girlfriend Sulekha (Snehlata), who has added insult to injury by also stealing this particular composition of his. As she stands in the studio singing it, Radha (Waheeda Rehman), the sad nurse who is trying to restore the poet’s sanity, hears it on the radio. And realizes that this is not just the song that her patient wrote, but also a song—perhaps—that reflects the story of her own doomed love. 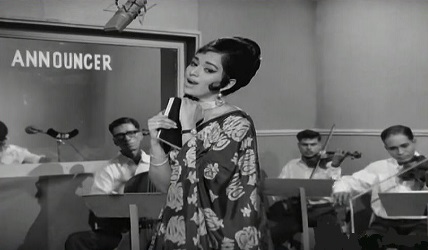 2. Jeevan ke doraahe pe khade (Chhoti Si Mulaqat, 1967): Chhoti SI Mulaqat may have bombed badly enough at the box office to pretty much reduce Uttam Kumar (who, besides starring in it, also produced it) to relative poverty. It supported some pretty regressive ideas and, even for that day and age, was fairly hidebound in its version of what constituted an ‘ideal marriage’ and a ‘good Indian woman’.

But Chhoti Si Mulaqat did have some good songs, and this one—where the beleaguered heroine (Vyjyanthimala) expresses her dilemma—is probably the best of the lot. She is torn between duty and love, between her heart and her mind, between what society demands of her and what she wants for herself. She is not yet self-sacrificing enough to give up her own happiness for what others think is right—but her conscience will not let her rest easy, either. If she chooses her own happiness, it will make others unhappy. Two ways, both with their own pitfalls, their own sorrows and joys. One of Lata’s finest songs.

3. Zindagi bhar nahin bhoolegi woh barsaat ki raat (Barsaat ki Raat, 1960): And, for a change, a song sung by a man. Bharat Bhushan’s character, a poet (and, of course, as all Hindi film shaayars go, also a singer) has encountered the most beautiful girl in the world on a rainy night, when both of them, strangers, have taken shelter in the same blacksmith’s forge. Unaware of who she is, yet unable to forget her, the shaayar puts his anguish and longing into words. When he sings his song on radio, little does he know that the woman he has so precipitately fallen in love with is listening—and growing ever more longing in her sighs, ever deeper in love with him, too.

This song tends to get overshadowed by the qawwalis of Barsaat ki Raat, but it’s still a good song, its lyrics oozing romance, the music lilting, and Rafi’s rendition soulful and lovely. 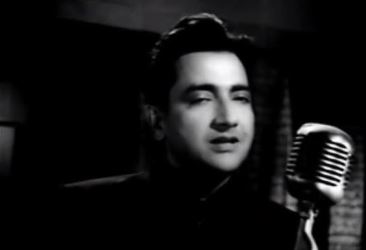 4. Dil todne waale tujhe dil dhoond raha hai (Son of India, 1962): Son of India was a very forgettable film, but it boasted of one of the most popular children’s songs ever in Hindi film history: Nanha-munna raahi hoon desh ka sipaahi hoon. And there was this (also popular) song, which differs from the songs earlier in this list in two respects. Firstly, the singer is not recording the song for radio or an album; it’s recorded for television, which in itself was a rarity in India back then. Secondly, it’s a duet (why the female singer should pause in between verses long enough for a passerby far away to sing alternate verses, is beyond my comprehension—but perhaps that’s because they’re twin souls?) Kumkum plays the sad and wealthy wife of a no-good adventurer (played by Kamaljeet) who has now fallen on hard days. She pines for him; he pines for her and repents of his treachery; and their son roams the country on his own.

5. Koi matwaala aaya mere dwaare (Love in Tokyo, 1966): Continuing in the same vein (when it comes to medium) is the very first song of Love in Tokyo. Asha Parekh’s character, like Kumkum’s in Son of India, is singing for a television show—and, she’s going one step further. She’s not just singing, she’s also dancing, for a Japanese TV channel. Joy Mukherjee’s character, an Indian who goes to Tokyo to fetch his recently orphaned half-Japanese nephew, is wandering around a department store and catches a glimpse of this Indian danseuse singing of a beloved who now rules her heart—and he decides she is the one for him.

6. Khul sim-sim khullam-khulla (Biwi aur Makaan, 1966): I didn’t know about this song till a few years back, which was when I finally got around to watching Biwi aur Makaan. Biswajeet in this film plays a singer, and there couldn’t be a better introduction to his character: the film’s opening credits roll to this song, eventually seguing into the scene at the recording studio, where our hero is singing. A singer, an amiable young man who grins and bounces about as he sings, who has no qualms about lending his voice to a song that’s half nonsense and half so much frivolity that it’s close to nonsense anyway. Khul sim-sim khulla-khulla, raani ka kho gaya gulla pretty much sets the tone for the film: this is not to be taken seriously. It’s loads of fun all the way, but don’t expect anything approaching seriousness.

7. Hum thhe jinke sahaare (Safar, 1970): From the outright frivolous and frothy to the deeply emotional, even despairing. The two lead characters—ex-classmates, in love with each other but unable to be together—realize that they have no future. The man (played by Rajesh Khanna) because he literally has no future: he is dying. The woman (Sharmila Tagore) because she has to bow to the pleas of the man she loves: he will not let her tie herself to him because that will make her a widow. They love each other, but it cannot be. And so, along with that love, there is rancour, too, more than a hint of resentment.

… all sentiments that are expressed brilliantly in the song of a singer who’s recording a song where the heroine’s elder brother (IS Johar) works.

8. Ik thha bachpan (Aashirwaad, 1968): Another song that is emotional and poignant—and which sings of a love that is not romantic. Sumita Sanyal’s character stands in a recording studio singing a song of her own childhood: of a childhood that centred round the loving relationship between herself and her doting father. A childhood, too, whose happiness came to an abrupt end. Little does this emotional singer realize that her song, overheard by her father (who is a convict in a jail), affects him deeply and reminds him, too, of the one he loved the most.

9. Apni ada par main hoon fida (Teen Batti Chaar Raasta, 1953): From one of the few V Shantaram films from the 50s that didn’t star him (but, as was expected from the film maker, did star his wife). In Teen Batti Chaar Raasta, Sandhya played a dark-skinned (read: ugly) girl who has a lovely voice that manages to make her somewhat of a star on the radio. Enough, at any rate, for several men (including the man whose house she eventually ends up working in, as a maid) to imagine her to be as lovely of face as her voice is beautiful. Apni ada par main hoon fida is a good song, music-wise, but what makes it even more interesting are the nuanced lyrics. So what if no-one else believes her beautiful, so what if nobody will notice her loveliness? She is convinced of it, she is proud of it. A fine reflection of the character’s refreshing sense of self-esteem.

10. Aankhon aankhon mein ho gaye mast ishaare (Khazanchi, 1958): An example of a song that helps initiate a romance out of what had been no more than a fleeting, unacknowledged attraction. The hero (Rajendra Kumar) and the heroine (Shyama) have, after some initial friction, met again, this time thanks to his having saved her father’s life. Just as they’re getting to know each other, this song—coincidentally sung (in the story) by the hero’s sister—airs on the radio. It echoes their feelings so completely that it ends up amplifying those feelings even more. A convenient song! 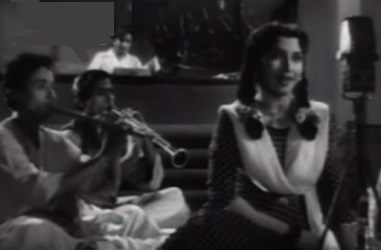 Which other songs can you remember that fit this theme?

102 thoughts on “Ten of my favourite ‘recording studio’ songs”