The story begins with two friends, Kamla and Parvati, chatting. One of them is the wife of the Kunwar (Prithviraj Kapoor); the other is the wife of the headmaster, Ram Das (Nasir Hussain) whom Kunwar Sahib has appointed to the school he owns. Ram Das’s wife expresses her gratitude—all they have is thanks to Kunwar Sahib—but her friend brushes her off. In fact, she nurtures a desire that there be an even greater bond between the two. [No prizes for guessing what’s coming].

Yes, Ram Das’s little daughter, who comes in, almost on cue, will be one day Kunwar Sahib’s bahu. Her future mother-in-law takes off a distinctive necklace [I knew this was coming] from around her own neck and puts it on the little girl. 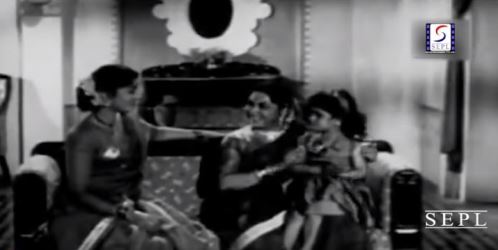 Sadly, this bliss is, right now, in the process of being shattered. In the school where Ram Das is the headmaster, an argument breaks out between two boys. Of them, the one who started it all is Kunwar Sahib’s own son, Rajesh. Ram Das slaps Rajesh, and Rajesh, sobbing, runs out of school and home to Daddy, where he complains about Masterji’s beating him.

A belligerent Kunwar Sahib goes rushing off to the school and is all for chastising Ram Das right there, in class. Ram Das and he eventually have a heated discussion in which Ram Das tries to explain his behaviour and how Rajesh was at fault, but Kunwar Sahib isn’t listening. He flaunts his wealth before Ram Das, says Ram Das is his servant, and how dare he he behave like this, blah blah…

The long and the short of it is that Ram Das, deeply hurt, resigns and goes away with his wife and daughter to the village.

And then we switch to years later. As is customary in films of this type, we are introduced to the hero Rajesh (now Shammi Kapoor) as he goes about in a car with a bunch of friends, singing (and with Rajesh dancing rather precariously).

Soon, Rajesh has a run-in with Savita (B Saroja Devi), a college mate. Savita is berating Rajesh’s male friends, and Rajesh takes their side—even tearing up Savita’s book in the process—without first finding out the facts [the people in this film tend to go overboard when it comes to meting out punishments].

As it happens, Rajesh is firmly in the wrong here. It turns out that Savita and her sahelis had been harassed by Rajesh’s pals. Savita gives the men an earful: their parents’ hopes rest on them, who knows how much their parents have sacrificed to ensure their sons go to college, and this is the way they’re spending their time in college?

Even as she’s lecturing fiercely, Savita loses all her audience, all except Rajesh, who waits till the end. When Savita’s finally had her say and gone, Rajesh apologizes to thin air. Hah.

Anyway, what with this and that, Rajesh and Savita soon become friends. She is extremely studious, and takes it upon herself to help Rajesh—who’s been too busy dancing on cars to pay much attention to studies—prepare for the exams. Over the course of their lessons, they fall in love too.

When the results are declared, it’s Rajesh who’s come first, and has won a gold medal. Savita is very happy for him—this is a win for her, she assures him—but Rajesh insists on putting the medal around her neck. He also insists on taking her home to meet his mum, and to point out the medal around Savita’s neck.

This, naturally, draws mum’s attention to Savita’s neck and the necklace already around it. [There we go. Full circle]. There is instant recognition; Mum—who was already inclined to approve of her son’s choice—is over the moon to discover that this is the very same girl whom she had earmarked for bahu all those years ago.

Sadly, Kunwar Sahib’s reaction is not quite that of his wife. While he, when introduced to Savita, is the very picture of politeness and geniality, when he’s gone into the other room to talk to Rajesh, he puts his foot down. He will not have Rajesh marrying the daughter of Ram Das, who was their servant. Never.

Since Savita is in the next room and Kunwar Sahib makes no attempt to keep his voice low, she overhears it all. She tries, later, to dissuade Rajesh: he shouldn’t go against his father’s wishes, etc… but Rajesh is confident he can win Daddy’s approval.

Daddy, sadly, is a hard nut to crack. Rajesh tries, Rajesh’s mother tries. Savita’s father, much against his wishes and bowing to pressure from his wife, puts aside his pride and goes to Kunwar Sahib, but even that comes to nothing. Kunwar Sahib will not budge.

Rajesh, however, is not one to take things lying down. So what if Daddy doesn’t listen. He marries Savita anyway, takes Kunwar Sahib’s ire on the chin, and sets up home…

…with the help of Jeevan (Pran), who is the son of Asha Ram (Om Prakash), an old servitor of the family’s. Jeevan, unknown to Rajesh, has long had an eye on Savita, but since he now pretends to have given up on Savita and is all courtesy, she too doesn’t caution Rajesh. Jeevan owns a hotel, and though Rajesh tries to get a room there, Jeevan says there are no vacancies. Instead, Rajesh and Savita can stay at the flat of a friend of Jeevan’s, who is currently abroad.

What neither Rajesh nor Savita realize is that Jeevan has another reason to throw a spanner in the works of their marriage. Jeevan labours under the delusion that Rajesh has made Jeevan’s sister Sarla (Shubha Khote, for once not paired with Mehmood) the plaything of an idle hour, as Wodehouse would put it. The events and misunderstandings leading up to this assumption are convoluted enough to require a separate post, so I’ll just leave it at the fact that Sarla’s beloved is actually Banke (Agha), who is Rajesh’s servant.

Or ex-servant, now that Rajesh has left home and all the luxuries associated with home. He and Savita, now on their own, are having to fend for themselves and are having a tough time. So tough that when Diwali comes around and Savita’s parents write to her, inviting Savita and Rajesh home for the festival, Rajesh makes Savita decline. How can he go to his in-laws’ home with nothing? Because they can afford nothing, not even the smallest of gifts… 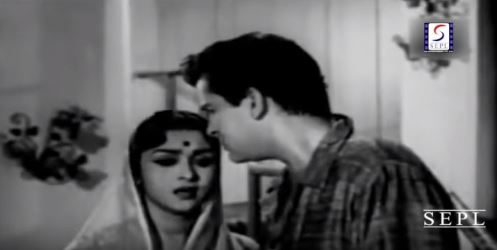 This predicament, if they only knew it, heralds the start of the end (or what is the end until the inevitable—for Hindi cinema—happy ending). Because Jeevan, in cahoots with his girlfriend (whom he’s actually just using and doesn’t love at all), the cabaret dancer Neeta (Helen, who else), is getting ready to bung more spanners into the works.

Shammi Kapoor, purely in terms of looks. And a couple of the songs: Bahaaron ki kahaani sunaati hai jawaani, and Jaan-e-bahaar husn tera bemisaal hai. Zindagi kya hai gham ka dariya hai isn’t bad, though it’s a little too angstily screechy for me. Ravi wasn’t at the top of his game here, though Shakeel is adequate—Zindagi kya hai has good lyrics.

So much. Sadly, so very much.

First of all, the story itself, which is too predictable and too melodramatic. There are the obvious tropes, and the obvious ways they play out. The comic side plot, despite the presence of some stalwarts of the genre, becomes pretty tedious pretty quickly. And the characterizations are badly done (and, sadly, so common in Hindi cinema of the 50s and 60s, now that I come to think of it). The worst examples of this are Rajesh and Savita themselves. These are two people so deeply in love that they would rather face ostracization and bankruptcy than be separated from each other—but they’re both so quick to believe the worst of each other, too: they’re suspicious, they don’t talk things over, they never ask for explanations, they assume the worst.

And, Shammi Kapoor is horribly miscast here. What this melodramatic mess of a film needed was a Rajendra Kumar or Raj Kumar: Shammi’s joie de vivre is in place and appropriate only for his first few scenes, after which his character sinks into a morass of angst and sacrifice, followed by suspicion, self-pity and more, which means you basically see Shammi writhing and making pained faces through a good bit of the film.

All said and done, not my cup of tea.