Over the years this blog has been in existence, several people have asked me to compile a list of songs that are beautiful to listen to, but which are terribly picturized—songs which I don’t like to watch, only listen to. Every time I’ve started to compile a list, I’ve given up quickly, because I’ve found myself listing almost all of Bharat Bhushan’s songs.

Bharat Bhushan, while he lip-synced to some truly memorable songs, has never been one of my favourite actors. But one thing is undeniable: this man was at one time hugely successful, working opposite some of Hindi cinema’s leading ladies—from Madhubala to Meena Kumari, Nimmi to Mala Sinha—and commanding among the highest fees of his time. Bharat Bhushan, in his heyday, was not to be scoffed at (it’s a different—and very sad—story that he went from rags to riches, being reduced to acting as an extra, and being spotted by Amitabh Bachchan waiting in line at a bus stop).

Today, to commemorate Bharat Bhushan’s birth centenary (he was born on June 14, 1920, in Meerut), I decided I would celebrate with a list of ten of my favourite Bharat Bhushan songs. As always, these are all from pre-70s films that I’ve seen, and are in no particular order.

1. Ketaki gulab juhi champak ban phoole (Basant Bahar, 1956): When I was initially thinking of the songs I’d include in this post, I briefly toyed with the idea of making it a solos-only list. But a closer look at my favourite Bharat Bhushan songs revealed the fact that some of his best songs are the ones which are duets. This one, for example, from one of the many films in which Bharat Bhushan acted as a poet/musician. In this stunning display of classical vocals, his character (with Manna Dey singing playback) goes into a battle of voices with a character for whom none other than Pandit Bhimsen Joshi sings playback. Ketaki gulab is a song that gives me gooseflesh, I find it so good—and this from someone who knows nothing of classical Hindustani music.

2. Main teri nazar ka suroor hoon (Jahanara, 1964): Jahanara was yet another film where Bharat Bhushan acted as a poet—as Mirza Changezi, a shaayar who makes the mistake of falling in love with a Mughal princess, the eponymous Jahanara, daughter of Shahjahan. A mistake, because Jahanara, as a princess, was not allowed to marry. This tale of a doomed love was as tragic as most of the period films Bharat Bhushan acted in, and it had some lovely songs. Of the ones Bharat Bhushan lip-syncs to, my favourites are Phir wohi shaam wohi gham and this one. This one a wee bit more, its poignancy made even more touching by the emotion in Talat’s voice and the pain in Rajinder Krishan’s lyrics—plus, of course, Madan Mohan’s beautiful music. The epitome of a sad love song.

3. Dil-e-naadaan tujhe hua kya hai (Mirza Ghalib, 1954): Yet another film in which Bharat Bhushan played a poet—but in this, unlike in Jahanara, the man he played was none other than the poet who is arguably Urdu literature’s most popular shaayar. Mirza Asadullah Begh ‘Ghalib’, who was for some time ustad to Bahadur Shah ‘Zafar’ himself, and who composed a huge corpus of work in both Persian as well as Urdu. Of course, the film, being after all a Hindi film, took liberties galore with the events and life of Ghalib, including creating a lady love for him, played by Suraiya.

Mirza Ghalib had some superb songs, several of them beautiful renditions of Ghalib’s ghazals by Suraiya. This ghazal, addressed to the singer’s heart, which refuses to stop thinking of and loving the beloved, is one of my favourite songs from the film. 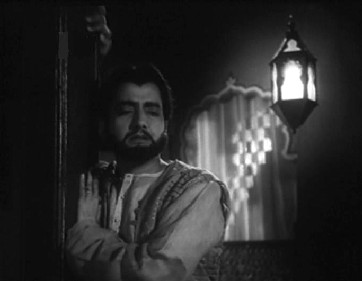 4. Yeh ishq ishq hai (Barsaat ki Raat, 1960): If Bharat Bhushan hadn’t had a Baiju Bawra, a Mirza Ghalib, Shabaab, Basant Bahaar or a Sangeet Samrat Tansen in his filmography, he would still have ranked for me as one of the actors to have lip-synced to my favourite songs: because he was the one who lip-synced to what is, in my opinion, the very best qawwali ever in Hindi cinema. Barsaat ki Raat was one great song after another (and many people, I think, would have likely chosen the title song for this list), but for me there is no equalling Yeh ishq ishq hai. Bharat Bhushan’s character, a poet (what else!) is sitting in the audience and looking on as family friends—played by Shyama and Ratna (who later went on to marry Bharat Bhushan)—compete in a qawwali face-off with a very reputed qawwal. The women’s team does very well in the beginning but then falters, and finally unable to see them lose, our shaayar steps up.

Not only does he spout some great poetry (and sung beautifully too, by the inimitable Mohammad Rafi), he also succeeds in energizing them again. And, more importantly for his own love life, he is able to spur his lady love into showing a bit of spirit and leaving her home to come to him.

5. Mann tadpat hari darshan ko aaj (Baiju Bawra, 1952): Bharat Bhushan had made his debut in Kidar Nath Sharma’s Chitralekha in 1941, but it took another decade for him to hit the jackpot with Baiju Bawra, the tale of the legendary musician/singer of medieval India. In this film, with music by Naushad and lyrics by Shakeel Badayuni, Bharat Bhushan got to lip-sync to such gems as Tu Ganga ki mauj, Jhoole mein pawan ki aayi bahaar, and O duniya ke rakhwaale. Of all the songs of Baiju Bawra, my favourite sung by Bharat Bhushan’s Baiju is this song, which could be construed both as a hymn as well as a paean to a much-loved and highly respected guru.  The very controlled start of Mann tadpat hari darshan ko aaj, building up into a crescendo as it nears the end: a virtuoso performance by Rafi, and combined with the music and the lyrics through it all—unforgettable.

6. Chandan ka palna resham ki dori (Shabaab, 1954): An insomniac princess’s lack of sleep is not merely driving her to ill-health, it’s also driving everybody around her—the king, her ladies-in-waiting, everybody—batty. Nothing works, not the best physicians, not the lullabies sung by dozens of acclaimed singers from far and wide. Until a singer (Bharat Bhushan, of course) arrives and sings a gentle lullaby: of a cradle made of sandalwood, of the cool breezes rocking a beauty to sleep… and sure enough, his voice is so soothing and his words so evocative, the sleepless princess does indeed fall asleep.

Hemant is not a voice I generally associate with singing playback for Bharat Bhushan, but his voice really suits Bharat Bhushan in Chandan ka palna: mellifluous, gentle, quiet.

7. Do ghadi woh jo paas aa baithe (Gateway of India, 1957): Bharat Bhushan was so stereotyped as the poet/musician that even in the (relatively infrequent) film which had a modern setting—as opposed to period films like most of his most well-known ones—he ended up playing a poet anyway. As in Gateway of India. In this very unusual heroine-centric film, Madhubala was the undoubted focus of the story, a heroine on a night-long adventure which brought her in contact with a series of men, each seemingly more unscrupulous than the last. Bharat Bhushan, as the only one who is a ‘good man’, is the one with whom she sings this romantic song: not really yet an expression of love, since they’ve only just met, but rather an exchange of a love for poetry.

8. Tum bin jaaoon kahaan (Pyaar ka Mausam, 1969): Bharat Bhushan acted in some of Hindi cinema’s biggest musical hits, from Baiju Bawra to Barsaat ki Raat: but in the span of just one decade, he went from being a hero to being relegated to the sidelines. By the last couple of years of the 60s, though he did act in the lead role in films like Taqdeer (from which the song Jab jab bahaar aayi aur phool muskuraaye proved a big hit), he was also reduced to taking on the part of Shashi Kapoor’s character’s father in Pyaar ka Mausam. A father, yes, but also one who sings beautifully. Tum bin jaaoon kahaan appears in various avatars throughout Pyaar ka Mausam, but the first time it’s featured—playback by Kishore Kumar—is when it’s lip-synced by Bharat Bhushan, a man singing a love song to the wife he loves so much.

9. Jhannan-jhannan baaje paayaliya (Rani Rupmati, 1957): One of those rare period films in which Bharat Bhushan didn’t play a poet or musician—but Baaz Bahadur was (at least according to this film) more acclaimed for his love for music than for any prowess as a general and/or ruler. In fact, his love for Rani Rupmati is also seemingly founded on their mutual love for music—possibly even the only reason for them to be kindred souls. While Aa lautke aaja mere meet is probably the first song from this film that comes to mind when one talks of songs Bharat Bhushan lip-synced to, I love Jhannan-jhannan just a wee bit more (perhaps because it’s not been done to death the way Aa lautke has been?) A fine bit of singing, and lovely music too.

10. O ashaadh ke pehle baadal (Kavi Kalidas, 1959): Given Bharat Bhushan’s track record as the portrayer of various musicians, singers and poets from history, it’s appropriate that I should end this list with yet another of those films in which he played one of these characters. Here, he plays the famous Sanskrit poet, Kalidas. Lyricist Bharat Vyas excelled in creating songs inspired by Kalidas’s own works, and in O ashaadh ke pehle baadal, he uses Kalidas’s famous lyric poem, Meghdootam as the basis of this song. Kalidas (Bharat Bhushan) sings some of the verses as the narrator, telling the ‘cloud messenger’, the ‘meghdoot’, what sights he will see on the way to Alkapuri, where the narrator’s wife lives. Along the way, at Kurukshetra, Mt Kailash, and more, there are dancers who sing verses, but the action shifts again and again to Kalidas.

A long song, and changing track (and even tune) now and then. Manna Dey is superb as the voice of Bharat Bhushan—and the song itself is an interesting snapshot of Meghdootam.

And, because I love this song, a bonus one.

Jhoomti chali hawa yaad aa gaya koi (Sangeet Samrat Tansen, 1962): I haven’t watched Sangeet Samrat Tansen (there seem to be conflicting opinions in the realm of cine-blogging and microblogging about this film: some assert that it was never even released commercially). If this period piece—another film featuring Bharat Bhushan as yet another musician, this time the famous Tansen, one of the nau ratna of Akbar’s court—went unreleased, I fail to understand why. With music so good, in an era when good music often made big hits of films that were otherwise unexceptional, Sangeet Samrat Tansen could have probably done well.

Anyhow, my favourite song from this film. Sung by Mukesh, lip-synced by Bharat Bhushan, and a beautiful one.

40 thoughts on “Ten of my favourite Bharat Bhushan songs”