Over the years this blog has been in existence, several people have asked me to compile a list of songs that are beautiful to listen to, but which are terribly picturized—songs which I don’t like to watch, only listen to. Every time I’ve started to compile a list, I’ve given up quickly, because I’ve found myself listing almost all of Bharat Bhushan’s songs.

Bharat Bhushan, while he lip-synced to some truly memorable songs, has never been one of my favourite actors. But one thing is undeniable: this man was at one time hugely successful, working opposite some of Hindi cinema’s leading ladies—from Madhubala to Meena Kumari, Nimmi to Mala Sinha—and commanding among the highest fees of his time. Bharat Bhushan, in his heyday, was not to be scoffed at (it’s a different—and very sad—story that he went from rags to riches, being reduced to acting as an extra, and being spotted by Amitabh Bachchan waiting in line at a bus stop). 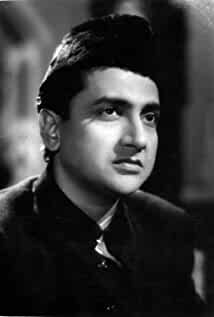 END_OF_DOCUMENT_TOKEN_TO_BE_REPLACED

There’s this delightful, irreverent new literary journal called AntiSerious. Which, as its name suggests, is all about not being serious. Not being serious about politics, society and its morals, the economy, literature, or whatever. When AntiSerious were starting up, they asked me if I’d like to contribute an article. They left the choice of subject matter to me, and I (gleefully, with a whoop of joy you could’ve heard in Chinchpokli) picked old Hindi cinema. (Yes, well. What did you expect?)

What emerged was this, a brief (really, compared to the usual length of my posts) essay on what it is I like about old Hindi cinema. What makes the 50s and 60s the cinematic equivalent of comfort food for me.

… or, because AntiSerious has shown a tendency to inexplicably vanish, here is the entire article:

Some years back, a smart, snazzy music-and-DVD store opened in a mall I used to frequent. I couldn’t resist the temptation to go check out the DVDs on display.

I’m quietly flipping through the titles when a bright-eyed and earnest staffer appears.

I heave a sigh. And here I was hoping I’d be left alone in what I know will be almost certain disappointment. But perhaps not? This is a big store. There are lots of DVDs. Hope springs eternal. ‘Prem Patra?’ I venture. ‘1962. Or Boyfriend? 1961, Shammi Kapoor.’

There’s a moment of bewilderment, of deer in the headlights, of what the eff did you just say. The smile comes back on in a jiffy, but it’s wavering at the edges now. ‘I’ll look, ma’am.’ Then, just as he’s turning to go, ‘Anything else, ma’am?’

I could say Mother India or Guide, which they’ll probably have, but I’ve seen both, and like neither. ‘Jab Pyaar Kisise Hota Hai,’ I say.

He comes back five minutes later, just as I’ve come to the conclusion that he cannot have found any of the films I wanted. But—hallelujah!—he actually does have one DVD in his hand. Jab Pyaar Kisise Hota Hai, sure enough. Not the 1961 Dev Anand-Asha Parekh film I’d wanted, but some frightful Salman Khan one from the 1990s. I shudder and run away.

Yup. I’m that eccentric who doesn’t think the 1980s are ‘classic’ (they couldn’t be, even a century from now). I’m the one who dwells in the past, who’s totally fascinated by old cinema. And when I say ‘old’, I mean anything that ends at about 1970. ‘Why this fascination with that period?’ ask friends.

Till now, my usual response has been to rave about the music, to wax eloquent about the subtlety and sensitivity of Bimal Roy films; about Madhubala’s gorgeousness and Shammi Kapoor’s handsomeness. I shut up when people get that glazed look over the eyes.

Time to come up with a more comprehensive answer. Why, after all, this fascination?

The conclusion: several factors. There is the eye candy. The fabulous music. Lots of brilliantly scripted films, from crime thrillers like Teesri Manzil and CID to dramas like Pyaasa and Parakh.

But what really makes the films of the 50s and 60s so very endearing to me, is that they’re the cinematic equivalent of comfort food. They give me a warm and fuzzy feeling, and invariably leave me thinking – even if it’s a film I’m watching for the first time – that this is an old friend, familiar and likeable and with no nasty surprises lying in wait.

Perhaps I should illustrate that with some examples.

Let’s say you’re watching an old Hindi film. Chances are you’ll sooner or later come across a baby (usually the heir to a throne, a zamindari or at least an eye-poppingly immense fortune). If someone, within the first half-hour of the film, gives the child a tattoo, has him/her photographed, teaches him/her a unique song, or gives him/her a distinctive piece of jewellery (a taaveez, preferably), you can bet the child will be lost, to be brought up by passing strangers who disappear with the kid for the next 15 or 20 years (never 14, never 19: always a round figure).

You also can assume that the child:

(a) will grow up unaware of his or her heritage;
(b) in the course of his/her perambulations through life, will meet, again and again, people who (unknown to this person or them) are actually a long-lost parent or sibling or (if the child, before being lost, was old enough to have a childhood sweetheart) said sweetheart.
(c) will have instant chemistry with the people in question; and the chemistry will be appropriate to the actual relationship. A long-lost brother and sister, meeting each other as strangers will feel only fraternal, not romantic. If, on the other hand, they’re unrelated and were once childhood sweethearts (or promised to each other by interfering parents), then the chemistry will be romantic.

Similarly, a long-lost parent will evoke deep affection and respect, and make the long-lost offspring imagine that Ma or Pitaji would have been just like this. Ditto for the old lady or gentleman (who will be white-haired and doddering, even when probably not more than 50): they will always feel a maternal or paternal fondness for the young stranger.

Talking about long-lost mothers, you can be sure that if Nirupa Roy plays a filmi mum, she’ll misplace a child sometime, somehow. In the odd film here or there, she might deliberately do a switcheroo with her baby – but for its welfare. More usual, though, a storm, train wreck, fair (not necessarily the Kumbh; even a busy village fair will suffice) or black-hearted goons will be responsible. Many years later, she – now keeping body and soul together by stitching clothes – will be reunited with her offspring. (Note: if Leela Chitnis plays mum, she’ll have also contracted some fell disease in the meantime).

Lost-and-found isn’t essential for some smart predictions to be possible, though. For instance, if someone close to the hero or heroine – sibling, best friend, romantic interest, or the protagonist himself/herself – is an upholder of the law (preferably a lawyer, but a cop will do), you know what’s coming: murder, with the hero or heroine being accused.

It’s the same with medicine. If an important character is a doctor, you can be pretty sure someone is going to get mighty sick. Always, also, the disease they’ll contract – or the accidental injury they’ll receive – will be in keeping with the doc’s specialisation. An ophthalmologist will have someone dear go blind, rather than suffer a stroke or have a heart attack.

Then there’s the delicious comfort of film romance. Barring the one-off film where an unmarried heroine gets pregnant (and – a minor digression – invariably after just one spell of indiscretion, on a rainy night) – you can be sure everything will be very chaste. These are films you could take your kiddies to watch without wondering if there’ll be embarrassing snogging. There’s nothing remotely embarrassing (though possibly misleading, for the young) about two dahlias bobbing together.

And, if you want to perpetuate the illusion that romantic love’s for keeps, Hindi cinema manages brilliantly. If two people fall in love, that love weathers all storms: villains (both the Pran/Prem Chopra type, and the disapproving patriarch); accidents; war; misunderstandings; forced marriages to other people – but the lovers will come together eventually. If the odds are stacked too high against them in this life, they’ll be united in the next, with pastel-tinted mist swirling about as they float dreamily off, singing their song in echoing voices.

Not that every film has all of this. There are aberrations, films without piano songs at parties. Or films like the songless Kanoon or Ittefaq. Or Dhool ka Phool, in which two lovers are audacious enough to fall in love with other people after having a child out of wedlock. Or Haqeeqat, where just about everybody dies (it is a war film, but when has that ever stopped Hindi cinema?). Or – no, wait. I’ve run out of examples.

I admit it: I like things to follow set patterns. I like to be able to guess what’s going to happen, and am very smug about being proved right. I love the comfort of stories playing out the way they should in a perfect, innocent, sweet world where right always triumphs, no matter in how implausible or improbable a way.

In other words, I love the world of old Hindi cinema.