When I’d decided to dedicate this month to regional Indian cinema, I’d also decided that I wouldn’t restrict myself to only the grim, stark ‘real’ films that win awards (Chemmeen, as you will see over the next few films, was an exception rather than the norm). After all, it’s not only the films which win awards that are remembered and loved. There are also films that may not be award-winning material, but are enjoyable and prove to be hugely popular.

Pathala Bhairavi—originally in Telugu, also dubbed in Hindi and Tamil—was one of these.  Although the research I’ve done doesn’t seem to indicate any awards won, this film was a superhit, which ran to packed houses for weeks on end. It was also the only South Indian film to be selected for screening at the first International Film Festival in Bombay in 1952. And—this was what made me want to see it—it was a fantasy film, one of my favourite genres. 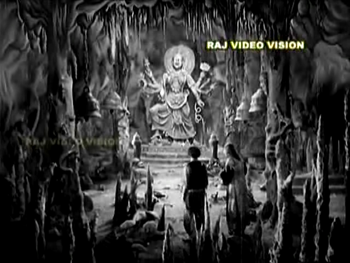