Sunil Dutt and Waheeda Rehman. The two names themselves conjure up a mix of everything from Pyaasa to Mother India, from Gumraah to Kaagaz ke Phool. Sunil Dutt, whom I tend to associate either with suspense films (Humraaz, Mera Saaya) or angst-ridden (or otherwise philosophical, socially relevant films like Railway Platform or Sujata. Okay, he did do Postbox No 999 and Padosan, but still… Waheeda, whose films with Guru Dutt did showcase her prowess as an actress, but which also tended to paint her as a ‘serious’ actress—although in her case, films like Solvaa Saal and 12 O’Clock showed that she could be as convincing in peppy and light-hearted roles as many of her contemporaries.

If that’s your impression of Dutt and Rehman—two actors who appeared in mostly grim films—this rom-com is worth seeing just for a different, fun, side to both of them. 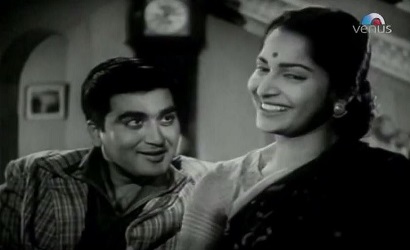