Alfred Hitchcock is, for me, the cinematic equivalent of writers like PG Wodehouse or Georgette Heyer or Agatha Christie: I see their names on a work, and I know that this is something I can read (or watch, in Hitchcock’s case) and almost certainly not end up finding it a waste of time. The other day, trawling Youtube for something to watch, I came across Under Capricorn. I had heard of this one before, but besides being aware that it had been directed by Hitchcock, I knew nothing of the film. A good opportunity to watch a Hitch film I hadn’t seen.

This story begins in an unusual location (for Hollywood, that is): below the Tropic of Capricorn, in Australia. Set in 1831, Under Capricorn begins one day in Sydney, where the new Governor (Cecil Parker) of New South Wales, having just arrived on the continent from Ireland, is addressing the people. His welcome, while all gleaming brass and starched uniforms on the official side, is lukewarm when it comes to the general public. They aren’t especially impressed.

END_OF_DOCUMENT_TOKEN_TO_BE_REPLACED

Yes, Charles Dickens was born exactly 200 years ago today – on February 7, 1812, in Portsea. In his lifetime, he wrote a number of short stories and non-fictional works, besides about a dozen major novels. He was recognised as one of Britain’s greatest writers within his lifetime – and cinema took to his stories like a duck to water. Have a look at his filmography, and you’ll see what I mean. Dozens of adaptations, feature films, short films and TV series, have been made of Dickens’s work.

So, as a tribute to Charles Dickens, here’s one of them: a story of love and hate set against the backdrop of the French Revolution. A Tale of Two Cities. 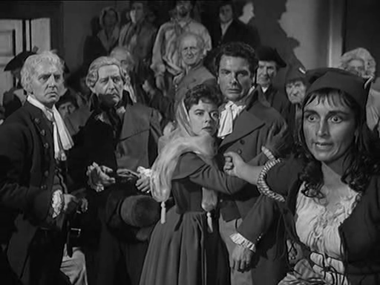 END_OF_DOCUMENT_TOKEN_TO_BE_REPLACED

It’s been a long time since I reviewed a film by one of my favourite directors, so I decided this one merited a rewatch. Like The 39 Steps and Young and Innocent, The Lady Vanishes is one of Alfred Hitchcock’s early British suspense films. I saw it first when I was about 12 years old; but in the years since, I’ve never forgotten the story – I still remember almost every twist and turn of this film. And I still think that it’s one of the best train journey films ever made.