The other day, someone mentioned that after Omkara, Maqbool and Haider—based respectively on Othello, MacBeth and Hamlet—Vishal Bhardwaj was going to be making a trio of films based on Shakespeare’s comedies. The thought came into my head: had any Hindi film maker remade a Shakespearean comedy before? The very next moment, the answer popped up. Of course: Angoor. And (my brain was beginning to work overtime by now), another film based on A Comedy of Errors and also starring Sanjeev Kumar: Gustakhi Maaf.

I hadn’t heard of Gustakhi Maaf until a few years back, when I happened to find (and subsequently buy) a delightful lobby card featuring Sanjeev Kumar in this film. I went looking for the film, discovered that it was based on A Comedy of Errors and that it starred the ever-bubbly Tanuja—but I couldn’t get hold of the film anywhere. Until Harini (over at bagsbooksandmore) pointed me to it. So here goes: review #1 of 2015, of a fun, frothy film. 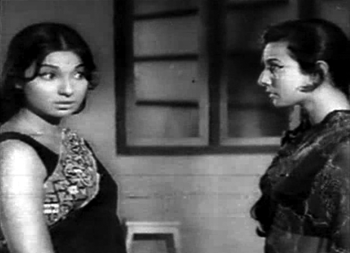 END_OF_DOCUMENT_TOKEN_TO_BE_REPLACED

I’ve had a very enjoyable weekend. I watched two films, The Green Hornet and Anne of the Indies (the former better than reviews made it out to be). I dined at one of Delhi’s best French restaurants. And I bought birthday gifts for myself. Before you start thinking I’m woefully unloved, let me clarify: my relatives often gift me money. On Diwali, Karva Chauth, Christmas, my birthday, etc—I am often given an envelope and told to ‘buy something for yourself’. Since I’m not much of a shopper for clothes and jewellery, and since I already have a huge collection of unwatched DVDs and unread books, this seemed the best alternative. Old lobby cards and film stills. I visited two shops in Delhi, and spent all that money on a handful of lovely old Bollywood photos.

It’ll take me a while to write the review of Anne of the Indies; in the meantime, here’s something for you to feast your eyes upon: scans of the stuff I bought.

First, this one. This is the only one that’s just a still, not a lobby card—so it doesn’t have the name of the film on it. I have no idea which film this is, and though I think the actress is Shashikala, my husband (who, by his own admission, doesn’t know much about old Hindi cinema), doesn’t agree. Any other ideas? If anybody knows which film this is from, I’d welcome that too.