My post on how similar classic Hollywood actually is to classic Bollywood omitted a popular cliché: amnesia. So, if Greer Garson’s character could fall in love with a soldier who’d lost his memory in Random Harvest, Sadhana can do so too, in Ek Musafir Ek Haseena.
Two years after they both debuted in the generally-enjoyable Love in Simla, Joy Mukherji and Sadhana acted together again in this film. It has lots to recommend it: a very beautiful lead actress (I personally think Sadhana looks her best in this film), a superb musical score by O P Nayyar, Raj Khosla’s direction—then why, at the end of two and a half hours, do I feel a sense of dissatisfaction?

The story starts off promisingly enough, in November 1947. In Kashmir, the insurgent Kabaalis are raising hell and the Indian army is trying to drive them back. Lieutenant Ajay Mehra (Joy Mukherji) has been deputed to infiltrate Kabaali territory in the area near Baramullah to gather intelligence. Ajay’s two guides, Seedha Ram (Dhumal) and Ulta Ram (Rajendranath) take him into the area; Ajay changes into civvies and heads into Kabaali zone. 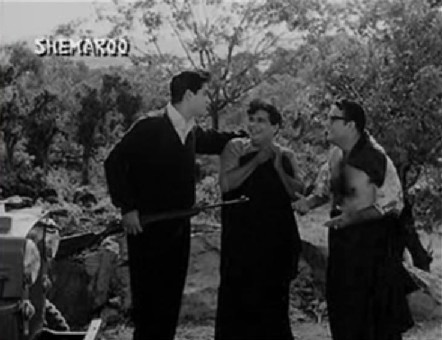 Simultaneously, in Uri, the orphaned Asha (Sadhana) is being married off. Her bridegroom (Kamal Kapoor) and his father (? From the vast gaps between his teeth, he looks like Rai Mohan, but I don’t think it’s him) are a bad lot. They’ve paid Asha’s chachaji (Chaman Puri) Rs 15,000, but this has in no way endeared Asha to her groom, whom she hates. 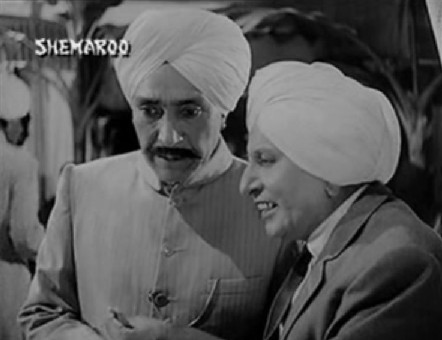 Just as the wedding is getting under way, the Kabaalis attack, and everybody runs helter-skelter. Asha’s to-be husband and daddy-in-law show their true colours: they drag her into a room and make her hand them all their jewellery (for safekeeping, they say). The father runs off, and when Asha begs her groom to take her with him, he refuses too. He disappears, leaving Asha to her own devices— 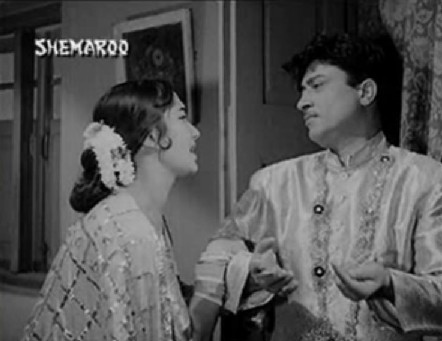 —and she ends up being attacked on a hillside by a troop of marauding Kabaalis.
Fortunately for Asha, Ajay Mehra is there too, and he comes to her rescue. In the crossfire and the bombardment, the Kabaalis are killed, but Ajay is hit on the head and gets knocked out. Asha drags him into the straw-filled cellar of a deserted house and looks after him, bandaging his head, keeping watch over him, and hiding his inert body when some wandering Kabaalis enter the house.
When Ajay comes to his senses, however, he can’t remember who he is or what he’s doing here. He gets a bit frantic, and tries to bully Asha into telling him who he is.

Asha, out on a foraging trip, makes friends with a boy called Abdullah (Master Aziz), who along with his dog Sheru (Tommy the dog) comes along to help with Ajay. The four of them set off for Srinagar, where Asha hopes a doctor will be able to treat Ajay. On the way, Ajay falls in love with Asha and tells her so, in several very nice songs. Asha is obviously very attracted to him too—but there’s that obnoxious husband lurking in her memory, so she tries to ward Ajay off and tell him there’s no future for them.

In fact, when they reach Srinagar and Ajay is admitted to a hospital, Asha tells the doctor (Nazir Kashmiri! For once, not Ramu Kaka) that she’s a married woman, so will not be coming back to meet Ajay—she must go back to her husband. 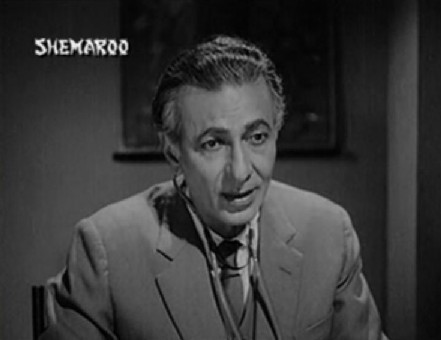 Now some fairly time-consuming and pointless to-and-froing happens in the Ajay-Asha-nasty groom triangle. Asha, by turn pativrata sati Savitri and gutsy filmi heroine, begins by going home and mooning about as she looks out over the Jhelum river when Ajay (who’s run away from the hospital) sings mournful songs for her in a passing boat. She even hides behind a curtain, so Ajay won’t see her.

But then her groom and his parents come to decide when Asha will be taken to their home. In passing, Asha’s ‘father-in-law’ even raises doubts about Asha’s chastity—she’s been away God knows where all these days, in the midst of the Kabaalis; how could she be pure? It’s finally decided, though, that they’ll come in a couple of days to fetch her.
Asha now shows a bit of spirit and tells her tauji, her older uncle, what her groom and his father did: grabbing her jewellery and leaving her to fend for herself—and anyway, the wedding rites didn’t end, so how can she be considered married?

The long and the short of it is that when groom and baaraat come to take Asha, Asha’s tauji stands up for her and even summons the priest who had officiated at the wedding, and who now confirms that the wedding wasn’t completed. Asha isn’t married! Her chachaji—the younger uncle—also shows a bit of spine, with the result that the aspiring groom and father-in-law go away, huffing and puffing and plotting vengeance.
Asha, of course, goes happily off to find Ajay so that they can sing another song together.

There’s another brief interlude when the thwarted groom and his father try to kidnap Asha but are once again thwarted—this time by Ajay and some friends of his—and then the story finally gets a move on. Ajay finds a tailor’s label—‘Continental Tailors, Bombay’—on his clothing and figures that he may be able to find some clue to his identity if he goes to Continental Tailors. So, after assuring Asha of his love for her, he arrives in Bombay, only to find that Continental Tailors has shut shop. Instead, there’s now a Continental Hotel in its place. Its manager (Siddhu) tells Ajay curtly that he can’t help him, sorry.

Ajay, wandering on the pavement shortly after, inadvertently finds himself the sole witness to a daring bank robbery. There’s a getaway car; a bunch of robbers who make a quick escape; and the leader of the gang, a masked bandit who gets into the car. He’s chased by Ajay, who also jumps into the car. In the fight inside the car, the masked bandit’s mask gets stripped off, and Ajay sees his face: it’s the manager of Continental Hotel. The villain, however, manages to push Ajay out of the travelling car. 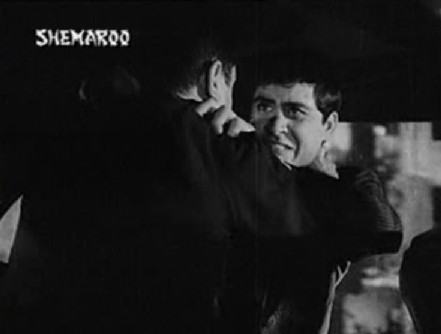 Ajay falls out, is hit by a passing car, and taken to a hospital by passersby. When he finally comes to, he tells the inspector (Jagdish Raj) who’s come to take his testimony that he doesn’t remember a thing about any bank robbery or car chase or anything. In fact, he’s surprised that he’s in a civil hospital: since he’s an army officer, he should be in the Military Hospital. Ajay’s memory is back! 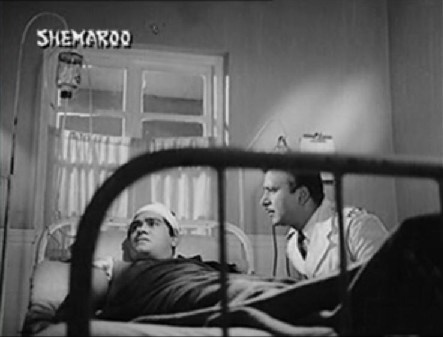 Unfortunately for Ajay, the manager of Continental Hotel doesn’t know this. He thinks Ajay can identify him as the robber, so he decides it’s time to do away with Ajay…
…by introducing a person who will have a bonafide reason to be in the same house as Ajay: Ajay’s wife. The wife, Kamini, of one of the gang members (Jankidas) is sent off to accomplish this task.
[Look closely at Siddhu’s amazing bandgala in this screen cap. Why the question marks along the front and on the breast pocket? Is this man constantly wondering whether Ajay will suddenly remember him as the robber? Since this guy is pretty dangerous too, wouldn’t a skull and crossbones have been more appropriate?] 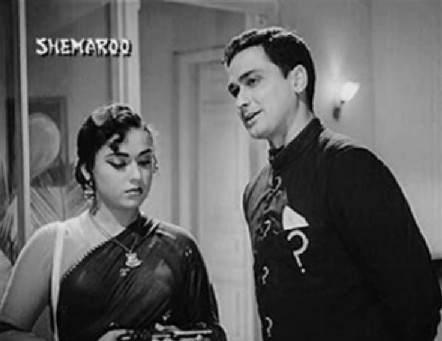 Ajay, though he remembers nothing of the past six months, is sceptical when the woman tells him that she’s his wife.
What’s more, there’s another person who would much rather not have Ajay around. His cousin Sundar (?) had been given news of Ajay’s death in Kashmir six months previously, and has ever since been considering himself the heir to Ajay’s millions. With Ajay back, alive and kicking, Sundar’s dreams of wealth untold have gone kaput. It would be so much better if Ajay were out of the way…

With the bank robbers and Sundar both trying to kill Ajay; with his memory gone on the blink; and with the lovely Asha God knows where, how will Ajay survive? Who will win through? (Yes, well: this being a mainstream Hindi film, one sort of knows who will win through eventually, but how?)

The music, by O P Nayyar: sublime. There are lots of songs in the film, but my favourites are Mujhe dekhkar aapka muskuraana, Bahut shukriya badi meherbaani and Zabaan-e-yaar-e-mann Turki. 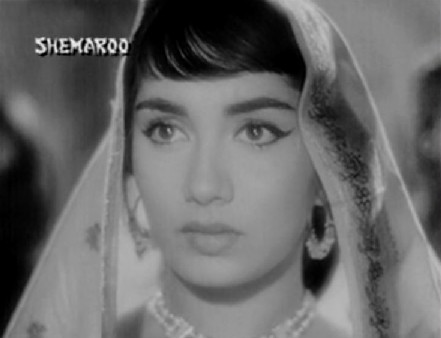 There’s something very lopsided about the structure of this film. Take the first half: it proceeds at a very leisurely pace, mainly one love song after another as Ajay falls in love with Asha and she with him. Other than her groom’s occasional attempts to get her back, not much happens. Worse, the romance is unconvincing, especially on Asha’s part. On the one hand, when she’s singing, she’s coquettish (wouldn’t you think a girl who called you ‘haseen jaadugar’—handsome magician, literally—was more than merely interested in you?). But when she isn’t singing, she’s trying to keep her distance from Ajay. In any case, the conflicts Ajay and Asha face in their romance—her groom, her initially greedy chachaji, her threatening father-in-law—are all pretty half-baked.

In the second half, everything changes, with the action shifting to Bombay, the pace speeding up and the multiple attempts on Ajay’s life becoming the focus of the film. With Raj Khosla (the master of the suspense thriller) as the director, I’d have expected this bit to be more interesting, but it has too many plot holes, loose ends and implausible motives to be convincing. Too many people crowd the scene with too many motives for getting rid of Ajay, and some of them peter out for no rhyme or reason.
It’s as if the makers of the film started off with a wide canvas of villains and henchmen and molls, then lost track somewhere along the way and decided to concentrate only on some villains—without accounting for the rest.

A less complex plot, fewer characters, a shorter film, and this could have been very entertaining.
As something that merely looks and sounds good, Ek Musafir Ek Haseena is worth a watch. Don’t expect more than that.