The last time I visited my parents, my father lent me a couple of DVDs—old Hindi films (whose pa is he anyway?!) which he particularly likes. One was Ratan, which I’ve yet to see; the other was this. “Bhagwaan is hard to accept as a hero,” my father said. “But the music is C Ramchandra at his best.” I agree, on both counts. Watch Albela for C Ramchandra’s score. And yes, also for Geeta Bali at her loveliest and brightest.

Otherwise too the film isn’t bad—at least not through most of it. It is a trifle too melodramatic in places, and many of the scenes that I suppose were meant to be funny didn’t amuse me a bit. But the story is a simple one of the usual family drama genre, and there are some known faces here.
The family in question is that of Pyarelal (Bhagwaan). Pyaarelal lives with his parents (Badriprasad and Pratima Devi), his brother (?), the brother’s wife Malti (a very young and fresh-faced Dulari) and Pyarelal’s younger sister Bimla ( Bimla Kumari, as Tom Daniel tells me; better known as the actress who appears in this classic song, and this).

Bimla’s wedding has been fixed, and the paterfamilias is beginning to get worried about where the money to pay for the festivities is going to come from. He says that he has managed to save Rs 1,000; if Pyarelal and his elder brother between them contribute a further Rs 1,000, they’ll be able to pull through. Pyarelal airily assures everybody that he’ll be able to do that, and then goes off to eat his dinner and be sung to by Bimla. 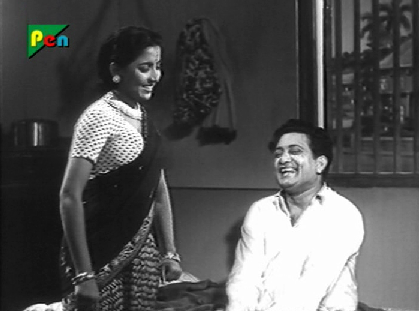 Unfortunately, destiny—and Pyarelal’s passion for the theatre—plays a rude trick on them. Pyarelal is so fond of naach-gaana that he goes nearly everyday to the theatre. When he isn’t at the theatre feasting his eyes on the prima donna Asha (Geeta Bali), he’s singing and prancing about in office. And just now, when he’s getting ready to ask his boss for a loan to pay for Bimla’s wedding… bang! The boss barges in on Pyarelal’s shenanigans and, sick of Pyarelal’s constant neglect of his work, sacks him. Pyarelal is given Rs 100 in full clearance of his dues, and is told to get lost.

As if that wasn’t enough, worse news awaits him at home: his brother says that his (the brother’s) boss has refused to give him a loan. Everybody’s very despondent.
In the midst of all this sorrow, Pyarelal’s announcement that he has been kicked out of his job is the final straw on the camel’s back. Daddy throws a fit and slaps Pyarelal; Mummy tries to intervene; and it all ends with Pyarelal leaving the house and vowing that he will return only when he has become a big artiste. His mother, heartbroken at his departure, gives him her blessings but is unable to stop him from going. 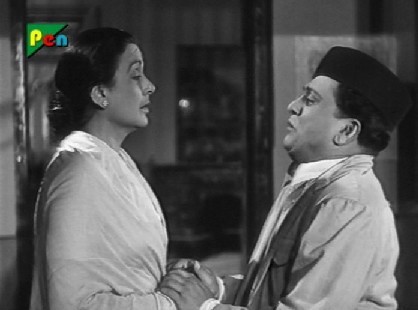 Pyarelal goes to the office of the Eastern Theatrical Company, where he manages to get hold of the manager (Sundar). Also with the manager is the beauteous Asha, and Pyarelal, seeing her up close, is instantly and irredeemably besotted. His pleas to be allowed an audition, however, fall on deaf ears: the manager tells him to leave an address where they can contact him if need be. 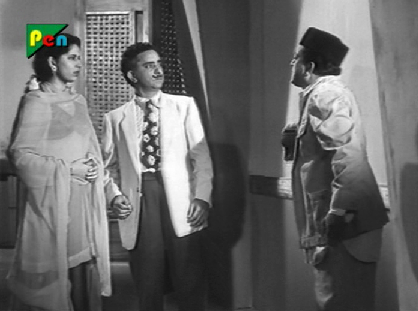 Even though Pyarelal puts up an impromptu show on the road outside the theatre, he remains jobless.
One evening, though, fortune smiles on Pyarelal. He discovers that the house outside which he’s been sitting is that of Asha. He barges in, begging her for a job, and when she says she doesn’t have the authority—that rests with the manager—Pyarelal asks her for any employment she can give him. Anything. 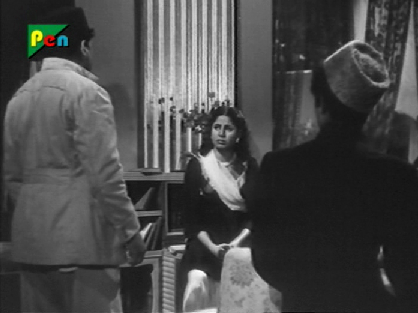 Pyarelal ends up washing dishes in Asha’s home, and sings songs while he goes about doing that. Accompanying him is Chameli (?), who’s been cooking at Asha’s house for the past two years in the hope that someday she will finally be noticed and will strike it rich as an actress. 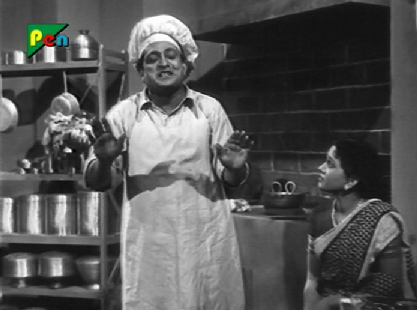 Luckily for Pyarelal, Asha hears his singing and is very impressed with his talent. She recommends him to the theatre manager, but Pyarelal’s first audition is a bit of a disaster (he is—inexplicably, since he’s a singer—asked to dance, and proves to have two left feet). Asha, however, is so convinced of Pyarelal’s potential that she decides to coach him, and before we know it, Pyarelal can shake a leg as well as any singing star. And Asha, the first time she sees him in a suit, falls in love with him. (Yes, there’s no accounting for tastes). 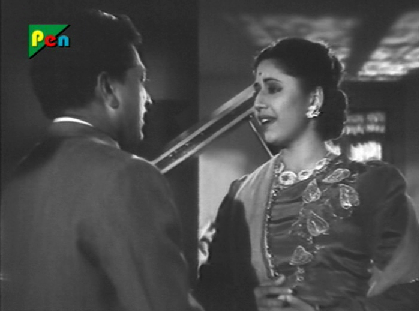 Meanwhile, disaster strikes Pyarelal’s family. While Pyarelal’s mother and Malti have been away at a neighbour’s (the menfolk, in any case, were out), Bimla has left the house unattended. Someone has stolen the thousand rupees that had been saved for Bimla’s wedding. Now Pyarelal’s father is shrieking at Bimla, hitting her with his walking stick, and telling her he wishes she hadn’t been born.

With the family already in such dire straits, they’re even more devastated when Bimla’s father-in-law to be (or not to be, as it turns out) arrives. When Bimla’s father reveals the state of their finances, the man calls off the wedding. Bimla’s parents try everything to persuade him: pleading with him and vowing that if he pays for the wedding now, they’ll pay him back later, as soon as they’ve saved up enough money. It doesn’t work, though, and he departs in a huff. 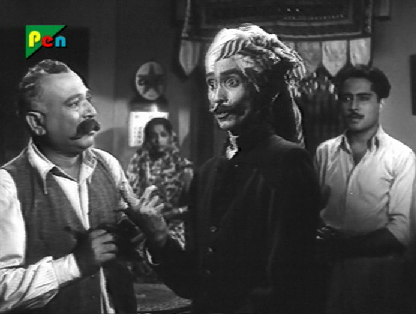 While Bimla’s father is busy cursing her all over again, Bimla’s mother collapses and falls so seriously ill that she has to be hospitalised. Fortunately, there is a government-run charity hospital nearby, so they don’t have to pay a paisa for her treatment. On the other hand, the hospital doesn’t seem to be too good; some time later, the mother dies.

What’s going to happen to this family? Will they be able to shake themselves free of the tragedy upon tragedy that seems to be striking them? Will Pyarelal—hopefully now on his way to becoming the artiste he’d always dreamed of being—finally make it and be able to help his family?

Geeta Bali! I realised, while I was writing this review, that I’ve never before reviewed a Geeta Bali starrer on this blog (Mujrim, perhaps, but she’s just got an item number there, not a substantial role). Albela, even though she doesn’t get the opportunity to show off her acting ability, is a good Geeta Bali showcase: she’s pretty and vivacious and lively enough to make up for a lot of the things that aren’t right with this film…

Bhagwaan. I have never been a Bhagwaan fan, and the thought of a film that starred him as the hero didn’t exactly appeal to me. If Pyarelal had been a madcap hero, a walking cartoon all the time, it would have been okay by me. But he isn’t; he’s a romantic hero, a devoted son, dramatic and tragic and only very occasionally funny—and then too, not really. Halfway through the film, I was thoroughly sick of that curling lip, flaring nostrils and wide eyes that were supposed to be so comic. I can understand that Bhagwaan (who wrote, directed and produced Albela) wanted to star in his own film. But if he wrote it, he should have written a more believable role for himself.

Another thing that irritated me no end was the family: such a bunch of unlikeable people. Not that Albela is out of the ordinary in that respect; a lot of films from the 50’s and 60’s featured families like that, constantly hitting each other and berating each other and being thoroughly rude—besides being past masters at the art of emotional blackmail.

And the way Pyarelal treats Asha at the fag end of the film is unforgiveable. She’s a duffer too, for smiling prettily and forgiving him everything.

If only one could blot Bhagwaan and his filmi family out of Albela and replace them with someone like Ajit (and a more understanding, mature and emotionally intelligent set of parents and siblings)…

P.S. Pacifist has just reminded me that Tom Daniel had created a subtitled DVD version of Albela and made it available for anyone who’d like to watch. Richard made an announcement to this effect at the end of his post on the film. Do go check it out! (By the way, that’s what I call co-operation: Tom ‘cleaned up’ the audio and video, Ava subtitled some of the songs, Richard posted the announcement, and pacifist reminded me about it. Thank you, all)!