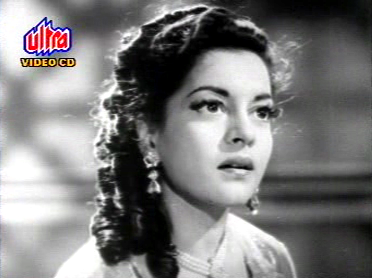 Munimji is one of Nalini Jaywant’s hit films, even though her role in it doesn’t allow for a sufficient display of her talents as a thespian (for that, I’d recommend Kala Pani and Nastik, among others). Despite that, though, I think of this as a film worthy of Nalini Jaywant herself: entertaining, with a certain amount of depth, and very easy on the eyes.

The film begins in the present day (1955), where a bandit who calls himself Kala Ghoda is going about murdering and looting and generally wreaking havoc in the countryside.
Bela (Ameeta), a woman who dances in the streets, happens to be the only one who knows his identity—because he is her husband. He manages to wheedle her into doing just about everything for him, including being an accomplice.

A little deft toing-and-froing between scenes, and we learn that Kala Ghoda is in reality a wealthy wastrel named Ratan (Pran). Ratan’s father Ramlal (?) died when Ratan was a baby, so Ratan has been brought up by Ramlal’s friend, a Captain (?). And, very importantly, he’s been brought up by a doting maid, Malti (Nirupa Roy). Malti dotes on Ratan to such an extent that she neglects her own son Amar (Dev Anand, disguised in fuddy-duddy shapeless coat and dhoti, wearing glasses, a large moustache, a huge mole on his cheek, and a cap with a long lock of hair dangling at the back). He also drags one leg and speaks in a high-pitched singsong voice that adds to his overall unattractiveness.

Having established the fact that Malti neglects Amar in favour of Ratan, the film swishes into the past, and we get to see the reason for this strange preference for the unlovable Ratan.
A young Malti, with a baby in her arms, comes to meet Ramlal and overhears a conversation. Ramlal’s wife has recently died, leaving behind a baby boy. Ramlal, chatting with his friend the Captain, readily agrees to the Captain’s wish that should the Captain someday have a daughter, she will be eventually married to Ramlal’s son.

When the Captain takes himself off, Malti comes forward and tries to persuade Ramlal to accept the baby she’s holding. It turns out that Ramlal had married Malti and left her pregnant while he went off and married another woman. Now, with Ramlal’s other wife dead, Malti’s come to ask for her rights—or at least for the rights of her baby. Ramlal refuses to have anything to do with Malti and boots her out… 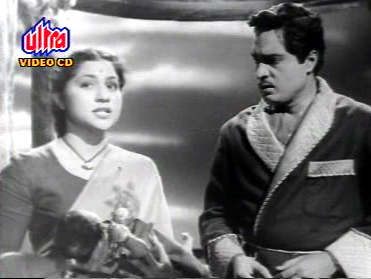 …so that night, Malti returns and exchanges the two babies. She leaves her baby next to the sleeping Ramlal, and takes away his child. Ramlal, when he wakes up, figures out what happened, and comes to Malti demanding his son back. In the process, Ramlal gets bitten by a snake and very conveniently dies. Malti ends up with both babies, working as a maid in the Captain’s house, bringing up her own son Ratan as Ramlal’s heir, while Ramlal’s other son is brought up as Malti’s own, long-neglected ‘son’, the munimji, Amar.

All the while Amar and Ratan are growing up, Malti makes no attempt to hide her own feelings. Ratan, though he kicks her and treats her like dirt, is her darling. Amar, though he hits out at Ratan when Ratan abuses Malti, only gets a scolding from Malti for his efforts. She even pleads with Amar to let Ratan thrash him!

Now that they’re grown up, things are no better. Ratan still treats Malti with contempt; Amar still tries to protect his ‘mother’; and the ‘mother’ still favours Ratan. And Amar keeps his munimji disguise on because a good-looking and smart Amar will infuriate Ratan.
In the meantime, the Captain’s daughter and Ratan’s fiancée Roopa (Nalini Jaywant) returns home after a long time abroad. Roopa is fashionable in a Westernised way, and keeps handing out baksheesh to the munimji, who has been deputed to help transport her and her bags home. 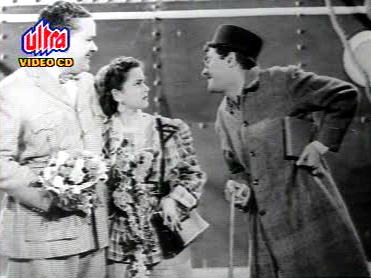 Which immediately gets Amar’s dander up. While Roopa drives off in her own car, Amar strips off all that oh-so-boring munimji makeup, and emerges as his own dazzlingly irresistible self. Some convoluted car-swapping, overtaking and car-conking-out later, Roopa finds her own car being hijacked by a handsome stranger who bullies her into letting him not just drive the car, but also sing. 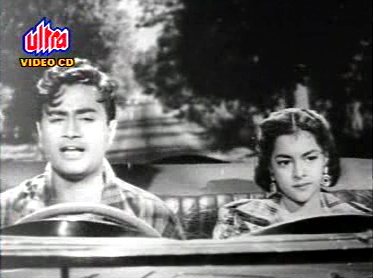 Over the following days, Roopa keeps bumping into the man, whose name is Raj. Raj meets her at a gambling club, where he exposes one of Ratan’s men who’s been cheating at cards at Ratan’s behest. Raj ends up playing—and defeats Roopa roundly.

Raj also saves Roopa from a tiger that appears while she’s out swimming. And, when she falls off a horse, he’s the one who picks her up and is not just solicitous, but loving. Roopa, already pretty much infatuated despite her constant bickering with Raj, falls in love with him. He tries to shake her off by leaving a note saying that they should part ways—but Roopa is a girl who knows her own mind. Some cajoling, some flirting, and a good song, and she’s got Raj eating out of her hand again. 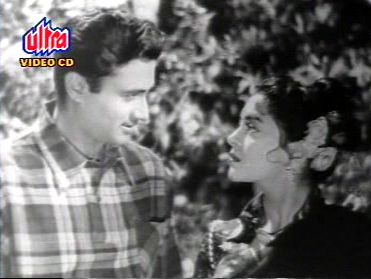 But how long will life be roses all the way for Raj and Roopa? Malti, hovering in the background, soon discovers that Raj aka Amar is romancing Roopa, who after all is Ratan’s fiancée. So Malti goes to Amar and uses emotional blackmail on him to convince him to give up Roopa. Your mother or Roopa? If you continue this relationship, I will kill myself. Ratan is your master; you should not betray him thus.
And so on and so forth. 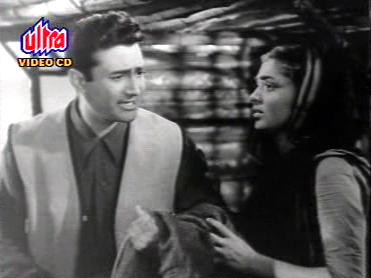 Does Amar agree? Does his love for Roopa win, or does his love for, and his duty towards, his heartless, selfish and undeserving ‘mother’ triumph? Where do the Kala Ghoda and his wife come into the picture vis-à-vis Ratan and Roopa? And when will Roopa realise that the shabby munimji and the suave Raj are one and the same? 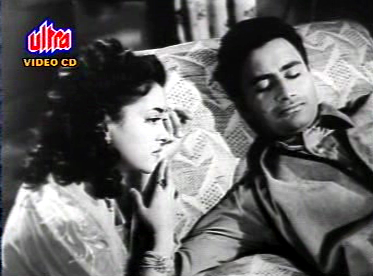 Nasir Hussain, the man who went on to make Tumsa Nahin Dekha, Dil Deke Dekho, Jab Pyaar Kisise Hota Hai and Phir Wohi Dil Laaya Hoon, also scripted Munimji (the director was Subodh Mukherji). There are basic similarities between the films: the long-lost heir to a fortune, masquerading as a mere employee; babies—male and female—promised to each other, and going on to fall in love as adults, but without knowing that they had been destined for each other in infancy (!); and a villain who wants to marry the heroine for her wealth while himself pretending to be wealthy. Of course, in Munimji, Ratan doesn’t know he’s not really the heir to Ramlal’s fortune, but still. What sets Munimji apart from the others is that it doesn’t exactly follow Nasir Hussain’s cookie-cutter storyline. There is the somewhat disturbing fact that Amar and Ratan are, after all, half-brothers. Then there is Malti’s utter selfishness, and Amar’s corresponding distress and frustration. This is not a film with the depths of a Pyaasa or a Parakh, but it is a little more than a mere romantic and dramatic tragicomedy.

Nalini Jaywant and Dev Anand as Roopa and Raj/Amar. She is beautiful; he is handsome. But more than that, they’re also great together: flirtatious, gentle, emotional, playful. I love the way their relationship passes through different phases, beginning with him getting on her nerves, then the realisation that they’re falling in love, followed by Raj’s trying to break free from her—and Roopa’s playful teasing to get him back. And, though I did say that Munimji doesn’t allow Nalini Jaywant much scope for histrionics, she does get to act something more than just irritated or charming or playful. The obstacles in the way of her romance may drive Roopa into deepest sorrow, but they also bring forth a wealth of emotions—and Nalini Jaywant portrays them beautifully.

The music! Munimji had fantastic songs, scored by the inimitable SD Burman. Though Jeevan ke safar mein raahi (sung in two versions, male and female) is probably the best known, some of my other favourites are Ek nazar bas ek nazar, Nain khoye-khoye tere dil mein, and Dil ki umangein hain jawaan. And, a very special mention: Shivji bihaane chale palki sajaaike. Everything about this song is superb: SD Burman’s music, Hemant’s rendition, Sachin Shankar’s choreography, the picturisation. The song also refers pointedly (and obviously) to the story of Munimji itself; there’s a definite parallel between Shiv disguising himself before Parvati and the world, and Amar doing the same for the woman he loves, Roopa.

Malti. Yes, Nirupa Roy’s acting is good (it won her a Best Supporting Actress award), but Malti is so selfish and heartless, I really hated her as a character.
Interestingly, Nirupa Roy was just 24, 8 years younger than Dev Anand and 11 years younger than Pran when she played their ‘mother’ in Munimji.

And there are some silly, pretty pointless scenes featuring Amar disguised as a sanyaasi/soothsayer, who with the help of his pet elephant, repeatedly manages to hoodwink Ratan.

Despite those hiccups, this is an entertaining and enjoyable film—and a good showcase for Nalini Jaywant.