Dil Deke Dekho isn’t quite the perfect film I’d like to make it out to be.
(a) The story isn’t exactly original (Nasir Hussain had already used it in Tumsa Nahin Dekha. He also went on to use it in Jab Pyaar Kisi se Hota Hai and Phir Wohi Dil Laaya Hoon, but that can’t be laid at the doorstep of Dil Deke Dekho).
(b) The plot is too complicated, relies too heavily on convenient coincidences, and has some unbelievable – and often unclear – motives.
(c) The lead actress, Asha Parekh (just 16 years old), though pretty as a picture, isn’t a terribly good actress at this stage of her career.

On the other hand: the film stars Shammi Kapoor. 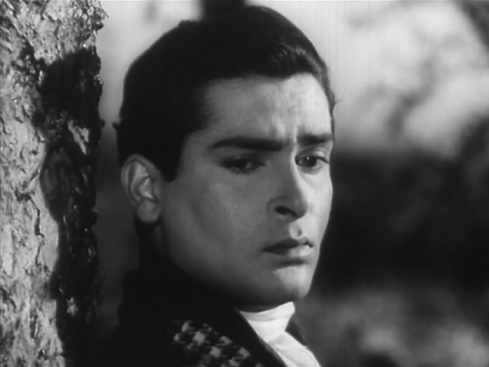 That may sound very biased, but let’s be honest. This was Shammi Kapoor’s film, all the way. He ruled it. He was charming, suave, the perfect lover, the perfect son, the perfect everything. He was even better in this than he had been in Tumsa Nahin Dekha, enacting an almost-identical role to the one that had catapulted him to stardom two years earlier.

The film begins in the past, with Harichand (Wasti) coming to meet his mistress Nagina (Indira Billi) with the happy news that he has carried out a thoroughly nefarious plan to lay hands on a vast amount of wealth.
A stranger – resembling Harichand in build and height – had turned up at Harichand’s house, and had died there of a heart attack. Harichard has put his own clothes on the corpse, shot the corpse through the face badly enough to disfigure it beyond all recognition, and has planted a letter on the corpse. The letter is addressed to Jamuna Devi (Sulochana Latkar), the wealthy woman who is Harichand’s employer.

While Harichand and Nagina watch from the window of her house, Jamuna Devi arrives with her husband Rana Raghubir (Surendra). She finds a crowd gathered outside Harichand’s home. The police are there too, and dissuade her from trying to see the corpse for herself; it’s too badly mutilated, says the inspector. He does, however, tell her that a letter addressed to her has been found in the pocket of the corpse.  Jamuna Devi asks the inspector to read out the letter. 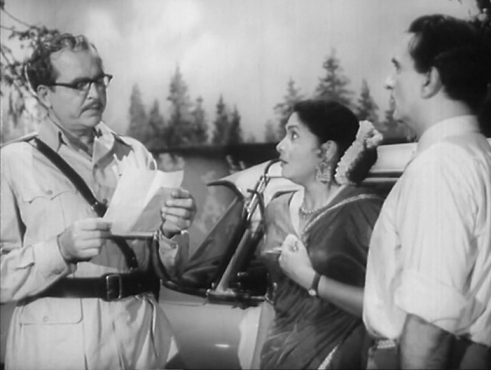 The letter, in Harichand’s handwriting, implies that Jamuna Devi and he (Harichand) have been having an affair for several years, and Harichand has now given up hope of ever having her all to himself, so he’s committed suicide. He also implies, in his letter, that his little son Kailash, whom Jamuna Devi has been bringing up with her own toddler Roop, is in reality the illegitimate child of Harichand and Jamuna Devi. 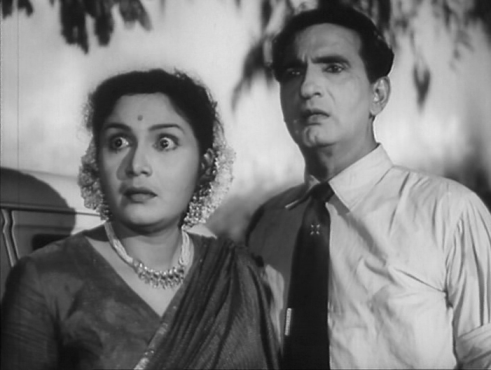 This results in a huge to-do between Jamuna Devi and her husband. The poverty-stricken Rana Raghubir has always been aware that he’s married a very wealthy woman, and now accuses her of marrying him simply for his youth and his looks (considering they’ve been married only three years, he seems to have gone to seed superquick).
Poor Jamuna Devi does all she can to deny the ‘dead Harichand’s’ filthy allegations, but to no avail. Rana Raghubir, in a fit of anger, gathers up his son Roop and leaves. 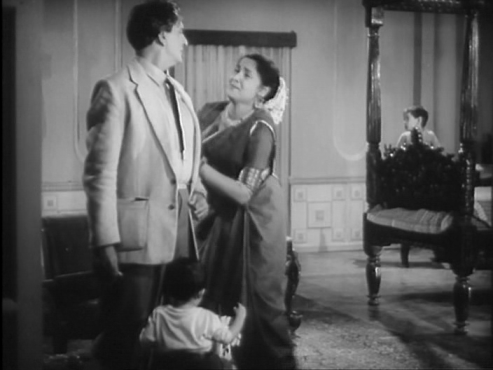 Years pass. Jamuna Devi has brought up Kailash (now Rajendranath) as her foster son.  Kailash has been looking after the operations of the Royal Hotel in Ranikhet, which Jamuna Devi owns – and has been drawing money for his own use left, right and centre. He’s a buffoon and a moron, but he’s also a spendthrift, and Jamuna Devi is most annoyed when she discovers what Kailash has been up to. 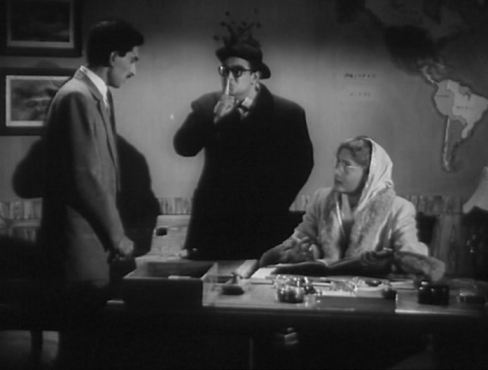 In the meantime, our heroine appears on the scene. This is Neeta (Asha Parekh, billed as ‘A Filmalaya Discovery’, though she had been a child actress, and had even appeared as Vyjyantimala’s friend in Aasha in 1957). Neeta is the daughter of Jagat Narain ‘Jagat Babu’ (Raj Mehra), a friend of Rana Raghubir and Jamuna’s. Jamuna has already willed half her substantial property to Neeta. Jamuna and Jagat Babu have decided that Neeta and Kailash will be married once Neeta, who’s been studying in London, returns. Neeta is back in India now, and Kailash is eager to get his hands on Neeta and all her gorgeous money.

The surgeon is in Delhi, so Rana Raghubir’s friend Murli (Mumtaz Ali, the father of Mehmood) offers to accompany Rana Raghubir from Nainital (where they stay) to Delhi.
There’s a silly digression here now. Neeta, who’s in Nainital, is told by one of her friends that a drummer at a hotel had slapped one of Neeta’s friends after having led her on. Neeta vows to avenge her friend’s disgrace. We end up with a song, some tamaasha, and poor Roop (who’s the drummer in question) being thrown out of his job.

What now? With no job, Roop has no money to pay for his father’s eye operation. Murli’s son (and Roop’s buddy), Tom (?) points out an ad in the newspaper: the Royal Hotel in Ranikhet needs a bandmaster. Roop is bound to get the job; they should go to Ranikhet at once.

But Roop has another plan (actually, only a ploy to inject some more songs and some rather tedious comedy into the plot).
Roop tells Tom that in foreign countries, there are private investigators; why shouldn’t he (Roop) offer his services as one? He has published an ad in the newspapers, calling himself Professor Saamri – and there have already been two requests for Professor Saamri to meet potential clients.

These turn out to be:

(a) Kailash, who hires Saamri to get rid of Chandra, some no-account young man whom Neeta has brought to her home to recuperate after he had an accident; Kailash fears that Neeta is getting too fond of Chandra. 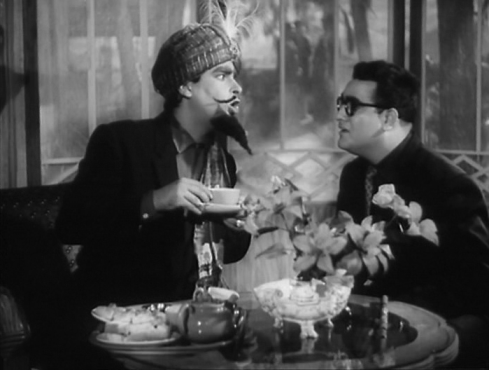 (b) Neeta herself, who wants Saamri to get rid of Kailash – as in, break off the ‘engagement’ – for her.

This is followed by some convoluted and idiotic twists and turns, with Chandra and Kailash both getting the boot, and Neeta being eternally grateful to Saamri. She has already, by the way, met Roop in his undisguised form. He’s told her his name is Raja, and they’ve had several rather melodious run-ins. Neeta is attracted to this stranger, but always manages to resist temptation. 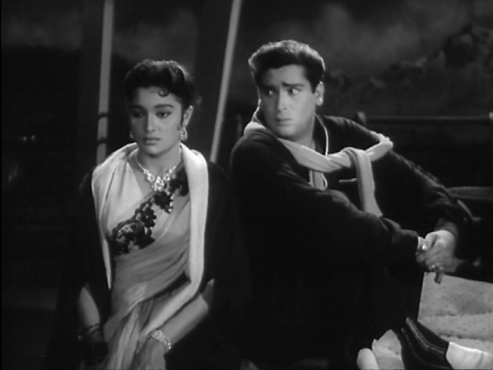 Roop hands over the money he’s earned as Saamri, to Rana Raghubir. Roop and Tom decide to go to Ranikhet and apply at the Royal Hotel.
Murli and Rana Raghubir set off by train for Delhi. On the way, just as the train is pulling out of the station, Jagat Babu – who’s come to see off a friend – sees and recognises Rana Raghubir. He cannot stop the train, but he begins enquiries to discover where Rana Raghubir lives. Jamuna, on being told, is very grateful and hopes to be reunited with her husband soon.

When Rana Raghubir and Murli get off at Bareilly to change trains, Rana Raghubir discovers that someone has picked his pocket and made off with the money. Now what?
As luck would have it, also on the platform is an old enemy: Harichand. Harichand has been living in Rangoon all these years, and has now returned along with his son Sohan (Siddhu, in his debut).

Harichand recognises Rana Raghubir immediately, and Sohan decides to go and find out what Rana Raghubir is up to. The blind man confides in this solicitous young man, and tells him all: about Roop alias Raja, the stolen money, the operation in Delhi, and so on. Sohan tells Rana Raghubir that he, Sohan, is headed for Ranikhet and can carry a letter for Roop, if needed. A grateful Rana Raghubir agrees, and scrawls a letter to Roop, which he gives to Sohan along with a photo of Roop’s, so that Sohan is able to recognise Roop.

Sohan and Harichand set off for Ranikhet and the Royal Hotel, where some more snooping around yields results. They discover that Jamuna Devi has willed half her wealth to Neeta and the other half to her son Roop (who, of course, is still lost). Now all Sohan needs to do is convince Jamuna Devi that he, Sohan, is in fact her long-lost son Roop. Then, if he marries Neeta, he will not only get Roop’s share of Jamuna Devi’s money, but also Neeta’s share, since he intends to kill Neeta.

If you think that’s complicated enough, watch on. There are many more plots and subplots, twists and complications and misunderstandings…

…and, to redeem it all, a romance and some lovely songs.

Frankly, of all the versions of this well-worn story of Nasir Hussain’s, I think Dil Deke Dekho is the most complicated. It’s not incoherent, but after a while, I began losing the thread of how and why people were doing what they were doing. Despite that, I don’t know how many times I’ve watched this film, simply because it’s such a wonderful Shammi Kapoor showcase.

Shammi Kapoor. He’s so much fun, so very much the epitome of the romantic-comic-heroic Hindi film hero of the 50s and 60s. And, oh, he looks so good. 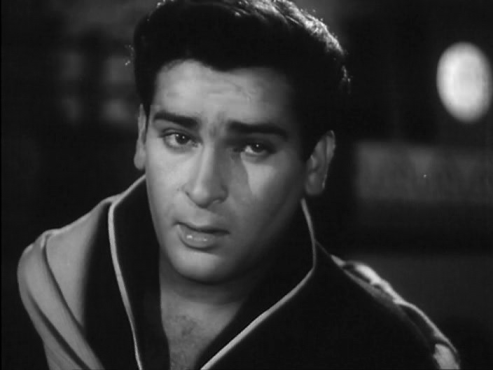 Asha Parekh. One of my favourite actresses, though here her acting skills are still raw; she’s a little gauche in places. But very pretty nevertheless. 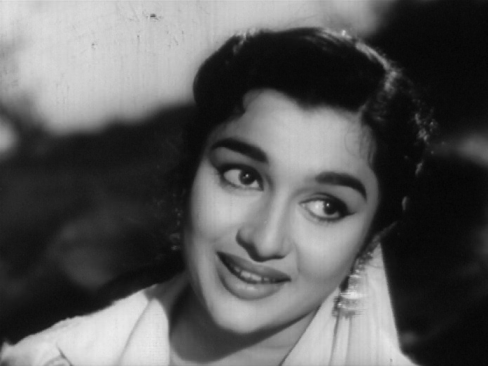 The music, by Usha Khanna (another ‘Filmalaya Discovery’). Even though the score of Dil Deke Dekho had the dubious distinction of borrowing three tunes almost verbatim from Western songs (the title song is based on the McGuire Sisters’ Sugar in the morning; Pyaar ki kasam hai is a copy of Ivory Joe Hunter’s Since I met you baby, and Meri Neeta is a very easily recognisable copy of Paul Anka’s Diana)… a lot of the other songs are very, very nice. My particular favourite is Hum aur tum aur yeh samaa, but Bade hain dil ke kaale and Yaar chulbula hai haseen dilruba hai are almost as good.

And, house favourite Edwina Lyons can be seen in several scenes as one of Neeta’s friends:

And some of the costumes. Please. What was Bhanu Athaiya thinking of?

I have watched Dil Deke Dekho at least a dozen times. I know most of the plot (which doesn’t mean all of it makes sense to me!), but I still love to watch it – because it’s so easy on the senses, so entertaining and lovely and unbeatable time-pass.