This wasn’t the post I’d planned for this week on Dusted Off. I’d been thinking, instead, of reviewing a Hollywood film—one which I happened to be watching when I received the news that Nanda had passed away on the morning of March 25. I changed my mind about writing a review; instead, I had to do a tribute to Nanda. Not just because I share my birthday with her, but because I think of her as an actress who deserves to be more highly regarded than she usually is.

Nanda arouses different emotions in different people. I know she does in me. In a weepy family drama like Bhabhi or Chhoti Bahen, she can be far too melodramatic, too easy to dismiss. Few people list her as one of the greatest actresses of the Hindi silver screen. Even fewer think of her as one of the most gorgeous faces, or the best dancers (far from it!) of the 50s and 60s.

What many tend to overlook is Nanda’s versatility, and that is what I like about her. While the more usual image of Nanda is of the sari-draped, demure and very shy young heroine (or, in her early films, the supporting actress) of Qaidi No. 911, Usne Kaha Tha, or Agra Road, she was also the quiet but hopeful wife of a wounded officer in Hum Dono; the sweet neighbour inTeen Deviyaan; the pampered darling of a millionaire father in Jab Jab Phool Khile; and—in one of her most outstanding performances—the mercurial (and intriguing) housewife, alone in her house with an escaped criminal, in Ittefaq.

So, to celebrate Nanda’s life and career—and to wish her farewell—a selection of ten of her songs that I particularly like. These are all from pre-70s films that I’ve seen, and in each song, Nanda’s character does some—if not all—of the singing. In no particular order:

1. Waadiyaan mera daaman (Abhilasha, 1968): While the male version of this song is the more popular one, I also love the female version. Sung by Lata, this rendition isn’t absolutely identical, even as far as music is concerned, to the Rafi rendition. A beautiful, melodious song, and Nanda brings alive the character and her situation. This woman, out on a drive with a male friend (no more than a friend), remembers the song sung to her by her beloved, and begins to sing it too. She’s so lost in her thoughts of him that she even forgets the man she’s with—the dreamy, faraway look in her eyes, the absent-minded way in which she touches the car’s bonnet, or the way she looks out over the hills: all a sign of not singing to herself or to the person she’s with, but to someone far, far away. 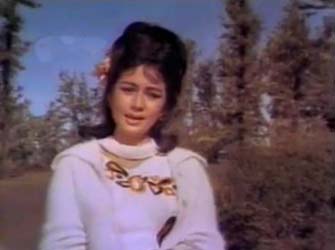 2. Likha hai teri aankhon mein (Teen Deviyaan, 1965): In Teen Deviyaan, Nanda played (literally) the girl next door, Dev Anand’s neighbour. Pitted against the glamorous socialite Simi and the popular actress Kalpana, Nanda was the refreshingly playful, down-to-earth girl who thought nothing of going on picnics in the fields, eating bhuttas, chasing after a passing pony (and bagging a lift on it!) This was Nanda at her most adorable and sweet.

3. Allah tero naam ishwar tero naam (Hum Dono, 1962): One of Nanda’s most famous songs, and one of the very few devotional songs from Hindi cinema that I like. Nanda’s character in Hum Dono was an interesting one: a woman who suffers from a weak heart and who’s had to bid farewell to her husband, an army man. She’s fragile, sheltered, protected—and yet, eventually, not as helpless as one may imagine. And of finer moral fibre than perhaps even her husband realises.

Nanda had a smaller role than the other female star (Sadhana) in Hum Dono, but in this song, with its plea for mercy and peace and brotherhood, Nanda softly shines. The earnestness, the fear in her eyes—yet the perhaps forlorn hope that all will be well—is memorable. 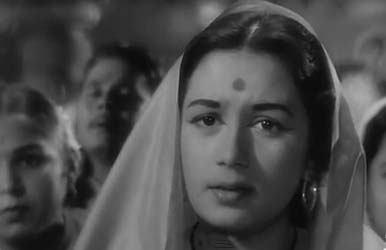 4. Na main dhan chaahoon (Kaala Bazaar, 1960): And—after having said that I’m not fond of too many bhajans from Hindi cinema—I go on to add another one, also picturised on Nanda (who, interestingly, seems to have had her share of onscreen bhajan-singing; Hum Dono itself had another, lesser-known bhajan, Jo dhyaaye phal paaye; Beti featured Shyaam dhun lagi ).

Here, in Na main dhan chaahoon—my all-time favourite filmi bhajan—Nanda is teamed with Leela Chitnis, in a song that does not weep or beg God for mercy, but merely asks for strength to withstand temptation and the lure of the world. This is a marginally younger Nanda than in Hum Dono, but just as earnest and lovely. 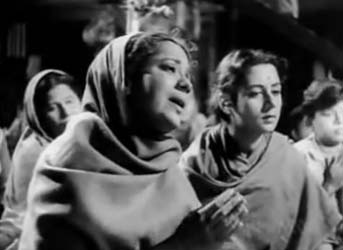 5. Pyaar bhari yeh ghataayein (Qaidi No. 911, 1959): This film was an unusual one in several ways: the prisoner for whom it was named was, for one, not the hero of the film. For another, it starred—as a non-comic, fairly run-of-the-mill hero, Mehmood. The good thing, however, was that Qaidi No. 911 had some superb music. I was torn between Meethi-meethi baaton se bachna zara and this one, and finally settled for Pyaar bhari yeh ghataayein, simply because the music is so lovely, lilting and infectious. And Nanda, demure and shy, does seem to fit so well with Mehmood. 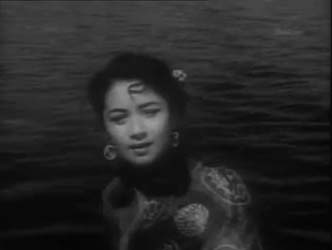 6. Jo humpe guzarti hai (Mohabbat Isko Kehte Hain, 1965): Shashi Kapoor started his acting career as an adult in a none-too-heartening way, because no actresses were willing to work opposite this newcomer, even if he was from the illustrious Kapoor clan. Except for Nanda, who agreed to work with him in Mehendi Lagi Mere Haath, and went on to be his co-star in a slew of other films, including Jab Jab Phool Khile, Raja Saab, Neend Hamaari, Khwaab Tumhaare, and Mohabbat Isko Kehte Hain.

Jo humpe guzarti hai is pretty much quintessential Nanda for me: sari-clad, pretty but not glamorous, her hair blown about by the wind, singing of loneliness and sorrow, but also of hope. 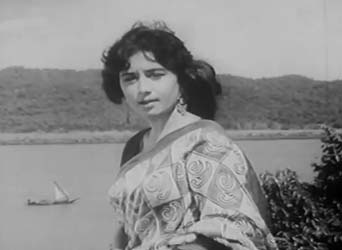 7. Yeh samaa, samaa hai yeh pyaar ka (Jab Jab Phool Khile, 1965): Another film that starred Nanda opposite Shashi Kapoor, but a Nanda poles apart from the one in Mohabbat Isko Kehte Hain. In Jab Jab Phool Khile, Nanda played the very Westernised Rita, spoilt by a wealthy father, and used to having her own way in everything. In this song—pretty much towards the beginning of the film—we see a Nanda very different from the Nanda of many earlier films: a sultry Nanda, in white satin, singing of the beauty of the night, a night made for romance. 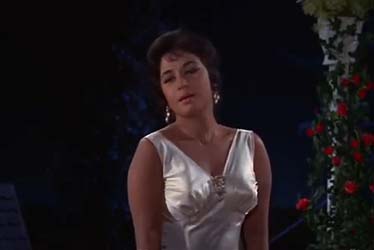 8. Jaan-e-chaman shola badan (Gumnaam, 1965): Like Yeh samaa, samaa hai yeh pyaar ka, Nanda in a markedly different avatar from her Bhabhi and Hum Dono roles: in Gumnaam, she’s quite Westernised (down to the point of a daaru song, with Helen)—and she doesn’t seem at all uncomfortable in this seductive song. I admit I would have far preferred Asha singing playback for Nanda (Sharda isn’t a favourite of mine). And a jungle possibly peopled by spooks and/or murderers doesn’t appeal to me as a venue for a bit of cootchie-cooing. But the song itself, music and lyrics, is deliciously sexy, and the chemistry between Nanda and Manoj Kumar is good.

9. Aha rimjhim ke yeh pyaare-pyaare geet liye (Usne Kaha Tha, 1960): Besides Shashi Kapoor, another actor who often starred opposite Nanda was Sunil Dutt, her co-star in films like Aaj aur Kal, Nartaki, and Usne Kaha Tha, all far from frothy films that dealt with various socio-political issues, and human nature with all its frailties and flaws. Usne Kaha Tha was not a peppy film—it was about a doomed love—but Aha rimjhim ke yeh pyaare-pyaare geet liye was a delightful song, light and catchy. And Nanda was perfect as the fresh-faced, innocent Punjabi village girl who falls in love with the local bad boy.

10. Tie lagaake maana ban gaye janaab hero (Bhabhi, 1957): Bhabhi was by no means a laugh riot. It was, to be honest, a frightfully depressing and melodramatic film, in which Nanda played a child widow who grows up unaware even that she is a widow or was ever married. Bhabhi, however, had as a saving grace some good songs—and Tie lagaake maana ban gaye janaab hero was Nanda’s chance to show what an unfettered clown she could be. She prances about, making faces, dancing, wheeling Jagdeep along in his chair as she teases him mercilessly.

RIP, Nanda. You will be missed. Your sunny smiles and laughing eyes, your dignity, your ability to make your characters so believable—all will be remembered.

82 thoughts on “Ten of my favourite Nanda songs”