When I posted my ‘People with books’ list on World Book Day, I wrote that my favourite scene (in the context of the post) was the one from Izzat: Tanuja and Dharmendra, both holding books (he, Othello, she, The Tribal World of Verrier Elwin), standing in a fairly well-stocked library at her home, and discussing Othello. What more could a book lover like me want from a scene? Especially a scene starring two of my favourite actors.

To those readers who commented, saying that they should probably watch Izzat since it sounded tempting, I was quick to respond: it has been many, many years since I watched this film. My memories of it were very sketchy, with only a vague recollection of the basic plot.

So, for those who want to know what Izzat is all about, I put myself forward as the bali ka bakra. I have rewatched it, and I can safely assure you that despite presence of said library and said bibliophilic conversation (not to mention presence of dishy Dharmendra and gorgeous Tanuja), this is not—emphatically not—a film you want to watch. Unless you’re a Jayalalitha fan (this was her sole Hindi film). Or you love the Himalayas so much you will watch anything as long as there are plenty of snowcapped peaks and deodar woods and bubbling streams.

Izzat begins with Shekhar (a dark-skinned Dharmendra) giving a lecture to protesting fellow students at his college [no, they’re not protesting against Shekhar; what their grievances are, it’s unclear, but Shekhar is trying to—with some sanctimonious bhaashan-baazi—get them to calm down and listen]. Principal Sahib (Brahm Bhardwaj) is grateful to Shekhar for his help.

Later, leaving college (it’s the end of term and year and college life), Shekhar’s friends try to persuade him to come with them, but Shekhar refuses. He has to go back to his mother.

… but when Shekhar arrives at his home in Dipalpur, it is to find that Mum is dead. After much howling and mourning, Shekhar cremates her. Later, when he’s wandering about listlessly in church, Father Ibrahim (Manmohan Krishna) comes by to console Shekhar, and to tell him the truth about his, Shekhar’s, birth.

It turns out that Shekhar’s mother, Saanwli, was an Adivasi girl who had been seduced by the Thakur of Ramgarh, Thakur Pratap Singh (Balraj Sahni). Saanwli discovered that she was pregnant and pleaded with Thakur Pratap Singh to marry her. Not even in front of all his people, if he was so reluctant. Just a little pinch of sindoor in the parting of her hair, in front of the idol of the Adivasis’ goddess.

Thakur Pratap Singh was still dilly-dallying when one of his men, Manglu (Tiwari), also an Adivasi, turned up. Saanwali slipped away before Manglu could see her, but Manglu, seeing the Thakur at the temple, was very approving: nobody ever left the temple without being blessed by this devi. Look at Manglu himself; Manglu prayed that he should be able to marry the woman he loved, and now his wedding has been fixed with her! 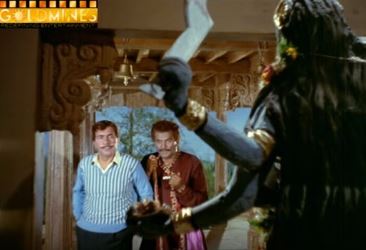 And, oh, yes. Thakur Sahib is being summoned home. In connection with the fixing of his marriage.

And Thakur Sahib went off without a qualm, leaving a shattered Saanwli to go and attempt suicide. Fortunately for her, Father Ibrahim happened to see her, rescue her, take her home—and generally ensure that she stayed alive and well. [How he managed to keep her single motherhood a secret in a community of busybodies is a mystery which is conveniently skipped over].

By the end of this narrative, Shekhar is frothing at the mouth and vowing to have his revenge on the Thakur. He goes off, before Father Ibrahim can stop him, to the Thakur’s palace in Ramgarh.

While Father Ibrahim hurriedly accosts a local chela called Mahesh (Mehmood) and sends him off in Shekhar’s wake, Shekhar arrives at the palace—right in the middle of the birthday party of the Thakur’s daughter, Neelu (? No idea who this actress is). Everybody around treats Shekhar with affection (if they’re wealthy) or with deference (if they’re poor servants) and Neelu refers to him as Dilip Bhaiya. Shekhar is [no surprise, this] also badgered into a singing a song and takes advantage of the opportunity to indulge in some mud-slinging against wolves in sheep’s clothing. 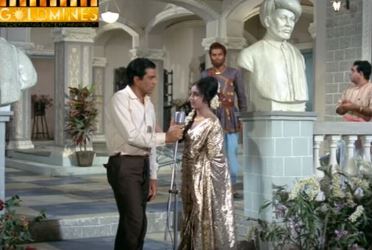 As it turns out, Thakur Sahib is not present; he arrives late, and Shekhar manages to hide from him. Later, still thinking this is Dilip Bhaiya, Neelu sends Shekhar up to Dilip’s room, and follows soon after, to tuck him into bed and generally be bossy little sister. Which makes Shekhar tear up a bit, though stoic that he is, he doesn’t let Neelu see this.

Even later that night, Shekhar sneaks into Thakur Sahib’s room, with a view to exacting his revenge—or something. He knocks over a sword hanging on a wall, the resulting clang brings everybody racing, and Shekhar narrowly escapes detection by hiding. But this puts him off trying any more such  shenanigans, so the next morning, he leaves the Thakur’s home before anybody is up and about.

One, Shekhar is accosted by an Adivasi female named Jhumki (Jayalalitha, dressed like no Adivasi woman I’ve ever seen in the Himalayas). Jhumki goes all out flirting with Shekhar, and only when she’s finished her singing does her chatter stop long enough for Shekhar to realize that Jhumki has mistaken him for another [with whom, fortunately, her love affair does not appear to be one-sided].

Second, Shekhar meets the object of Jhumki’s love: Dilip (also Dharmendra, minus the blackface). As Shekhar already knows—from his reception at the Thakur’s home, and from the photo he had seen hanging up in Dilip’s room— the scion of the Thakur is the spitting image, barring the complexion, of Shekhar himself. Shekhar is walking down the road when he runs into Dilip, and Dilip is pretty astounded to meet someone who’s an almost-replica of him. [Dilip is also not acute enough to wonder why this might be so; he’s probably grown up watching films like Hum Dono and imagines that it’s far too common for completely unrelated people to look and speak exactly the same way].

Several things now happen in quick succession. Shekhar, having realized that Jhumki is in love with Dilip (and Jhumki firmly believes that Dilip loves her too), jumps to the conclusion that Dilip—son of a no-good father that he is—is toying with the Adivasi girl and will discard her like an old shoe once he’s had his fun. As it is, Shekhar has realized, too, that Dilip is a bit of a wimp and will not stand up to his father.

So Shekhar decides to take it upon himself to ensure Dilip marries Jhumki. To do this, Shekhar must be on the spot; so he goes to meet Dilip, and Dilip—who’s hit it off with Shekhar from the start—writes him a letter of recommendation, that will get Shekhar a job with the Thakur’s estate office.

Then, the Thakur (who runs into Shekhar at the office, and is flummoxed but does not seem to make the obvious connection), gets on Dilip’s case: he must go and meet the girl with whom Thakur Sahib has fixed his match. Dilip, despite his spineless attitude, is devoted enough to Jhumki to balk at the thought of marrying another. He therefore approaches Shekhar with a request for a favour: will Shekhar, pretending to be Dilip, go and meet the girl? [This sounds to me like a bad idea, with all sorts of possible complications imminent, but neither of the two men seem to realize the inherent danger in it].

So Shekhar, pretending to be Dilip, arrives at the home of Deepa (a radiant Tanuja). Her parents (David and Lalita Pawar) are already approving (the Thakur’s wealth has ensured that), and a few brief conversations later, Shekhar and Deepa are in love too. 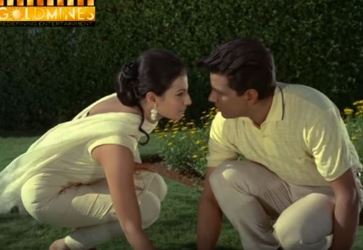 But where will this love go? Even though Shekhar soon confesses the truth to Deepa—that he isn’t Dilip, but Shekhar—is there any hope for them?

This is going to be quick. Dharmendra and Tanuja from the eye candy aspect of it. Dharmendra’s acting, which is convincing as two very different men, the brooding and cynical half-Adivasi Shekhar and his privileged, cheerful, oblivious half-brother. And Yeh dil tum bin kahin lagta nahin.

Oh, so much. The music (Laxmikant-Pyarelal’s) is nothing to write home about, barring Yeh dil tum bin kahin lagta nahin and—to some extent—Jaagi badan mein jwaala). There are, too, just far too many songs. When the songs aren’t good, that really comes in the way of appreciating the story.

… and, when the story isn’t well-written, the entire experience suffers. The problem with Izzat is that while its core premise is good, the way it plays out is predictable and melodramatic and with far too little attention being paid to character development and the development of relationships. How do Shekhar and Deepa fall in love? How does Shekhar’s anger at his illegitimate father turn into something different? What are the dynamics between the two brothers? Between the father and the son he hasn’t known about all these years? How do those dynamics change?

All of which could have, if skillfully handled, have resulted in a sensitive, emotional film about relationships, about human nature and more.

Instead, what we have is a mess. Nothing is ever explored deeply enough to be either satisfying or convincing. Songs and an irritating comic side plot (involving Mehmood, Laxmi Chhaya and Mukri) take away huge chunks of time that would have been better devoted to the development of the central story.

The end, too, is weak: it comes too suddenly, too conveniently, to work.

And, the casting is basically one big waste of great talent. Balraj Sahni has very little to do except right at the end. Tanuja, so lovely and such a good actress too, is barely there. And why on earth would you cast the mother-in-law of all mothers-in-law, dear old Lalita Pawar herself, as the mother of a woman who falls in love with an illegitimate half-Adivasi if said mother is never shown being faced with the realization of who her prospective son-in-law is? If Deepa’s mother is only there to welcome Dilip/Shekhar into her home and reassure her husband that it doesn’t matter if their future son-in-law is dark (as long as he’s wealthy and khaandaani)—the role could’ve been played by just about any older actress. It didn’t need Lalita Pawar.

Give this one a miss.