When I watched the 1949 Nishaan last week on Youtube, the topmost recommendation in the side panel was what was billed as another copy of the same film. Just for the heck of it, I clicked on the link, and arrived at a completely different film: Nishaan, yes; but a Nishaan made 16 years after the 1949 one, and a Nishaan too which is important for one major reason: it marks Sanjeev Kumar’s debut in a lead role (and that too a double role).

Sanjeev Kumar had already played small parts in two films—Hum Hindustani and Aao Pyaar Karein, but this film, with ‘Introducing Sanjeev Kumar’, was his first big role(s). He didn’t soar to success immediately, and most of his films over the next couple of years were fairly forgettable (as Nishaan is, to some extent). But despite the general unimpressiveness of this film, what stands out is the very natural acting of its leading man. 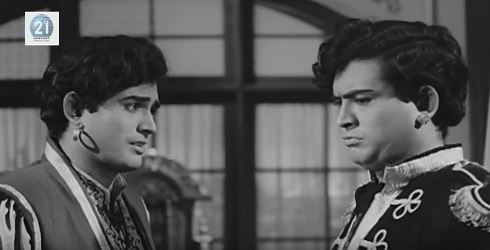 The film begins in a way very similar to that of the 1949 Nishaan: with the birth of two princes, identical twins. The Maharaja of Ajitgarh, however, brings out only one of his babies to be presented to the public and proclaimed the heir. When the baby (named Kiran) has been taken indoors by a maid, the Maharaja summons his faithful servant Sangram Singh (Sheikh Mukhtar) and discloses a fact which even the exhausted Maharani is unaware of: the presence of Kiran’s twin. 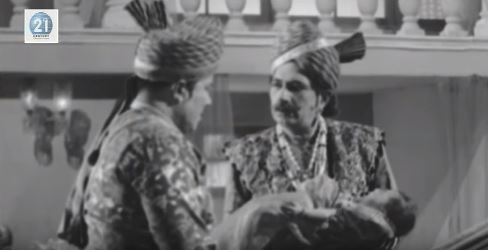 The Maharaja’s motive is soon revealed; he has seen the bloody wars that break out between siblings over thrones and succession, and he doesn’t want that to be the fate of his children. Let Kiran rule on as Maharaja when it is his turn to ascend the throne; let his brother remain in safe obscurity.

Sangram Singh has no choice but to obey. He takes the baby away (the Maharaja, as they’re leaving, names the baby Badal, because just then, thunder booms from the lowering clouds above).This also prompts the Maharaja to give Sangram Singh one parting platitude: Don’t let the badal (‘cloud’) overshadow the kiran (‘ray of light’). Let them remain forever apart.

Maybe so, but Sangram Singh goes to his new jagir in Devpur and immediately brands little Badal with the symbol of the ruling dynasty of Ajitgarh. Someday it may come in use. [You can bet things will work out so that it does]. 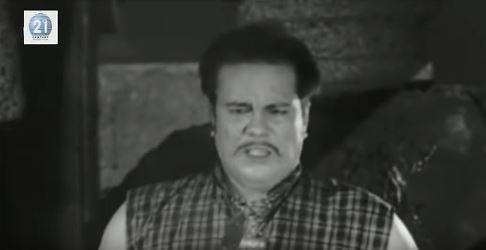 Meanwhile, the Maharaja’s brother, Man Singh (Hira Lal) has come griping and complaining to the Maharaja [with good reason: Devpur was his jagir, and now it’s been rudely snatched away]. Years pass with him still griping, and the Maharaja dies. On his deathbed, he summons Man Singh and appoints him regent until Kiran (now about ten years old) can become Maharaja. 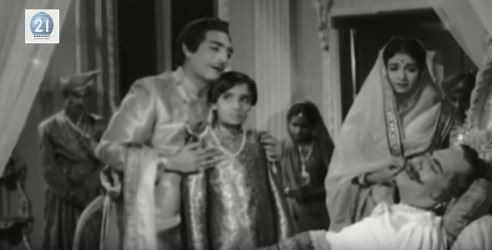 After the Maharaja’s death, Man Singh immediately gets down to reclaiming his lost estate. Sangram Singh, Badal (who firmly believes that Sangram Singh is his father), and their band of servitors, are ousted from Devpur and take to a nomadic life. Sangram Singh soon becomes renowned as ‘Daaku Sangram Singh’, but the reality is that he is more a Robin Hood than a Raaka. 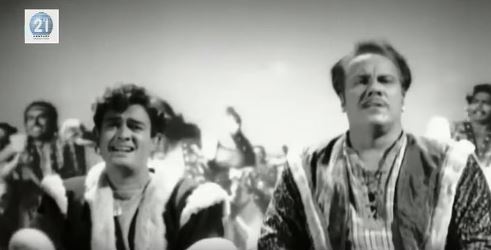 … and it is as a Robin Hood-like do-gooder that Badal (now grown up to be Sanjeev Kumar) happens to meet Princess Padma (Nazima), who is going with her mother (Sulochana) and a maid (Shammi) to Ajitgarh to be married to Kiran. Padma, good girl that she is, has never seen Kiran, and neither have any of the people she’s travelling with, in her carriage with its outlying riders.

What none of Padma’s entourage know is that Kiran (also Sanjeev Kumar), her betrothed, is a drunk who is completely besotted by a beauty named Ratna (Helen). 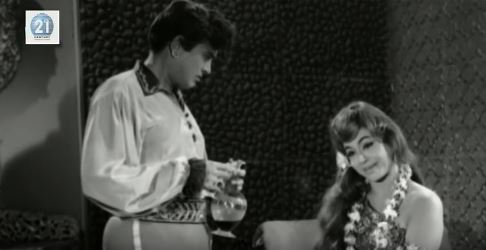 Ratna discovers that Kiran is supposed to marry Padma, who will arrive in time for Kiran’s coronation, which will also be the occasion for the Kiran-Padma wedding. This of course is unacceptable to Ratna, so she pays a goon, Vikram (Prem Chopra) to deflect Padma and stop her coming to Ajitgarh.

Vikram carries out his mission along with a bunch of his henchmen; they attack Padma’s entourage and he delivers a warning to Padma: Go back home, and don’t come to Ajitgarh again. Which, to me, seems pretty chivalrous—in most other films, this man would’ve leered at the pretty princess and carried her off. 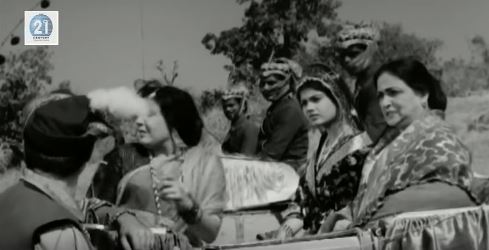 Anyway, in response to Padma & Co.’s panicked screaming, arrive Badal and his man Friday, Machhinder  Nath ‘Maachhi’ (Mukri). They beat off the goons, rescue princess and party, and are thanked most warmly. Padma and her mother also insist that Badal accompany them to the Rajmahal at Ajitgarh: after all, what if they should be attacked again? Badal tries to fob them off, but they won’t take no for an answer. 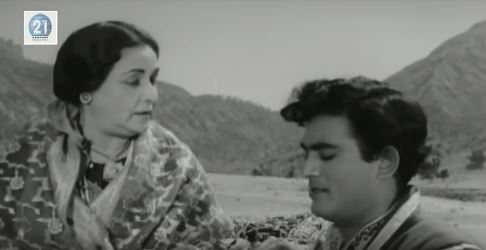 … with the result that an all-unaware Badal arrives at the Rajmahal in Ajitgarh, and is mistaken (understandably) by all and sundry, including the Maharani (Ratnamala) and Man Singh, for Kiran. They scold him playfully for having hidden his identity from Padma, and the poor man isn’t allowed to get a word in edgeways, to say he’s not Kiran at all.

Things move quickly; Badal, now believed by all (except poor Maachhi, who hasn’t been allowed in to the palace gates) to be Kiran, is admired by all. For his bravery in defending Padma; for being good and upright. For refusing liquor (which, everybody knows, Kiran is so fond of). The Maharani is very relieved that her son seems to have turned over a new leaf.

And Padma herself is delighted [and possibly relieved too]: the man she’s been so attracted to, also turns out to be the man she’s supposed to marry! Oh, good. 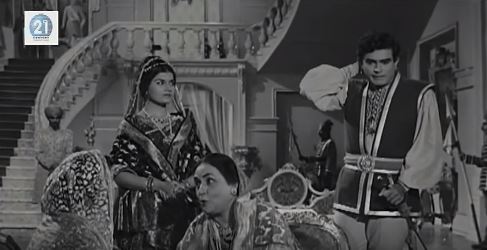 In the meantime, Badal, entering Kiran’s bedchamber, finds its rightful occupant there, asleep in a drunken stupor. Badal now realizes why everybody has been mistaking him for this man.

As it happens, Kiran soon wakes up, and meets his double. Badal explains that he’s Sangram Singh’s son, and Kiran, while befuddled and bemused at the way God has given two unrelated men the same face, ends up taking this in his stride. 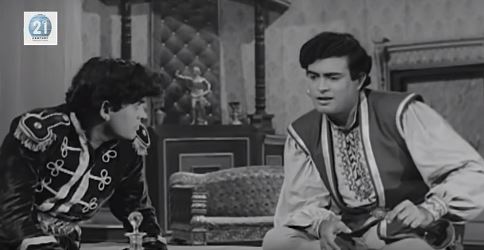 Soon enough, Kiran’s lover, Ratna, arrives, and Kiran is able to get Badal hidden behind an ornate throne before she can spot him. From the conversation between the two lovers, Badal figures out that Kiran, far from being a good husband to Padma, is likely to be an adulterer—if he marries the princess, that is. Kiran is pretty much saying that to a miffed Ratna, who’s accusing him of sucking up to another woman. 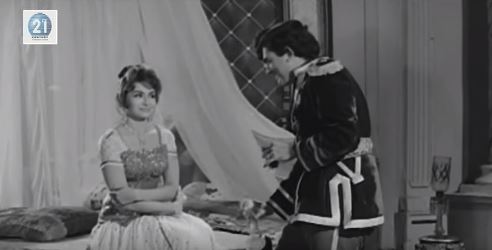 Ratna soon goes off to a shikargah (hunting lodge), using a hidden doorway to a tunnel. Kiran, instructing Badal to pretend to be him—Kiran—also goes off in her wake. Indefinitely.

And Badal, left impersonating Kiran, sets about romancing Padma, granting a royal pardon to Sangram Singh (to whom he returns the jagir of Ajitgarh, too), and basically being the hero.

But how long will this last? Man Singh, after all, is not one to quietly hand over the kingdom to another. He’s been regent long enough to love the power the position commands, and he doesn’t relish the idea of giving that up. Not to a pretender, and not to a drunk. 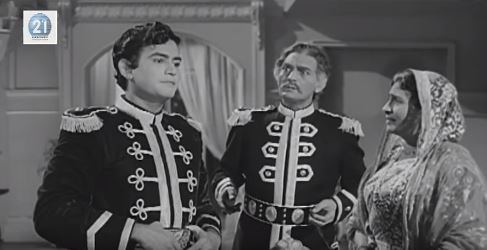 Plus, there are the problems that crop up between Kiran and Badal themselves. After all, they are twins, and therefore with an equal right to the throne. And yet, they’re like chalk and cheese—they couldn’t be more different.  Who will get to be king?

I began watching Nishaan with no idea of what it was all about. Five minutes into the film, and I began to think it was a remake of the 1949 Nishaan.  But it isn’t, even though both films are about twin brothers, both heirs to a throne, and neither very kindly disposed towards the other. There is also the common enemy and the pretty lady, but in this case, there are other complications. Many other complications.

Sanjeev Kumar. For someone debuting in a leading role, he is really pretty good as an actor. The fact that he’s in a double role, as two very different men—one louche and drunk most of the time, nasty and selfish the rest; the other brave, good, but also hot-headed and more ‘hero’-like—helps showcase his acting skills even more. 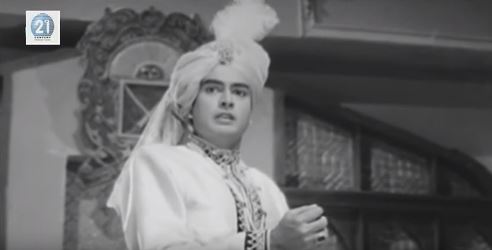 Haaye tabassum tera. Usha Khanna composed the music for Nishaan, and this song stands out as the finest. Aapki adaaon pe fida is good too, but for me its merit is reduced significantly by the fact that it’s a fairly blatant copy of Baby elephant walk.

The too many complications in the plot. The first hour or so of Nishaana is fairly straightforward, but beyond that it starts to get too convoluted to be able to keep up with developments. There is a forced comic side plot involving Shammi’s character and her two ardent suitors; and too little time is spent in developing the characters of Badal and Kiran. Kiran comes across as too black and Badal as too white, but that’s about it.

Then, there are the sudden changes in people’s outlook. For example, there’s a scene in which Badal breaks down and tells Sangram Singh that he’s got sick of constantly looking out for Kiran. Why should he always be the one to put himself at risk, why should he be the one to sacrifice his love for Padma, why should he be warding off the dangers that threaten that no-good Kiran? A fine bit of a dialogue, and a believable emotion, which makes Badal seem more three-dimensional: but the problem is that it’s standalone. There’s no real build-up of that emotion (though one can see, if one’s been following Badal’s story till now, that he has a point). It’s not as if he’s shown any signs, previously, of resenting what he’s having to do. This comes as a bolt out of the blue, and so sticks out like a sore thumb. Later in the film there’s another sudden change in attitude which beggars belief.

Not a great film, but if you like Sanjeev Kumar, this one’s worth a watch just for him. And he looks so good, too!

(Note: This copy of Nishaan, on Youtube, was the one I watched, and I’m pretty sure it has some of the reels mixed up—unless the editor was really bad. If you can, try looking for another copy).