The Hindi film industry has always been an upholder of patriarchy. Its male stars attract ridiculously high prices in comparison to their female colleagues, and have disproportionately longer careers than them (plus a much longer time as leads). Sexism is rampant, ranging all the way from sexual discrimination to violence. And, though more women directors, scriptwriters, lyricists etc are around now, it’s still pretty much a male-dominated industry.

Hardly surprising, then, that most of our films tend to look at things (at best) from a male point of view. At worst, they uphold patriarchy in its most virulent forms, reducing women to a cypher, expected to devote their lives to the service of men. Ever-forgiving Sati Savitris, wrapped in saris and simpering prettily every time their lord and master deigns to be kind. Or unkind, it doesn’t matter; he is still her devta.

Doli is one such film, steeped in patriarchy and regressive in the extreme.

It begins in a college, where Amar (Rajesh Khanna) and Prem (Prem Chopra) have just graduated. Amar is the star athlete, Prem the star pupil who has topped the college and won a scholarship for higher studies in America. Later, in their dorm, both Prem and Amar receive letters from home, informing them that their weddings have been fixed. On the same day, in the same town, Nasik. Neither of them is happy about this, but Prem, having known already that a match had been found for him, is rather more resigned.

END_OF_DOCUMENT_TOKEN_TO_BE_REPLACED

When I watched the 1949 Nishaan last week on Youtube, the topmost recommendation in the side panel was what was billed as another copy of the same film. Just for the heck of it, I clicked on the link, and arrived at a completely different film: Nishaan, yes; but a Nishaan made 16 years after the 1949 one, and a Nishaan too which is important for one major reason: it marks Sanjeev Kumar’s debut in a lead role (and that too a double role).

Sanjeev Kumar had already played small parts in two films—Hum Hindustani and Aao Pyaar Karein, but this film, with ‘Introducing Sanjeev Kumar’, was his first big role(s). He didn’t soar to success immediately, and most of his films over the next couple of years were fairly forgettable (as Nishaan is, to some extent). But despite the general unimpressiveness of this film, what stands out is the very natural acting of its leading man.

END_OF_DOCUMENT_TOKEN_TO_BE_REPLACED

Rajendra Kumar is one of those actors whom I’ve repeatedly mentioned as ‘not being one of my favourites’. Saira Banu, beyond her first few films (notably, Junglee and Shaadi), I find too shrill for my liking. Despite the fact that these two star in Jhuk Gaya Aasmaan, it remains one film I like a good deal—because it has such an unusual story.

A story to which there’s a brief nod in the first scene. Sanjay (Rajendra Kumar) and Priya (Saira Banu) meet in what looks like an obviously ‘indoor set’ representation of a cliff. There’s a little banter, she insisting that he’s irritating her with his wooing, he professing his love for her and asserting that he could do anything for her—even give up his life. Priya eggs him on: yes, please. Go ahead. Show us.

END_OF_DOCUMENT_TOKEN_TO_BE_REPLACED

Permit me one last Sadhana-related post before I put aside my unexpected (even to me) sadness at her untimely death. I know I’ve already been through two tribute posts, but even as I was writing those posts, I couldn’t help but think of the Sadhana films I haven’t reviewed on this blog (and there are several of them, including all the ones she made with Rajendra Kumar). When I think of Sadhana, I always think of her in Raj Khosla’s suspense films. Three of them, two opposite Manoj Kumar (Woh Kaun Thi? and Anita), and this one, opposite Sunil Dutt, with whom Sadhana also starred in Gaban and Waqt.

END_OF_DOCUMENT_TOKEN_TO_BE_REPLACED

One thing that has long puzzled me is Bollywood’s reluctance to do real life stories. Where Hollywood has created films on the lives of people ranging from Napoleon’s one-time fiancée to an obscure British missionary in China, we have, to show for years of fascinating history… Shahjehan and Changez Khan, both so badly warped that they bear little resemblance to fact. Dr Kotnis ki Amar Kahani is a refreshingly unusual film in being relatively accurate, as well as entertaining—but a flash in the pan.

Our generally avid enthusiasm for the freedom movement and its exponents gave me hope that Shaheed, the story of Bhagat Singh, might be worth a watch. This, after all, was the young man who inspired an entire slew of films, beginning with (or so Wikipedia would have us believe) a film in 1954, followed by a 1963 film starring Shammi Kapoor, and this one: the first of Manoj Kumar’s many patriotic films. There have been later films—2002, for instance, saw two films, one a superb one starring Ajay Devgan and the other with Bobby Deol as Bhagat Singh—but Shaheed was the first major Bhagat Singh story.

END_OF_DOCUMENT_TOKEN_TO_BE_REPLACED 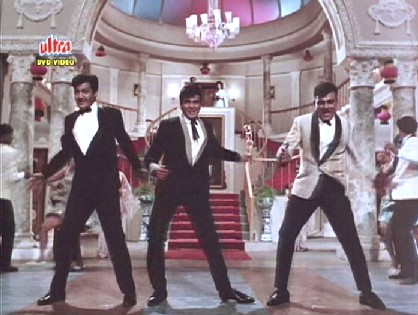