Just ten days ago, this blog celebrated the birth centenary of an actor who pretty much came to exemplify the ‘Hindi film villain’ of the 50s and 60s: the inimitable Pran. Today, it’s time to celebrate the birth centenary of another actor who carved such a niche for himself that his name became nearly synonymous with a particular kind of role. Iftekhar, who brought so much dignity and intelligence to his usual role of police officer or lawyer—or army officer, or doctor…

Born on February 22, 1920 in Jalandhar as Sayeedana Iftekhar Ahmed Shareef, ‘Iftekhar’, as he came to be known, originally entered the world of cinema as an aspiring singer. His audition in Calcutta impressed the composer Kamal Dasgupta so much that he suggested Iftekhar’s name as an actor. Iftekhar eventually moved to Bombay, debuting in Taqraar (1944) and going on, over the next several decades, to work in some four hundred (?) films. In most, he was the cop, the public prosecutor, sometimes the doctor: all roles that called for a certain dignity, a gravitas that Iftekhar did complete justice to.

But he could also play vastly different roles too: in Deewaar (1975) he played the suave and very wealthy criminal; the nasty side-kick in Pyaar ka Mausam; the lecherous Thakur in Teesri Kasam,  and more. Interestingly, though it’s not well-known, Iftekhar was one of the rare Indian actors of his generation whose spoken English was so natural that he fitted well into English-language works too. He acted, for instance, in the Dev Anand-starrer The Evil Within (1970), as well as the 1967 TV series Maya. I have seen him in the Tad Danielewski-directed The Guide, and can vouch for him: his diction was by far the best in the cast.

To choose an Iftekhar film to review was a tough task. My favourite film of his, the one which has him in possibly his best role from before 1970, is Ittefaq—and I’d reviewed that years back. So I picked a film which showcases another talent of Iftekhar too. More about what that is, later in this post. For now, a brief synopsis of Door Gagan ki Chhaaon Mein.

The story begins in a village, where Ramu (Amit Ganguly, Kishore Kumar’s son in real life too) goes every day to the riverbank along with his dog to look out for his father. Shankar (Kishore Kumar) is a soldier who’d gone off to war, and now that the war is over, Ramu waits expectantly to have his father home. 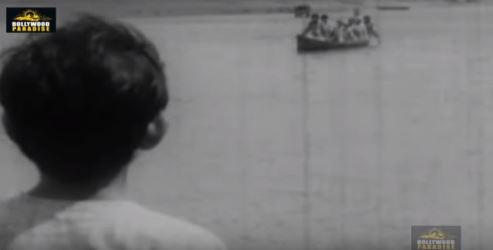 One day, Shankar does return, a happy and relieved man, glad to be finally back home again. But he’s shattered when he discovers that the home he knew is gone: the house caught fire and burnt down, killing both Shankar’s father and wife. Ramu, who escaped, witnessed the fire and saw his grandfather and mother die—a traumatic episode which has rendered him mute ever since.

Shankar, after some unsuccessful attempts at encouraging Ramu to speak, decides there’s only one thing to be done: he will take Ramu to the city. He will go to every doctor he can, and find a cure for Ramu. He will make sure Ramu’s voice returns. 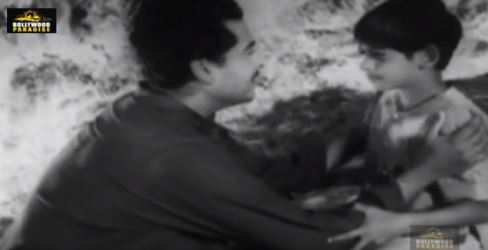 So, leaving his fields in the care of the old neighbour who’s been looking after them (and after Ramu) all these past months, Shankar sets off, with Ramu and the dog.

They stop to rest at one place, and Shankar tells Ramu to wait beside the road while he (Shankar) goes downhill a little to a stream to fetch some water. Ramu, left by himself, climbs up a pile of logs lying beside the road—and the logs roll down, blocking the road. Just then, a cart comes trundling along. In it are three men: the Thakur (Raj Mehra) and his two ne’er do well sons, the elder one Jagga (Iftekhar) and the younger one (Sajjan).

Jagga, hot-tempered and belligerent, immediately gets off the cart and comes to Ramu, raging at him for having blocked their way. And why doesn’t the boy speak, he shouts. Is he mute?

Shankar, having heard the ruckus, comes running up and confronts Jagga. Jagga’s father and brother, from the cart, encourage Jagga to let Shankar know who’s boss here. Jagga hits—and Shankar hits back, but just when it seems Shankar is going to get the better of him, Jagga comes up behind Shankar and whacks him one on the head, felling Shankar.

The Thakur and his sons quickly decamp, and a terrified Ramu goes racing for help. The first person he finds is Meera (Supriya Choudhary), who is going by in a cart. Meera is a kind and gentle soul, the orphaned daughter of a once-wealthy zamindar family. She still has some land, which a faithful servant looks after, and there is her old nanny/maidservant, Jamuna Kaki (Leela Misra) at home. Meera and her servant follow Ramu to the still-unconscious Shankar, and they take him back to Meera’s home.

Here, attended to by the local doctor (Moni Chatterjee), Shankar soon regains consciousness. He is grateful to Meera, but is eager to rush off and have Ramu cured. The doctor, however, stops him: Shankar was badly hurt, he cannot move around right now. Stay a while longer here, suggests the doctor, and when you’re well, you can go.

While Shankar recuperates in Meera’s house, things happen. For one, Meera and Ramu quickly grow close to each other. Very soon, she’s feeding him his meals, helping him bathe, singing lullabies to him, and just generally doing everything you wouldn’t expect the mother of such a big child to do (but which Hindi cinema, in its blasé disregard of reality, persists in regarding as maternal duties).

Shankar, obviously, being Ramu’s father, is not oblivious to any of this. When he’s a bit better, he starts doing small tasks around the place—fixing the broken-down old tractor on Meera’s farm, for one. He is also sensitive enough to notice that Meera is not oblivious to him. Jamuna Kaki and the other servant are all for Meera getting married to Shankar and Jamuna Kaki is blunt enough to say so, too, but Shankar deliberately ignores the hints he’s getting.

The fact that Shankar is staying in Meera’s house has not gone unnoticed; the Thakur and his two sons know it, and Jagga, especially, is thoroughly incensed. Meera is going to be his wife, he says; how dare Shankar come and try and encroach? (Jagga quite obviously loves Meera’s wealth and her fields more than he loves her, but this doesn’t matter to him. It still makes him very possessive about Meera).

But all Shankar wants is to take Ramu to the city, to get his voice back… will that happen? Or has Ramu’s voice gone forever? And what of lonely Meera, who, having had a glimpse of what it could be to have a family of her own, and must now see Shankar and Ramu go away, perhaps forever? What of Jagga, who grows more and more irate and impatient with each passing day?

Iftekhar plays a very different character here from most of his roles. Jagga isn’t the small-time crook who appears briefly, as one of the gang in films like Pyaar ka Mausam or Night Club. This isn’t a blink-and-you’ll-miss-it role. Jagga is an important character, and a nasty one: he does all the things that Iftekhar’s characters invariably arrested people for in other films! He beats up people, tries to force himself on a woman, hits a child, and even attempts murder. 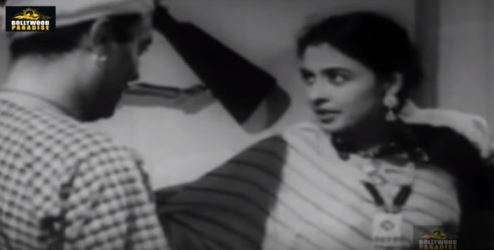 And, in the process, Iftekhar shows how well he could act. Not just as the law-abiding citizen, but as the law-breaking one too.

The overall simplicity of the story. I sometimes like my stories to be uncluttered and straightforward—and Door Gagan ki Chhaaon Mein is an example of that type of plot. No convoluted and long-drawn complications, no dozens of characters getting in the way, no comic side plot to distract one from the main theme.

Then, the music, which (like the production and the direction) was by Kishore Kumar himself, with lyrics by Shailendra. The title song is lovely, but among the other songs I loved was the credits song, sung by Hemant; and the famous Koi lauta de mere beete hue din.

And, last but by no means least, the paintings that form a backdrop for the credits. These were painted by none other than Iftekhar himself; he was a very talented artist, who had initially trained in art before his career got diverted into cinema. I have no idea if any of his other paintings ever featured in cinema, but it’s interesting to note that he acted (in a cameo) as an artist in Professor, and one of the major clues his character unearths in Ittefaq is from an artist’s palette.

The somewhat unconvincing romance. True, Door Gagan ki Chhaaon Mein is more about the relationship (which is pretty one-dimensional) between Shankar and Ramu, but even so: if a romance is written into the plot, I would have liked it to be more believable. Here, the love between Shankar and Meera is only hinted at, and it finally comes across as more of a way of giving Meera a son and Ramu a mother than anything else.

But, still: not a bad film. And Iftekhar is fun to watch doing all the things a baddie should.