I have to admit that I watched this film against all advice. Anu had watched it a couple of years back (and had written up a review of it); but I—remembering a long-ago viewing of Hum Sab Chor Hain, which I’d enjoyed immensely—decided to give it a try anyway.

And, it seems the version I got to watch, while as incoherent in the second half as the one that Anu saw, at least had some more parts intact. The main problem, from what I could see, was that—possibly in transferring the film from celluloid to digital—the reels got mixed up, with one of the reels that should’ve come early in the film ending up later, thus making things very confusing. Despite that (and despite some shameful editing in the last half-hour by the video production company), this evoked one reaction in me: If only this could’ve been available in the original version. Because, if you try to fit the pieces together and imagine what might have been in the bits so summarily chopped off, you can see the outline of what must have been a pretty funny and entertaining film.

END_OF_DOCUMENT_TOKEN_TO_BE_REPLACED

Raja, while commenting on my post on saheli songs, mentioned that Akhiyaan bhool gayi hain sona from Goonj Uthi Shehnai was his “all-time favourite”, and “In my list of 1-10, I’d fill all 10 spots with this song.” I’ve had the VCD of this film lying around at home for quite a while, but I’d been putting off watching it (largely because Rajendra Kumar isn’t one of my favourites), but after I had a closer look [hear?] at the songs of Goonj Uthi Shehnai—and realized that some of my favourite songs were from this film—I figured I had to watch it soon.

This post, therefore, is for Raja. For having spurred me on to watch this film. And yes, I think Akhiyaan bhool gayi hain sona is pretty awesome too.

END_OF_DOCUMENT_TOKEN_TO_BE_REPLACED

If Rajkumar is the trademark ‘Shammi Kapoor at his peak’ film, then Tumsa Nahin Dekha is an equally – if not more – important film, because this is the one that made Shammi Kapoor into the icon he was by the mid-60s. Till Nasir Hussain got Shammi Kapoor to shave off his moustache and act as the devil-may-care hero of this film, Shammi was (as my father puts it), “Just another actor with a thin moustache and the usual roles. Nothing exceptional.” Tumsa Nahin Dekha gave him the opportunity to transform from the half-hearted, unexceptional sort-of-hero into a Shammi Kapoor who became almost an institution in himself. 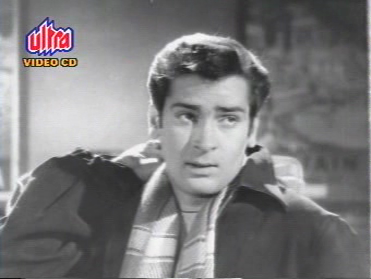 END_OF_DOCUMENT_TOKEN_TO_BE_REPLACED

I’ve been very busy the last couple of days, and the busy-ness doesn’t look like it’ll come to an end soon. My husband, therefore (and what a model of husbandly devotion!) offered to write the review of Abe-Hayat for me. This, mind you, without having seen the film, just on the basis of a very sketchy gist I’d narrated of the first half while we were on our evening walk. Tarun said he’d do a 3-sentence review:
Once there was an evil jaadugar named Saamri. There was a prince, and a princess. The prince killed Saamri, and then he and the princess lived happily ever after.

END_OF_DOCUMENT_TOKEN_TO_BE_REPLACED

Rewatching this film after donkey’s years, I was struck by the similarity in basics with How to Marry a Millionaire. Here too are three beautiful girls, each of whom falls in love with a man she meets—but doesn’t realise is not quite the sort of man she’d hoped to end up marrying.
That’s where the resemblance ends. Our girls, like good bharatiya naaris, aren’t mercenary gold-diggers. Which, of course, is good news for the three men whom they fall for, since their heroes aren’t exactly rolling in wealth either.