A consumptive is told by his doctor that his days are numbered. An orphan who doesn’t even know what his parents looked like, finds himself unwanted. A man who loves a dancer/singer is forbidden by his stern father to marry the girl—and she acquiesces. The man sinks into despondency, alcoholism and debauchery, ending up being blackmailed by a gold-digger with an eye on his wealth.
Meena Kumari. Ashok Kumar. Nasir Hussain.

Tragedy? I’m glad to say no!

Bandish starts off so dismally, my heart sank. Mahendra (Nasir Hussain, an actor who’s especially good at portraying the pathetic old man) is severely consumptive. His doctor, on a visit, examines Mahendra and tells him the sad truth: Mahendra doesn’t have long to live. Mahendra says he’s not worried about himself, he’s worried about a little boy called Tomato (yes, really—that is his name! Daisy Irani), whom Mahendra has looked after, ever since Tomato’s parents died of cholera when he was a few months old. The doctor tells Mahendra that he’d better find another home for Tomato, since, in any case, his disease is so infectious, it could be dangerous for Tomato. 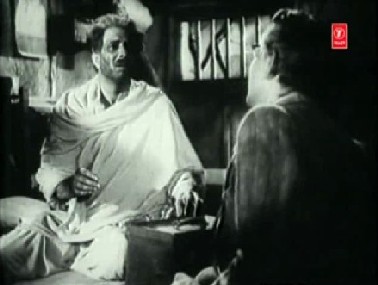 The next day, Mahendra takes Tomato to an orphanage. One look at the rowdy children, and a brief conversation with the man in charge—who’s going berserk, and vehemently insists that Mahendra not admit Tomato to the place—and Mahendra decides Tomato can’t stay at an orphanage. A foster home, with a loving family that will be able to provide for the child: that’s the solution.
So Mahendra takes Tomato to the park, and keeps an eye out for the wealthy people who frequent the place. After mentally rejecting the older, more decrepit, less generous lot, he notices Kamal Roy (Ashok Kumar), who’s just wandered in and sat down with a friend.

Kamal Roy’s past, and some of his present, emerges in his conversation with his friend. A woman called Rita Gupta has managed to produce some photos of Kamal which suggest he’s been rather intimate with her. These photos have been used by Rita and her father to blackmail Kamal’s father. As a result, Kamal’s father is mad at him and has cut off his allowance. Kamal’s in a very dire financial condition—but he is generous enough to give some money to a passing beggar.

This gesture is noticed by Mahendra, who hurriedly tells Tomato that that man (Kamal) is Tomato’s father, whom Tomato has been wanting to go to ever since he can remember. Tomato toddles off to sit beside Kamal (Kamal’s friend has left in the meantime), and Mahendra, after shedding a few silent tears, also leaves.
Kamal is a bit taken aback to find a strange child sitting placidly beside him; but they introduce themselves to each other and soon become friends. The trouble arises when Kamal gets up to go, because Tomato insists that Kamal is Papa.

Kamal tries to shake off the kid, but a crowd gathers, all of them taking Tomato’s side. They decide unanimously that Kamal’s the lowest of lowlife for trying to abandon his own flesh and blood—and when Kamal denies having ever even been married, they jeer at his lack of morals. Eventually, when one of them goes off to call the police, Kamal bundles Tomato into the car, pretends that he’d been pulling everyone’s leg, and goes off.

Kamal spends the rest of his evening trying to shake off the curly-headed limpet. He tries leaving Tomato at a restaurant where he takes the child for a snack. He then takes the kid to his lawyer’s office, with a view to getting some advice on what to do with Tomato. The lawyer suggests taking Tomato to a children’s home—but it’s pretty late by now and the children’s home office will have closed. Kamal now needs to find a place where Tomato can stay for the night. He daren’t take the kid to his own home, because his father will throw a fit.

And then Kamal has a brainwave: Usha Sen! Usha (Meena Kumari) is Kamal’s ex-girlfriend, with whom he’s still very much in love. Usha teaches dance and music, which is why Kamal’s father thinks her something of a pariah. Mr Roy (Bipin Gupta) has therefore forbidden Kamal from marrying Usha. And Usha, in an idiotically old-fashioned manner, has decided that she cannot marry Kamal against the wishes of his parents, so that’s been the end of their romance.

Kamal, ever since, has been going steadily downhill. He’s been drinking heavily and hanging out with the girls—one of whom is the evil Rita Gupta. In flashback, we get the inside story on that: she took advantage of a day when Kamal was very drunk, and positioned him with his head on her lap while an accomplice took photos. Tame, I think, but anyway: Kamal’s name has been mud ever since, and Usha now thinks she was a lucky girl to have been rid of this lecher.

Kamal’s parents have also now fixed up his marriage with Lata (Indira Bansal), the daughter of a wealthy man. Kamal’s his usual suave self, charming Lata till she believes he really wants to marry her.

Usha, too, has given in to parental pressure and is engaged to a moron called Govind (he’s insufferably dumb; nobody should be expected to marry someone like that).

But back to the present: Kamal thinks Usha will be the perfect hostess for poor, friendless, homeless Tomato. He takes the child off to Usha’s house, where she lives with an old aunt. Usha initially boots both Kamal and Tomato out, but when she sees how things really are, she agrees to let Tomato stay the night. What she doesn’t know is that Kamal has told Tomato that he (Tomato) will be staying the night with his ‘Mummy’. She gets a shock when Tomato calls her that, but Tomato’s so cute, she relents and does get a bit maternal. 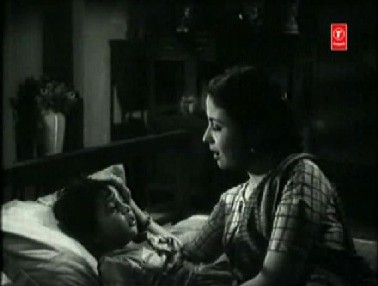 The next morning, Kamal turns up and takes Tomato to the children’s home to get him admitted. He tells them that he (Kamal) is Tomato’s father, but since he’s a widower and is off to Delhi, he needs to leave Tomato at the children’s home. Also, since he won’t be home, he’d like all correspondence to be addressed to a relative of his, called Usha Sen.
Kamal is doing everything he can to ensure Tomato doesn’t come back into his life again. 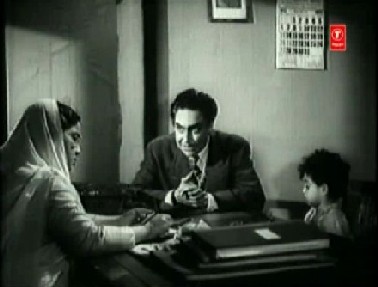 Unfortunately for Kamal, he’s not destined to escape Tomato. Tomato raises hell when he discovers his ‘Papa’ has left him and gone away. In fact, he raises so much hell that the children’s home people, fed up, bring Tomato to Usha’s house (the only address they’ve been given).
And so it goes on, with Kamal desperately trying to shake off Tomato, Tomato clinging on tenaciously, and both Usha and Kamal finding their lives suddenly going haywire because of the presence of this little kid. How will it all work out? (Well, since Tomato’s parents are dead, there’s no way he can go to them in this life, but is there anyone out there who’ll take him under their wing?)

Ashok Kumar, especially in his scenes with Daisy Irani. He is so, so good as a half-irritated, half-affectionate man who wants to shake off this pesky child, but can’t help but also look after the kid. So, even though he’d rather be rid of Tomato, Kamal Roy takes the kid to a restaurant, to the theatre, to the zoo… cuddles him when he’s sleepy, shows him how an aching head should be pressed, and carries him about, tucked under one arm. And, best of all, makes no bones about letting Tomato know how he feels (he invariably addresses Tomato as jonk (leech) or Nadir Shah (after the tyrannical invader who conquered Delhi and other parts of Northern India in 1739)!

The tone of the film. An orphan whom no-one wants is grim, but the film manages to turn it into an adventure in which you know that someone, eventually, will look after Tomato. It may be Usha, it may be Kamal, or it may be someone else: but Tomato will find a home. As it is, in a refreshing departure from the norm, people aren’t cruel to the child: almost everybody, in fact, is solicitous and concerned about Tomato’s welfare.

The cameos! Brahm Bhardwaj appears briefly as an opinionated bystander who chastises Kamal Roy for trying to leave Tomato in the park. Mehmood features in a song, as a boatman; and two of my favourite character actors, Sajjan and Shammi, do a couple of scenes in which they’re absolutely priceless. 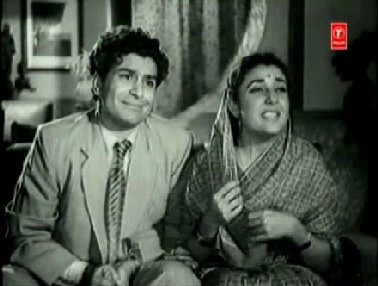 And Meena Kumari. So very beautiful.

Kamal Roy, though funny, and though mostly concerned about Tomato, made me a bit uncomfortable at times. You can’t just leave a kid in a restaurant while you sneak out the back—it would have made my conscience plague me for the rest of my days.

I guess this is actually a manifestation of the film’s biggest failing: its inability to develop character (except perhaps in the case of Usha Sen, and not much there either). In much of the film, characters do inexplicable about-turns for which no reason is ever offered. People who were at each other’s throats suddenly turn very cordial (and for no reason that I can see); people take decisions completely against their professed beliefs and principles; and many people take the most surprising and unlikely incidents completely in their stride—for example, seeing a strange child asleep in a grownup’s bed doesn’t seem to really surprise a close relative who happens to enter the bedroom.

Bandish, I think, could have done with better writing. The pace is good, the twists in the plot are amusing, the acting’s good, but there are holes in the story—sudden and unexplained changes in character, and, at the end of it all, a bunch of plot elements that never got resolved. (I found myself asking space: “But what happened to—? And to—?”)

Still, I can forgive that. This is a fun film, and certainly worth a watch.