The story begins at the home of a wealthy Sheikh (Jayant). His wife Zubeida (Mumtaz Begum) has been noticing that their son Ahmed (Suresh) has been enjoying himself rather too freely with the ladies, and—like any worried mother—writes to her husband, who is away in a desert camp, collecting revenues from his serfs (or whatever they were called in the Middle East about a century ago).

Sheikh Sahib hurries home and is told all about Ahmed sowing his wild oats. Ammi has all the solutions ready, as well. First of all, Ahmed should be sent away on work to take his mind off women.

Secondly (no prizes for guessing)—he should be married.

Begum Sahiba doesn’t merely suggest Ahmed be married off pronto; she even has the bride all picked out. Nadira, the daughter of a dear friend of Sheikh Sahib’s, will suit Ahmed perfectly. Sheikh Sahib puts up a token resistance—what if Ahmed should still not mend his ways?—but is brushed aside. Begum Sahiba is sure it’ll work. Nadira is very pretty. Sheikh Sahib agrees to send word to Nadira’s father, inviting him and his wife for a visit so that the topic may be broached.

In the meantime Ahmed is sent off to collect the rents. Along with him goes his faithful servant/companion/confidant, Jamaal (Maruti). After a hectic day of work, Ahmed decides he would rather go into the nearest kasbah (settlement) and relax a bit there, at the home of his friend Farid (Rajan Haksar). Farid, who seems to be as much a connoisseur of the fleshpots of Egypt as is Ahmed, suggests they go and watch a renowned dancer of the town.

This woman, Yasmin (Vyjyanthimala) turns out to be very beautiful as well as very talented. Ahmed is quite dazzled by her, and she, it’s obvious, has noticed him too.

But one dance isn’t enough. Ahmed isn’t content with that, and having made a quick detour to his camp to dismiss all the tenants—summarily forgiving them their rents—he returns to the kasbah to watch another of Yasmin’s dances. This time, once her dance is over, Ahmed manages to grab a moment alone with Yasmin, and begs her for a date. Yasmin tells him that she’ll meet him at the ruins near where her people are encamped. At night. Ahmed agrees. They do meet that night, and it’s clear that the attraction between these two is very strong.

We skip forward now to some fifteen days later. Ahmed and Yasmin have been meeting regularly, and he is getting a bit restive—he wants more from these meetings (more than what is not specified, but I’m guessing he’s not too satisfied with just holding hands and singing romantic songs). Yasmin, chaste and pure that she is, puts him off. Not yet, she says demurely.

Little do these two lovers know that this is going to become a moot point shortly after. Yasmin’s nightly rendezvous with Ahmed has not gone unnoticed; the slimy Zafar (Shaam), a member of their tribe, has told the chief (SN Banerjee), who is also Yasmin’s father, that his daughter is up to no good. Daddy is displeased; Zafar is equally—if not more—displeased, because he’s had an eye on Yasmin for himself. Let’s break up this romance, they decide.

So one night, along with their henchmen, they attack Yasmin and Ahmed at the ruins where they meet. As luck would have it, Yasmin, snuggling up against her beloved, has been complaining about his pistol digging into her ribs, and Ahmed has dutifully taken off the holster, pistol, ammunition, and all, and put it aside. One of Zafar’s men (Rashid Khan) sneaks up quietly, nabs the holster and goes off with it, neither Yasmin nor Ahmed realizing what he’s done…

… with the result that when Zafar and his men attack, Ahmed is left defenceless. Yasmin is dragged off back to the camp, Ahmed is whipped and thrashed badly. Zafar mocks him: this man, a Sheikh’s son—a prince, no less—has fallen for such an old trick? This tribe of theirs has been using Yasmin and her beauty, her false promises of love, for a long time now to snag unsuspecting Romeos. 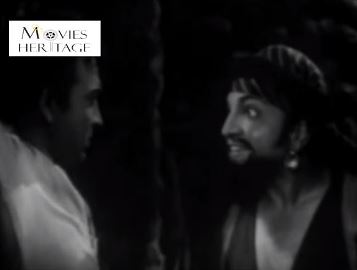 Ahmed is taken in—he probably remembers how Yasmin had complained about his pistol, making him put it away—and in a jiffy, love turns to hate. Zafar and his men string Ahmed up, leaving him there to starve and bleed to death or whatever, guarded only by the puniest of them all.

This allows Ahmed’s faithful servant Jamaal, who’s traced his master here, to come and cut down Ahmed and smuggle him out after gagging and stringing up the lone guard.

The next morning, when Zafar and Co. arrive, the guard tells them the sorry tale. 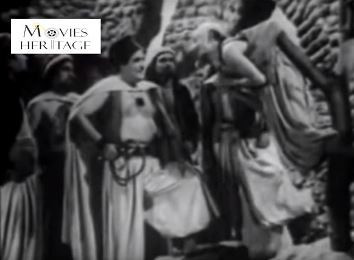 There’s not much they can do about the escaped prisoner now, so Zafar decides to focus on getting Yasmin to agree to marry him. Zafar’s technique—to bully Yasmin, and force her into marrying him—is hardly likely to bear fruit, especially as Yasmin, yet unaware that Ahmed’s mind has been poisoned against her, has now decided to go searching for Ahmed.

Ahmed, not wanting to go home to recuperate (Ammi and Sheikh Sahib will not like the back story behind how Ahmed got hurt), has got Jamaal to take him to Farid’s house instead. Up on the rooftop one day, he hears a song-and-dance performance in the street outside. It’s Yasmin, searching for Ahmed through her song. She sees him, too, and is delighted and relieved. The poor girl is too glad to see him to notice that her beloved is not looking terribly pleased to see her.

This is followed up by Ahmed going to watch her dance at the sort-of club where she performs.

A brawl breaks out here between Ahmed and some other members of the audience (who try to get fresh with Yasmin). Ahmed pulls out his pistol and shoots a couple of them, injuring them, before he grabs Yasmin and runs off with her. Yasmin, of course, is ecstatic to be finally with Ahmed again—until he brings her back to his camp and, flinging her down, tells her just how much he loathes her. And that his sole purpose in life is now to have his revenge on Yasmin for having fooled him so.

Will Yasmin succeed in convincing Ahmed that she really, truly, does love him? Will Ahmed, of his own accord, change his mind? And what of the girl Daddy and Ammi have chosen to be Ahmed’s bride?

Yasmin wasn’t a brilliant film, but it wasn’t terrible either. Mostly, it reminded me of one of those clichéd Mills & Boon romances, where the beautiful heroine is kidnapped by a handsome sheikh and then, thanks to various misunderstandings (invariably engineered by some villain), is given the cold shoulder by the man, whom she’s now head over heels in love with (yes, talk about Stockholm Syndrome). Where Yasmin scores is in that the heroine doesn’t fall in love with her captor; she’s already been in love with this man for a long time—her fault lies only in going on loving him, and in believing that she can convince him of her innocence.

The simplicity of the story. The plot is fairly straightforward, without any comic side plots to distract one’s attention, and without too many twists and turns. The film clocks in at just about two hours (a minute less), but if you remove the half-hour or so of songs (Yasmin has a lot of songs), you’d be left with a—for Hindi cinema—fairly short film, and the story fits it pretty well.

Talking of the songs: yes, the music was one reason I watched this film, and the songs are excellent. My favourites are Bechain nazar betaab jigar, Mujhpe ilzaam-e-bewafaai hai, and Ab woh raatein kahaan ab woh baatein kahaan, but there are several others which are very good too.

Then, Vyjyanthimala and Suresh. I have seen Suresh as leading man in only two other films—Dulari and Satta Bazaar—and he didn’t impress me in either. In Yasmin, however, I was more than impressed: he looks great, and his acting—vis-à-vis Vjyanthimala—is good. The melting way he looks at her, the expressions: very real, somehow. And yes, he and Vyjyanthimala do make for an eye-catching couple.

One last thing that I liked about Yasmin was the unusual period in which it’s set, and how that is portrayed. This is somewhere unspecified but definitely in the Middle East (Egypt, perhaps?) sometime possibly in the early 1900s, or a little earlier. If you miss the details (Ahmed wears a wristwatch and smokes a cigarette, his friend Farid is always seen in a suit, Yasmin’s father sometimes wears coat tails, and there are pistols), you might think it’s set in medieval times, but the very subdued hint of modernity is an interesting departure from the norm. The way the desert and the kasbah and the camp are portrayed is also good: it comes across as fairly real. The ruins were somewhat more obviously a set, but for the rest, a definite thumbs-up from me.

The way Ahmed throws Yasmin around when he suspects her of being nothing more than an enticing lure. He doesn’t hit her, but the way he behaves is—well, not hero-like, at any rate.

But for all that, still a film I pretty much enjoyed watching, if only because it was easy on the eyes and the ears.

Note: Of the three versions of the film currently available on Youtube, the best version as far as picture and sound quality are concerned is the Movies Heritage one. Be warned, though: as you can probably see for yourself from the screenshots in this post, their watermark is very intrusive.