And here we go.

Sharda (Mala Sinha) is the daughter, the only offspring of a very devoted father, the wealthy Mr Dubey [Nasir Hussain, who else? The number of films in which this man played the wealthy father of a girl intent on marrying against his wishes!] Sharda’s mother [an overdressed actress with a handful of reactions, each more OTT than the last] has little to do except pout unhappily while father and daughter coo over each other. 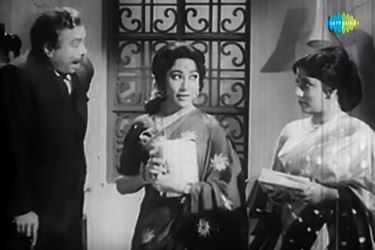 Mr Dubey is the founder of Sharda College, the principal (Gajanan Jagirdar) of which is his good friend Vidya Ratan [whoever was responsible for naming this character had a love for the literal]. Vidya Ratan has been wanting to retire, but Mr Dubey has been putting him off. Just six months more, and Mr Dubey’s old friend’s son, Shankar, will be returning from abroad after higher studies financed by Mr Dubey. He will relieve both of them of their burdens—Vidya Ratan will be able to retire, and Sharda will get married [if I were Sharda and I overheard this conversation, I’d be mighty peeved at being called a burden].

In the meantime, a new professor for the college has been appointed. Vijay Kumar (Guru Dutt, who always strikes me as looking somewhat odd in his cleanshaven avatar) comes in response to the letter, leaving behind his mother [Leela Chitnis. Like Nasir Hussain, fairly predictable as a character: in her case, invariably poverty-stricken as well as grief-stricken]. Along with Maaji is Vijay’s younger sister Uma (Lata Sinha), who works at a factory.

There’s an on-and-off subplot involving Uma and her lover Sukhi Ram (Deven Verma), who is the manager at the factory. Sukhi Ram’s wealthy and very stingy father Dukhi Ram (Om Prakash) will never agree to Uma being his bahu, so Sukhi Ram and his supportive mother (Indira Billi, looking far too young to be playing mother to Deven Verma) hatch a plot, using as main theme the fact that the family driver recently knocked over Uma on the road.

Dukhi Ram is told—by his wife and son—that Uma is crippled as a result of the accident, and that her mother is now contemplating litigation, demanding Rs 1 lakh as compensation, since who will now marry Uma, cripple that she is? 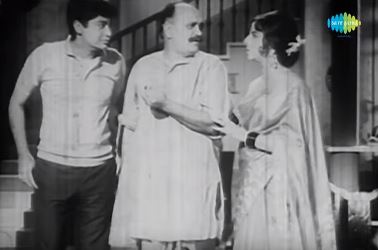 While all of that is happening and Dukhi Ram is having palpitations, Uma’s bhaiya Vijay lands up at Mr Dubey’s home, appointment letter in hand. Mr Dubey was the one who had sent him the letter—Vidya Ratan was away—so Vijay has come here instead of to the college. This gives Sharda and her mother [who come out to gawp shamelessly at him] an opportunity to see him. Once he’s gone, Mr Dubey having told him to report at the college, Sharda teases her father about this new professor: he has no dignity, none of the presence one expects of a professor. 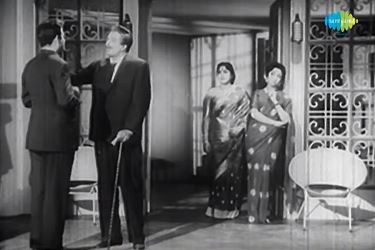 Next day, however, Sharda [who goes to Sharda College, of course] has changed her tune. She’s interacted with Vijay and has realized just how clever and wise and in all ways good he is. Her gushing is quite evident, and Mr Dubey, if he had been perceptive, would have had alarm bells ringing in his head vis-à-vis that Sharda-Shankar jodi he’s had in mind.

Sure enough, within a matter of days, Sharda and Vijay are an item, going skipping about the hills and singing love songs. They’re so pyaar-kiya-toh-darna-kya that they make no attempt at being discreet. As a result, soon the entire college knows, and when Mr Dubey happens to come by, he sees graffiti about Sharda and Vijay all across the walls [truth to tell, he doesn’t just see it; he’s shown it, by dozens of gloating male students].

Mr Dubey sees red. He goes home and lambastes Sharda, who is distressed but refuses to budge. She says that she will only ever marry Vijay. 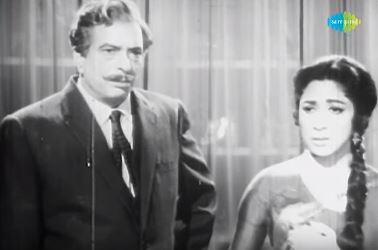 Lots of drama now ensues. Sharda runs away to Vijay, begging him to elope with her. Vijay, principled man that he is, refuses to do something so unethical, and when she refuses to go back to her own home, he takes her to Vidya Ratan’s. Vidya Ratan is a refreshingly broad-minded, calm and practical man. He phones Mr Dubey, and when the man arrives, reasons with him, trying to tell him why he shouldn’t come in the way of Sharda and Vijay’s wedding.

Sharda cries but stands steady; her father resorts to emotional blackmail; Vidya Ratan loses his temper and tells Mr Dubey to stop being such a creep. The long and the short of it all is that finally Vijay’s mother and Uma arrive, and Vijay and Sharda are married.

Sharda takes one look at the vast amount of dowry that’s been set out, ready to be packed for her [there is literally tons of silver here, and real silver too—the name of the jeweller appears in the credits]. And she refuses it all. She tells her mother that she will go to her sasuraal in what her in-laws have given her: a mangalsutra, and a sari and blouse borrowed from Uma [Hmm. What about other essential items of clothing she must be wearing—a petticoat not being the least of them?]

Mr Dubey didn’t even attend the wedding—Vidya Ratan had just about persuaded him to do so, but a message from Shankar, to say that he’s arriving the day after, riled him up all over again. Still seething and refusing to see off his beloved daughter, Mr Dubey however allows his wife a glimpse of just how he feels about letting Sharda go like this. He’s hurting, and pining for his girl, but his pride comes in the way.

In Sharda’s new home, though there’s none of the luxury of her maika, it’s not as if they’re piss-poor either. Just minutes after they step into the house, the principal (David) of a local college arrives, with the offer of a job for Vijay: he’s received a letter from Vidya Ratan, who has spoken highly of Vijay. Vijay accepts with alacrity, and everybody is very relieved.

Some days pass. Sukhi Ram and Uma get married, mostly by subterfuge and some nimble mangalsutra-pehnaoing by Sukhi Ram to evade his hawk-eyed father.

Sharda and Vijay haven’t had their suhaag raat yet—it’s going to be an occasion, with Sharda’s father being invited [I assume to a feast to be held before the more intimate aspects of the event]. As it happens, on the day chosen for the suhaag raat, the golden jubilee celebrations of the college are being held; Vijay, who’s in charge of various tasks connected to it—such as putting up banners—goes up on the roof to supervise…

… and falls off the roof.

He’s not badly injured, or so the doctor says. There’s no danger to his life. But there’s one problem: the fall has affected Vijay’s heart. So badly that any extreme exertion—such as—umm, trying to be a father [that’s how the doctor coyly puts it, instead of baldly saying “having sex”] can have fatal consequences [and this isn’t supposed to qualify as ‘danger to life’? Huh?]

This has been said to a mixed bag of people, including Sharda, Vijay’s mother, Sharda’s parents, Vijay’s current boss, etc. Vijay himself is absent from this earth-shattering revelation, which sends Sharda’s father into another fit of rage (thankfully not in front of Vijay’s mother). Vijay’s mother is heartbroken, and cannot find words to tell Vijay. So she tells Sharda also to not tell him. Not now. Someday, somehow, but not now.

Which is going to cause problems galore, because a man married to the woman he loves, whom he’s aching to make his wife in every sense of the word, and who believes he’s perfectly well, can hardly be expected to stay celibate. Complications arise. 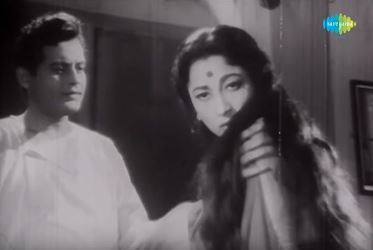 The unusually ‘bold’ topic of the film. Hindi cinema, till even much later than the 60s, made sex out to be something very hush-hush, something dirty and not to be spoken about or thought of even if one was married to the person one was sleeping with (or, as in this case, was supposed to be sleeping with). Unlike so many other films which would almost have you believe that all husbands and wives ever do is hug or sing romantic songs, Suhaagan makes no bones about the fact that sex is a critical part of the relationship—and what happens when sexuality is forced to be repressed. The frustration, the want, the helplessness, the anger that comes boiling out.

Interestingly (and that’s another thing I appreciated about this film), it’s not as if the focus is only on the sexuality of the man. Vijay, trying every ploy to consummate his marriage, is frustrated; but even more frustrated is Sharda, who wants him as much as he wants her, and who knows (unlike Vijay) that this isn’t a matter of time; it’s not as if, just because Maaji is at home today or Sharda is not feeling well tomorrow, they can get between the sheets another day… she knows that this can never be.

Also, I liked the very welcome breaking of the mother-in-law trope when it came to Vijay’s mother. Leela Chitnis’s character is loving and devoted to her son, but her love for her daughter-in-law is no less. She is kind, she is gentle, and she understands what Sharda is going through. Understands, empathizes, listens to, and tries to help. Of all the roles in which I’ve seen and remembered Leela Chitnis, this is the best.

Madan Mohan’s music is good, though not as uniformly stellar a score as most of his films. For me, two songs stood out: Tu mere saamne hai teri zulf hai khuli, and Bheegi chaandni chhaayi bekhudi.

The end, which I thought was a little too predictable. The lead-up to the end was surprising and very unusual, but the end itself: I expected better. Though I wonder what else, logically, it could have been.

And yes, the melodrama went too over the top at times. Mala Sinha, whom I generally like, was just too highly strung here (I can see why, considering the trials her character has to go through), but a more contained performance might have appealed to me more.