One of the last living legends of Hollywood has gone. Kirk Douglas passed away on February 5th, at the age of 103. A ripe old age, and a life that seems to have been as heroic as the characters he portrayed onscreen. Kirk Douglas grew up in a Jewish ghetto as the son of immigrants from what is now Belarus; his athleticism (he became a professional wrestler at an early age) was what eventually helped him pay for an education and go on to win a scholarship at the American Academy of Dramatic Arts. Douglas’s acting career (on stage, at the time) was interrupted by the outbreak of World War II, and he, having enlisted in the US Navy, did not return to theatre until ceasefire in 1945.

The post-war period also resulted in a breakthrough into cinema for Douglas, leading him to his first role, in The Strange Love of Martha Ivers (1946). From this point onwards, there was no looking back: over the next 60 years, he acted in many films, some of them landmarks in the history of cinema, like Lust for Life, Spartacus, and Paths of Glory. Besides his impressive acting career, Douglas was also involved in various humanitarian causes, donating funds for causes as diverse as a children’s hospital and a television and motion picture fund.

As tribute, therefore, to Kirk Douglas, my review of one of his most famous films, a sword-and-sandals epic about a rebellious (real life) slave.

END_OF_DOCUMENT_TOKEN_TO_BE_REPLACED

For someone who loves books with as much passion as she does old cinema, it’s hardly surprising, perhaps, that I get especially excited when I discover a screen adaptation of a book I like—or vice-versa.

Earlier this year, I stumbled upon Kenneth Fearing’s novel The Big Clock. I had never heard of it before, and the first couple of chapters of the book didn’t endear me to it: too dry, too full of journalistic jargon, too business-y. But I persevered, and suddenly, the story took a turn that caught me by surprise. And then it became such a gripping, unputdownable book that I ended up racing through it, eager to see where it would go.

… which was why, when I found it had been also made into a film, I approached the cinematic The Big Clock with some trepidation: would they have been able to do justice to it?

As it turned out, yes. More than justice. 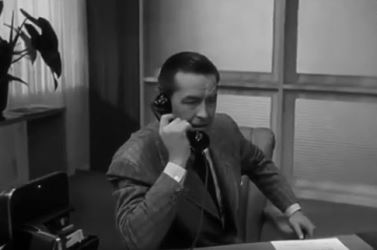 END_OF_DOCUMENT_TOKEN_TO_BE_REPLACED

The other day, someone commented on my long-ago list of ten favourite Robert Mitchum roles. It reminded me that I hadn’t watched a Mitchum film in a long, long time (unpardonable, considering he’s one of my favourite actors). And, since Mitchum’s role as the chilling Harry Powell in The Night of the Hunter is one of the landmark roles of his career—well, it did seem appropriate to review the film. 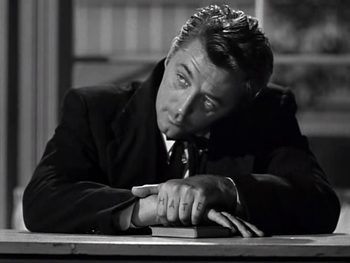 END_OF_DOCUMENT_TOKEN_TO_BE_REPLACED

This is one of the few Hitchcock films I didn’t see in my younger years. And, considering that Hitchcock is one of my favourite directors, and Gregory Peck one of my favourite actors, that is odd indeed. Perhaps I should put it down to the fact that The Paradine Case is not one of Hitch’s best-known works; in fact, he more or less washed his hands off it. And Peck, too, seems to have not really liked it.

END_OF_DOCUMENT_TOKEN_TO_BE_REPLACED

“The trial of of Leonard Vole for the murder of Emily French aroused widespread interest. In the first place the prisoner was young and good-looking, then he was accused of a particularly dastardly crime, and there was the further interest of Romaine Heilger, the principal witness for the prosecution…” — Agatha Christie, The Witness for the Prosecution

Tyrone Power’s last full-length appearance on screen (he died while filming Solomon and Sheba a year later), Witness for the Prosecution is also one of his most famous films. Surprisingly, not mainly because of Power—his role in it, though pivotal, is actually quite small—but because of the overall brilliance of the film: the excellent acting, Billy Wilder’s direction, and a very good adaptation of one of Agatha Christie’s best-known short stories. 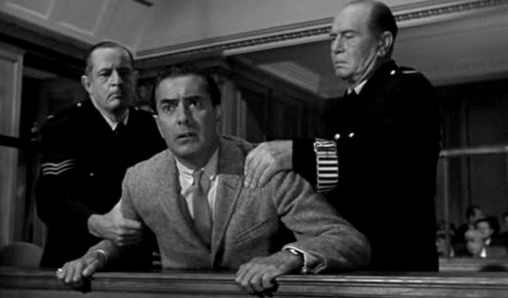 END_OF_DOCUMENT_TOKEN_TO_BE_REPLACED

Easter’s here once again, so a review of a film with a biblical theme seemed in order.

END_OF_DOCUMENT_TOKEN_TO_BE_REPLACED

David Lean, talking about Mitchum, once said, “Mitchum can, simply by being there, make almost any other actor look like a hole in the screen.”